+1 point
Thank you for your contribution! You can also upload a video entry related to this topic through the link below: https://encyclopedia.pub/user/video_add?id=22241
Check Note
2000/2000
Electronic Structure of TiNCl

Layered metal nitride halides MNX (M = Ti, Zr, Hf; X = Cl, Br, I) have two polymorphs, including α- and β-forms, which have the FeOCl and SmSI structures, respectively. These compounds are band insulators and become metals and show superconductivity after electron doping by intercalating alkali metals between the layers. The superconductivity of β-form had been extensively characterized from decades ago, but it is not easy to consistently interpret all experimental results using conventional phonon-mediated Bardeen–Cooper–Schriefer mechanisms. The titanium compound TiNCl crystallizes only in the α-form structure. TiNCl also exhibits superconductivity as high as ~16 K after electron doping by intercalating metals and/or organic basis. It is important to compare the superconductivity of different M–N networks. However, α-form compounds are vulnerable to moisture, unlike β-form ones. The intercalation compounds are even more sensitive to humid air.

In order to understand the pairing mechanism of this possible exotic superconductor, it is important to clarify how electronic structure evolves with carrier doping. The band structure of pristine TiNCl has been calculated by first-principle calculations [1][2]. It exhibits a two-dimensional feature, with the general flatness of the band along the Ґ-Z direction perpendicular to the layers. The top valence band primarily has a N 2px character, and the lowest conduction band has a strong Ti 3dxy character [2]. There is 3d weight in the valence bands and N weight in the conduction bands, respectively, reflecting substantial N 2p—Ti 3d hybridization in addition to the ionic character reflected in their formal charges [2]. The β-form compounds have disconnected cylindrical Fermi surfaces favorable for nesting [3][4], while the electron-doped TiNCl has a single oval Fermi surface centered at the Ґ point [2]; the possible nesting between Fermi surfaces discussed for the β-form compounds should be excluded from TiNCl.
Several theoretical ideas are considered in arguing against phonon-mediated superconductivity. Yin et al. discussed the remaining possibilities of spin and charge fluctuations for the high-temperature superconductivity by constructing a many-body extended Hubbard model based on a realistic band structure calculation [2]. They reported that charge fluctuations might play an important role in superconductivity rather than spin fluctuations [2].
On the other hand, Kusakabe showed a criterion for superconductivity by a pair-hopping mechanism for potassium-doped TiNCl [5]. The super-pair hopping process of the spin is possible by providing the connecting orbitals between the two-dimensional electron systems. The locally formed cooper pair in a superconducting layer can be scattered from the neighboring layer via the high-energy intermediate state connecting the layers [5].
However, an electron–phonon mechanism may still be relevant for explaining the high Tc [6]. Yin et al. proposed that the Tc of TiNCl may also be well accounted for the electron–phonon mechanism using hybrid functional instead of local-density approximation (LDA) or generalized-gradient approximation (GGA) functionals in the first principles calculation [7].
In order to verify these theoretical studies, it is important to determine the electronic structure experimentally. A few experimental studies on the superconducting mechanism have been reported up to date. The reduced superconducting gap value 2Δ/kBTc has been determined from scanning tunneling microscopy/spectroscopy to be approximately 15 and 12 for KxTiNCl and NaxTiNCl, respectively [8][9]. The observed value is four times larger than the mean-field BCS value.
A photoemission spectroscopy (PES) study is the most suitable probe for observations in electronic structure, such as band dispersion. However, angle-resolved photoemission spectroscopy (ARPES) has not been achieved so far for both superconducting α- and β-forms. Although there are several reports of PES for β-form [10][11][12][13], the electronic structure studies using PES of neither the parent α-form compound nor the doped one have been reported. This problem is mainly due to the difficulty of synthesizing both the parent and the electron-doped α-form samples.

For the first data of the PES study in α-form samples, micro-photoemission spectroscopy (μ-PES) with highly focused synchrotron soft X-ray was performed by Kataoka et al. [14]. In the μ-PES, the angle integrated PES spectra corresponding to the electronic density of states (DOS) of the valence band of TiNCl and NaxTiNCl were observed[14]. The shape of the valence band of TiNCl roughly corresponds to that of band structure calculations. The peaks around 6 eV are hybridized states of Ti 3d, N 2p, and Cl 3p orbitals, and the 4 eV shoulder structure is dominated by the Cl 3p component [14].
The valence band spectrum of NaxTiNCl exhibits a peak at 6.5 eV, accompanied by an emergence of the metallic state near EF extending to 1.5 eV. The broad-spectrum has higher binding energy by 0.5 eV than the corresponding band of TiNCl, in line with the chemical potential shift expected from electron doping. However, the new structure at EF extends to 1.5 eV, contradicting a study that reported the shape of the valence and conduction band is similar to that of TiNCl [1]. It is difficult to explain the observed valence band structure of NaxTiNCl, especially the spectral structure near EF, only by the rigid band shift of that of TiNCl.
An electronic band for the appearance of superconductivity is still unclear in this material. Researchers have to wait for the result of ARPES to clarify it, but at present, the presence of the fine structure required to exhibit superconductivity has been suggested from a PES study using hard X-ray [15]. TiNCl prepared by the above-mentioned synthetic route using NaNH2 appeared highly electron-doped, albeit without superconductivity. As an investigation of the origin, it became clear that there is a slight difference in Ti 2p. In comparing the core-level spectrum of Ti 2p with Na-intercalated samples, a fine structure around 455.5 eV emerges other than the shoulder-like component of the main structure of Na0.1TiNCl. Although the area of the fine structure is small, peak fitting can be performed reliably [15]. Researchers can see a small contribution of component D in the peak fitting of Na0.1TiNCl. However, it could not be observed in pristine non-superconducting samples even if it is in a highly electron-doped state. It did not appear unless the sample was Na-doped [15]. The difference in the preparation method changes the atmosphere during the synthesis. It may also change the hydrogen content of the resulting material. The electron doping in the TiNCl prepared by NaNH2 may be attributed to the hydrogen content, affecting the oxidation state. Moreover, in the measurement of valence band spectra, the intensity of EF and the area of component D in the doping dependence are correspondent. These findings suggest that even with the same electron doping, the electronic structure may change depending on the effective carrier insertion, determining whether or not superconductivity appears. Overall, component D seems to be a necessary structure for the appearance of superconductivity.

In the β-form MNX, the carrier control has also been performed by off stoichiometry or deintercalation of X [16]. Since TiNCl is easily thermally decomposed into TiN by annealing [17][18][19], such a carrier control is challenging, but irradiation of soft X-rays can achieve the metalization [20].
In the time courses of soft X-rays irradiation, the peak area of Ti4+ in the Ti 2p core-level spectrum decreased with the irradiation time, and the intensity of the shoulder structure also increased gradually. The intensity of the Cl 2p spectrum after the soft X-ray irradiation decreased gradually, which suggests the irradiation induces the desorption of Cl atoms from the surface [20]. As a result, a clear Fermi edge structure was observed in the valence band spectrum after 150 min irradiation suggesting the metallic nature of the measured region of the sample surface[20].
Figure 1 shows the temperature dependence of magnetic susceptibility of the pristine and irradiated samples. A weak diamagnetic signal was observed around 2 K in the pristine sample. The signal is attributed to that from TiN appearing by decomposition of TiNCl. Apart from the TiN, researchers can see that the other small diamagnetization near 14 K in the sample irradiated with soft X-rays for 30 min in the beam diameter region of ~20 μm (denoted as A). The signal becomes large when the area is expanded to about 0.5 × 0.5 mm2 by repeating irradiation for 3 min (denoted as B). When the decomposition of TiNCl is promoted by the irradiation, the TiN content increases, which appears as a two-step transition resulting in the enhancement of the total shielding volume fraction. 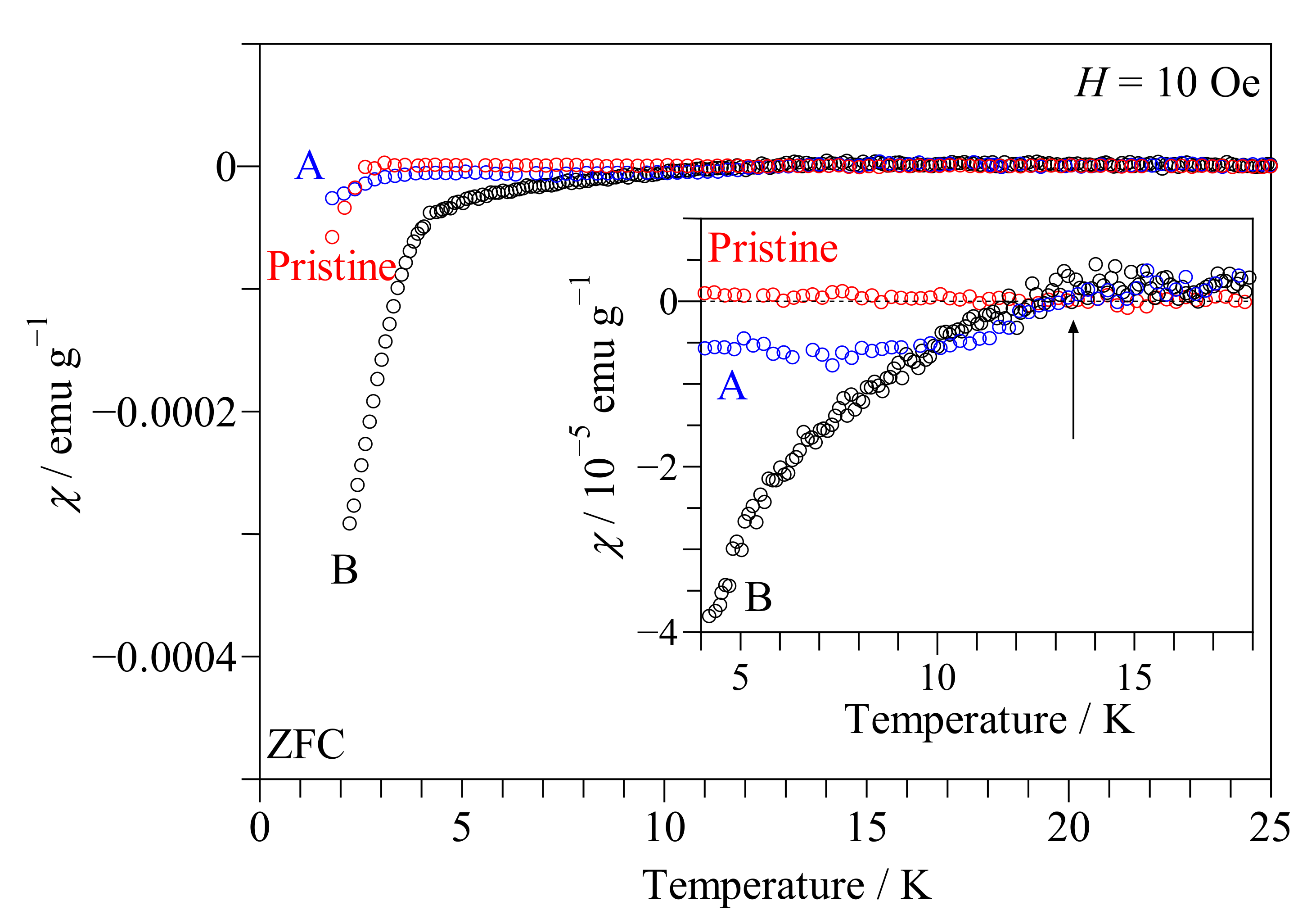 Figure 1. Temperature dependence of magnetic susceptibility in the zero-field-cooling mode of pristine TiNCl compared with soft X-ray irradiated samples. The irradiation conditions are: (A) 30 min in beam spot area, (B) 0.5 × 0.5 mm2 by repeating 3 min irradiation. The pristine sample did not show any specific magnetic behavior except for a tiny contribution of TiN below 5 K. The irradiated samples showed a weak diamagnetic signal around 14 K. The inset shows the enlargement scale.
On the other hand, it should be noted that the volume fraction at 5 K, which is above the Tc of TiN, becomes several times larger, as shown in the inset of Figure 1. These facts suggest that the surface region irradiated with soft X-rays is electron-doped by Cl deintercalation and becomes metallic and superconducting.

More
© Text is available under the terms and conditions of the Creative Commons Attribution (CC BY) license; additional terms may apply. By using this site, you agree to the Terms and Conditions and Privacy Policy.
Upload a video for this entry
Information
Subjects: Materials Science, Characterization & Testing
Contributor MDPI registered users' name will be linked to their SciProfiles pages. To register with us, please refer to https://encyclopedia.pub/register :
Masashi Tanaka
View Times: 165
Revisions: 2 times (View History)
Update Date: 26 Apr 2022
Table of Contents
1000/1000
Hot Most Recent