+1 point
Thank you for your contribution! You can also upload a video entry related to this topic through the link below: https://encyclopedia.pub/user/video_add?id=21774
Check Note
2000/2000
Characterization of the Oxidation Products of Lipids

Phototrophic organisms (mainly green plants, algae, cyanobacteria and some protists) carry out photosynthesis that is, conversion of sunlight energy, carbon dioxide and water into organic materials. Due to the generation of highly reactive oxygen species (ROS) during photosynthetic electron transport, these organisms are particularly sensitive to oxidative damages. Lipids (hydrocarbons, pigments, terpenoids, free fatty acids, acylglycerides, phospholipids, galactolipids, cutins, suberins and waxes) are important components of phototrophic organisms, accounting for 16–26% of organic content in phytoplankton and up to 45% in the green alga Botryococcus Braunii.  The applications of gas chromatography-mass spectrometry techniques for the characterization of photooxidation and autoxidation products of unsaturated lipids of senescent phototrophic organisms will be introduced.

Attack of 1O2 on the tri-substituted double bond of the chlorophyll phytyl side-chain affords two allylic hydroperoxides, which may be recovered in the form of 6,10,14-trimethylpentadecan-2-ol and 3-methylidene-7,11,15-trimethylhexadecan-1,2-diol (phytyldiol) after NaBH4 reduction and alkaline hydrolysis [1] (Scheme 1). The stable and highly specific phytyldiol was proposed as biogeochemical marker of chlorophyll photodegradation in the natural environment [2]. In contrast, free radical oxidation (autoxidation) of chlorophyll phytyl side-chain and subsequent reduction and hydrolysis gives 3,7,11,15-tetramethylhexadec-3-en(Z/E)-1,2-diols, 3,7,11,15-tetramethyl-hexadec-2-en(Z/E)-1,4-diols and 3,7,11,15-tetramethyl-hexadec-1-en-3-ol (isophytol) [3][4] (Scheme 1). These compounds have been proposed as specific tracers of chlorophyll phytyl side-chain autoxidation in environmental samples [3][4]. 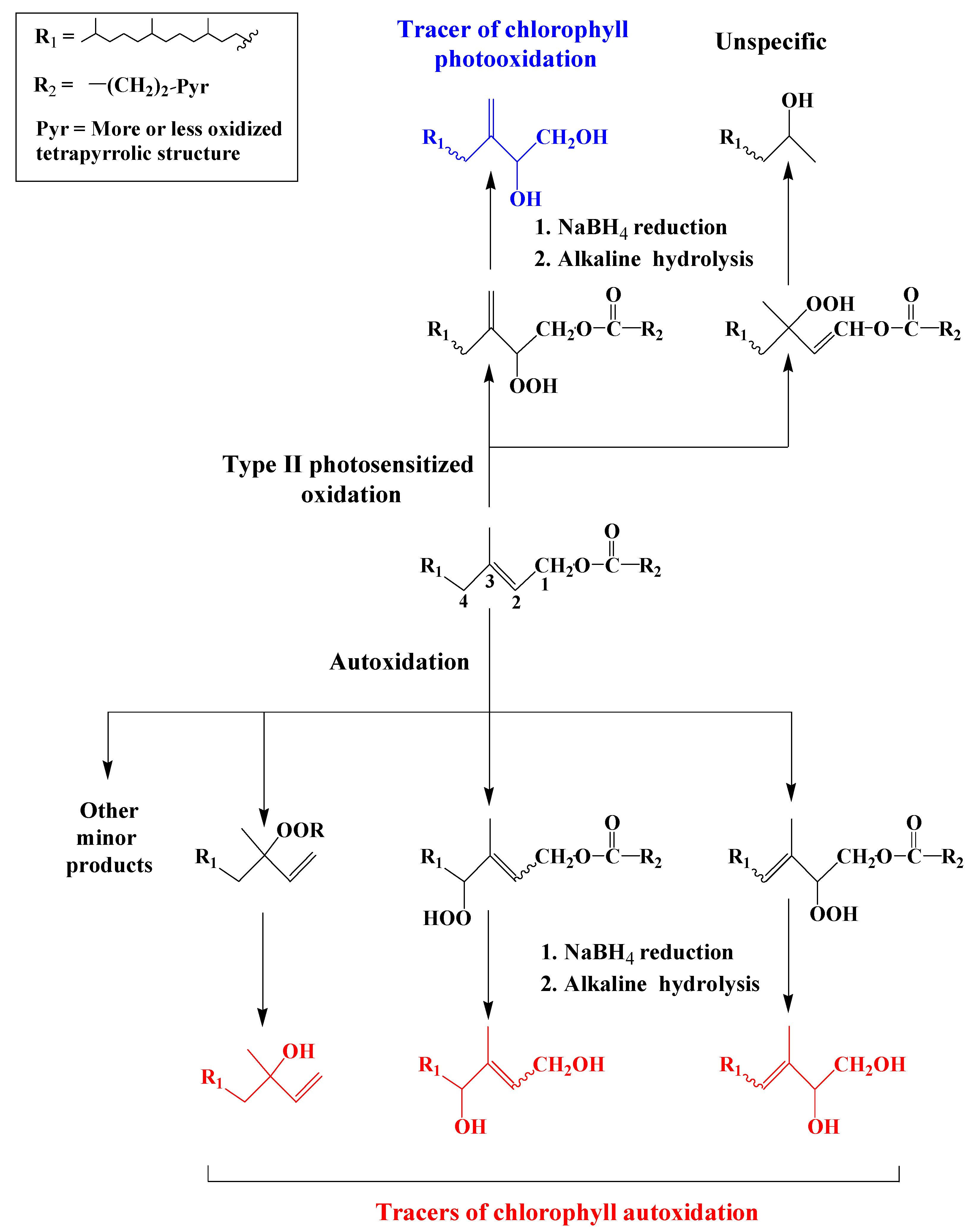 Scheme 1. Photooxidation and autoxidation of chlorophyll phytyl side-chain.
TOF mass spectra of the TMS derivatives of phytyldiol and 3,7,11,15-tetramethylhexadec-3-en(Z/E)-1,2-diols show intense and specific fragment ions at m/z 353.3235 resulting from classical α-cleavage between the carbon atoms 1 and 2 bearing the two TMS ether groups [5], while the spectra of TMS derivatives of 3,7,11,15-tetramethyl-hexadec-2-en(Z/E)-1,4-diols are dominated by a fragment ion at m/z 245.1388 corresponding to α-cleavage between carbon atoms 4 and 5 (Scheme 2). 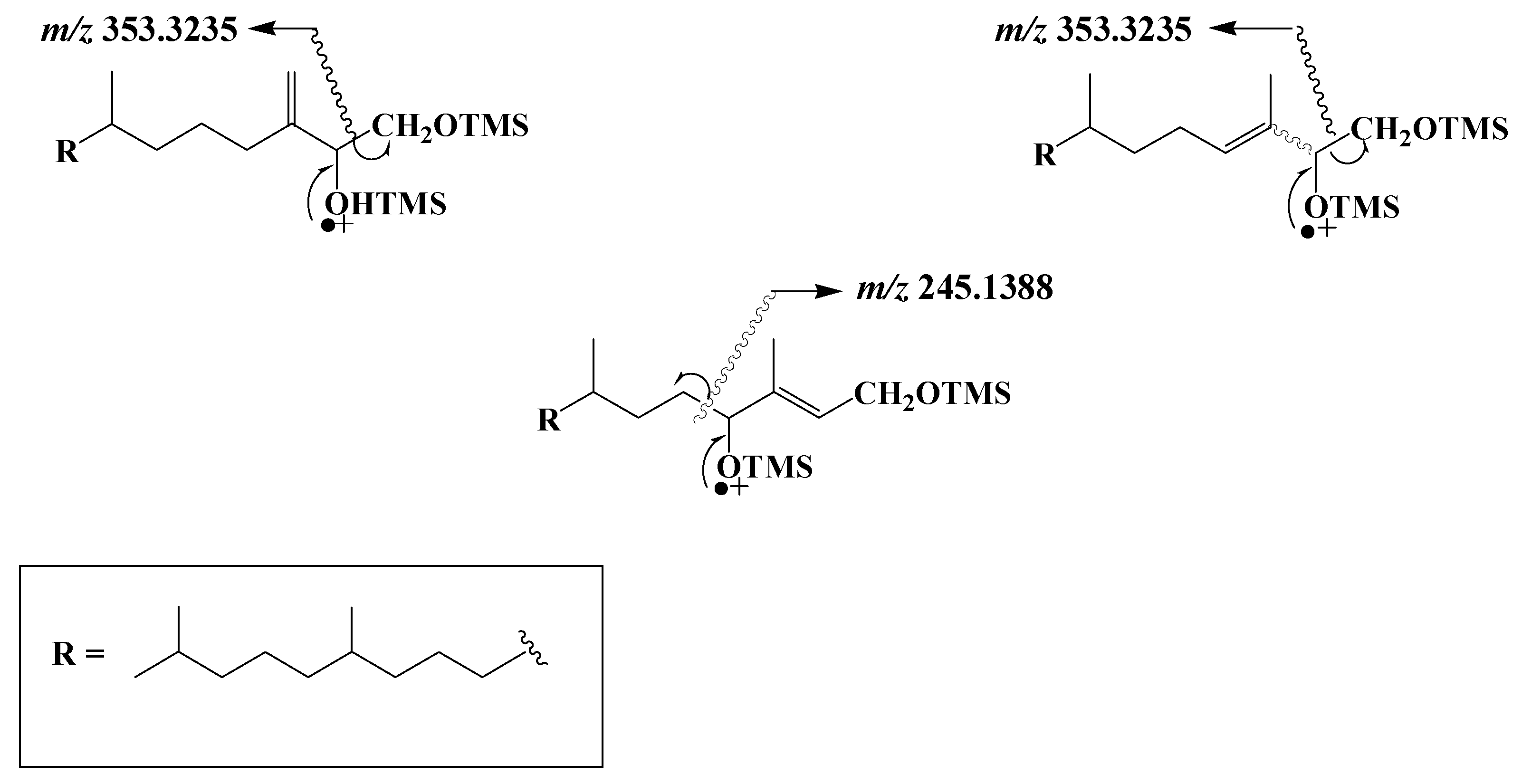 Scheme 2. Main EI mass fragmentations of TMS derivatives of phytyldiol, 3,7,11,15-tetramethylhexadec-3-en(Z/E)-1,2-diols and 3,7,11,15-tetramethyl-hexadec-2-en(Z/E)-1,4-diols.
Note that the loss of a methyl radical by the molecular ion of TMS derivatives of phytol and isophytol also affords a fragment ion at m/z 353.3235. Monitoring ions at m/z 353.3235 and 245.1388 thus allows simultaneous characterization and quantification of phytol and its main photooxidation and autoxidation products in natural samples (see example given in Figure 1). 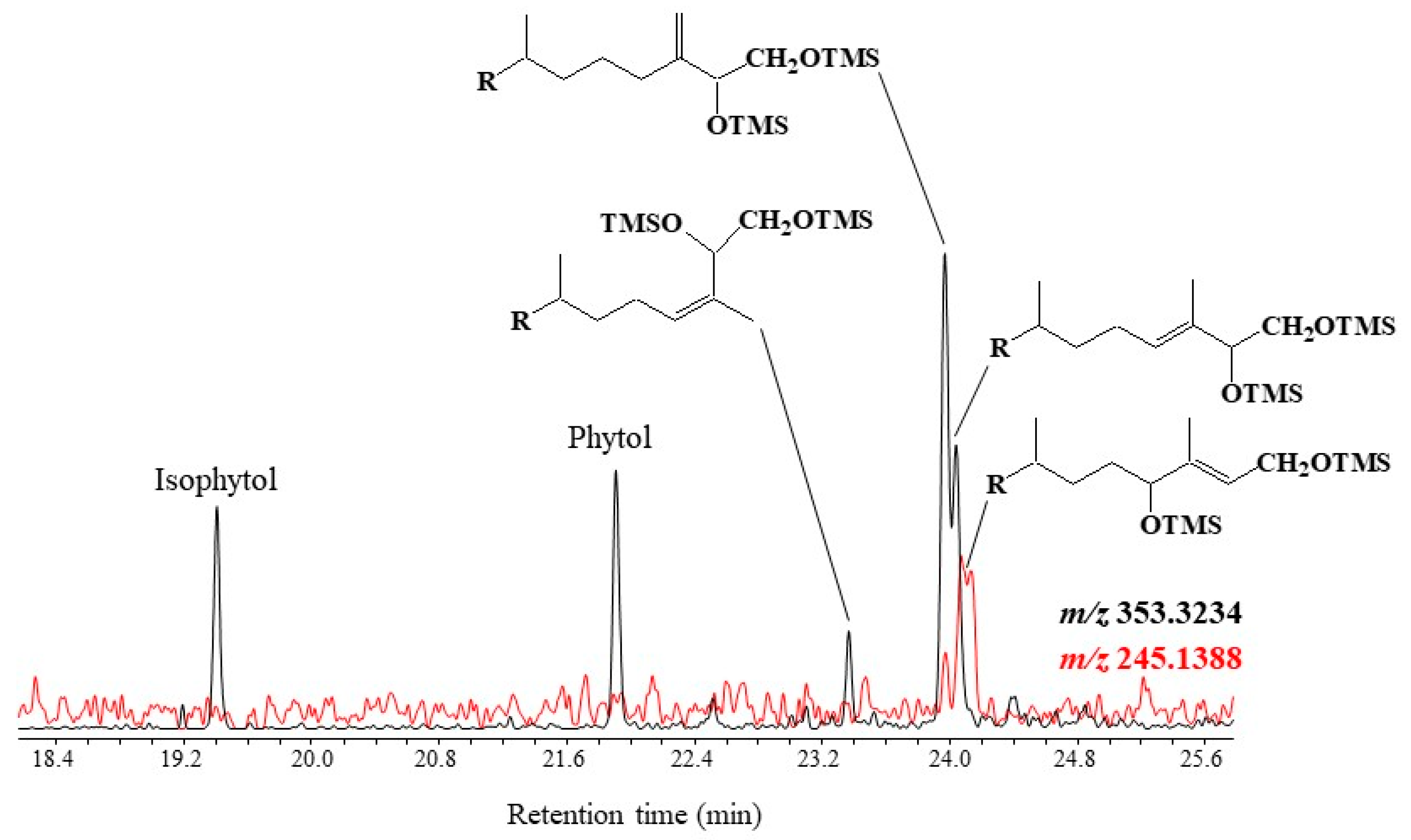 Figure 1. Partial TOF ion chromatograms (m/z 353.3235 and 245.1388) showing the presence of TMS derivatives of phytol and its main photooxidation and autoxidation products in senescent cells of the diatom Thalassiosira sp. 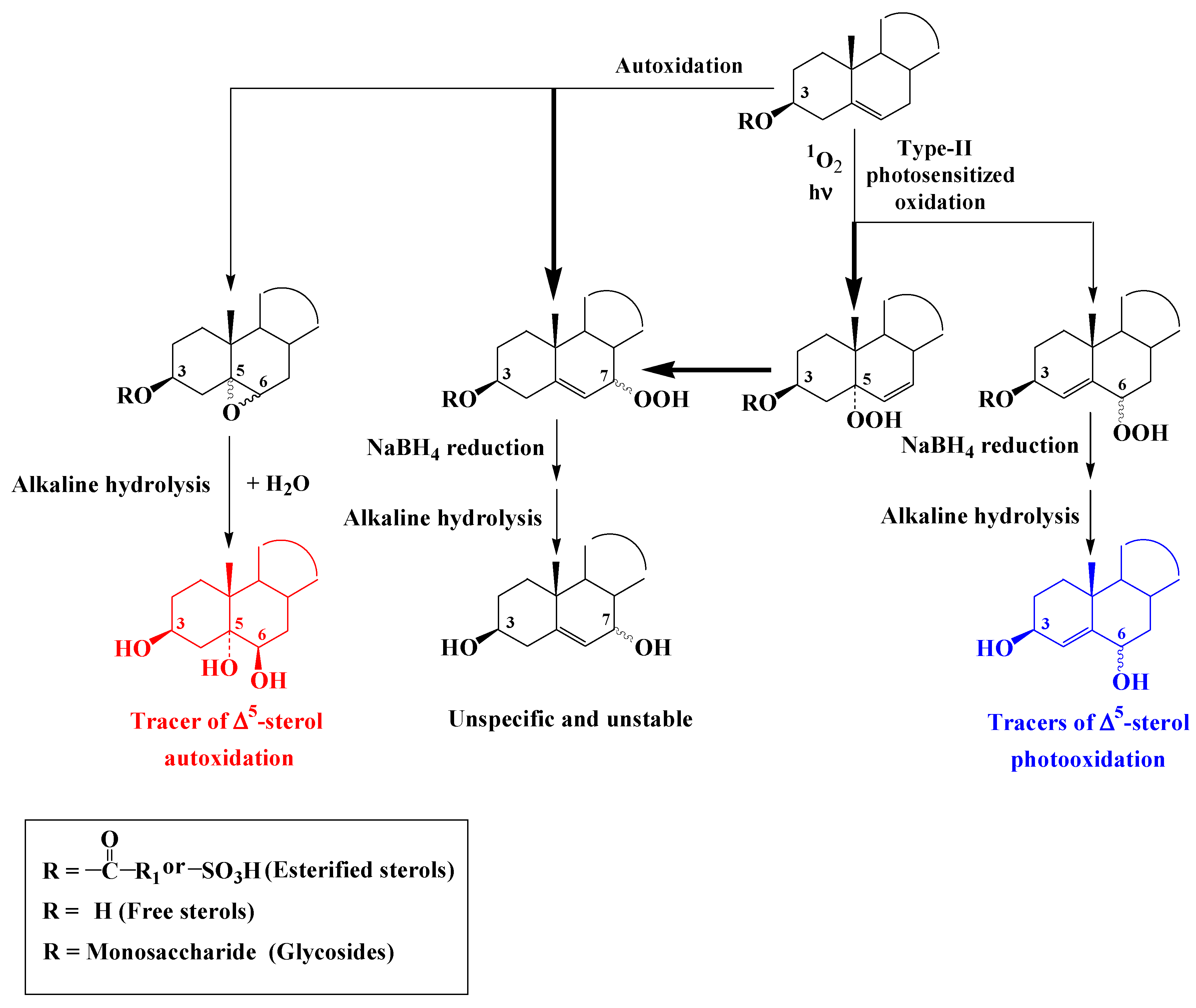 Scheme 3. Photooxidation and autoxidation of ∆5-sterols.
Autoxidation of ∆5-sterols mainly affords unstable and unspecific 7α/β-hydroperoxides after hydrogen atom abstraction at the allylic carbon atom 7 [10]) (Scheme 3). Smaller proportions of isomeric 5α,6α- and 5β,6β-epoxysterols are also produced after addition of peroxyl radical to the double bond [11] (Scheme 3). Stable and specific 3β,5α,6β-trihydroxysterols resulting from the hydrolysis of these epoxides during alkaline hydrolysis and in environmental conditions were proposed as specific tracers of the autoxidation of ∆5-sterols [8][9].
TOF mass spectra of ∆4-stera-3β,6α/β-diol TMS derivative exhibit an intense and interesting fragment ions at [M − 143.0887]+ resulting from double bond ionization and subsequent hydrogen migrations and cleavages of the C1–C10 and C4–C5 bonds [12] (Scheme 4). Due to steric hindrance, the classical silylation reagents only silylate 3β,5α,6β-trihydroxysterols to their 3 and 6 positions [13], and during ionization their TMS derivatives very easily lose a neutral molecule of water and thus exhibit mass spectra that are very similar to those of ∆4-stera-3β,6β-diol TMS derivatives (Scheme 4). 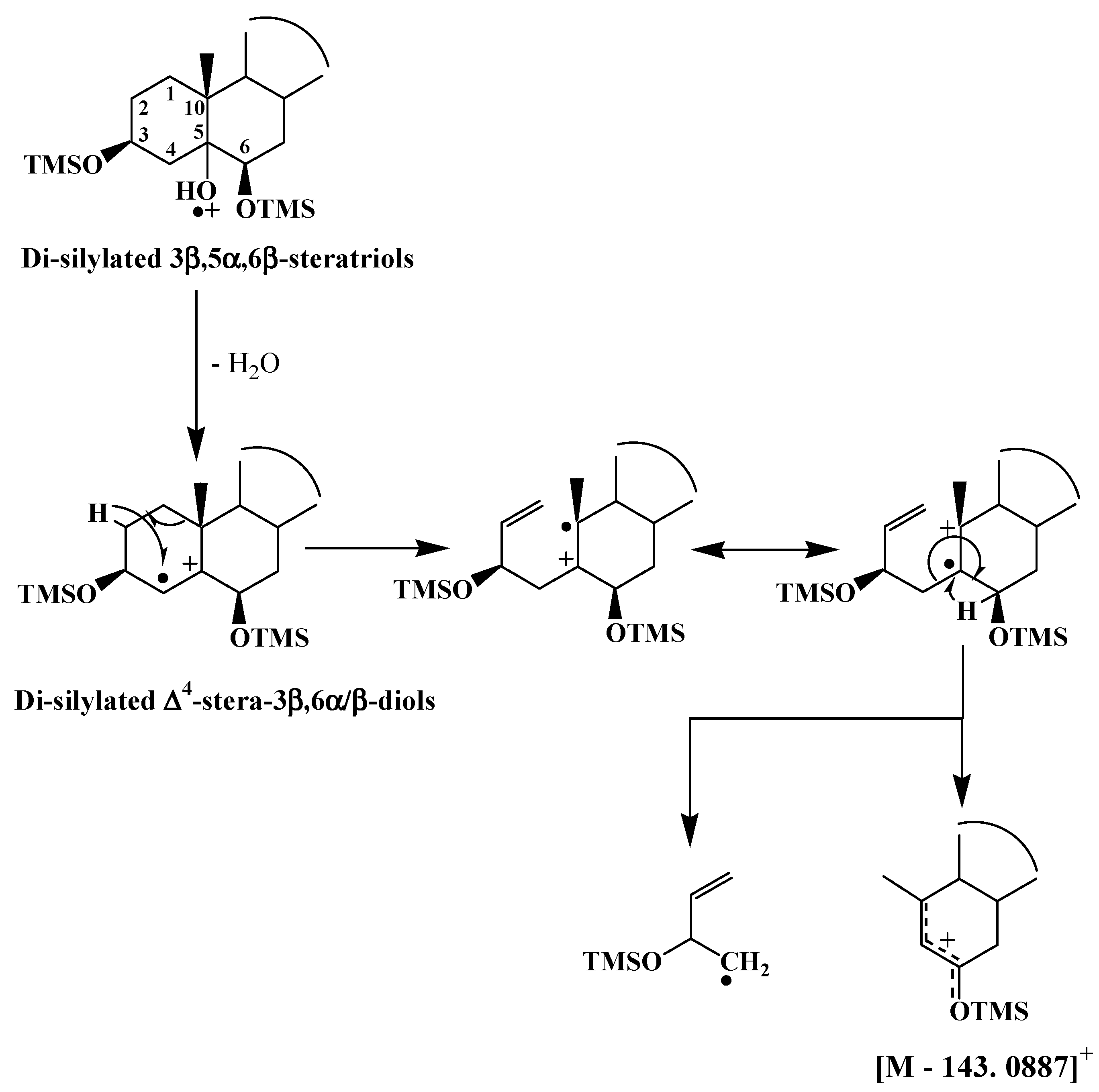 Type II photosensitized oxidation and autoxidation rates of unsaturated fatty acids logically increase with their number of double bonds [14][15]. Unfortunately, oxidation products of the more reactive polyunsaturated fatty acids (PUFAs) are not sufficiently stable under environmental conditions to be used as tracers of these degradation processes in situ. Note that isoprostanoids (cyclopentane-containing oxylipins) resulting from autoxidation of C18, C20 and C22 PUFAs are often used as biomarkers for in vivo oxidative stress in animals and plants [16]. These compounds could be detected in higher plants and algae by using GC–MS in negative-ion chemical ionization (NICI) mode [16][17]. However, in the literature there are no reports of such compounds in environmental samples.
GC-QTOF allows a clean characterization and quantification of TMS derivatives of MUFA oxidation products in autotrophic organisms and environmental samples. Figure 2 gives some examples of the technique application showing typical profiles of visible light-induced, (visible + UV) light-induced and autoxidative degradation products. 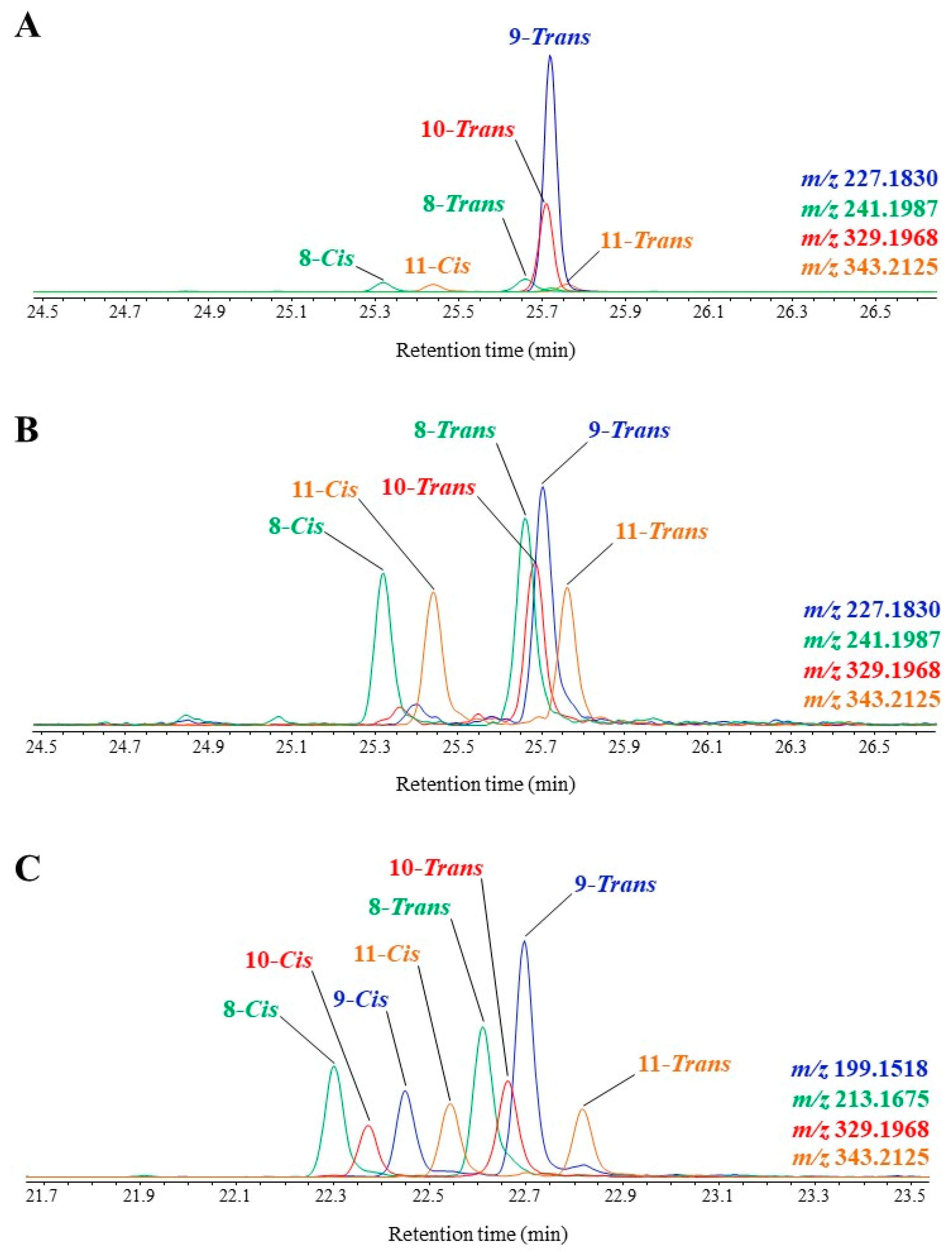 Figure 2. Partial TOF ion chromatograms showing TMS derivatives of oleic acid oxidation products in senescent cells of the haptophyte Emiliania huxleyi irradiated by visible light (A), and after aging (B), and of palmitoleic acid in the diatom Thalassiosira sp. irradiated by (visible + UV) light (C).
MRM analyses of TMS derivatives of MUFA oxidation products involve intense and selective transitions from the ions resulting from α-cleavage (precursor ions) to the fragment ion at m/z 129 (product ion). Note that this transition is more efficient with precursor ions containing the terminal methyl group than with precursor ions containing the TMS ester group, which can easily lose neutral TMSOH molecules (Figure 3). Figure 4 gives an example of how MRM analyses can be applied. 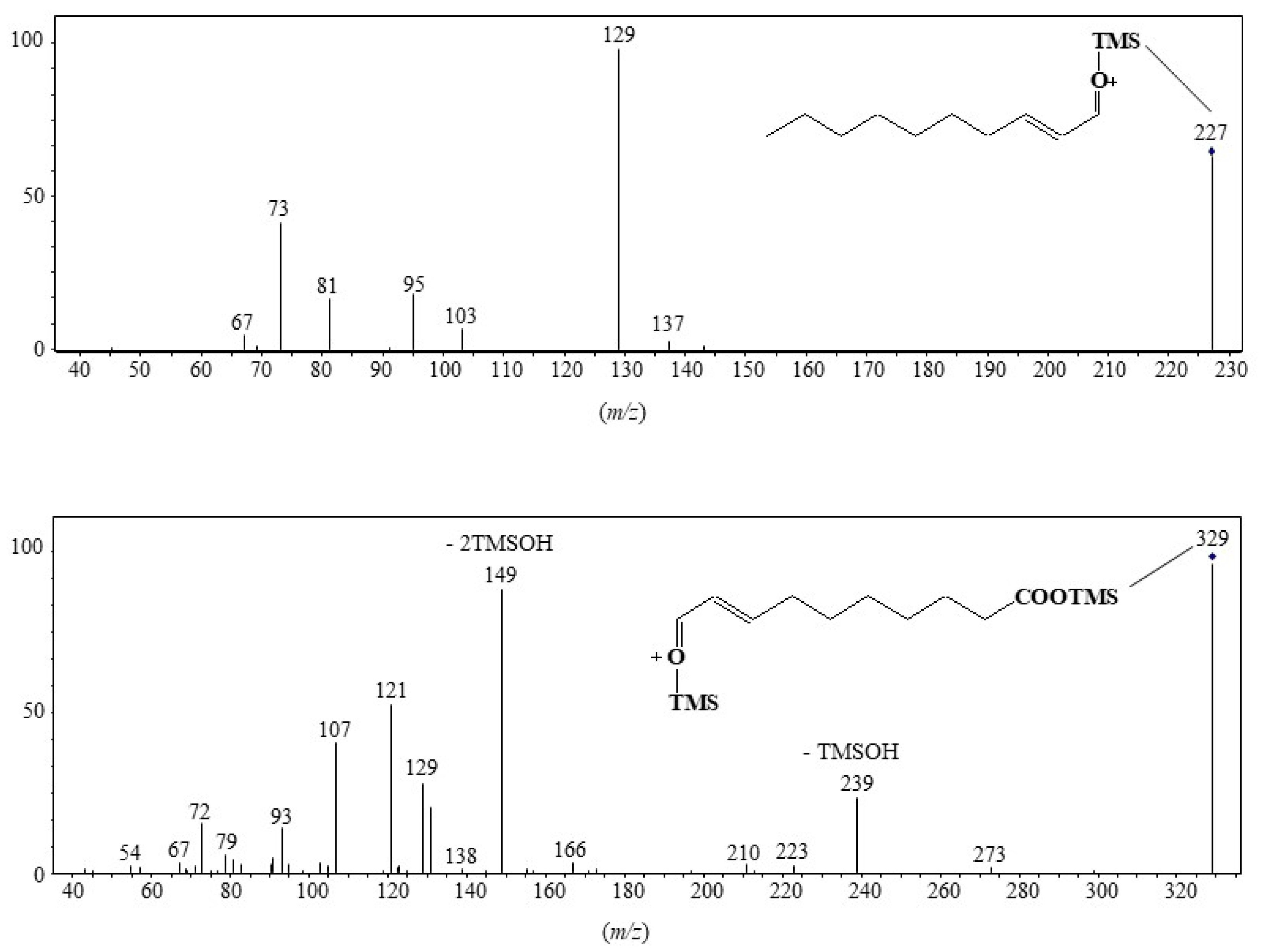 Pentacyclic triterpenes and their derivatives, which are widely found in angiosperms [18], are divided into three main classes, that is, lupanes, oleananes and ursanes. 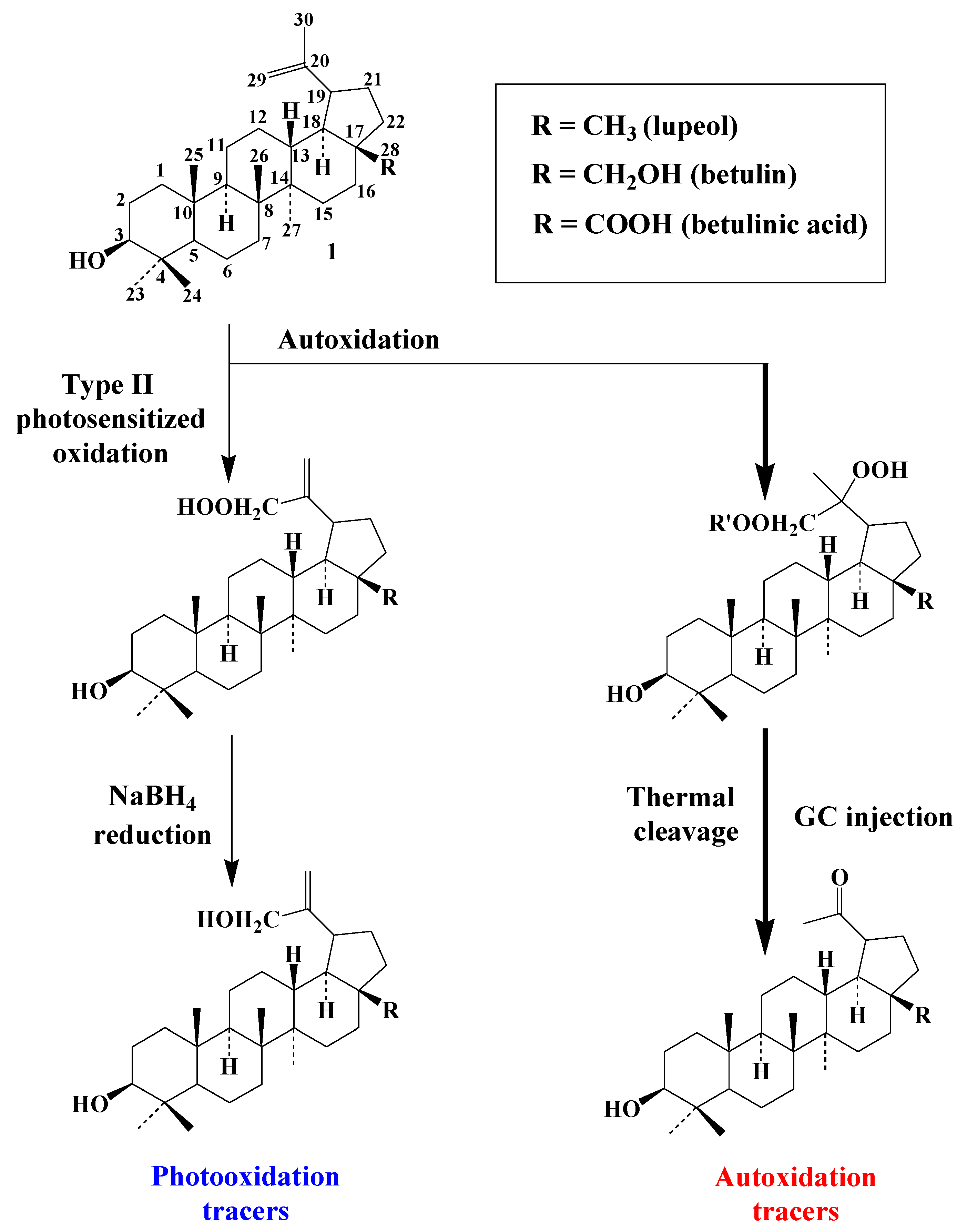 Scheme 5. Photooxidation and autoxidation of lupanes.
The EI mass spectra of the TMS derivatives of lup-20(30)-ene-3β,28,29-triol and lupan-20-one-3β,28-diol exhibit intense fragment ions at m/z 481.3860 and m/z 395.3305, respectively, whose formation involves elimination of a neutral molecule of TMSOH and subsequent loss of the CH2OTMS group borne by the carbon 28 [19] (Scheme 6). These fragment ions make good candidates for monitoring type-II photosensitized oxidation and autoxidation of betulin, respectively, in environmental samples. As the formation of these ions involves the loss of the group borne by carbon 28, they can be also used as tracers of the oxidation of lupeol and betulinic acid. Figure 5 gives an example of the specific fragment ion at m/z 395.3305 applied for monitoring lupane autoxidation in environmental samples. 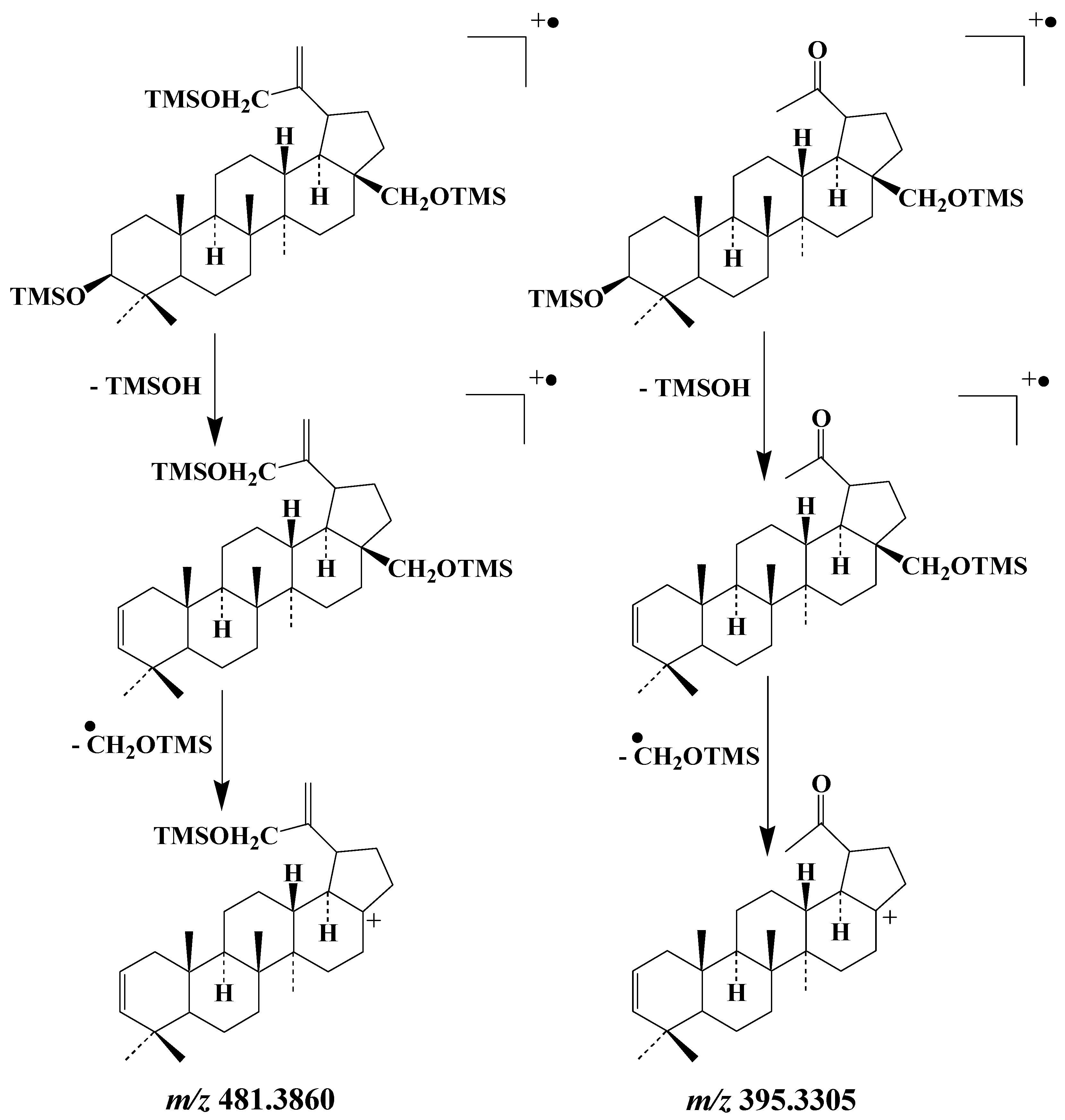 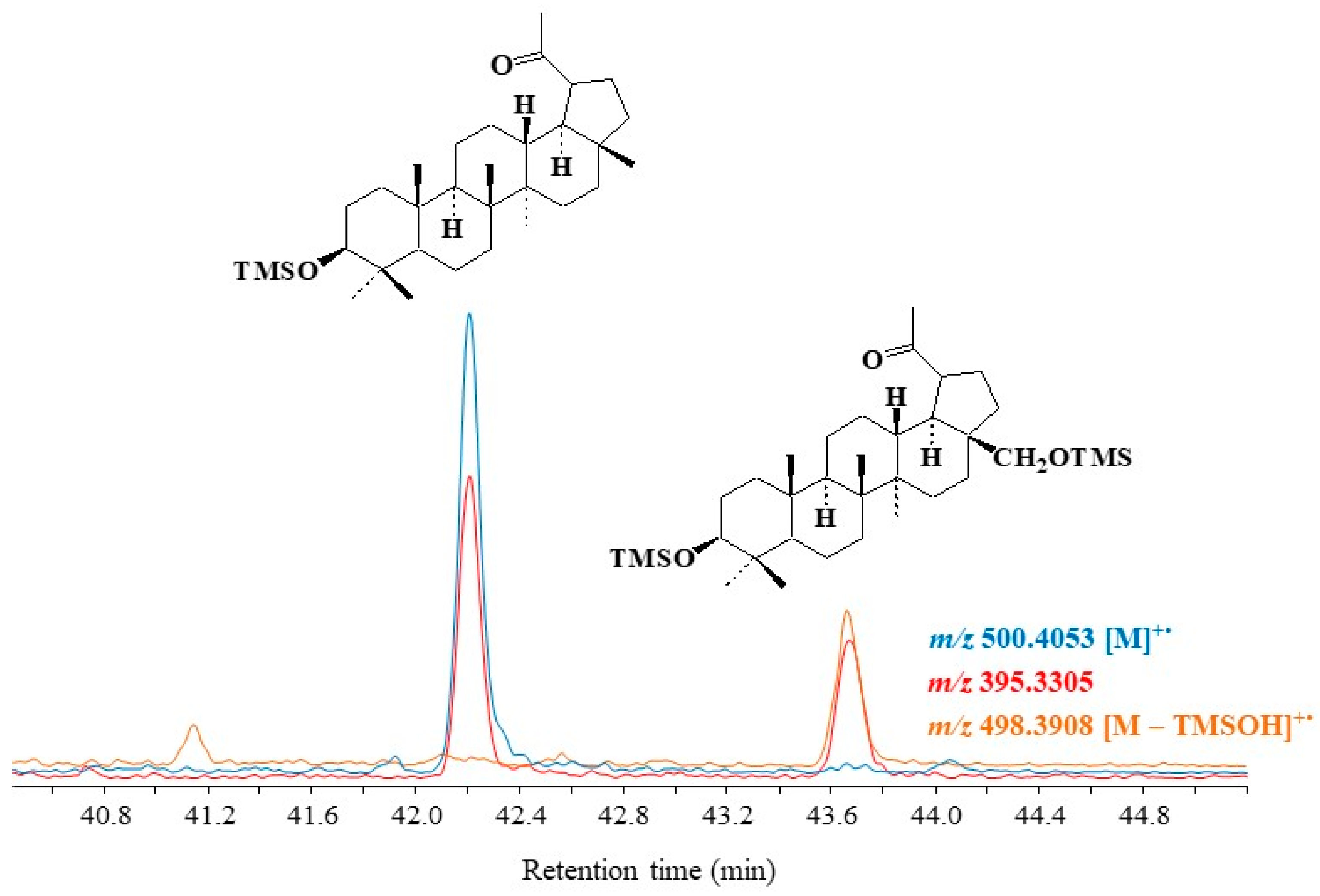 Studies on type II photosensitized oxidation and autoxidation of ursanes and oleanes have mainly focused on α- and β-amyrins [20]. α- and β-amyrins were found to be totally unaffected during photodegradation experiments, due to steric hindrance preventing 1O2 reaction with their double bond [20]. Autoxidation of amyrins mainly involves hydrogen abstraction and specifically produces 11α-hydroperoxyamyrins [20] (Scheme 7). 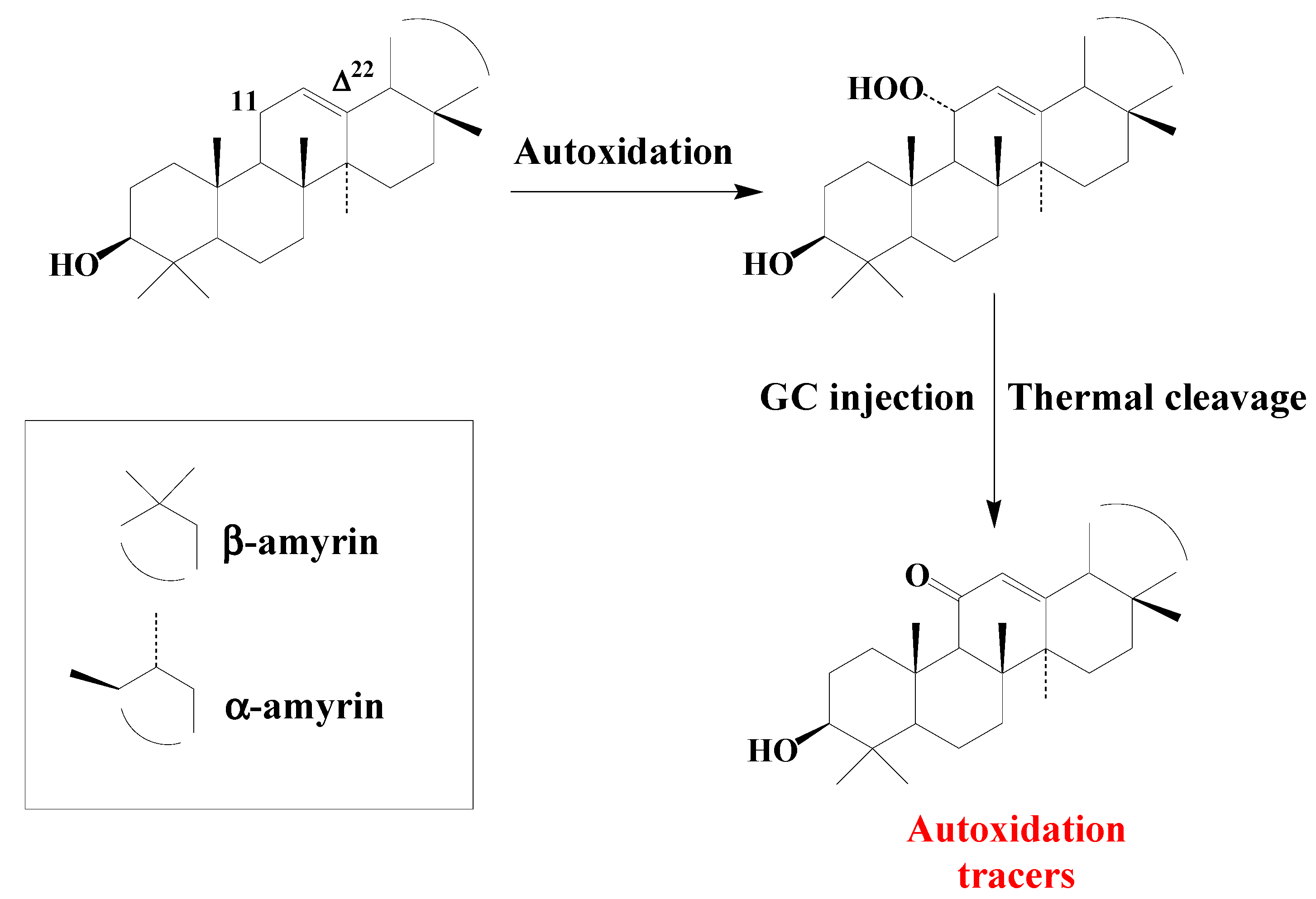 Scheme 7. Autoxidation of α- and β-amyrins.
These hydroperoxides, which appeared to be unaffected by NaBH4 reduction, are thermally cleaved to the corresponding 11-oxoamyrins during GC or GC-MS analyses using hot injectors (Scheme 7). 11-Oxoamyrins are sufficiently stable and specific to serve as tracers of amyrin autoxidation in senescent angiosperms or environmental samples.
Specific fragment ions at m/z 512.4063 [M]+•, 383.3308, 273.2213 and 232.1822 appeared to be useful for GC-QTOF monitoring of TMS derivatives of 11-oxo-amyrins in environmental samples (see example given in Figure 6A). MRM analyses using the transitions m/z 273 → 135 and m/z 232 → 217 also appeared to be well suited to the detection of traces of these compounds (see Figure 6B). 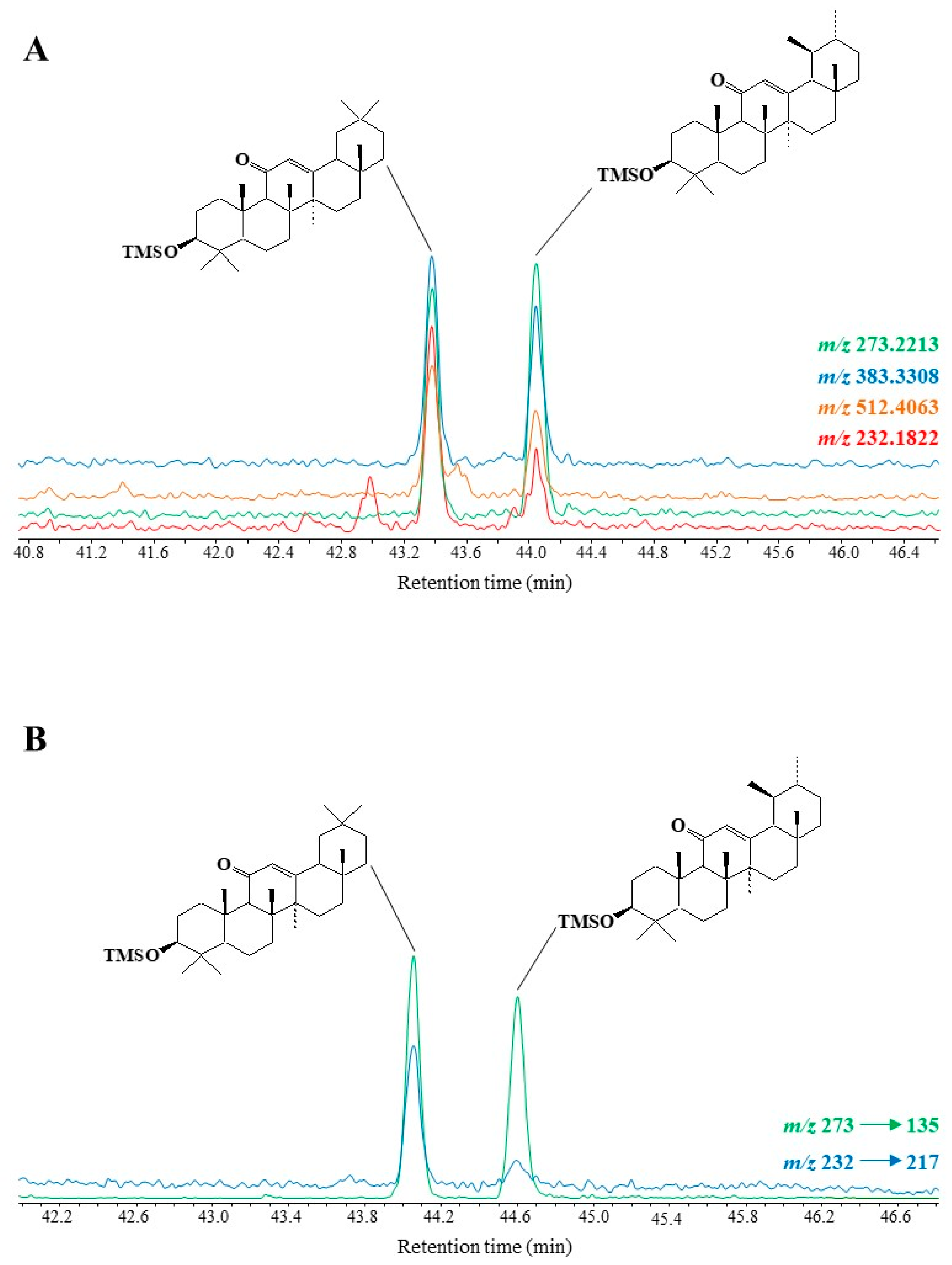 Fragment ions at m/z 191.0887, 234.1435 and 237.1638 can be used in GC-QTOF analyses to characterize TMS derivatives of the main autoxidation products of dehydroabietic acid (7α/β-hydroxydehydroabietic acids). However, MRM analyses using the highly specific transitions m/z 234 → 191 and m/z 460 → 417 [M − isopropyl group]+ emerged as better suited to detecting traces of these compounds in environmental samples (Figure 7). 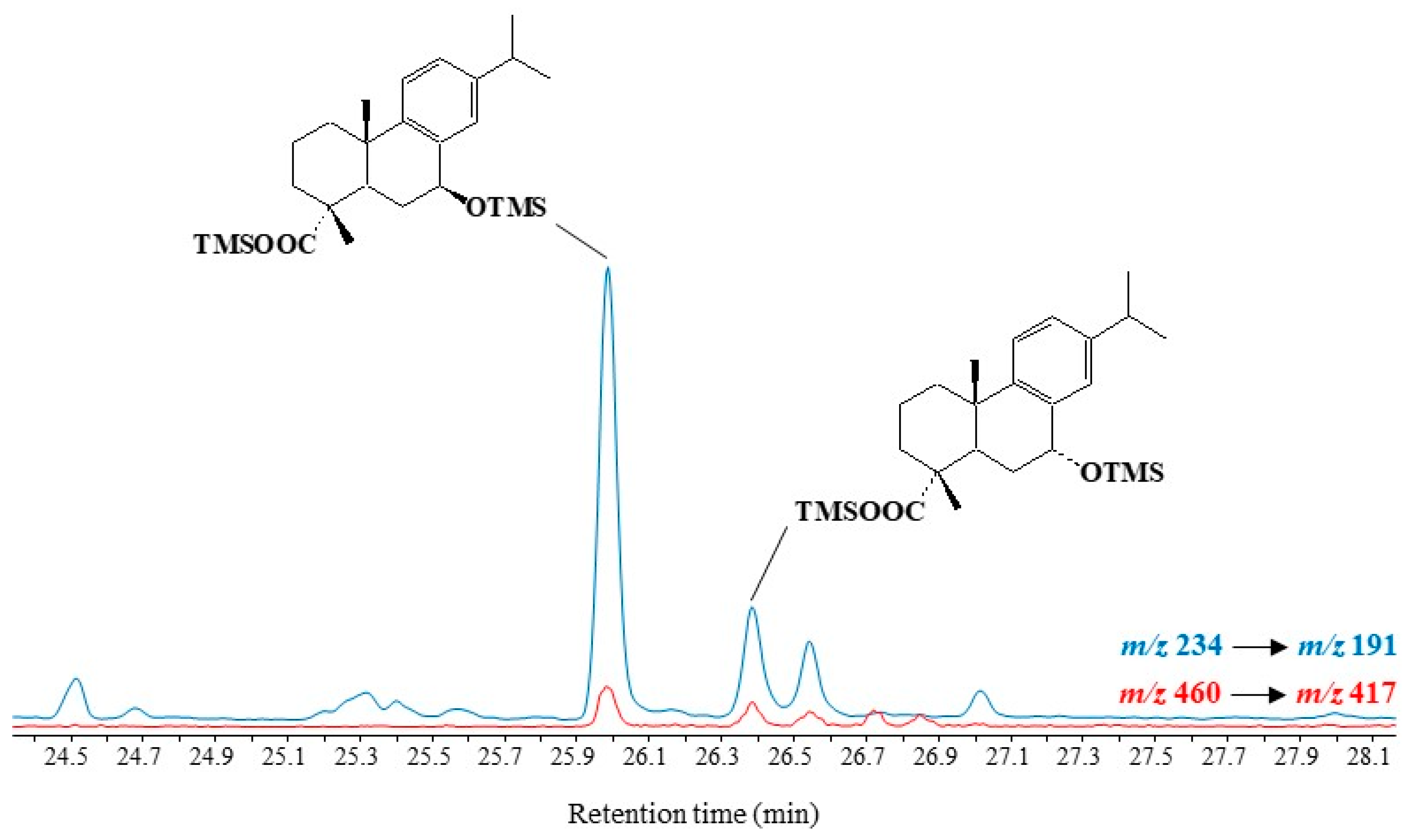 HBI alkenes (exhibiting 1–6 double bonds) are produced by some marine and freshwater diatoms belonging to the Berkeleya, Haslea, Navicula, Pleurosigma, Pseudosolenia and Rhizosolenia genera [21][22]. During the senescence of these organisms, 1O2 attack is focused on the lesser sterically-hindered trisubstituted double bonds of these alkenes affording 2 or 4 allylic hydroperoxides according to the E or Z configuration of the double bond [23]. As an example, Scheme 8 shows type II photosensitized oxidation of Z and E isomers of HBI III, which are ubiquitous throughout the world’s oceans [24]. In this case, 1O2 attack acts mainly on the C9–C10 double bond and to a lesser extent to the more sterically-hindered C7–C20 double bond affording 9- and 7-hydroperoxides, respectively, as the major oxidation products. Autoxidation processes also act very quickly on HBI III, producing numerous autoxidation products, but predominantly 9-hydroperoxides resulting from hydrogen atom abstraction at the allylic carbon 11 (Scheme 8) [25]. Indeed, the major oxidation pathway of this compound involves hydrogen abstraction at the bis-allylic C8 position to afford conjugated dienes, which are particularly prone to peroxyl radical additions and readily undergo copolymerization with oxygen (Scheme 8). Consequently, the 7-alcohol resulting from NaBH4-reduction of the corresponding hydroperoxide could be used as specific tracer of type II photosensitized oxidation of HBI III (Scheme 8). However, the reduction products of 9-hydroperoxides will only be indicative of oxidation of this specific HBI alkene. Unfortunately, in the case of HBI alkenes (such as HBI III) possessing several trisubstituted double bonds, photooxidation and autoxidation products are unable to accumulate due to the involvement of fast secondary oxidation reactions [25]. All these tracers can thus only serve to give qualitative indications. 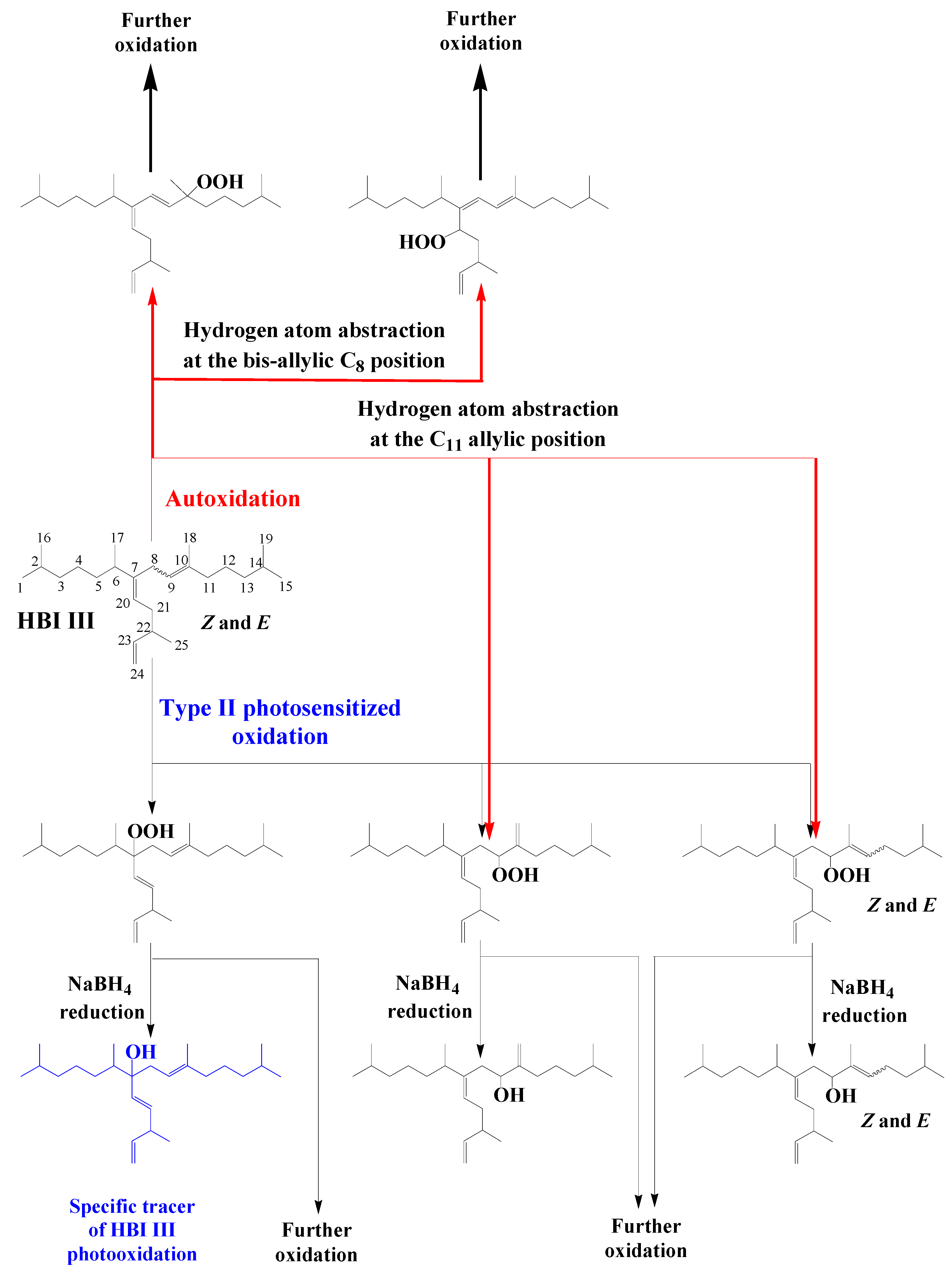 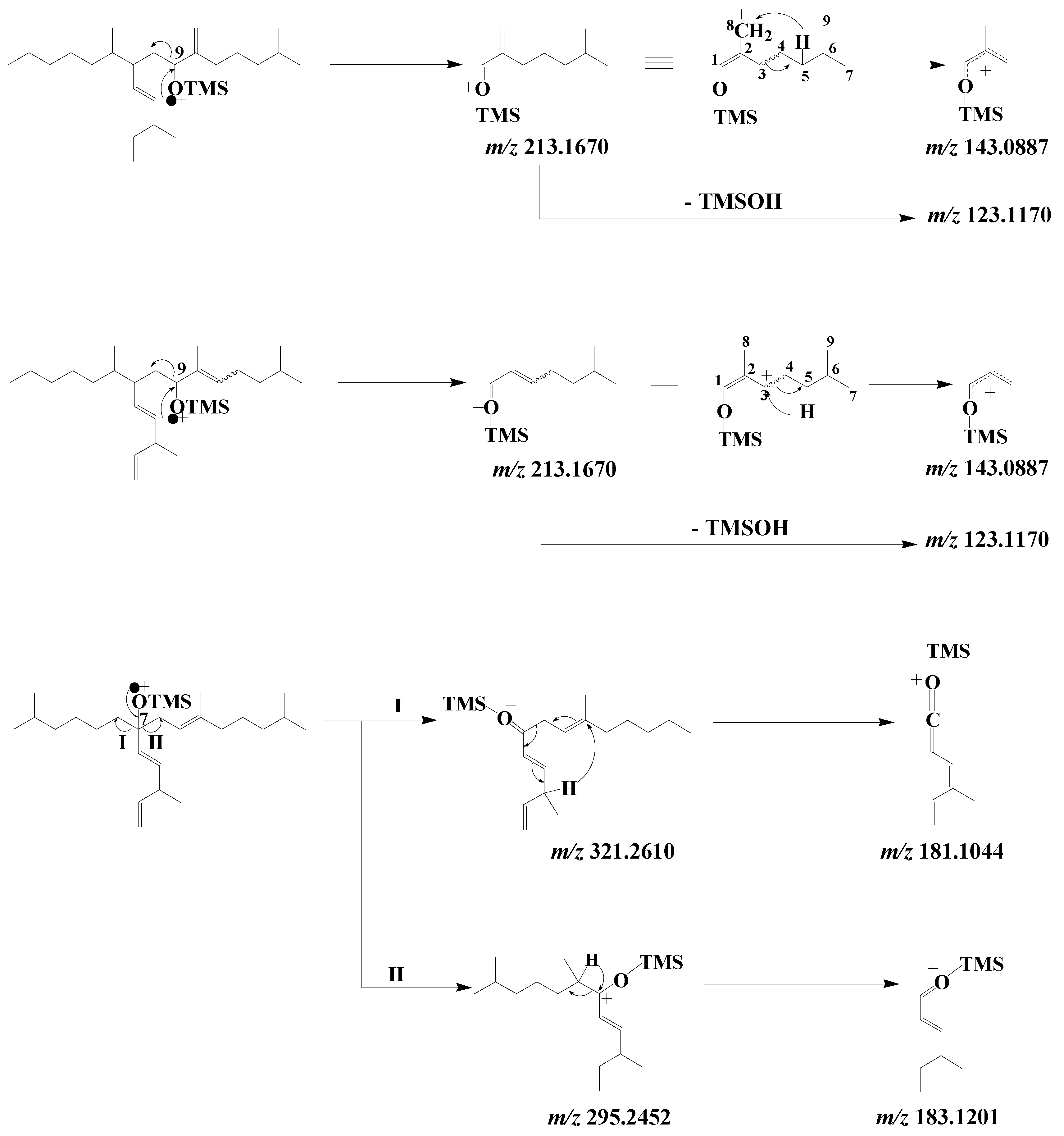 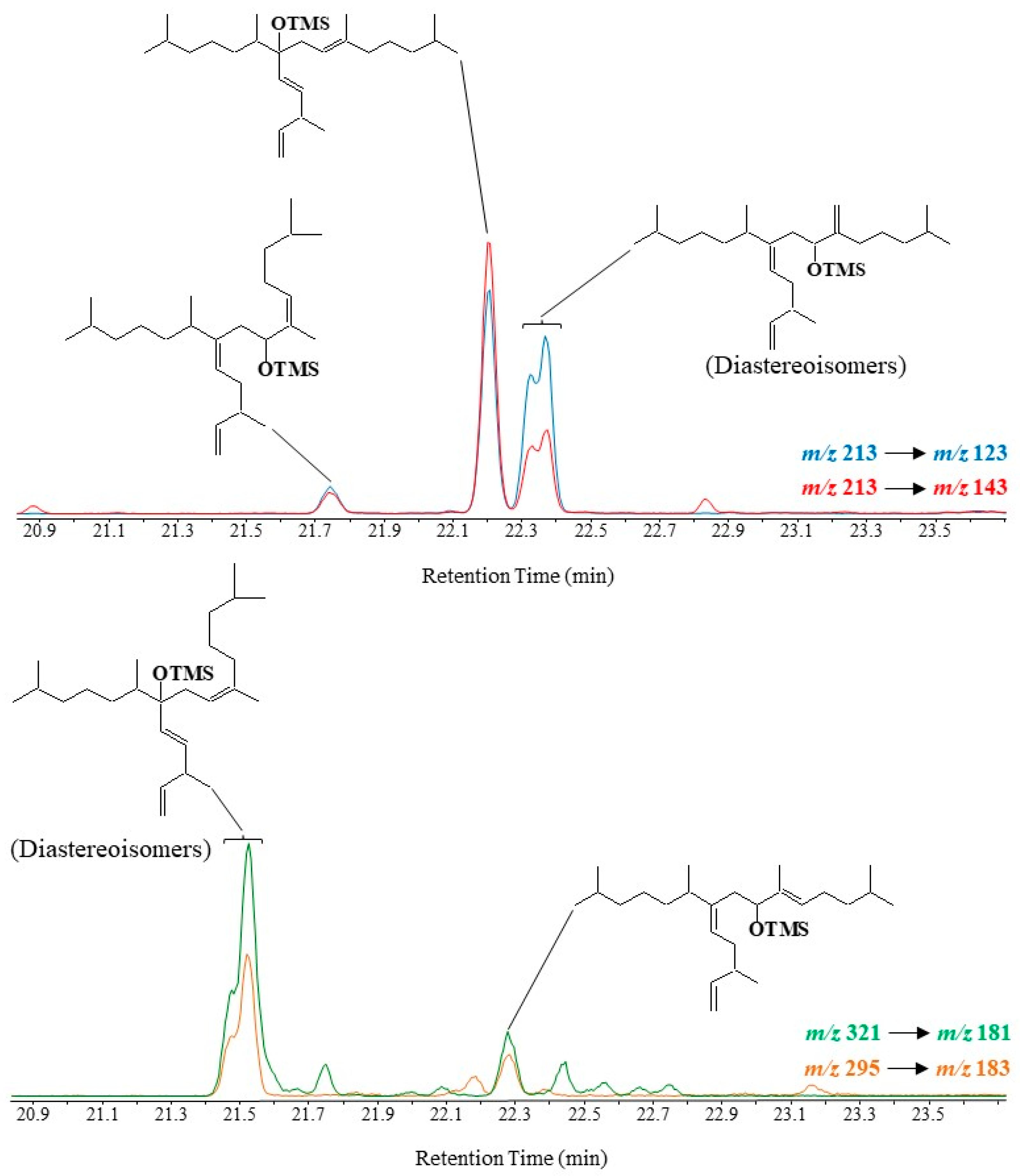 Alkenones are a class of mono-, di-, tri-, tetra- and penta-unsaturated C35–C40 methyl and ethyl ketones, which are produced by certain haptophytes [28][29][30][31][32]. The unsaturation ratio of C37 alkenones, which is defined by the equation: UK′37 = [C37:2]/([C37:2] + [C37:3]) (where [C37:2] and [C37:3] are the concentrations of di- and tri-unsaturated C37 methyl alkenones, respectively) varies positively with the growth temperature of the alga [33][34] and is thus now routinely used for paleotemperature reconstructions (e.g., [35][36]). Due to the trans- geometry of the alkenone double bonds [37], which is poorly reactive with 1O2 [38]), alkenones are not affected by type II photosensitized oxidation processes [39][40]. However, they are highly reactive to autoxidation processes [41]. Autoxidation of alkenone double bonds (separated by five or three methylene groups) affords six hydroperoxides as in the case of MUFAs . Isomeric alkenediols resulting from NaBH4 reduction of these oxidation products could make very useful indicators of autoxidative alterations of the unsaturation ratio UK′37, but unfortunately they fail to accumulate due to the subsequent oxidation of the other double bonds [42]. Note that TMS derivatives of alkene-triols, tetraols or pentaols obtained after NaBH4 reduction and derivatization of secondary oxidation products of di-, tri- or tetraunsaturated alkenones are too heavy and labile to be analyzed by GC-MS. The characterization of alkenone autoxidation products in sediments or phytodetritus with more adapted analytical techniques constitutes a very important challenge.

Carotenoids, which are important antioxidant constituents of thylakoid membranes, play special roles in the protection of tissues against damage caused by light and oxygen [43]. These compounds can very efficiently quench 1O2 by energy transfer (quenching), but also by chemical reaction (scavenging) [44]. They are also good scavengers of ROS [45]. The attack of β-carotene by 1O2 affords β-carotene-5,8-endoperoxide (Scheme 10) [46]. If this compound is generally considered a useful early signal of 1O2 production in plant leaves [47], it may be also formed during autoxidation of β-carotene [44] and is clearly not stable enough to serve as a viable environmental tracer. Unfortunately, the reaction of 1O2 and ROS with carotenoids produces oxidation products that are not sufficiently stable and specific (production of similar compounds by enzymatic processes) [44] to be used as unequivocal indicators of type-II photosensitized oxidation or autoxidation of carotenoids in senescent phototrophic organisms and environmental samples. 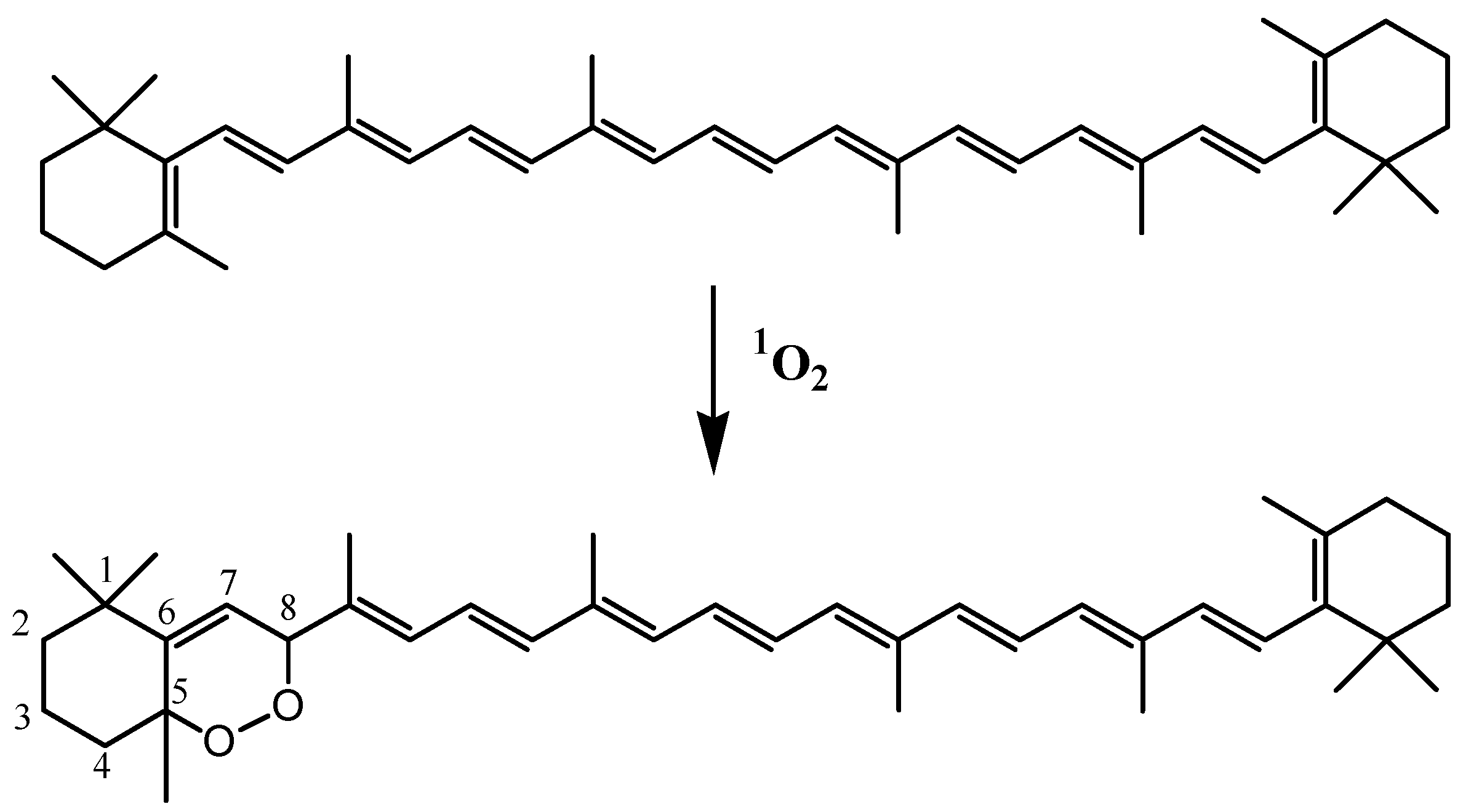 Scheme 10. Reaction of 1O2 with β-carotene.
© Text is available under the terms and conditions of the Creative Commons Attribution (CC BY) license; additional terms may apply. By using this site, you agree to the Terms and Conditions and Privacy Policy.
Upload a video for this entry
Information
Subjects: Geochemistry & Geophysics
Contributor MDPI registered users' name will be linked to their SciProfiles pages. To register with us, please refer to https://encyclopedia.pub/register :
Rontani Jean-François
View Times: 160
Revisions: 3 times (View History)
Update Date: 21 Apr 2022
Table of Contents
1000/1000
Hot Most Recent