+1 point
Thank you for your contribution! You can also upload a video entry related to this topic through the link below: https://encyclopedia.pub/user/video_add?id=21521
Check Note
2000/2000
Bio-Electrochemical Systems in Dark Fermentative Hydrogen Effluents Treatment

Bio-electrochemical systems have the potential to improve the quality of anaerobic effluents. As for dark fermentation, microbial fuel cells, as a class of bio-electrochemical systems, could provide a sufficient platform to valorize the organic matter found in the H2 production effluent. Such valorization may be implemented either by microbial fuel cells to produce electricity, or by microbial electrolysis cells to produce additional hydrogen gas.

Dark fermentation has been at the forefront of renewable energy research due to its capacity to convert organics into a gas mixture with significant H2 content. However, the fermentation effluents contain compounds such as volatile fatty acids (VFAs) and hence need proper treatment. The fact that hydrogen fermentation effluents are rich in such substances makes them suitable feedstocks for microbial electrochemical technologies driven by the underlying electro-active bacteria or their consortia. Actually, bio-electrochemical systems, such as microbial fuel cells and microbial electrolysis cells, have been widely used to generate either electricity or hydrogen gas as products from particular hydrogen fermentation effluents [1][2][3].

The treatment and potential re-use of anaerobic effluents became a bottleneck in the rapidly growing biogas and bio-hydrogen industry.

The conversion efficiency of various biological systems can be enhanced if assisted by integrated bio-electrochemical systems. This effect is due to:

Both microbial fuel cells (MFC) and microbial electrolysis cells (MEC) break down organic compounds by removing hydrogen from molecules. The exo-electrogenic microorganisms transfer the removed electrons to a positively charged anode, while the corresponding protons are ejected to the medium. These protons migrate to the cathode through a cation exchange membrane, while the electrons do the same through an external circuit. The difference is that, in an MFC, the protons and electrons recombine with oxygen, where the redox reaction supplies the necessary energy. Meanwhile, in the MEC, they recombine with each other, the necessary energy being supplied by external electric power. The two systems are compared in Figure 1 and Figure 2. 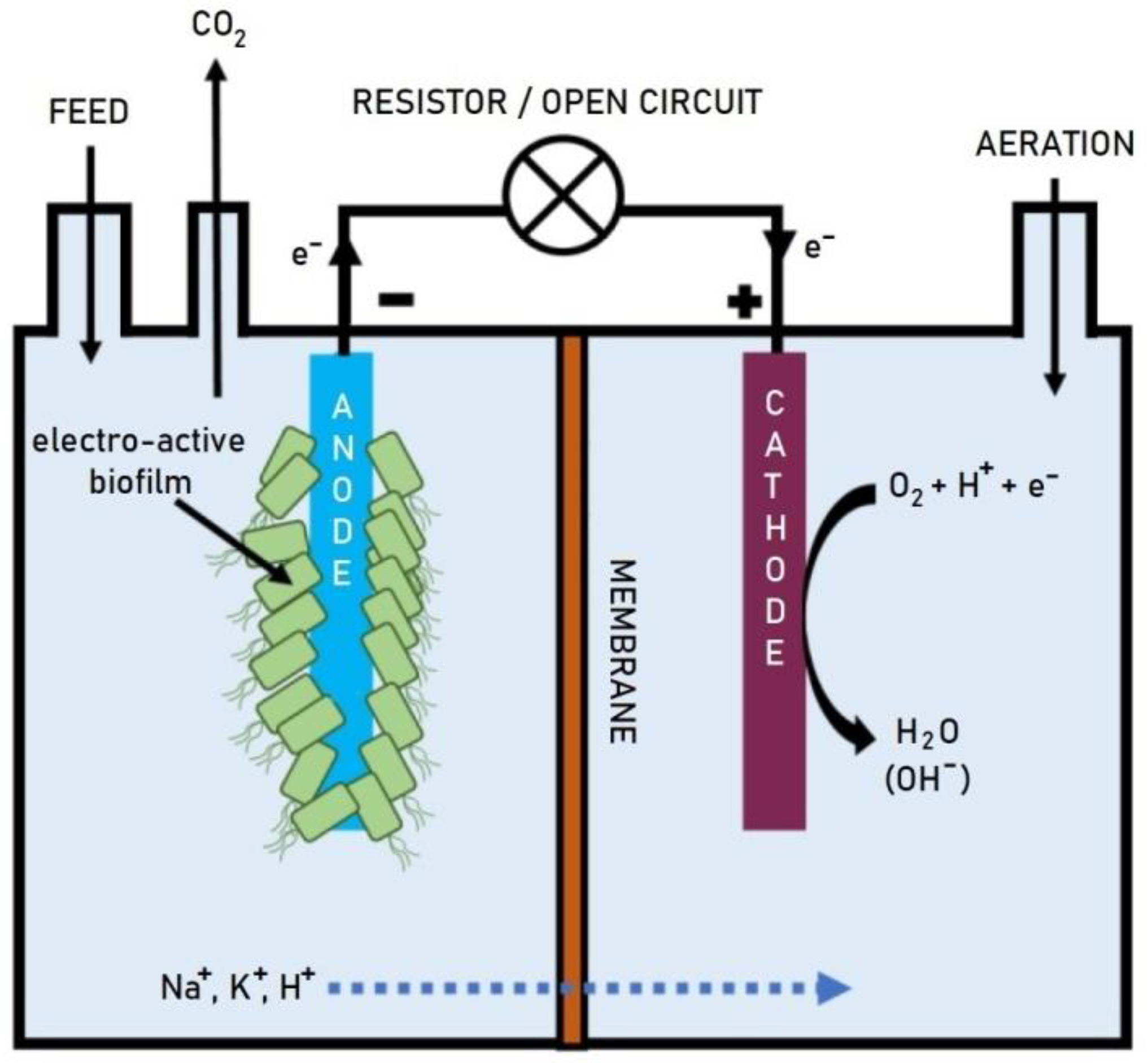 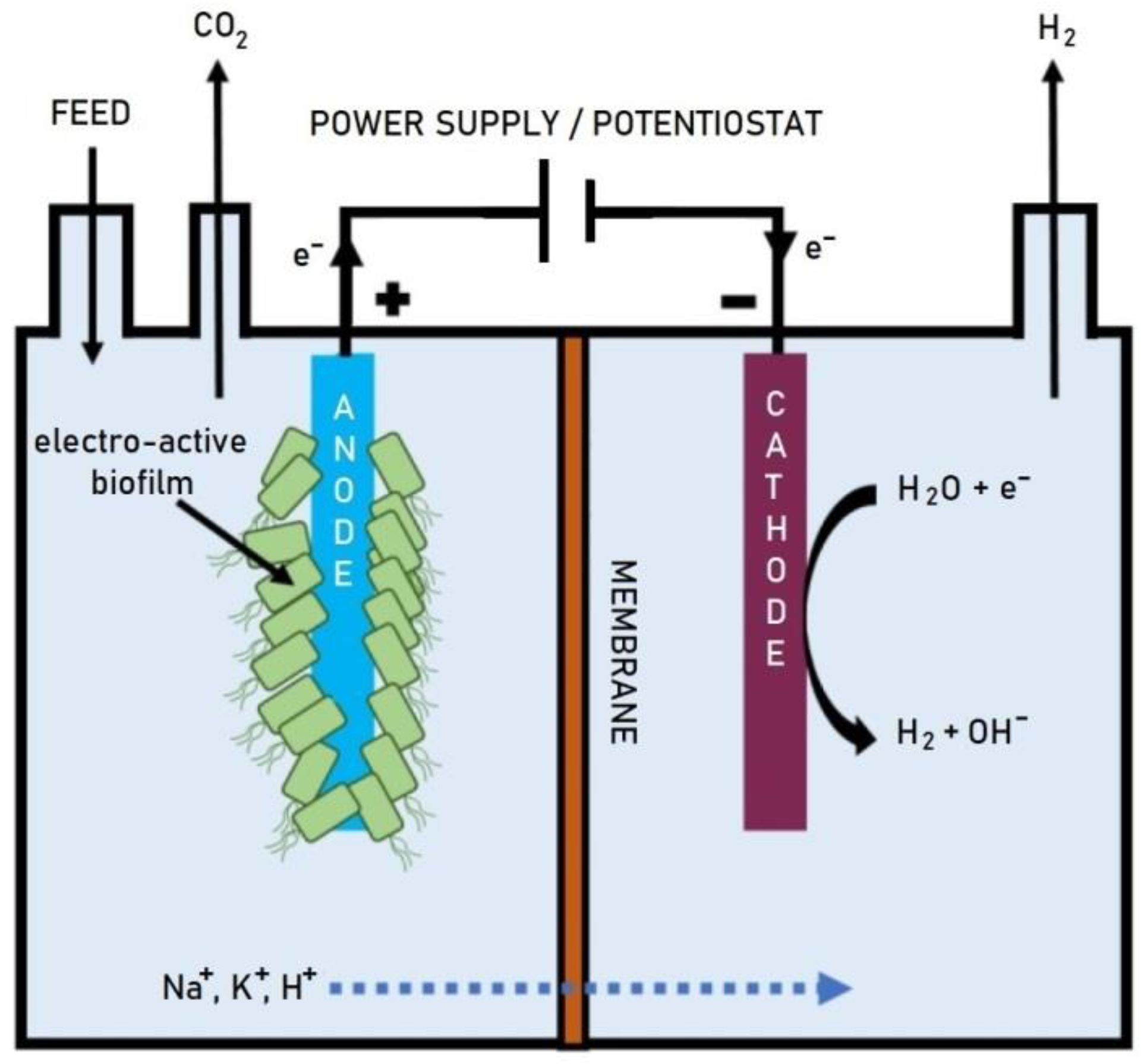 Figure 2. MEC.
The composition of the dark fermentation effluent (the concentration and relative ratio of VFAs) can vary depending on the actual hydrogen fermentation conditions [4] and, thus, it can take an effect on the achievable electron recovery efficiency and electrochemical performance of microbial fuel cells [5]. Apart from the VFAs (acetic acid, propionic acid, and butyric acid), the hydrogen fermentation effluent may contain lactate, valeric acid, capronic acid, ethanol, etc. [6]. Although VFAs are generally favored substances for electro-active strains, the type of VFA (e.g., acetic acid vs. butyric acid) can notably determine the microbial fuel cell performance [7].
From a taxonomic viewpoint, to increase MFC performance, species belonging to the genus Geobacter should be promoted in the anodic biofilm keeping in mind that the corresponding species may reflect distinct metabolic versatilities and hence affect system behavior [8]. In this aspect, when the feed of MFCs contains complex organic matter that electro-active microorganisms might be insufficient to deal with directly, rate limitations may arise from the preliminary hydrolysis/conversion steps [9]. For cases when MFCs meet complex feedstocks, mixed-source inocula could be viable to select and adapt the required (synergistic) microbes; defined co-cultures accommodating task-specific bacteria seem to be applicable as well. As for co-culture deployment in MFCs, Ren et al. [10] provided evidence for the feasibility of electricity generation in line with cellulose degradation using Clostridium cellulolyticum and Geobacter sulfurreducens. In another work [11], the constructed co-culture of Shewanella oneidensis and Klebsiella pneumonae was applied with success to convert glycerol into electricity in MFCs.

In addition to the engineering and design of effective exo-electrogenic communities in MFCs, pre-treatments can be considered for enhancing the degradation of complex materials. A pre-treatment may include fermentation or digestion, as shown, for instance, in the research of Chookaew et al. [12] and Kannaiah Goud and Venkata Mohan [13] on glycerol (the by-product of biodiesel production) and food waste, respectively. Chandrasekhar and Ahn [14] also proposed the pre-fermentation of piggery wastewater in order to increase the concentration of VFAs in the subsequent feed of MFCs. For high-organic-strength wastes, e.g., food waste, dilution with other, less-concentrated wastewaters could also be a practical approach to maintain proper MFC operation [15]. The scheme of this system can be drafted as oi Figure 3. 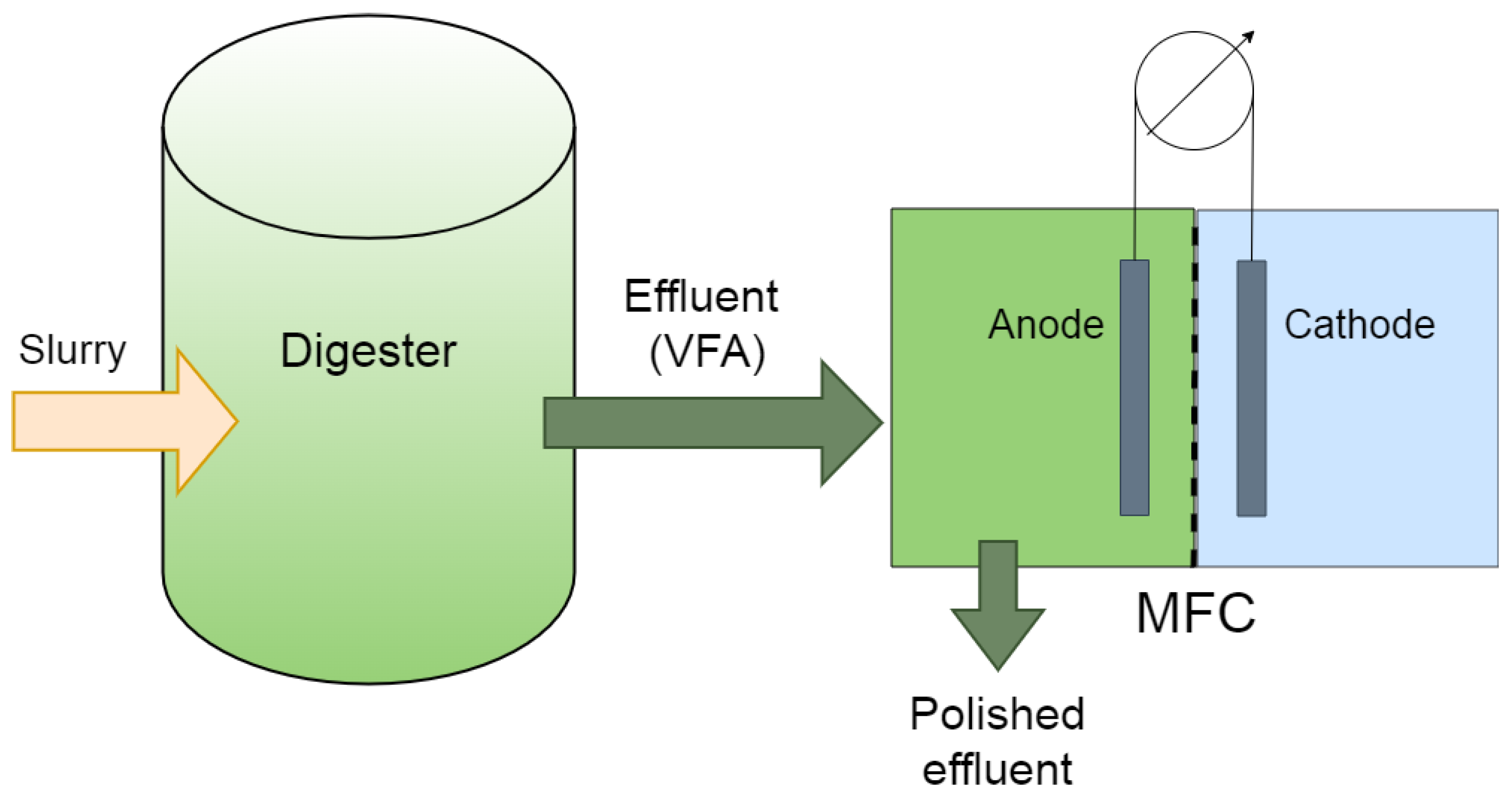 Figure 3. Pre-treatment of slurry in a biogas digester.
Though MFCs could have the potential to process wastes of the food industry e.g., cheese whey [16], treatments prior to the bio-electrochemical systems may further improve their working efficiency on such substrates [17][18]. A cornerstone of wastewater e.g., fermentation effluent management in MFCs, is the electrical conductivity of the solution, which is often low and may reduce the power density. To resolve this issue, salts might be added; however, some constraints can be faced by up-scaling the process and the tolerance of electro-active species to higher ion concentrations is a factor to be taken into account as well [19]. It is important to mention that MFCs, as pollutant treatment units of anaerobic effluents, can find a niche not only for organic matter degradation, but also for ammonia removal [20].
The performance of a wide range of bioprocesses can be largely improved if hybridized with bio-electrochemical systems [21], as seen in Figure 4. 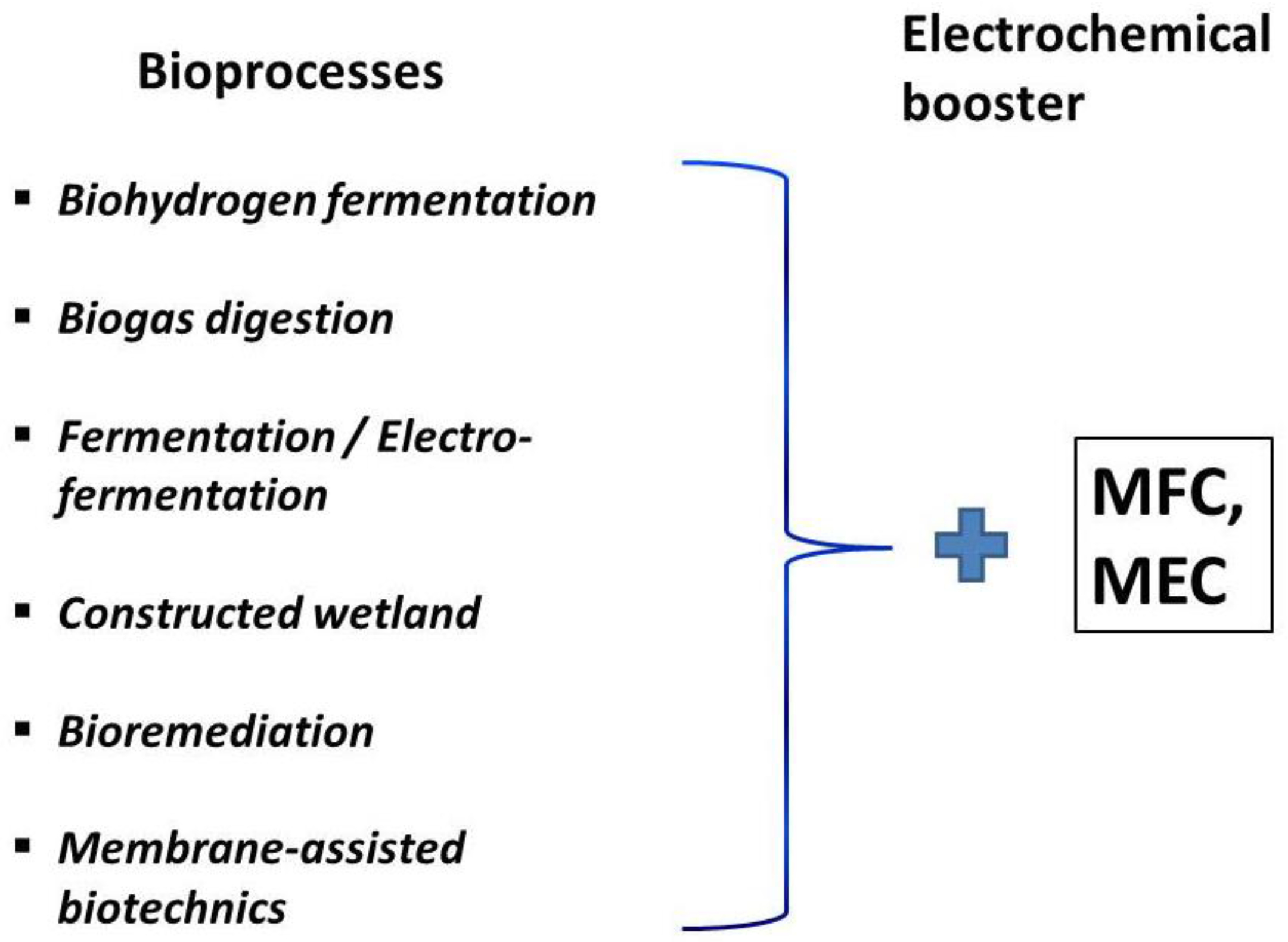 Figure 4. Potential bio-electrochemically boosted processes.
As MFCs have been proven suitable for coupling with other physical, chemical, and biological systems [21], their direct integration with dark fermentative H2 fermenters can be possible [22].
Several biological conversion steps may also be linked to a cascade where each step is fed with the effluent of the previous one to decompose residual organic matter while producing a different energy carrier. For instance, Rózsenberszki et al. produced biohydrogen from municipal solid waste press liquor in the first step, and then the effluent passed through a biogas digester. [1] The remaining effluent was finally introduced to a microbial fuel cell to produce electricity while breaking down residual organic matter. While the bulk of the conversion took place in the biogas digester, both the previous and the subsequent step contributed to the overall conversion, as presented in Figure 5. 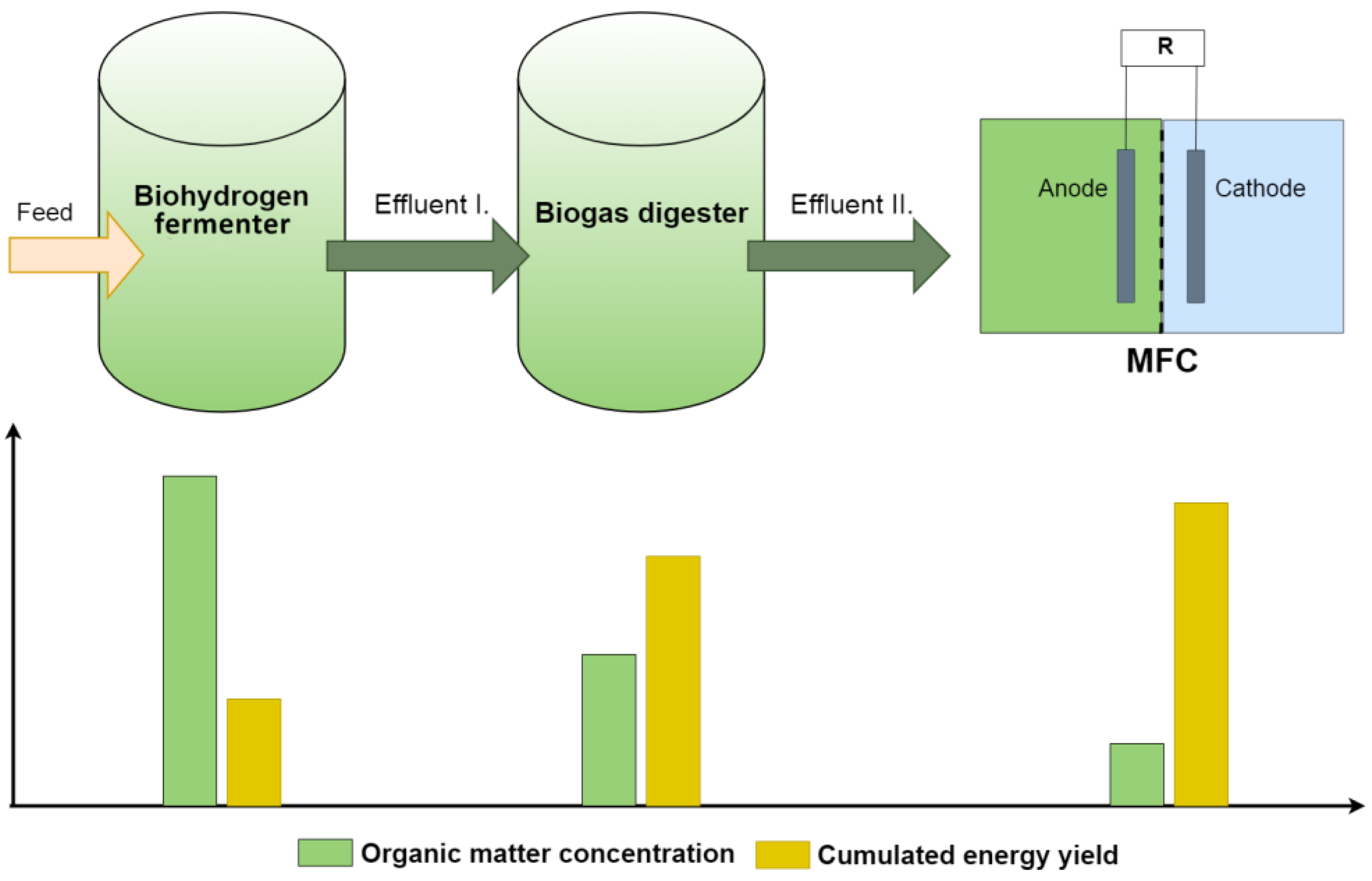 Figure 5. Conversion scheme of cascade biosystems.
By connecting more MFCs together, the global power production of the stacked (and scaled-up) configuration operated in the continuous mode could be improved [23]; however, efforts will be needed to eliminate limitations originating from the voltage reversal phenomenon [24].

More
© Text is available under the terms and conditions of the Creative Commons Attribution (CC BY) license; additional terms may apply. By using this site, you agree to the Terms and Conditions and Privacy Policy.
Upload a video for this entry
Information
Subjects: Environmental Sciences
Contributors MDPI registered users' name will be linked to their SciProfiles pages. To register with us, please refer to https://encyclopedia.pub/register :
Gabor Zoltan Szelenyi
,
Robert Kurdi
,
Nandor Nemestothy
,
Katalin Belafi-Bako
,
Péter Bakonyi
View Times: 190
Revisions: 2 times (View History)
Update Date: 11 Apr 2022
Table of Contents
1000/1000
Hot Most Recent