Submitted Successfully!
Thank you for your contribution! You can also upload a video entry related to this topic through the link below:
https://encyclopedia.pub/user/video_add?id=1833
Check Note
2000/2000
Sphingomonas Turrisvirgatae Bacteriophage vB_StuS_MMDA13
Edit
Upload a video
This entry is adapted from 10.3390/v12080894

Sphingomonas turrisvirgatae is a recently described species within the Sphingomonas genus. This species is endowed of agarolytic activity, a feature never reported before among sphingomonads. The capability of Sphingomonas sp. MCT13 to degrade agar, suggests that this strain could be potentially interesting for industrial applications in the field of complex carbohydrates degradation.

Sphingomonas is a very large and heterogeneous genus, and its huge biodiversity is responsible for the challenges of obtaining a reliable identification at the species level through conventional biochemical analyses. Indeed, bacteriophages specific for S. turrisvirgatae have been looked for, both as a rapid tool to identify and collect more isolates of this species, and for obtaining hints of its ecology.

vB_StuS_MMDA13 was isolated from a surface freshwater sample, obtained from a pond near Viterbo (Italy), by using the Sphingomonas turrisvirgatae MCT13T strain as host. The phage is lytic, belongs to the Siphoviridae family, and, as such, represents the first characterized lytic siphovirus able to infect a Sphingomonas species. vB_StuS_MMDA13 has a genome of ≈ 64 kb which encodes 89 potential proteins. A module for the biosynthesis of 7-deazaguanine derivatives, with a unique organization, is also present. The lysis module, which includes the endolysin, a holin/antiholin system and a Rz/Rz1 system, does not share significant similarities with other viral proteins in the databases. At the genome level vB_StuS_MMDA13 is loosely related to the Pseudomonas aeruginosa-infecting Nipunaviruses; however, both the 7-deazaguanine derivatives biosynthetic- and the lysis-modules are very different from these and other related bacteriophages. According to these features, we feel that vB_StuS_MMDA13 should be regarded as the type strain of a newly discovered genus within the Siphoviridae family, which we propose to name Ememdadecimater-like virus, after the short name of the first characterized phage of the genus.

Electron microscopy revealed that vB_StuS_MMDA13 shows the morphological features of the B2 morphotype of the Siphoviridae family members [2], with an icosahedral elongated head (≈70x55 nm) and a long, flexible, helical, non-contractile and striated tail of about 140 nm ending with an apparent baseplate connected to short terminal fibers (Figure 1). 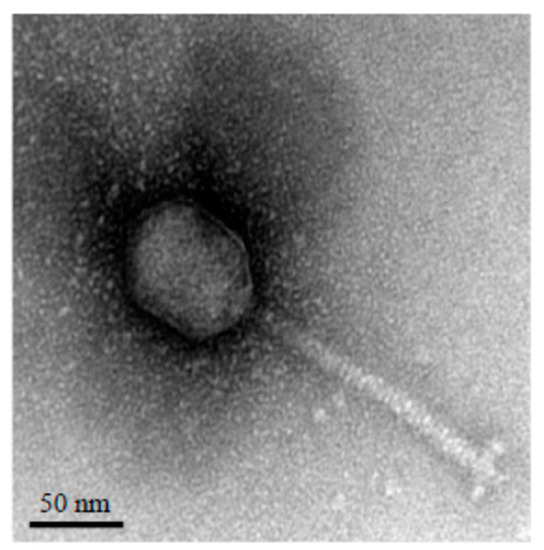 Phage particles are highly stable to both pH (range 3.0-11.0) and temperature variations (range 25-60 °C); the one-step growth curve showed long latency and rise periods, a feature observed also for other Siphoviridae infecting Alphaproteobacteria [3][4][5] which is mostly related to the slow growth of the host bacteria in liquid media. The computed average burst size was about 30 PFU per infected cell. Lisogeny was excluded both with mitomycin C treatment of three phage-insensitive colonies of S. turrisvirgatae MCT13T, obtained two days after a heavy infection, that revealed no production of phage particles, and by a PCR screening, using two different primers pairs targeting vB_StuS_MMDA13 specific genes, performed on the same phage-insensitive derivatives.

The vB_StuS_MMDA13 genome is made up of a 63,743 bp long dsDNA encoding 89 predicted proteins and having a GC content of 59.3%, by far lower than that of S. turrisvirgatae MCT13T (65.3%). The nucleotide sequence of vB_StuS_MMDA13 has been deposited in the GenBank database under the accession number MN820898.

No tRNAs were found in the phage genome, suggesting that vB_StuS_MMDA13 cannot take over the host transcription/translation system, but relies on host tRNAs for the synthesis of phage proteins. This hypothesis is corroborated by the finding that for 16/18 (88.9%) aminoacids encoded by different triplets the same most abundant codon is shared between vB_StuS_MMDA13 and its host. As expected, no lysogeny associated elements were found.

The taxonomic position of vB_StuS_MMDA13 has been tentatively evaluated by analyzing its terminase large subunit and major capsid protein (MCP) sequences. In both cases the obtained phylogenetic trees gave results highly consistent with the current ICTV taxonomy, but suggested also that vB_StuS_MMDA13 could not be assigned to any of known genera. vB_StuS_MMDA13 enters indeed in the same clade with Nipunavirus [6] but forms distinct nodes.

Similar results were obtained also by analyzing the full genome with both the Victor web-service, the OAT software (Figure 2) and the ViPTree web-service. According to the OAT analysis, vB_StuS_MMDA13 displayed a nucleotide identity ranging from 67% to 68% with the Nipunavirus classified by ICTV and with the unclassified phages JG012, JG054 and Quinobequin_P09 [7]. Interestingly, this analysis gave identical values when some members of different genera have been compared, e. g. Cajan and SE1, HdSG1 or JenK1. 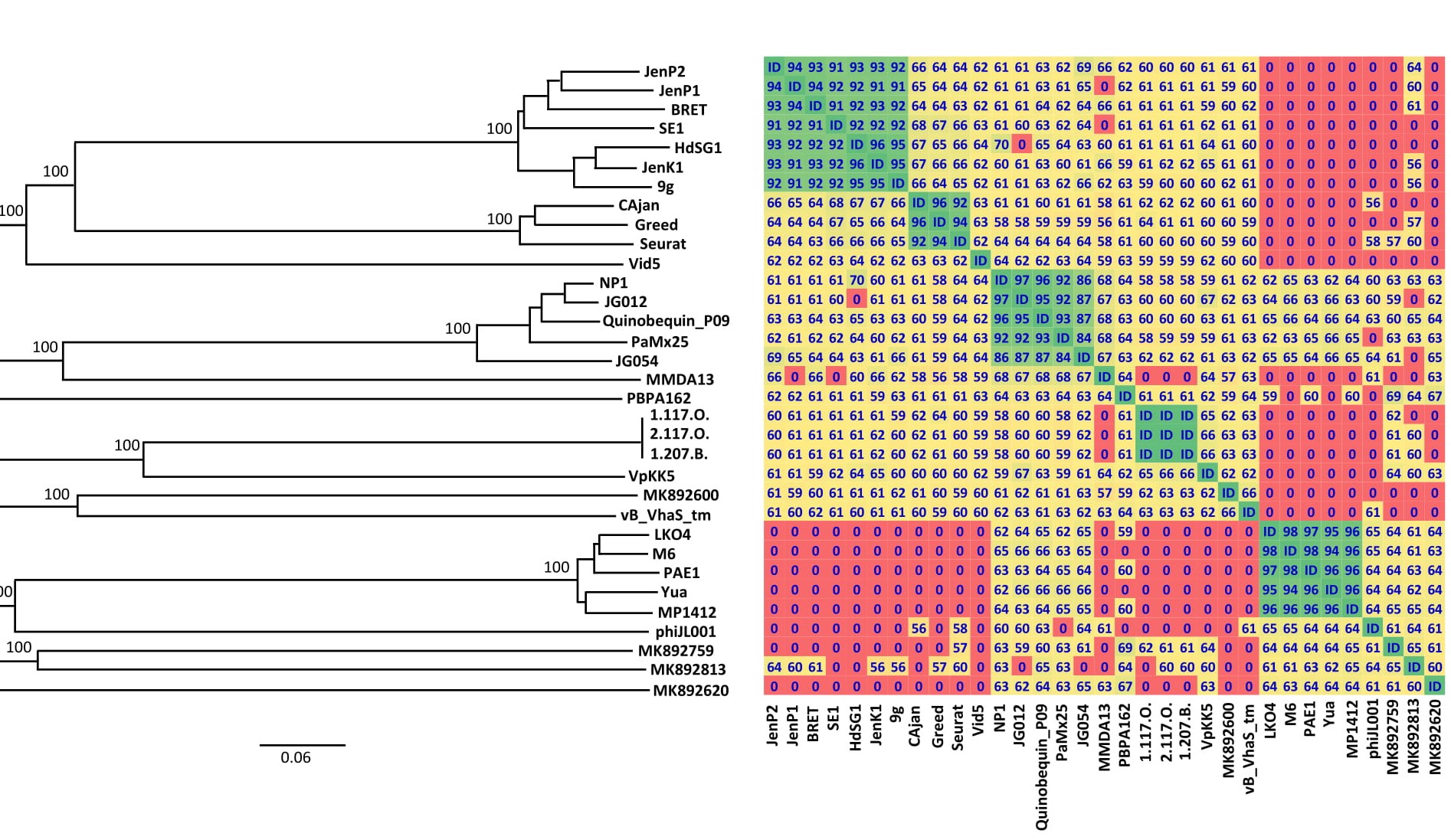 A CoreGenes analysis was performed to compare vB_StuS_MMDA13 with the type phages of the genera Nipuna-, Nonag-, Seurat- and Vidquinta-virus [6][7][8][9] and with all the unclassified bacteriophages selected according to the MCP similarities. The results showed that the highest percentage of shared ORFs (42.7 to 43.8%) was observed with the Nipunavirus/Quinobequin-P09 group.

As commonly observed for most bacteriophages, the vB_StuS_MMDA13 genome is organized in modules, with genes related to different functions grouped in clusters. The transcription directions, on the genome, diverge from a 1,186 non-coding region interposed between gp53 and gp54 (Figure 3).

A peculiar feature of vB_StuS_MMDA13 is the presence, within the DNA replication/nucleotide metabolism module, of a putative biosynthetic gene cluster for the synthesis of modified nucleotides. This cluster is made up of six ORFs, encoding the homologues of queuosine tRNA-ribosyltransferase (DpdA [10]), GTP cyclohydrolase, (FolE), 6-carboxy-5,6,7,8-tetrahydropterin synthase (QueD), 7-cyano-7-deazaguanine reductase (QueF-like), 7-cyano-7-deazaguanine synthase (QueC) and the organic radical activating enzyme, (QueE).

The organization of this cluster is unique due to the contemporary lack of a glutamine amidotransferase (GAT) domain within the QueC encoding ORF, and the presence of the QueF-like archaeosine synthase (Gp33), which provides a separate amidotransferase function. These data suggest that vB_StuS_MMDA13 belongs to the first group proposed by Hutinet et al. [7], and that it is likely able to modify its own DNA with archaeosine.

In Figure 4, the vB_StuS_MMDA13 nucleotide modification gene cluster is depicted and compared with those of type phages of related viral genera 9g, Vid5, Seurat, NP1 and Quinobequin-P09 [6][7][8][9]. 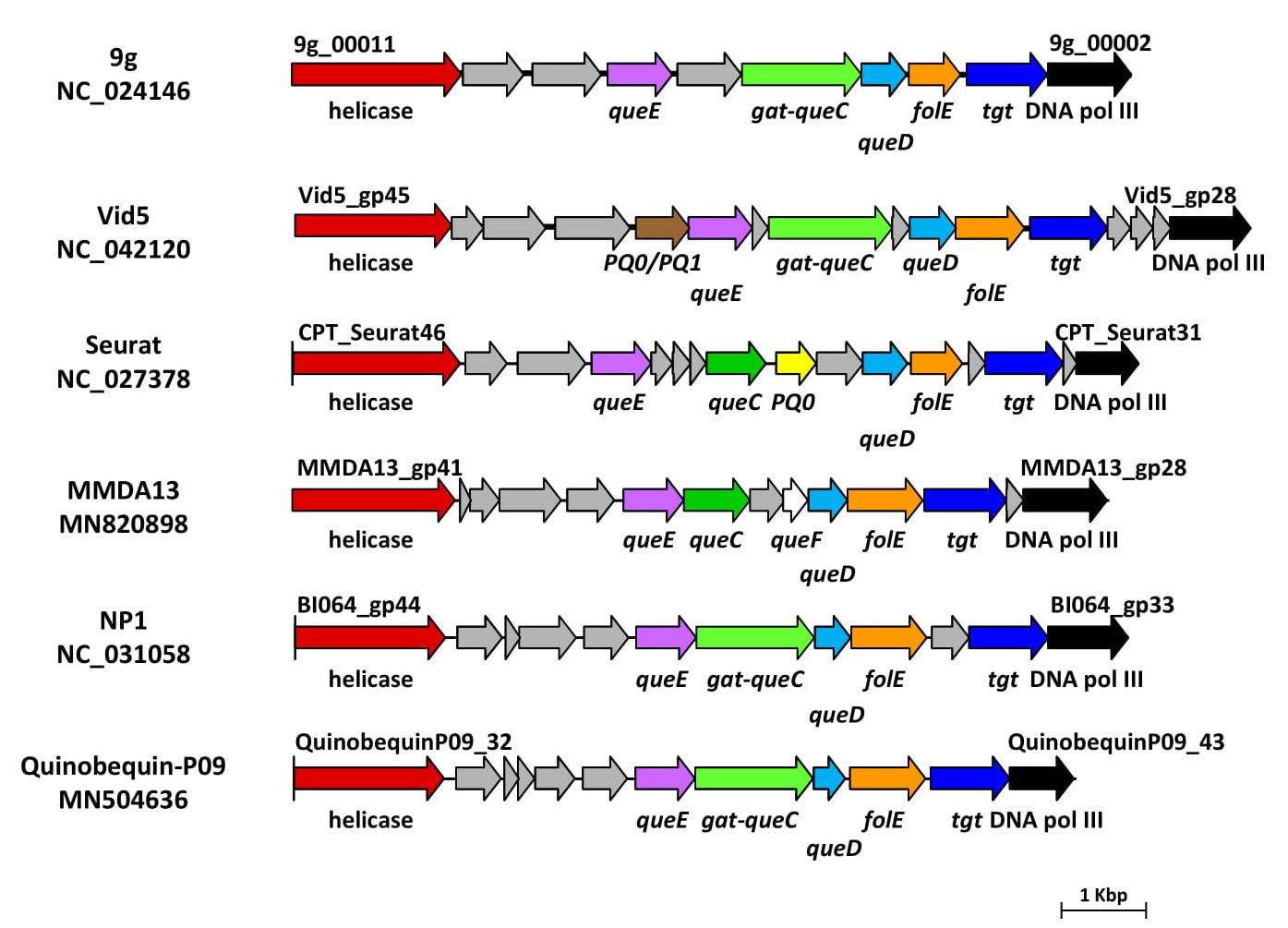 Another peculiar feature of vB_StuS_MMDA13 is the host lysis module, formed by five ORFs (gp85-gp89): (i) the endolysin encoding one (gp85); (ii) a holin/antiholin encoding system (gp86) characterized by features typical of a class II holins [11]; (iii) a Rz-like gene (gp87) and (iv) a Rz1-like gene (gp88) which overlaps Rz. The Rz/Rz1 system of vB_StuS_MMDA13, therefore, is of the “overlapped” type [12], and does not share significant similarities with other viral proteins in the databases. The lysis cassette ends with gp89 whose protein product is recognized by HHpred as a peptidoglycan endopeptidase of the RipA, whose members are known to synergistically interact with Rpf(s) in the degradation of peptidoglycan [13].

To the best of our knowledge, vB_StuS_MMDA13 is the first characterized lytic phage belonging to Siphoviridae family known to infect members of the Sphingomonas genus.

Indeed, despite the description of several bacteriophages able to lyse members of the Sphingomonadaceae family [14][15][16], very few provide an in depth characterization [3][4][17]. Our results suggest that vB_StuS_MMDA13 doesn't belong to any known bacteriophage genus. In fact, according to Adriaenssens and colleagues [18], a cutoff equal to 40% of shared proteins is the breakpoint to group two Siphoviridae in the same genus, provided the consistence of other features such as genome size and organization, morphology, packaging and replication mechanism. In the case of vB_StuS_MMDA13, the inclusion in one of the described genera should be only possible for the Nipunavirus genus. There are, however, several differences between members of the Nipunavirus and vB_StuS_MMDA13: i) the mean genome size of Nipunavirus (58.2 Kb) is ≈5.5 Kbp smaller than that of our phage (63.7 Kb), so as the ORFs number (74 vs 89) and the GC content (mean of 58.5% for Nipunavirus vs 59.3% of vB_StuS_MMDA13); ii) Nipunavirus infect Pseudomonas aeruginosa, while the host range of vB_StuS_MMDA13 seems restricted to S. turrisvirgatae; iii) the 7-deazaguanidine derivatives biosynthetic pathway is different, with vB_StuS_MMDA13 that lacks a GATase/QueC homologue, and has instead a QueC whose best BLASTP score is with a putative queuosine biosynthesis protein (AGC35898) of the Myoviridae Rhizobium phage RHEph06. The amidotransferase function should be provided by the putative QueF-L which lacks in Nipunavirus.

Moreover, the whole host-lysis module is completely different: it shares no homologies, includes five components in vB_StuS_MMDA13 and four in Nipunavirus, and the putative holins belong to different classes. Finally, some important features of Nipunavirus are not present in vB_StuS_MMDA13, e.g. thymidylate synthase, DNA topoisomerase, and the ribonucleotide reductase of class II. We believe therefore that vB_StuS_MMDA13 should not be regarded as a distant species in the Nipunavirus genus, but should rather represents the type strain of a newly discovered genus, which we propose to be named Ememdadecimater-like virus, after the short name of the first characterized phage of the genus.

More
© Text is available under the terms and conditions of the Creative Commons Attribution (CC BY) license; additional terms may apply. By using this site, you agree to the Terms and Conditions and Privacy Policy.
Upload a video for this entry
Information
Subjects: Virology
Contributors MDPI registered users' name will be linked to their SciProfiles pages. To register with us, please refer to https://encyclopedia.pub/register :
Marco Maria D'Andrea
,
PASQUALE MARMO
,
Maria Cristina Thaller
,
Luciana Migliore
View Times: 271
Revisions: 6 times (View History)
Update Time: 28 Aug 2020
Table of Contents
1000/1000
Hot Most Recent