Submitted Successfully!
Thank you for your contribution! You can also upload a video entry related to this topic through the link below:
https://encyclopedia.pub/user/video_add?id=17201
Check Note
2000/2000
Protein-Based Systems for Translational Regulation of synthetic mRNAs
Edit
Upload a video
This entry is adapted from 10.3390/life11111192

Synthetic mRNAs, which are produced by in vitro transcription, have been recently attracting attention because they can express any transgenes without the risk of insertional mutagenesis. Protein-based translational regulation systems enable the context-dependent production of therapeutic proteins and have the potential to further improve the efficacy and safety of synthetic mRNAs.

During gene expression, genes are first transcribed from DNA to messenger RNA (mRNA) and then translated from mRNA to protein. Thus, researchers can make cells express exogenous genes by transfecting either DNA or mRNA. Although DNA transfection is the standard method for transgene expression, it can cause insertional mutagenesis of endogenous genes, which is a major drawback in medical applications. In contrast, synthetic mRNAs, which are produced by in vitro transcription, can be used for transgene expression without the risk of insertional mutagenesis. Thus, synthetic mRNAs have recently been attracting attention as tools for gene therapy, cellular reprogramming, and vaccine development [1].

Nevertheless, context-dependent regulation of transgene expression is more difficult in synthetic mRNA transfection than in DNA transfection. Upon DNA transfection, transgene expression can be tuned using transcriptional regulatory sequences, such as drug-inducible or tissue-specific promoters. On the other hand, such transcriptional regulation cannot apply to synthetic mRNA transfection as they must be transcribed in vitro prior to transfection. As some therapeutic genes may cause adverse effects when they are expressed in inappropriate contexts, context-dependent transgene regulation is helpful to cope with low adverse effects and high therapeutic efficacy. For example, cell-selective expression of pro-apoptotic genes [2][3][4][5][6] may enable cancer cell elimination without damaging healthy cells. Similarly, cardiomyocyte-selective expression of proliferation-promoting genes can be helpful to cope with myocardial regeneration without elevating fibrosis and immune response [7]. Thus, the development of translational regulation systems will make synthetic mRNAs more valuable. 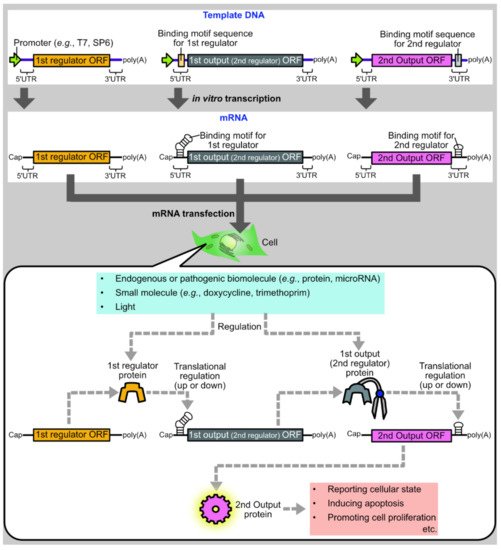 Figure 1. Schematic diagram of a protein-based translational regulation system for synthetic mRNAs. Synthetic mRNAs encoding regulator or output proteins are synthesized by in vitro transcription and transfected into cells. After transfection, a regulator protein is translated from an mRNA and regulates the translation of another mRNA encoding an output protein. Then, the output protein induces various biological phenomena such as apoptosis or cell proliferation. In multi-layered gene circuits, the 1st output protein acts as the 2nd regulator to regulate the translation of the 2nd output ORF. For cell state-responsive autonomous regulation, regulator proteins or mRNAs are designed to respond to endogenous or pathogenic biomolecules such as proteins or microRNAs. Regulator proteins can also be designed to respond to external cues such as small molecules or light for deliberate control of translation.

Motif-specific RNA binding proteins (RBPs) are mainly used for two purposes. One is to fuse RBPs with other protein modules, so that other modules can act on synthetic mRNAs. The other is to repress translation only by the binding of RBPs to the 5' untranslated regions (UTRs) of synthetic mRNAs, without being combined with other protein modules (Figure 2, the 1st row). 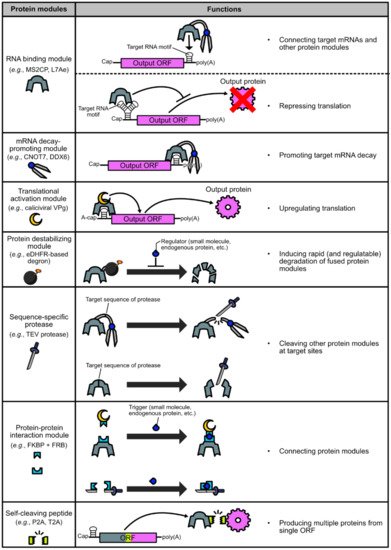 Figure 2. List of protein modules used in translational regulation of synthetic mRNAs.
In order to regulate the translation of only synthetic mRNAs while avoiding the effect on endogenous mRNAs, it is desirable to use RBPs that have high specificity for target RNA motifs, and these motifs are not present in endogenous mRNAs. Thus, microbial RBPs are primarily used in mRNA-based mammalian synthetic biology. The representative microbial RBPs used to regulate synthetic mRNAs are coat proteins derived from the bacteriophages MS2 (MS2CP) [2][3][4][5][6][10][11][12][13][14][15][16][17][18][19][20][21] and PP7 (PP7CP) [6][14][21], the archaeal ribosomal protein L7Ae [2][3][4][6][7][11][12][21][22][23][24][25], and the tetracycline-responsive repressor protein (TetR) from Escherichia coli [23][26]. Among these, TetR is unique in its ability to conditionally dissociate from the target RNA motif by doxycycline addition. In addition to these microbial proteins, mammalian RBPs can also be used, such as U1A, a spliceosomal protein [10][13][21][27], and LIN28A, a pre-microRNA binding protein [21][27] (Figure 3). However, when these mammalian proteins and their target RNA motifs are used in mammalian cells, it should be noted that they may interact with endogenous RNAs or proteins. Such interactions can induce unintended effects on both the regulation of synthetic mRNAs and endogenous pathways. 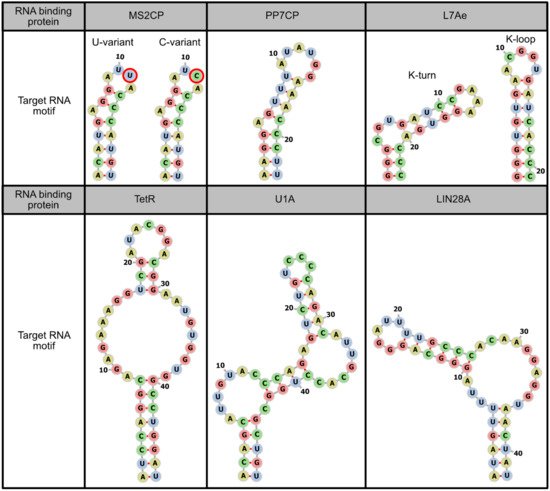 Translation of a eukaryotic mRNA is typically initiated by the binding of the eukaryotic initiation factor (eIF) 4F complex to the cap structure at the 5' end of the mRNA, which in turn recruits the 40S subunit of the ribosome via the eIF4F-eIF3-40S subunit interaction [37]. Therefore, two components are needed to achieve conditional activation of mRNA translation by protein-based systems. One is an mRNA lacking the canonical 5' cap (typically, a translationally inactive cap analog, termed "A-Cap", is used instead of the canonical cap), and the other is a translational activator protein that can directly or indirectly recruit ribosomes to mRNAs even in the absence of the canonical 5' cap.
One of the proteins that can recruit ribosomes is the viral protein genome-linked (VPg) from calicivirus. Caliciviral VPg is a relatively small (e.g., 111 amino acids in the case of feline calicivirus) protein that is fused to the 5' end of the caliciviral RNA. Since caliciviral RNAs lack the 5' cap, caliciviruses use VPg to recruit ribosomes to their RNAs via a VPg-eIF4F interaction [38][39][40]. Researchers showed that the fusion protein of MS2CP and the feline caliciviral VPg, named caliciviral VPg-based translational activator (CaVT), can activate the translation of A-capped mRNAs containing the MS2CP-target motif in their 5' UTRs [5][20] (Figure 2, the 3rd row).
Another example of a translational activator protein is a fusion protein composed of MS2CP and the C-terminal region (amino acids 623-1600) of eIF4G. eIF4G is a component of the eIF4F complex, and its C-terminal region has a role in the interaction with eIF3 and the 40S subunit of the ribosome. Paek et al. reported that connecting the C-terminal region of eIF4G to the 3’ UTRs of A-capped mRNAs can activate their translation [15]. It should be noted, however, that in the study, the MS2CP-eIF4G fusion protein was expressed not from a synthetic mRNA, but a cytomegalovirus promoter-embedded plasmid DNA (pDNA). Compared to synthetic mRNA, pDNA containing a strong promoter shows a higher maximum level of expression, although the variability in the expression level among cells is also higher [41]. Therefore, future studies are needed to determine whether synthetic mRNAs can produce an adequate amount of MS2CP-eIF4G to activate the translation of A-capped mRNAs. The translational activating function of eIF4E, another component of the eIF4F complex, was also shown in experiments using pDNA transfection [42]. 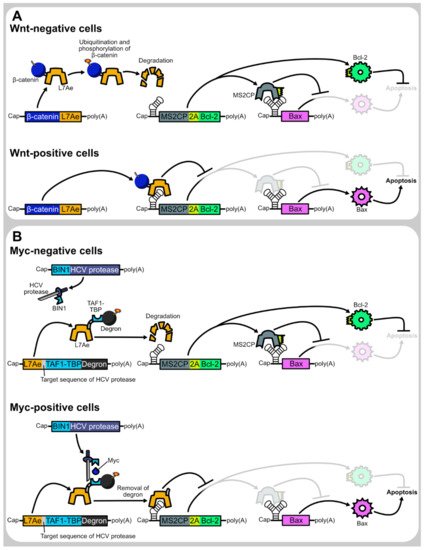 Figure 4. Representatives of endogenous protein-responsive translational regulation systems. (A) Wnt-responsive apoptosis induction system. In Wnt-negative cells, β-catenin-fused L7Ae is rapidly degraded due to ubiquitination and phosphorylation of β-catenin. Therefore, the L7Ae target motif (K-turn)-embedded mRNA encoding MS2CP and Bcl-2 is not translationally repressed. The translated MS2CP represses the translation of Bax, whereas Bcl-2 prevents apoptosis caused by leaky expression of Bax (top). In contrast, in Wnt-positive cells, β-catenin-fused L7Ae is not rapidly degraded and represses the translation of MS2CP and Bcl-2. As MS2CP translation is repressed, Bax is not translationally repressed by MS2CP and induces apoptosis (bottom). (B) Myc-responsive apoptosis induction system. In Myc-negative cells, L7Ae is rapidly degraded due to the fused degron. Similar to the case of the Wnt-responsive system shown above, the rapid degradation of L7Ae results in the prevention of apoptosis (top). In Myc-positive cells, TAF1-TBP that is fused to L7Ae attracts BIN1-fused HCV protease. Then, HCV protease cleaved its target sequence inserted between L7Ae and TAF1-TBP-degron. Due to the cleavage, the degron is removed from L7Ae, which stabilizes L7Ae. Then, stabilized L7Ae translationally represses MS2CP and Bcl-2, thereby induces Bax-mediated apoptosis (bottom).

Some viruses such as tobacco etch virus (TEV), tobacco vein mottling virus (TVMV) [47], and hepatitis C virus (HCV) [48] have sequence-specific proteases that recognize and cleave the target sequences of five to seven amino acid residues. When multiple proteins are connected by a linker containing a target sequence of such protease, the protease can separate these proteins and alter the property of the fusion construct (Figure 2, the 5th row). One example is abolishing promoted mRNA decay by separating the RNA binding module and the mRNA decay-promoting module [12][14]. A fusion protein consisting of an RBP (MS2CP or PP7CP) and CNOT7 can normally promote the decay of mRNAs that have target RNA motifs. However, if the linker connecting these two proteins contains a target sequence of protease, the corresponding protease can separate CNOT7 from the RBP, thereby abolishing CNOT7-mediated mRNA decay. Similarly, when a protease target sequence is inserted between the degron and the translational regulator protein, the corresponding protease can stabilize the translational regulator by removing the degron from it [4][6].
If a target sequence can be inserted without impairing the function of the protein, sequence-specific proteases can also be used to cleave the protein that is not constructed by fusing multiple proteins. For example, Cella et al. showed that L7Ae with a TEV protease target sequence can repress translation in the absence of TEV protease, and translational repression can be released by cleavage of L7Ae by TEV protease [12].
When multiple proteases are used simultaneously in a single system, the orthogonality of these proteases needs to be checked, as unexpected cleavage by non-corresponding proteases can cause unexpected output. For example, Cella et al. reported that the turnip mosaic virus (TUMV) protease has moderate cleavage activity against the target sequences of TEV, TVMV, and sunflower mosaic virus (SuMMV) [12].

More
© Text is available under the terms and conditions of the Creative Commons Attribution (CC BY) license; additional terms may apply. By using this site, you agree to the Terms and Conditions and Privacy Policy.
Upload a video for this entry
Information
Subjects: Biotechnology & Applied Microbiology
Contributor MDPI registered users' name will be linked to their SciProfiles pages. To register with us, please refer to https://encyclopedia.pub/register :
Hideyuki Nakanishi
View Times: 82
Entry Collection: Biopharmaceuticals Technology
Revisions: 2 times (View History)
Update Time: 17 Dec 2021
Table of Contents
1000/1000
Hot Most Recent