Submitted Successfully!
Thank you for your contribution! You can also upload a video entry related to this topic through the link below:
https://encyclopedia.pub/user/video_add?id=17082
Check Note
2000/2000
Egyptian Carob Pods (Ceratonia siliqua L.) Aqueous Extract
Edit
This entry is adapted from 10.3390/plants10122626

Ceratonia siliqua (Carob) is an evergreen Mediterranean tree, and carob pods are potentially nutritive and have medicinal value.

Plants are of great interest in drug discovery and are the main source of our modern medicine. About 25% of modern medicines are derived from a plant origin and only 5–15% of plants are being investigated for their medicinal use [1]. Today, medicinal herbs and functional foods are being widely studied resulting in lucrative therapeutic potentials [2]. Where the secondary metabolites, which possessed antioxidant properties can fight several pathological disorders such as cancer, heart disease, hypertension, dementia, and stroke [3]. However, chemotherapies have many adverse effects; several anti-diabetic drugs such as Rosiglitazone and Alogliptin can have severe complications. Therefore, scientists have tried to find naturally occurring anti-diabetic compounds as they have low toxic effects [4]. In addition, the WHO has stated that if there is no action taken to develop/find new antibiotic agents, the deaths due to infection resistance will be greater than cancer [5]. Bacteria develop resistance against antibiotics due to the presence of multi-drug resistance (MDR) pumps which are predominant in Staphylococcus aureus, Pseudomonas aeruginosa, Escherichia coli, etc. Therefore, researchers are trying to find MDR inhibitors, especially those derived from medicinal plants, due to their diversity to increase the efficacy of antibiotics [6].
Ceratonia siliqua L., Carob, is an evergreen tree that belongs to the Leguminosae family. It is widely cultivated in most Mediterranean basin countries [7]. The carob fruit (bean) is called a pod and is composed of two parts: the seeds (10%) and the pulp (90%). The pulp consists of two parts: a leathery outer layer (pericarp) and a softer inner area (mesocarp) which contain the seeds [8][9]. Carob pulp contains a wide range of biologically active compounds, including polyphenols, sugars, cyclitols, amino acids, fibers, and minerals, whereas carob seeds contain gum, polyphenols, and proteins [10]. Due to its chemical composition, carob and its ethanolic extract have a strong antioxidant activity and possess several valuable therapeutic functions, such as lipid-lowering [11], anti-proliferative, anti-cardiovascular [12], and nephroprotective properties [13]. In addition, carob has exhibited significant pharmacological activities in the digestive tract including antidiarrheal, antibacterial, anti-ulcer, and anti-inflammatory actions, and possesses a laxative effect on gastrointestinal propulsion [14].

2. The Phytochemical Ingredients of the CPAE 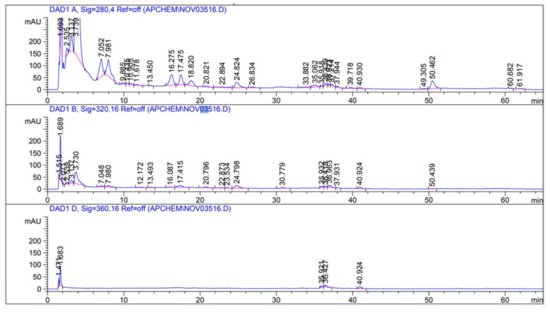 3. The Antioxidant Effect of CPAE

The results in Figure 2 revealed that Amylase, Maltase, Sucrase, and Lactase activities were strongly inhibited by CPAE in a concentration-dependent manner.

5. The Hemolytic Effect of CPAE

Hemolytic activity of CPAE was screened against normal human erythrocytes. Figure 3 showed that the hemolytic percent was increased from 0.7 to 3.2% when the concentration of CPAE increased in the range from 10 mg/mL to 100 mg/mL. The calculated hemolytic IC50 was 1562.5 mg/mL. 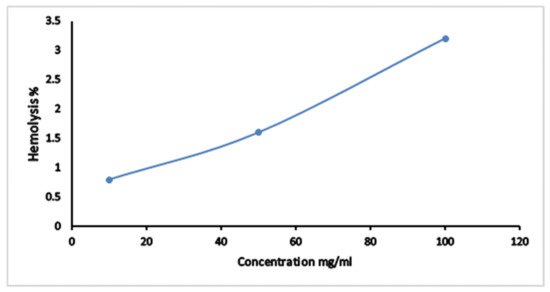 6.1. The Antibacterial Activity against Gram-Negative, Gram-Positive Bacteria and Antifungal Effect

Table 4 shows that the CPAE had a significant antibacterial property against Bacillus subtilis, Staph. aureus, and Escherichia coli. However, CPAE did not show any activity against Gram-negative bacteria Pseudomonas aeruginosa. Moreover, it exhibited a potent antibacterial effect compared to that of gentamicin (positive control antibiotic) in the case of Staphylococcus aureus and Escherichia coli with ZOI (25 and 24 mm, respectively). In addition, the extract exhibited an antifungal effect against Candida albicans, while it did not show any activity against Aspergillus falvus Table 4.
Table 4. Antimicrobial activity of carob pod aqueous extract.
In each raw, CPAE mean with * was significantly difference compared to that of gentamicin mean, at p < 0.05. N.A: No activity, positive control is gentamicin, Carob pod aqueous extract, CPAE.