Submitted Successfully!
Thank you for your contribution! You can also upload a video entry related to this topic through the link below:
https://encyclopedia.pub/user/video_add?id=17055
Check Note
2000/2000
Statins and Cancer
Edit
Upload a video
This entry is adapted from 10.3390/ph14121220

Statins are one of the key drugs used in the course of hypercholesterolemia, the first of which is lovastatin, which was introduced to the market in 1987. Nowadays, mainly simvastatin, rosuvastatin and atorvastatin are used. The oldest and best-studied of them is simvastatin, but rosuvastatin is characterized by the greatest potency in the percentage reduction in low density lipoprotein (LDL), so it should be selected as the lipid-lowering drug of first choice in patients with cardiovascular diseases.

3-Hydroxy-3-methylglutaryl coenzyme A (HMG-CoA) reductase inhibitors, known as statins, are a commonly used and well-tolerated class of drugs used in lipid disorders, especially in cases of hypercholesterolemia. Their effectiveness in preventing the development of cardiovascular diseases makes statins one of the most widely used drugs [1]. While there are clear benefits of statins in reducing mortality in high-risk patients, it is still uncertain whether statins may increase or decrease the risk of cancer [2]. The effect of long-term statin use is quite complex, as they have multiple properties that go beyond lipid lowering. There is evidence that statins exacerbate endothelial dysfunction and decrease levels of inflammatory markers [3][4]; however, it is still unclear whether they influence cancer risk. The studies conducted so far have shown, on the one hand, the carcinogenic effect of statins [5], and, on the other hand, no effect on carcinogenesis [6] or even their protective effect [7][8].

There are currently many observational studies available that aim to assess the risk of individual cancers in long-term statin users. However, only some studies have found that statin use has lasted longer than 5 years [9]. None of these findings are statistically significant, except in one study showing a reduced risk of prostate cancer in 42 statin users [10]. In addition, it has been shown that over five years of statin use in 10 common cancers, including prostate, breast, colorectal, lung, bladder, pancreatic, renal cell, melanoma, endometrial cancer and non-Hodgkin lymphoma, significantly reduced the risk of hematological cancers and increased endometrial cancer risk associated with more than 5 years of use of statins [11].

It has been shown that taking lipophilic statins such as simvastatin, atorvastatin, lovastatin, fluvastatin and pitavastatin, which can penetrate into cancer cells, is associated with a better prognosis in patients with breast cancer. On the other hand, improved survival in patients with hepatocellular carcinoma, colon cancer or prostate cancer is visible after the use of any statin [12]. The broad spectrum of the action of statins includes their effects on the proliferation, migration and survival of cancer cells by regulating the Rho factor, resistance to audiogenic seizures (Ras) and Rac-like guanosine triphosphate (GTP)-binding protein 1 (Rac) proteins, but also by inhibiting cancer cell growth modulated by specific pathways [13]. Co-administration of fluvastatin and vorinostat successfully induced apoptosis and reduced renal cancer growth in vitro and in vivo through the activation of 5’ adenosine monophosphate-activated protein kinase (AMPK), histone acetylation and cell stress induction [14]. Another study proved that simvastatin deregulated mutant p53 protein, activating the caspase-dependent apoptotic pathway and thus reducing the mobility of p53-mutated lung cancer cells [15]. In addition to their angiostatic effect, statins inhibit the synthesis of cytokines, including interleukin (IL-) IL-1β, IL-6, IL-8 and tumor necrosis factor alpha (TNF-α). The set of cytokines in the cluster of cancer cells stimulates them to proliferate and reorganize the spatial network of blood vessels, which promotes metastasis [16][17]. In studies conducted in mice transplanted with human breast cancer cells (MDA-MB-237), administration of cerivastatin to the tumor tissue significantly reduced the cross-linking of blood vessels of pathological tissue [18].

The integrity and permeability of blood vessels play an important role in metastasis. Statins have been shown to induce the expression of endothelial cadherins (including VE-cadherin), which are responsible for tight intercellular junctions. Increasing the number of cadherins is associated with strengthening vessels tightness, which limits the expansion of cancer cells in the body [19][20]. Moreover, statins inhibit the reprogramming of cancer cells into cancer stem cells responsible for metastasis and tumor immunity by reducing the transcriptional activity of the Yes1-associated transcriptional regulator (YAP1) and fafazzi (TAZ) and inhibiting geranylgeranyl pyrophosphate (GGPP) production [8].

Statins also regulate autophagy, which is triggered as a cellular defense mechanism when the elimination of toxic stress-inducing components or elements can ensure cell survival. It has been shown that autophagy can participate in both tumor suppression and its progression. On the one hand, it reduces the viability of cancer cells, is extremely important in the early stages of cancer promotion and represents a critical mechanism, and on the other hand, it stimulates aging processes caused by oncogenes. The tumor promoting effect of autophagy is mainly exerted in the later stages of cancer development. The dynamic proliferation of cancer cells requires large energy resources, which autophagy provides by recycling cell substrates [21]. Moreover, it promotes the survival of cancer cells under stressful conditions, such as tumor hypoxia and nutrient deficiency [22]. Simvastatin-induced autophagy has been reported in rhabdomyosarcoma cells [23]. It should be emphasized that autophagy also plays an important role in inducing resistance to chemotherapy [24].

An interesting phenomenon is that statins can also induce ferroptosis, which is another type of programmed cell death. This process is triggered by metabolic changes, and it is characterized by iron overload, accumulation of reactive oxygen species and lipid peroxidation, which can be used in statin therapy of cancer cells resistant to chemotherapy [24]. Another process induced by statins is pyroptosis, accompanied by cell swelling, rupture, lysis and, as a result, the release of pro-inflammatory cytokines. Studies have shown that pyroptosis is closely related to the development of various diseases, including cancer. Pyroptosis-inducing molecule gasdermin D (GSDMD) may be a promoter of gastric cancer cell proliferation, which has been proven both in in vitro and in vivo studies [25]. The potential use of statin-induced pyroptosis and its importance in the anticancer aspect requires further research and explanation. The potential mechanisms of the action of statins are shown in Figure 1 . 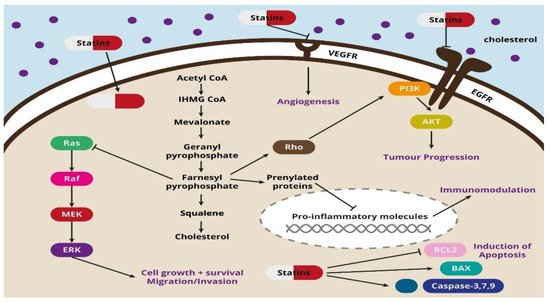 3. Cancer In Vitro Data and Statins

The Increased proliferation of cancer cells is caused by elevated cholesterol levels in these cells [26]. In vitro studies on medulloblastoma lines showed that simvastatin inhibits HMC-CoA reductase, thereby affecting the inhibition of metalloproteinase secretion via GGPP [8][27]. It is worth adding that HMG-CoA reductase is extremely important in maintaining cell viability, and its inhibition induces apoptosis and negatively affects cell proliferation. GGPP can serve as a substrate for protein prenylation or as a precursor for the synthesis of other metabolites, such as coenzyme Q or dolichols. In recent years, it has become clear that different types of cancer cells are dependent on GGPP synthesis [28]. Significant changes in the MMP-9 levels were observed in in vitro cultured human breast cancer cells [12]. Fluvastatin and simvastatin also reduced the release of MMP-9 in human and murine macrophages [29][30]. In turn, in studies of human microvascular endothelial cells (HMEC-1), cerivastatin dose-dependently reduced or completely blocked the expression or synthesis of MMP-2 [31].

In vitro pro-apoptotic activity has been documented in studies on cancer cell lines, including cancer of the cervix, pancreas, thyroid gland, prostate, colon, breast and larynx, as well as multiple myeloma or leukemia [20][21][22][23][24][25][32][33][34]. Importantly, statins activated various molecular events that promote apoptosis, depending on the type of cancer cell. Statins also affects the expression and activity of cyclins and cyclin-dependent kinases (CDKs) and their inhibitors. This leads to a blockage of the cell cycle at two of its critical points: G1/S and G2/M, thus inhibiting cell division. Under conditions where the statin dose is adequate and there is an imbalance between pro- and anti-apoptotic proteins, statins induce apoptosis [35][36][37][38][39][40][41][42].

One of the key mechanisms of the antitumor activity of statins is also the angiostatin effect in neoplastic lesions [43][44]. It is based on the expression modulation of anti- and pro-angiogenic factors, including VEGF, FGF and IGF-1, leading to the inhibition of angiogenesis and, as a result, reduction in metastatic capacity of cancer cells [43][45][46]. The dualistic nature of statins in terms of their role in the formation of blood vessels is observed in scientific literature, where the vast majority of studies report the anti-angiogenic effects of statins on cancer cells; however, a few demonstrate their ability to stimulate endothelial cell division and angiogenesis [19][44][47].

The clear presence of metalloproteinases in tumor masses, through the remodeling of extracellular matrix and basement membrane, has an unfavorable prognosis [48]. Organizational changes in the cell cytoskeleton, destabilization of actin filaments or changes in morphology favoring apoptosis are also a consequence of statins’ influence on cancer cells. The great potential of statins in terms of their use as drugs delaying progression and expansion of cancer has been proven in the course of experimental work [12][27][49].

Studies have shown that statins, in this case simvastatin, induce the phosphorylation of endothelial nitric oxide synthase, inhibiting apoptosis and promoting Akt-dependent angiogenesis in the ischemic limbs of normocholesterolemic rabbits [50]. Lipophilic statins have higher cytotoxic potential and are more pro-apoptotic than hydrophilic statins, and therefore may be more beneficial in cancer treatment [46].

In in vivo studies in mice, pitavastatin was injected intraperitoneally, which inhibited the growth of subcutaneous glioma cells [51]. Simvastatin tested in a mouse model in which a human lung cancer xenograft was introduced inhibited tumor growth and bone metastasis, which occurred with a simultaneous reduction in MAPK/ERK activity [36]. The inhibition and delay of tumor growth was also observed in a pancreatic cancer xenograft in mice treated with a combination of gemcitabine and fluvastatin [52]. Advanced clinical trials are ongoing, with a large amount of promising in vitro and in vivo data on the efficacy of statin therapy in several different cancer models [8][53].

More
© Text is available under the terms and conditions of the Creative Commons Attribution (CC BY) license (http://creativecommons.org/licenses/by/4.0/)
Upload a video for this entry
Information
Subjects: Oncology
Contributor MDPI registered users' name will be linked to their SciProfiles pages. To register with us, please refer to https://encyclopedia.pub/register :
BENIAMIN Oskar GRABAREK
View Times: 33
Revisions: 2 times (View History)
Update Time: 29 Mar 2022
Table of Contents
1000/1000
Hot Most Recent