Submitted Successfully!
Thank you for your contribution! You can also upload a video entry related to this topic through the link below:
https://encyclopedia.pub/user/video_add?id=17031
Check Note
2000/2000
Prevalence/Predisposing Factors for Recurrence after Hallux Valgus Surgery
Edit
Upload a video
This entry is adapted from 10.3390/jcm10245753

Recurrence is a frequent and undesirable outcome after hallux valgus (HV) surgery. It has a multifactorial etiology with a combination of factors including the anatomical predisposition of the patient, surgical factors, medical comorbidities and compliance with postsurgical instructions following surgery.

Hallux valgus (HV) is a common foot deformity, which affects nearly 23% of adults aged 18–65 years, and is more common in women and with increasing age [1]. Mild cases are generally treated with conservative methods, but patients with severe and painful deformity are usually referred for surgical correction. However, the optimum procedure to correct HV remains to be defined, and more than 130 different surgical techniques are described in the literature [2]. Unfortunately, when HV treatment is inadequately prescribed or executed, it frequently results in low levels of patient satisfaction, raising issues of quality of life and functionality outcomes, especially after HV surgery [3][4].
Recurrent HV is a frequent postoperative complication, with rates as high as 73% [5], although the mechanisms that underpin recurrence after HV surgical correction are not fully understood. In the literature, recurrence rates vary significantly across studies, most likely due to different definitions of recurrence, and also due to the postoperative time frame reported for a recurrence [6][7][8]. Furthermore, causal factors leading to recurrent HV remain speculative, and no rigorous meta-analysis of studies quantifying recurrence rates following HV surgery and predisposing risk factors has been published.
Within this context, it is incumbent on foot and ankle specialists to identify potential risk factors for HV recurrence not only to prevent a considerable proportion of recurrent HV, but also to improve treatment outcomes. 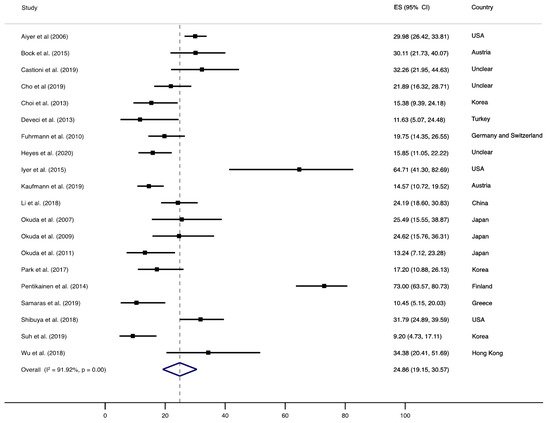 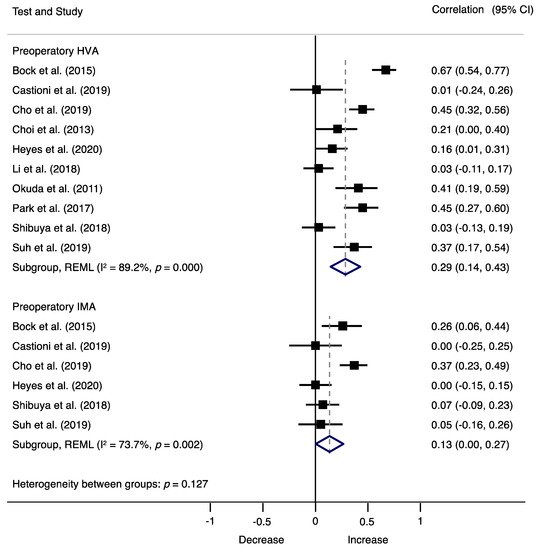 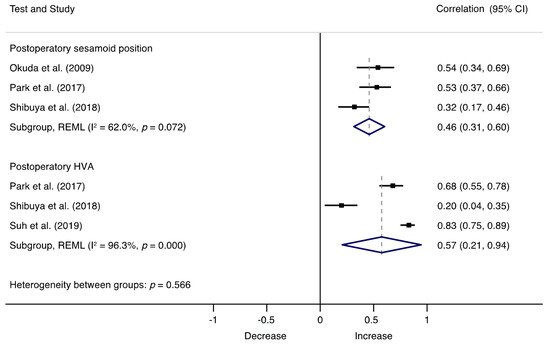 Findings suggest that HV recurrence occurs in approximately one-quarter of patients undergoing corrective surgery (24.86%), and it is associated with many potential factors, including preoperative HVA and IMA, and postoperative HVA and sesamoid position. These findings highlight the need to identify adequate strategies aimed to reduce or prevent recurrence following HV surgery.
Increased preoperative HVA and IMA were found to be significant risk factors for HV recurrence, regardless of the surgical technique used, ruling out a potential relationship between a specific surgical technique and recurrence. For this reason, a possible explanation for these associations may be related to the selection of the surgical procedure. Surgery success relies, at least partly, on the ability of the operator to recognize the underlying causes of HV in each patient, and this decision partially depends on the level of deformity and extent of correction required. In this context, the IMA has been traditionally considered to guide treatment, and different approaches have been indicated according to this angle: distal osteotomies for mild to moderate HV deformities, and when more correction is needed, more proximal first metatarsal osteotomies or first tarsometatarsal fusions are recommended [9]. However, the existing body of research on HV currently considers its multiplanar structure and the rotational deformity of the first ray [10][11][12], and it has been suggested that the ability to attain a satisfactory correction may be influenced by ‘derotating’ the first metatarsal bone [11]. Because surgical options are generally aimed to treat the metatarsus varus deviation, but not any rotation [13], it could be argued that the undercorrection of a pronated metatarsal may account, at least partly, for some cases of recurrence in patients with increased HVA or IMA.
Furthermore, the possible interference of other factors related to surgery, such as the execution of the procedure, which depends largely on the surgical expertise of the operator, cannot be ruled out. For instance, some metatarsal osteotomies are more technically demanding than others, have a steeper learning curve, and need special attention to the 3D changes when performing it [14].
Regarding postoperative factors, the immediate postoperative HVA was strongly associated with recurrence. The immediate postoperative HVA reflects the correction achieved immediately after the surgery; an increased HVA may reflect an undercorrection of the surgery, and therefore, a recurrence of the deformity according to the definition of recurrence used in most studies (that is, a HVA higher than 15° or 20°, depending on the study). Likewise, a tibial sesamoid position greater than 4 was strongly correlated with recurrence. This position represents the location of the internal sesamoid relative to the middle line of the metatarsophalangeal joint, where 1 is considered a normal position and 7 denotes complete luxation [15]. This malposition of the internal sesamoid might be the result of the HV rotational forces that push the sesamoid complex after the metatarsal through several ligamentous connections between the first metatarsal bone, the hallux, and the sesamoids [13]. Because a complete correction of HV entails the correction of the rotation component of the deformity, it could be assumed that a tibial sesamoid position greater than 4 after surgery may imply that total correction of the deformity was not achieved, this being a possible explanation for its relationship with recurrence. It has been suggested that the use of computerized axial tomography imaging in evaluations of HV may be useful for surgeons when they make operative choices to treat this condition, considering that up to 87% of patients with HV deformities have a pronated first metatarsal, with or without sesamoid subluxation [16].
Very little was found on whether joint congruence is associated with recurrence because not enough information was provided to assess this association. However, previous reports have shown significant associations between first metatarsophalangeal joint incongruity on preoperative radiographs and recurrent HV following a scarf osteotomy [8][17]. Although further research is needed to confirm this association, the presence of incongruence in the first metatarsophalangeal joint should be carefully considered when planning surgery for HV, as it could potentially increase the risk of recurrence. Moreover, available data on compliance with postoperative care instructions were scarce, so it was not possible to quantify its association with recurrence. This factor was only measured in the study of Castioni et al., who reported that patients with poor compliance to postoperative care instructions had higher risk of developing a larger postoperative HVA and, therefore, HV recurrence [17]. Additionally, meta-regression analyses indicated that the duration of follow-up did not moderate the recurrence correlation coefficients. However, age significantly increased these associations, being a potential factor to consider when planning a surgical intervention.

More
© Text is available under the terms and conditions of the Creative Commons Attribution (CC BY) license (http://creativecommons.org/licenses/by/4.0/)
Upload a video for this entry
Information
Subjects: Orthopedics
Contributor MDPI registered users' name will be linked to their SciProfiles pages. To register with us, please refer to https://encyclopedia.pub/register :
Yasmín Ezzatvar
View Times: 54
Revisions: 2 times (View History)
Update Time: 14 Dec 2021
Table of Contents
1000/1000
Hot Most Recent