Submitted Successfully!
Thank you for your contribution! You can also upload a video entry related to this topic through the link below:
https://encyclopedia.pub/user/video_add?id=16447
Check Note
2000/2000
Aloe vera Gel
Edit
This entry is adapted from 10.3390/agronomy9120831

Edible coating gels developed from the Aloe vera plant have been used as a traditional medicine for about 3000 years. Aloe vera contains approximately 110 potentially active constituents from six different classes: chromone and its glycoside derivatives; anthraquinone and its glycoside derivatives; flavonoids; phenylpropanoids and coumarins; phenylpyrone and phenol derivatives; and phytosterols and others. Apart from medicinal uses, Aloe gels have an important role in food preservation as edible coatings. They provide an edible barrier for atmospheric gases and moisture and help to reduce the respiration and transpiration of fresh produce, which helps to preserve its postharvest quality.

Food quality mainly refers to three attributes: external (size, color, appearance, etc.), internal (taste, color, juicy, texture, seedless, etc.), and hidden (food safety and nutritional contents). External and internal quality attributes were of greatest importance to consumers for many years. However, since the occurrence of food-derived health problems has begun to increase, consumers have started to pay more attention to the hidden quality attributes of fresh produce and are asking for food to be free of chemical residues [1]. Fungicides and other agrochemicals are of great importance in controlling postharvest diseases and have crucial role for the preservation of the postharvest quality, but misuse and/or excessive use of them might cause negative impacts on human health [2][3]. There is an increasing effort in postharvest studies to develop natural preservatives and antimicrobials to extend the storage duration of foods without chemical preservatives [4][5]. So far, many storage techniques and natural preservatives have been developed to extend the postharvest life of foods. The currently utilized natural preservatives are chitosan [6][7], essential oils [8][9], propolis extract [10], plant extracts [11][12], edible coatings [13][14], and organic salts [15]. Among these, edible coatings have been receiving more attention in recent years due to their potential for developing edible packaging materials [16]. Weight loss, changes in textural quality, changes in chemical structure, and microbial pathogens (mostly fungus) are the most important postharvest problems for foods [17][18].
Aloe belongs to the family of Xanthorrhoeaceae, which consists of about 420 species, and has been used as a traditional medicine for about 3000 years [19]. The perennial plant known as Aloe vera is Aloe barbadensis Miller, which is a well-known pharmaceutical herb that has long been used in traditional Chinese medicine for the treatment of various diseases. It is widely distributed in the semitropical regions and cultivated in many provinces of China.

The two-main class active constituent of the Aloe vera plant extract are chromone and anthraquinone and its glycoside derivatives, alongside others such as phenylpyrone derivatives, flavonoids, phenylpropanoids, coumarins, phytosterols, naphthalene analogs, lipids, and vitamins.

2.1. Chromone and its Glycoside Derivatives 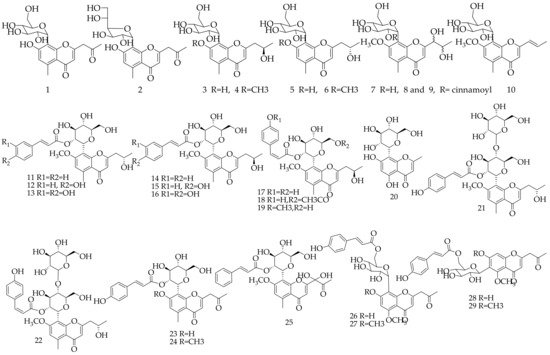 2.2. Anthraquinone and its Glycoside Derivatives 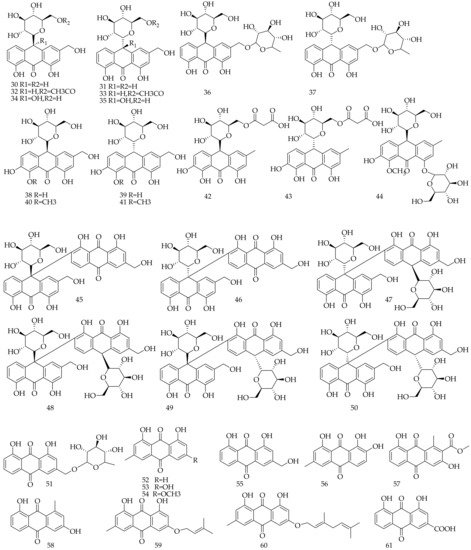 Approximately 13 flavonoids and their glycoside derivatives were isolated and identified from Aloe vera (Table 3, Figure 3), including three types; namely flavone (62–67), flavonol (68–72), and flavan-3-ol (73,74). 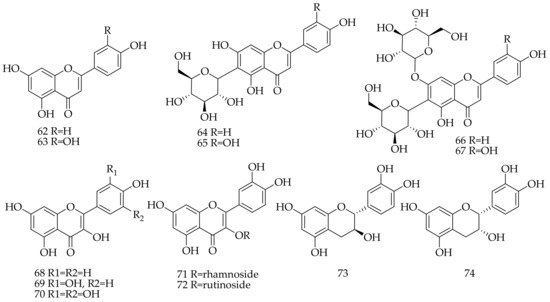 Approximately 12 phenylpropanoid acids and their ester derivatives (75–86), and four coumarins (87–90), were isolated and identified from Aloe vera (Table 4, Figure 4).

Aloe vera plant extracts have antimicrobial characteristics that kill microorganisms (including bacteria (antibacterial activity), fungi (antifungal activity), and viruses (antiviral activity)) or stop their growth. Fruit decay is an important parameter influencing the postharvest quality of fresh produce. Previous studies have shown that the use of Aloe vera gel as an edible coating has positive effects on the prevention of fruit decay and microbial spoilage. The inhibitory effects of Aloe vera gel on the growth of mycelium (Penicillium digitatum and Aspergillus niger) was reported by Nabigol and Asghari [45], who performed a range of laboratory tests. They suggested that the inhibition of the mycelium growth rate increased with gel concentration. The 500 mL/L dose of Aloe vera gel was found to cause 100% inhibition of P. digitatum and 64% of A. niger. According to the findings of Kator et al. [46], 20%, 60%, and 100% concentrations of Aloe vera gel are effective in preventing the occurrence of decay in tomato fruits for seven days of storage. However, these authors suggested that a 100% concentration has significantly higher effects, and the positive impact may continue for 16 days of storage. Benitez et al. [47] reported that Aloe vera gel provides higher efficacy for the prevention of mesophilic bacteria and yeasts and molds than alginate and chitosan for kiwifruit slices. In another study, the shelf life of guava was reported to be increased by about one more week with the application of an Aloe vera gel coating, due to the fact that the edible coating prevents microbial growth [48]. Sitara et al. [49] conducted a comprehensive study regarding the antifungal activity of Aloe vera gel at three different doses against five plant pathogenic fungi: A. niger, Aspergillus flavus, Alternaria alternata, Drechslera hawaiensis, and P. digitatum. The highest test dose (0.35%) of Aloe vera gel was reported to completely inhibit the growth of Drechslera hawaiensis and Alternaria alternata. In another study, the minimum fungicidal concentrations of Aloe vera against Botrytis gladiolorum, Fusarium oxysporum f.sp. gladioli, Heterosporium pruneti, and Penicillium gladioli were reported to vary between 80 and 100 μL/mL, depending on the fungal species [50].
Previous studies have also shown that the combination of Aloe vera gel with some homogenizers, such as glycerol starch (0.15 g), improves the efficacy in controlling fungal decay and weight loss in cherry tomatoes [51]. The specific mechanism of action is still unknown, but it is known that saponins, acemannan and anthraquinone derivatives, which are found in Aloe vera, have antibacterial activity [52]. Navarro et al. [53] performed a study with Aloe vera gel alone or in combination with thymol on nectarines and reported that the Aloe vera gel alone is more efficient in prevention of the decay caused by Rhizopus stolonifer, B. cinerea, and P. digitatum. Aloe vera gel coatings were previously tested against decay and found to significantly lower counts for molds, yeast, and mesophilic aerobics in different fruits and vegetables, including tomatoes [54][55], citrus fruits [56][57], raspberry fruits [58], blueberries [59], strawberries [60], and ready-to-eat pomegranate arils [61]. The preharvest application of Aloe vera gel treatment was also previously tested and found to be effective in postharvest storage; specifically, it was found to reduce the decay incidence of table grapes [62][63].
In a different study [64], Aloe vera leaf gel was found to inhibit the growth of two bacteria: Shigella flexneri and Streptococcus progenes. The antibacterial activities of A. vera gel was also reported by Wang et al. [65] and Cellini et al. [66] against Heliobacter pylori. Moreover, antiviral activities of A. vera have also been of interest to many researchers, wherein its positive influence has been reported against herpes simplex virus (HSV) type 2 strains by Zandi and Rastian [67] and against influenza A virus replication by Li et al. [68].

More
© Text is available under the terms and conditions of the Creative Commons Attribution (CC BY) license (http://creativecommons.org/licenses/by/4.0/)
Upload a video for this entry
Information
Subjects: Food Science & Technology
Contributor MDPI registered users' name will be linked to their SciProfiles pages. To register with us, please refer to https://encyclopedia.pub/register :
Chunpeng Wan
View Times: 62
Revisions: 2 times (View History)
Update Time: 29 Nov 2021
Table of Contents
1000/1000
Hot Most Recent