Submitted Successfully!
Thank you for your contribution! You can also upload a video entry related to this topic through the link below:
https://encyclopedia.pub/user/video_add?id=16367
Check Note
2000/2000
Skull Vibration Induced Nystagmus
Edit
This entry is adapted from 10.3390/audiolres11040050

The nystagmus ceases at the offset of the vibration with no afternystagmus. Video recordings show the nystagmus is comprised of slow phase eye velocity (SPV) deviations away from the healthy ear, interspersed with oppositely directed quick return phases (QPs) away from the lesioned ear. The SPV and QP are driven by different neural mechanisms [1]. The quick phases are easily detectable by the clinician at the bedside (with Frenzel glasses) but quantifying the slow phase eye velocity requires three dimensional recordings (horizontal, vertical, and torsional) of the eye movement by scleral search coils or video as shown in Figure 1 from [2].

With SVIN, the startling result is that the direction of the nystagmus is the same for stimulation of either mastoid! As a control: the same procedure in healthy subjects does not elicit such a consistent nystagmus with slow phase eye velocity above 2.5 deg/s [2]. The first question is what vestibular receptors are being activated by mastoid vibration, and the physiological evidence for that is summarized below [3][4]. The second question is why such activation results in nystagmus and a simple, evidence-based, “imbalance model” of nystagmus generation is presented. The third question is to explain the exact direction of the slow phase eye velocity component of the nystagmus and to do this herein refer to the results of selective stimulation of nerves from single canals (or combination of canal nerves [5]). These data are used to explain the results from 3-D eye movement measurement of SVIN in different categories of human testing. Many characteristics of SVIN have been documented by Dumas and his colleagues [2][6][7][8] and the main features are summarized in Table 1 .

Table 1. A summary of the main characteristics of the SVIN response of patients with total unilateral vestibular loss (TUVL) summarized from [2] and related papers by the Dumas group.

Recordings from single vestibular afferents in guinea pigs have shown that low frequency skull vibration (100 Hz) is an effective stimulus activating those semicircular canal and otolith neurons with irregular resting discharge.   When activated by 100Hz vibration, the irregular canal afferents are activated and at 100 Hz, fire one action potential per cycle, synchronized with the stimulating frequency. This synchronization (called phase-locking) shows that each cycle of the vibration is the effective stimulus for the receptor and afferent, and it explains why the SPV of SVIN depends on vibration frequency (at least up to 100 Hz). Phase-locking of canal neurons to the vibration stimulus explains the abrupt stimulus-locked onset and offset of SVIN without any afternystagmus. The application of a 100 Hz vibration stimulus to the mastoid causes an immediate large increase in primary neuronal firing rate which in TUVL patients would quickly drive the eyes away from the healthy side (slow phase) interspersed with QPs away from the affected ear. At stimulus offset there is a very abrupt return to resting activity [3] which causes an abrupt restoration of average VN neural activity and so an abrupt cessation of eye movements.

Based on physiological results, both neural and oculomotor, I have proposed the following simplified “imbalance principle” of nystagmus generation :

Nystagmus Is Due to an Asymmetry of Average Neural Activity between the Two Vestibular Nuclei (VN).

Figure 2 explains how this principle can account for the major results of vibration induced nystagmus. 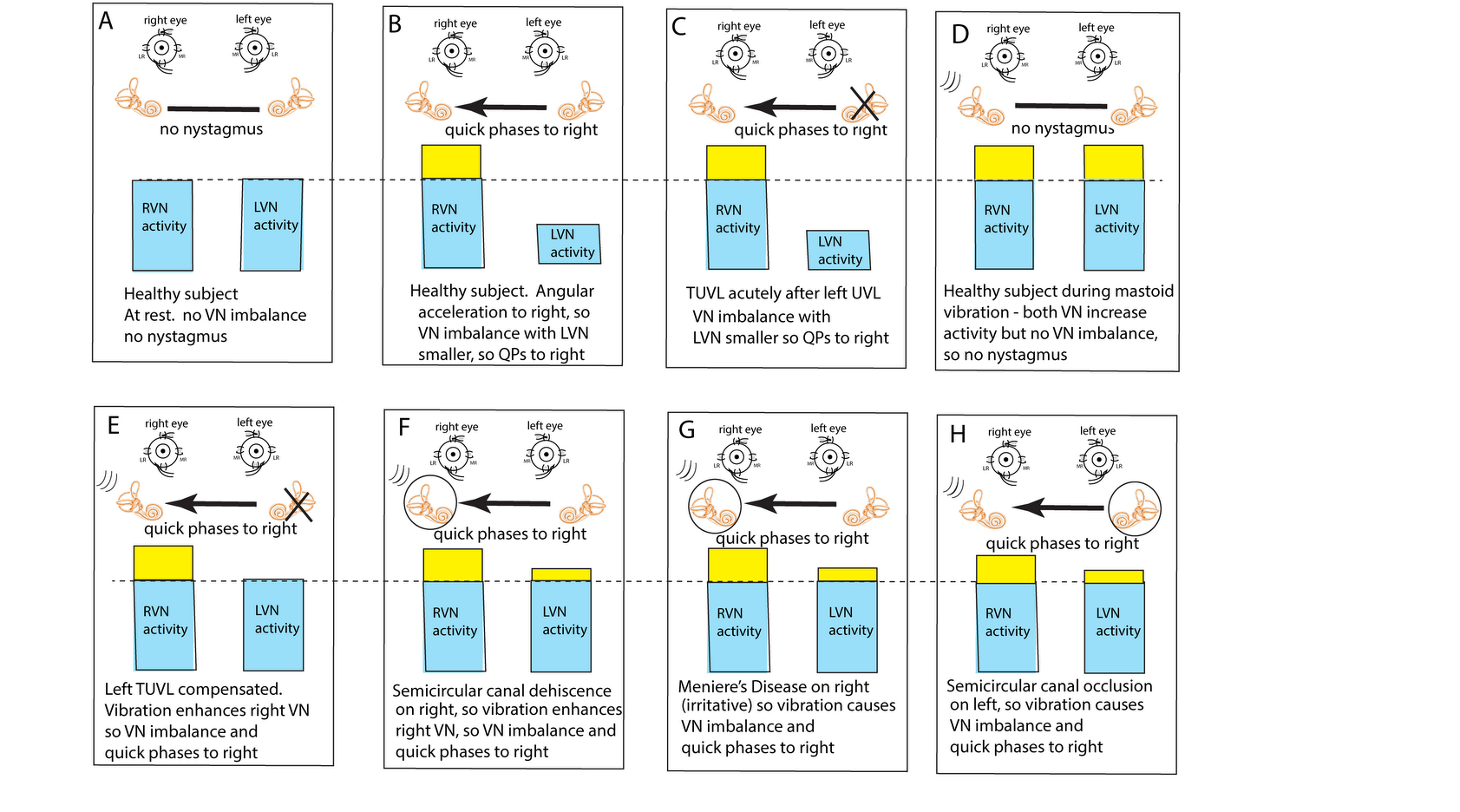 Figure 2. The “imbalance principle”—showing the relative average neural activity of the two vestibular nuclei (VN—histograms) in various stimulus conditions resulting in nystagmus with the direction shown by the black arrow. The yellow areas show the increased activity resulting from the procedure. These histograms are representations of the level of neural activity in the vestibular nuclei in eight separate conditions (A–H). The thin dashed line represents the average level of activation of a healthy subject at rest. The three lines (in D–H) indicate the vibration stimulus which, even thoughit is applied to only one labyrinth, is an effective stimulus to both labyrinths simultaneously because of the fast efficient conduction through the skull. The circled labyrinths in (F–H) show the affected labyrinth in a patient.

In healthy people it is presumed that the average neural activity in the two vestibular nuclei (VN) is in balance (Figure 2A) and so there is no nystagmus. A horizontal angular acceleration to the right (Figure 2B) will activate the right VN and simultaneously decrease the activity of the left VN. This imbalance results in nystagmus with slow phase eye velocity away from the right side and quick phases towards the right side (black arrow). A clinician perceives the quick phases and so the nystagmus appears to beat towards the right side (and away from the left side).

A patient acutely after left unilateral loss (Figure 2C) has a large imbalance in neural activity so quick phases beat to the right. If a healthy person is subject to vibration of either mastoid it will generate increased neural activity in both VN (Figure 2D) because canal neurons in both labyrinths will be activated, but there will be no asymmetry in average VN neural activity and so no nystagmus.

This imbalance principle explains why mastoid vibration causes SVIN after a patient with TUVL has compensated (and so has minimal or absent spontaneous nystagmus (Figure 2E)). That absence of nystagmus implies that the average neural activity in both VN is about equal before vibration stimulation. The 100 Hz unilateral mastoid vibration stimulus on the healthy side will activate semicircular canal receptors and irregular afferents projecting to and activating the VN on the healthy side. However, there is no afferent neural input from the opposite (lesioned) labyrinth, so there is an imbalance in average neural activity between the two VN resulting in nystagmus with QPs directed away from the lesioned side. Stimulation of the mastoid of the affected ear will cause the vibration stimulus (represented by three lines near right labyrinth in Figure 2D–H) to be transmitted through the skull very effectively and so this contralateral vibration stimulation will activate the canal and otolith receptors on the remaining (healthy side) and so will also result in an average neural imbalance between the two VN and so SVIN in the same direction for stimulation of either mastoid.

Semicircular canal neurons show progressively poorer response to vibration as the vibration frequency is increased above 100 Hz. However, a dehiscence of the semicircular canal (SCD) increases the fluid displacement caused by the stimulus [9]. so high vibration frequencies such as 500 Hz will generate fluid displacements large enough to deflect the cilia and so sufficient to activate previously unresponsive afferents at 500 Hz [3]. Semicircular canal neurons which were unresponsive to 500 Hz vibration with an intact bony labyrinth, respond vigorously to vibration at 500 Hz (and higher frequencies) after an experimental SCD [3][10]. Correspondingly human SCD patients show SVIN to frequencies higher than the 100 Hz cut off in TUVL patients with intact bony labyrinths [8].
This imbalance principle also explains why in some SCD patients (Figure 2F) and some patients with MD (Figure 2G), vibration causes a reverse SVIN with the quick phases of SVIN beating towards the affected ear (the ear with the SCD or MD—the labyrinth circled in Figure 2) instead of away from the affected ear as occurs after TUVL. As a result of the enhanced semicircular canal neural response to vibration after SCD, unilateral mastoid vibration of a patient with an SCD will generate an imbalance between the two VN but now the VN on the side of the ear with the SCD will have a higher average firing rate than VN on the opposite side so, according to the imbalance principle, the quick phases will be driven towards the ear with the SCD since the VN on that side has the higher average neural activity (Figure 2F).
A similar account probably applies in some cases of MD; in the paralytic phase, MD may reduce the response of afferent neurons in the affected ear (and so result in imbalance of VN activity and SVIN with QPs away from the affected ear), but in the irritative phase the disease may enhance the response of afferent neurons [11][12][13] and so result in nystagmus with QPs towards the affected ear. In both SCD and the irritative phase of MD, it is, on this account, an enhanced response which causes the imbalance in neural activity between the two VN and so drives QPs towards the affected ear (Figure 2G).
Physically blocking the membranous duct of a semicircular canal (called canal occlusion) reduces the capacity of the canal receptors and afferents to respond to angular acceleration stimulation and so the gain of the human vestibulo-ocular reflex is significantly attenuated [14][15][16]. It is highly likely that the occlusion of a fully encased semicircular canal also reduces the response to low frequency skull vibration (although definite evidence of the effect of canal occlusion on the response of primary canal afferents to 100 Hz vibration (with intact bony labyrinth) has not yet been reported). So, the mastoid vibration in patients with unilateral semicircular canal occlusion would be expected to be attenuated and so result in a neural imbalance at the level of the VN. which would lead to SVIN with QPs away from the side of the occluded canal as has been reported [6] (Figure 2H).

Clinically these two conditions are diametrically opposed—in one case there is reduced function of one ear and in the other there is enhanced function of the opposite ear. This ambiguity is an especially pronounced problem in MD, where there can be either reduced or enhanced function even during a vertigo attack and the level of VN asymmetry probably varies during the vertigo attack [12][13] since the direction of the spontaneous nystagmus may reverse. Proper diagnostic interpretation of SVIN requires other clinical evidence in addition to the direction of QPs—e.g., evidence which independently indicates which is the affected side having lower function or enhanced function (e.g., spontaneous nystagmus, functional vestibular tests such as calorics or video head impulse testing, or low frequency hearing loss).