Submitted Successfully!
Thank you for your contribution! You can also upload a video entry related to this topic through the link below:
https://encyclopedia.pub/user/video_add?id=16116
Check Note
2000/2000
Maternal Nutrition and Neurodevelopment
Edit
This entry is adapted from 10.3390/nu13103530

Both experimental animal studies on the effects of micronutrients and macronutrients on offspring and human studies of pregnant women from cohorts with different nutritional conditions have contributed to current knowledge in the field of maternal nutrition. Diet and food choices define maternal nutritional status and directly influence fetal neurodevelopment. Maternal malnutrition, including undernutrition and overnutrition, can lead to altered neurodevelopment.

The role of maternal nutritional factors in fetal development emerged as an important research topic during the 20th century. Initial research on folate supplementation and its efficacy in reducing neural tube defects took place in the 1960s, setting the basis for recommendations regarding folate supplementation during pregnancy [1]. In the same decade, iron levels in pregnant women and the effects of oral iron supplementation were discussed, and eventually, researchers uncovered the role of iron deficiency anemia in fetal development [2]. Specifically, iron deficiency was associated with adverse outcomes, including preterm delivery, maternal mortality, and poor performance on developmental scales [2][3]. Afterward, relationships were defined between fetal development and additional nutritional elements, such as micronutrients and macronutrients, as the effects of deficiencies and supplementation of these elements were characterized with respect to long-term outcomes. This growing evidence for the importance of maternal nutrition was supported by Barker’s fetal programming hypothesis, which states that alterations in fetal nutrition have long-term effects on an individual’s health and predisposition to disease in adulthood [4].

Periconceptional and prenatal environments are critical for fetal brain development [4][5]. Maternal nutritional signals determine the epigenetic remodeling of fetal genes, and these effects persist through implantation, influencing placental development and nutrient transference [6]. Neurulation occurs early in embryonic life, beginning on day 18 after conception and continuing until day 28 [7]. A series of cellular events takes place, including neurogenesis from day 42 to mid-gestation, which is followed by migration, differentiation, synapse formation, and apoptosis [8]. Although brain development continues during the postnatal period, the fetal brain is especially susceptible to stimuli and insult due to rapid change, high sensitivity to the environment, and the prolonged duration of the brain developmental process [7].

Both experimental animal studies on the effects of micronutrients and macronutrients on offspring and human studies of pregnant women from cohorts with different nutritional conditions have contributed to current knowledge in the field of maternal nutrition. Diet and food choices define maternal nutritional status and directly influence fetal neurodevelopment [9]. Malnutrition, including undernutrition and overnutrition, can lead to altered maternal nutrient use. Fetal neurodevelopment is characterized by significant periods of rapid growth and structural change, accompanied by high metabolic and nutritional requirements. Thus, a fetus may be more susceptible to nutrient deficiencies and exposure to toxins depending on the timing, severity, frequency, and duration of exposure, as well as factors related to individual resilience [9].

The aim of this study was to evaluate how maternal nutrition, and specifically the intake of micronutrients, macronutrients, and vitamins in pregnant women, influence neurological development in offspring. 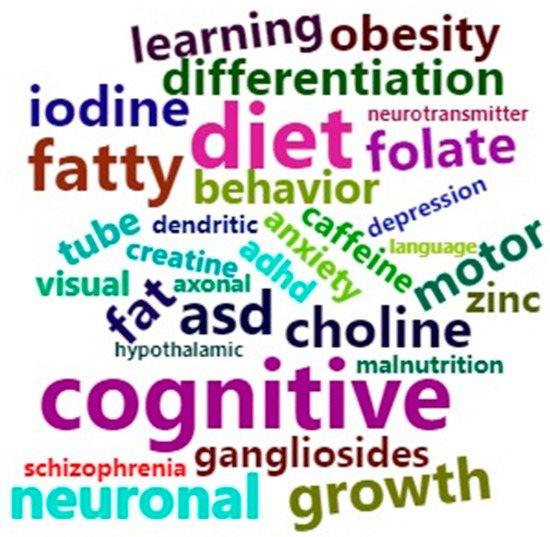 Figure 1. Graphical representation of the nutrients and neurodevelopmental outcomes most frequently encountered during the review. The chosen terms were based on the extraction of data from all included articles using the R cloud program. 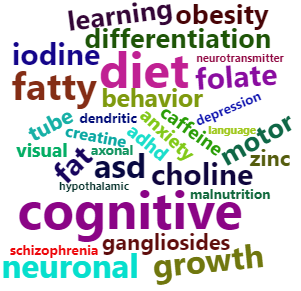 An unsupplemented maternal diet may be insufficient in terms of the required nutrients for optimal fetal health. Furthermore, mothers who eat vegan diets tend to have a reduced intake of several important compounds (such as zinc and creatine). Researchers have established inadequate micronutrient intake levels (deficiency and excess) and their outcomes in terms of neurodevelopment. For instance, iron has been implicated in neurogenesis, and iron deficiencies have been associated with memory alterations and neurodevelopment impairment. These outcomes persist even after postnatal iron repletion. Furthermore, iodine deficiency has been described as the leading cause of preventable impaired mental function worldwide, with outcomes ranging from congenital anomalies and endemic cretinism to subclinical cognitive and motor function deficits. Folate supplementation is known to play a role in protecting against neural tube defects, and it is implicated in cognitive function and learning abilities. Vitamin A is crucial for organogenesis, neural patterning, neuronal differentiation, neurite outgrowth, and axonal elongation. It is of special consideration that levels above 10,000 IU have been related to teratogenesis. Choline deficiency is common during pregnancy, and it is known to alter neurogenesis and angiogenesis in the fetal hippocampus. Furthermore, some studies have shown an association between choline deficiency and neural tube defects. Copper and creatine deficiencies during pregnancy are rare, and evidence regarding their role in neurodevelopment is scarce. Considering the effects of these compounds on physiological adaptation and fetal developmental processes, micronutrient supplementation is recommended during pregnancy.

Prenatal maternal intake of macronutrients plays a significant role in offspring neurodevelopment. Fatty acids, especially PUFAs ( Omega-3 and Omega-6) and DHA, are strongly related to neuronal functioning, such as synapse maturation and myelination during development. Insufficient fatty acids during development can increase the risk of low IQ; altered visual acuity; and altered cognitive, language, and motor development. Furthermore, higher levels of DHA, arachidonic acid, and PUFAs are associated with better neurological postnatal outcomes, especially in terms of neuromotor abilities. However, supplementation is still under debate. Protein consumption and its effect on neurodevelopment is also unclear, although some studies have suggested a positive relationship between adequate protein consumption and motor development. Furthermore, decreased protein consumption might be related to neuropsychiatric disorders.

Finally, different types of diets during gestation may have consequences on offspring neurodevelopment. Undernutrition during gestation has been related to the altered growth and maturation of brain structures, especially the amygdalae, prefrontal cortex, hypothalamus, and autonomic nervous system. In contrast, overnutrition, which is related with high fat and carbohydrate diets, is related to inflammatory processes that can be deleterious to offspring brain development. These types of diets are associated with cognitive impairment and neuropsychiatric disorders, such as depression, ADHD, ASD, and anxiety. More studies are needed to address the benefits and risks of supplementation of each nutrient during pregnancy, with the goal of establishing strong recommendations. Overall, inadequate maternal intake of micronutrients and macronutrients can have significant short- and long-term effects on neurodevelopment in offspring.

More
© Text is available under the terms and conditions of the Creative Commons Attribution (CC BY) license (http://creativecommons.org/licenses/by/4.0/)
Upload a video for this entry
Information
Subjects: Neurosciences
Contributor MDPI registered users' name will be linked to their SciProfiles pages. To register with us, please refer to https://encyclopedia.pub/register :
Claudia Talero-Gutierrez
View Times: 42
Revisions: 2 times (View History)
Update Time: 23 Nov 2021
Table of Contents
1000/1000
Hot Most Recent