Submitted Successfully!
Thank you for your contribution! You can also upload a video entry related to this topic through the link below:
https://encyclopedia.pub/user/video_add?id=16035
Check Note
2000/2000
Vaccine versus Variants
Edit
Upload a video
This entry is adapted from 10.3390/vaccines9111305

With the emergence and spread of new SARS-CoV-2 variants, concerns are raised about the effectiveness of the existing vaccines to protect against these new variants. Although many vaccines were found to be highly effective against the reference COVID-19 strain, the same level of protection may not be found against mutation strains.

As of 31 August 2021, 217 million infections and more than 4.5 million deaths [1] have been attributed to SARS-CoV-2, commonly referred to as the COVID-19 pandemic. The worldwide impacts on sectors including the economy [2] and public health [3] were catastrophic due to public restrictions and lockdown. A potential solution for ending the pandemic was introduced by the emergence of safe and effective vaccines [4]. Early clinical trials for many vaccines were reported to be highly effective against the reference SARS-CoV-2 variant [4][5] and more than 5 billion vaccine doses have been administered by 31 August 2021 [1]. However, once new variants of the virus were discovered in the population, there has been a growing concern regarding the level of protection ensured by vaccines. A mathematical modeling demonstrated the possibility of acquiring a high level of immunity in the population if the vaccine efficacy is maintained across the different strains [6]. The level of vaccine efficacy required to reach a communal level of protection poses a challenging question. According to computational modeling and simulation experiments, a minimum of 60% vaccine efficacy is required to end an ongoing epidemic if the vaccination coverage is 100% [7]. However, given that a 100% vaccine coverage is highly unlikely due to various reasons including vaccine hesitancy and shortages in many parts of the world, the required efficacy increases further. The same study simulates that 80% efficacy is required for a vaccine coverage of 75% to end an ongoing epidemic. According to another analysis, efficacy of 50% or greater could substantially reduce incidence of COVID-19 in vaccinated individuals and would offer useful herd immunity [8]. Therefore, it is essential to find out if the current vaccines can offer the desired level of efficacies amid the increasing transmission of newer SARS-CoV-2 variants of concerns.
In many parts of the globe, the variants now constitute the majority of the COVID-19 cases [9]. Figure 1 illustrates the four variants of concerns in the United States (US) along with their first detection location, level of spread, and effects using data from the Centers for Disease Control and Prevention (CDC) [10]. 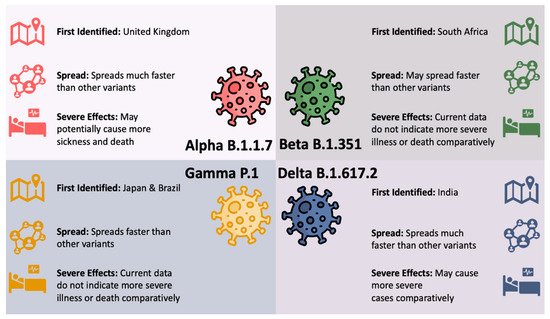 Figure 1. SARS-CoV-2 Variants of Concern in the US.
Viruses constantly evolve by mutations and therefore the detection of SARS-CoV-2 variants are not unexpected. However, the appearance of these new and potentially more infective SARS-CoV-2 variants can make it more challenging to end the global pandemic [11][12]. The B.1.617.2 (Delta) and B.1.1.7 (Alpha) variants are found to be more infectious and can lead to more community transmission. The increase in viral transmission can consequently result in the emergence of more variants. Large-scale vaccine deployment is considered an important tool against these variants [11]. As such, it is essential to know the effectiveness of the COVID-19 vaccines especially against the new variants of concerns. The lack of data on the efficacy of vaccines against the new variants creates an uncertainty that can prolong the pandemic [13].

Given that B.1.1.7 was the earliest variant to be designated a VOC, more data of vaccine efficacy is available for this variant than any other. A total of 21 of the 35 (60%) studies reported vaccine efficacy against this variant.
Several articles reported efficacies from Phase 2 and 3 clinical trials ([14][15][16]). The efficacies range from 70.4% and 85.6% against B.1.1.7 for AstraZeneca and Novavax vaccines. The Novavax Phase 3 trial was conducted between 28 September and 28 November 2020, on 16,645 adults aged between 18 and 84 years in the UK [14]. A Post hoc analysis showed that the efficacy against the Alpha (B.1.1.7) variant was lower than the non-B.1.1.7 variants, the majority of which are likely to be the reference strain given the study period. The efficacy against the Alpha variant was 86% whereas the efficacy against the non-Alpha variants were higher at 96.4%. The results from this clinical trial are further confirmed by E. Mahase [16]. A Phase 2 trial for the AstraZeneca vaccine [15] with 8534 adults aged 18 or older from 31 May and 13 November 2020, in the UK also confirmed a lower efficacy for B.1.1.7 through post hoc analysis. A vaccine efficacy of 70.4% was reported against the Alpha variant whereas the efficacy was higher at 81.5% for non-Alpha variants.
From the observational studies, a wider range of efficacies are reported. The efficacy of a single dose vaccine was reported to be as low as 29.5% for BNT162b (Pfizer–BioNTech) [17] and as high as 88.1% for mRNA-1273 (Moderna) [18]. Similar variability is observed for two doses of vaccines where the lowest efficacy reported was 74.5% for two doses of ChAdOx1 nCoV-19 (AstraZeneca) vaccine [19] and the highest efficacy of 100% for mRNA-1273 (Moderna) [18]. Efficacy of 50% or greater is substantial and would offer useful herd immunity [8]. Overall, the results indicate that two doses of any reported vaccines provide good protection against B.1.1.7. Full vaccination (two doses) offers strong protection against Alpha with 13 out of 15 studies reporting more than 84% efficacy and a single dose offers reasonable protection with 10 out of 12 studies reporting greater than 54% efficacy. Moreover, the efficacies reported by the mRNA vaccines (BNT162b and mRNA-1273) appear to be slightly higher comparatively. Furthermore, protection against B.1.1.7 is estimated to be higher than B.1.617.2 [20]. An analysis of 76 breakthrough cases after full vaccination in metropolitan New York was presented by R. Duerr et al. [21]. It was observed that 4 of the 7 hospitalized cases were infected with the Alpha variant, including 1 death. The study also reported that the vaccines offer strong protection against B.1.1.7 statistically but the level of efficacy was not quantified.

Both E484K-positive mutations, B.1.351 (E484K and K417N) and P.1 (E484K and K417T) were reported together in several studies.
Several phases 1–3 clinical trials reported efficacies against the Beta (B.1.351) variant ([16][22][23][24]). The lowest efficacy reported is 49.4% with at least one dose of NVX-CoV2373 [22] and the highest efficacy is 100% for two doses of BNT162b2 [24]. The NVX-CoV2373 Phase 2A,B randomized, observer-blinded controlled trial was conducted in South Africa between 17 August and 25 November 2020 [22]. The overall vaccine efficacy was 49.4% but was slightly higher at 51.0% in HIV-negative participants. No serious adverse effects were reported as being related to the vaccine. E. Mahase [16] reported an efficacy of 60% for the NVX-CoV2373 trial against the B.1.351 variant. A Phase 3 randomized, double-blind, placebo-controlled trial for a single dose of Ad26.COV2.S vaccine was conducted in several countries including US, Brazil, and South Africa [23]. The trial period was between 21 September 2020, and 22 January 2021. The study included 4969 participants from South Africa, where the B.1.351 variant was dominant. The vaccine efficacy from the South Africa group was 52.0% for moderate to severe-critical COVID-19 after 14 days of administration and increased to 64.0% after 28 days. Serious adverse effects not related to COVID-19 were only reported by 83 out of 21,895 vaccine recipients constituting 0.4% of the population and 96 out of 21,888 placebo recipients constituting 0.4% of the population. A Phase 2 observer-blinded controlled trial for BNT162b2 was conducted between July and October 2020 and included 45,411 participants aged 16 or older from US, Argentina, Brazil, South Africa, Germany, and Turkey [24]. Although a 91% overall efficacy was reported, the efficacy specifically for the South African group with predominantly B.1.351 variant in circulation was reported to be 100%. The paper also reported new adverse events attributed to the BNT162b2 vaccine not identified in earlier reports. These adverse events decreased appetite, lethargy, asthenia, malaise, night sweats, and hyperhidrosis. The study however has not been peer-reviewed at the time of writing. Moreover, for fully vaccinated individuals, 4 out of the 7 studies reported efficacies between 22 and 60%, and 3 reported efficacies between 75 and 100%. Therefore, more data are needed for convincing evidence.
The efficacies reported against Gamma (P.1) variant is all from observational studies. Three of the involved studies reported efficacies for the P.1 variant exclusively ([25][26][27]). Protection against this variant is indicated to be lower ranging from 12.5% for a single dose of CoronaVac [26] and 61% for a single dose of mRNA vaccine (BNT162b2 and mRNA-1273) [25]. Both studies on the CoronaVac vaccine against the P.1 variant were conducted in Brazil ([26][27]). The test negative case-control study [26] included 43,744 adults aged 70 years or older between 17 January and 29 April 2021. For two doses of CoronaVac, the vaccine efficacy against COVID-19 infection was only at 46.8%. However, the adjusted effectiveness against COVID-19 hospital admissions and deaths was 55% and 61.2% respectively. The study by M. D. T. Hitchings et al. [27] meanwhile included 106,329 healthcare workers aged 18 years or older between 19 January and 25 March 2021. The adjusted vaccine effectiveness was 49.6% after the first dose of CoronaVac. However, the effectiveness reported after two doses was unusually lower at 36.8%. This study was not peer-reviewed at the time of writing. Overall, the limited data available against the P.1 variant indicates lower protectiveness. The highest efficacy was only 61% with a single dose of mRNA vaccine but can be expected to be higher with full vaccination.
For studies reporting efficacies of both B.1.351 and P.1 variants together ([28][29][30]), the reported efficacies for double dose mRNA vaccines are 84%, 88%, and 77% respectively. The high efficacies against both variants combined seem to indicate slightly greater protection against B.1.351 compared to P.1. This conclusion can be drawn solely based on the efficacy results available exclusively against the two variants where the range of efficacy against the B.1.351 variant was between 22% and 100% and the range of efficacy against the P.1 variant was between 12.5% and 61%.

Among the variants considered, the Delta (B.1.617.2) variant is the latest to be designated as a VOC. Consequently, only 30% of the research reporting vaccine efficacies against this variant is from peer-reviewed literature and no data from a clinical trial is available at the time of writing.
Several studies have indicated a drop in protection against the Delta variant. Vaccine efficacy for Mesa County, Colorado was reported to be 78% with Delta being the prevalent variant [31]. In contrast, for the same period of time, efficacy from the other Colorado counties was 89% where the Delta variant was comparatively lower. Similarly, S. Y. Tartof et al. [32] indicated lower protection against Delta (75% efficacy) compared to other variants (91% efficacy). A sharp decline in vaccine effectiveness is reported after the Delta variant became prevalent with the effectiveness reducing from 91% to 66% [33]. This is also indicated by A. Puranik et al. [20] where a sharp decline in efficacy is observed from July 2021 when the Delta variant replaced the Alpha variant as the dominant variant (Figure 2). 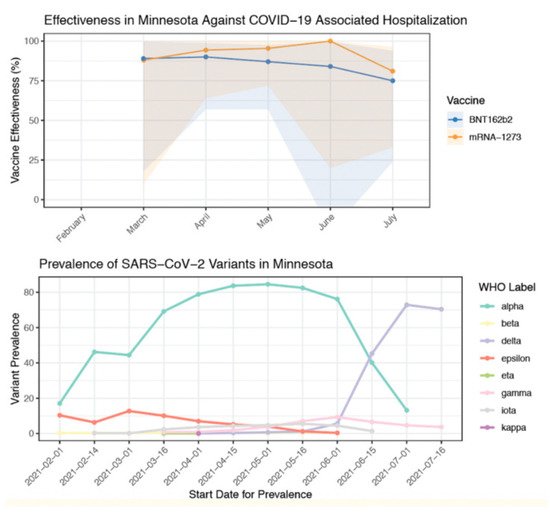 Studies of vaccine’s effectiveness have been considered a key factor for any vaccine’s evaluation to ensure higher degree of protection. These studies are more relevant for viruses that continuously mutate to new variants were vaccine’s efficacities might decline with new derivations of the virus. Various research has been conducted to access the COVID-19 vaccine’s efficacies. However, no comprehensive study has been conducted to assess and compare efficiency of vaccines with various variants of COVID-19.
Results indicate that although efficacy is lower than the reference strain, the vaccines offer a good level of protection against the newer variants, especially with two doses. Protection against the Alpha variant is highest, followed by Beta and Gamma variants. Efficacy seems to be lower for the Delta variant from the limited data available. Results also indicate a good level of protection for the older population aged 60 or older. However, not enough data are available for other variants besides Alpha, Beta, Gamma, and Delta.