Submitted Successfully!
Thank you for your contribution! You can also upload a video entry related to this topic through the link below:
https://encyclopedia.pub/user/video_add?id=15686
Check Note
2000/2000
Short Vestibular and Cognitive Training for Dyslexia
Edit
Upload a video
This entry is adapted from 10.3390/brainsci11111440

Dyslexia is a common learning difficulty that does not compromise oral or nonverbal reasoning skills, and it is reported in 5–10% of school-aged children. In the literature, different theories have tried to explain the etiology of this disorder. Phonological impairment is the most known hypothesis for dyslexia; however, others researchers suggested that dyslexia could be due to cerebellar impairments. Interestingly, reading performance and arithmetic skills have been suggested to also be related to cerebellar activity. Several subsequent studies from our group and others examining postural performances in the dyslexia population supported this hypothesis, even if other researchers suggested that such an impairment occurred not only in dyslexia but also in subjects having other types of developmental disorders. A visual attentional deficit has also been reported by Facoetti et al.  and our group showed an abnormal oculomotor pattern in children with dyslexia. Based on these different theories, several researchers have tried to develop different training types in order to improve the reading abilities in children with dyslexia.

Importantly, we have to note that vestibular disabilities have been found to be related to various forms of cognitive impairments, such as visuospatial ability, attention, executive function, and memory [1][2]. Recently, our group [3] observed vestibular abnormalities in dyslexic children reported by deficits in the functional head vestibulo-ocular reflex. This reflex is specifically involved in the stabilization of the image on the retina during rapid movements of the head, and it plays an important role in the reading process [4]. These findings are in line with previous studies reporting that vestibular deficiencies could negatively affect sensory integrative functions such as balance, vision and reading in children [5].
Someone could ask the question of whether vestibular training could have a beneficial effect on reading performance in children with dyslexia, given that different types of vestibular training used in patients with vestibular loss improved not only the simple vestibular function (eliminating dizziness) but also executive functions like attention, visuo-spatial abilities and memory. Indeed, Sugaya et al. [6] tested whether a vestibular rehabilitation could improve both body stability and cognitive functions in a large group of adult subjects with dizziness. The vestibular rehabilitation program consisted of both head and eye exercises in a sitting or standing position, to develop strategies for improving the gaze stability by the cervico-ocular reflex. These authors reported a significant decrease of vertigo symptoms but also an improvement in the cognitive functions of these patients, supporting the evidence of the link between the vestibular system and cognition as suggested by the model by Ellis and colleagues [7]. 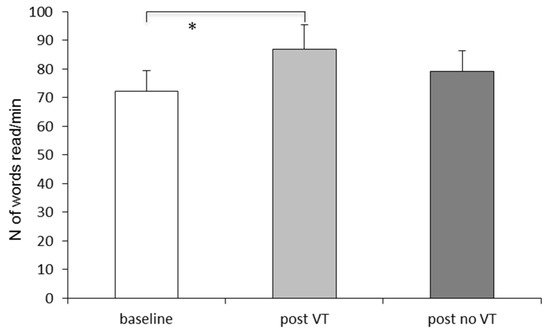 The main finding of this study is that a short vestibular and cognitive training period affects the reading speed in children with dyslexia, leading them to read more rapidly. Interestingly, such an improvement persists at least four weeks after the end of this training type. These findings are discussed below.
The different exercises of the vestibular and cognitive training used in the present study were developed in order to improve specific activities essential for the reading task. In order to reach a good reading performance, children have to stabilize their eyes on the text to read, and at the same time the visual and spatial attention as well as memory abilities need to work together and in a correct way in order to understand the text to be read. Indeed, these functions are fundamental to reading efficiently and are used by the child to connect letters and graphemes with the corresponding sounds and to understand the meaning of all words/sentences [8]. Several studies reported that in dyslexic children all these components were deficient; for instance, a poor gaze stabilization [9][10][11], impaired visual attention [12] and poor working memory [13] have been reported, and distinct training types reinforcing each of these abilities have been found to be efficient in order to improve the reading skills in dyslexic children (see Introduction).
The novelty of the training used in the present study is that we decided to reinforce the vestibular system together with all of the functions cited above. This study, even if is based on the reading speed only, suggested that this vestibular and cognitive training type on a tablet could be useful for dyslexic children in order to improve their reading performance. Note, however, that further studies will be necessary to explore whether this vestibular and cognitive training type could improve the reading and comprehension capabilities in children with dyslexia.
The finding of the present study also allows one to point out the role of the vestibular system in reading and more generally in cognitive capabilities. Indeed, even if the vestibular system has always been thought of as being important for balance control, being particularly responsible for head acceleration and generating vestibulo-ocular reflexes to stabilize the visual image on the retina [14], it also important for cognition, vision and perception [5][15][16], and several studies have already reported poor cognitive functions in subjects with vestibular deficiencies [17][18]. The working mechanism responsible for such an improvement cannot be described by the present behavioral study; however, the dorsal pathway has for a long time been considered important for attention and visual word recognition [19]. Further neurophysiological studies are needed to gain more insight into the cortical structures in charge of such changes.
Another finding of this study is that improvement in the reading speed persisted at least one month after training, suggesting that adaptive mechanisms could be responsible for such improvement, even if this hypothesis needs to be confirmed with MRI studies. This is an interesting result having important consequences in patient care, given that clinicians could use this vestibular and cognitive training for the rehabilitation of the reading speed in dyslexic children.