Submitted Successfully!
Thank you for your contribution! You can also upload a video entry related to this topic through the link below:
https://encyclopedia.pub/user/video_add?id=15182
Check Note
2000/2000
Bacteria–Cancer Interface
Edit
Upload a video
This entry is adapted from 10.3390/pathogens10101321

As a result of both intra and intergenomic diversification, H. pylori strains have shown to appear with a broad genetic diversity [1]. Certain strain-specific proteins such as vacuolating cytotoxin A (VacA) and cytotoxin-associated gene A (CagA) are shown to have increased risk towards carcinoma [2][3][4][5]. VacA is a channel forming toxin capable of inducing vacuoles into epithelial cells and has long been associated with the development of gastric inflammation [2]. While the exact oncogenic mechanisms have not yet been established, potential pathways have been suggested: VacA was found to cause apoptosis in gastro-epithelial cells leading to increased cell proliferation or a possible entry point for other carcinogens into the gastric mucosa [2]. VacA can activate the phosphoinositide 3-kinase (PI3K/AKT) pathway, resulting in the inhibition of glycogen synthase kinase 3 beta (GSK3β) via phosphorylation, with the subsequent dissociation of the GSK3β/β-catenin complex [6].

CagA activates the extracellular signal-regulated kinases/mitogen-activated protein kinase (ERK/MAPK) pathway through SHP2, resulting in morphological changes in the epithelium called hummingbird phenotype in a Ras-independent manner [7]. CagA also interacts with the E-cadherin/β-catenin complex resulting in nuclear accumulation of β-catenin leading to transdifferentiation of gastric epithelial cells [8]. The bacteria can induce the epithelial-to-mesenchymal transition (EMT) mediated by Snail, a transcriptional repressor of E-Cadherin expression, in gastric epithelial cells by GSK3β depletion [9]. The tumour suppressor TP53 undergoes proteasomal degradation leading to DNA damage in the presence of CagA [10]. Most interestingly, the transgenic expression of CagA in mice induces gastrointestinal and hematopoietic neoplasms, revealing the direct carcinogenic potential of the protein [5]. 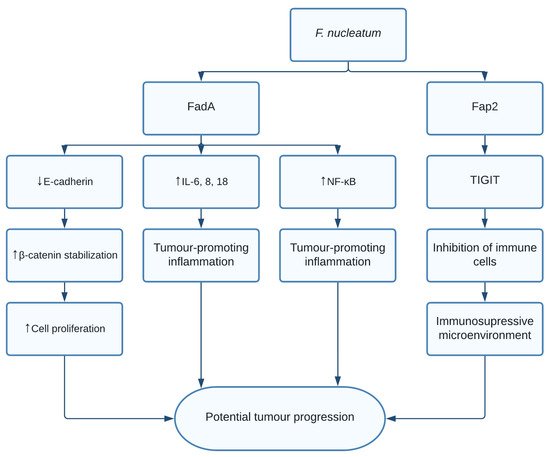 Although a rather large group of bacteria has been shown to be associated with different cancer types, only H. pylori is currently accepted as a group 1 carcinogen, reflecting how the bacterial cancer field has not received the same amount of attention as the viral field. While some bacteria such as E. coli , S. bovis, and C. trachomatis have long been associated with cancer, studies focused on bacterial factors that directly predispose infected tissue towards carcinoma have only recently been reported. The bacterial effectors that can inflict mutations and result in malignancies in the infected tissue are yet to be discovered.

Several bacteria mentioned are commonly found in the human microbiome, yet they are associated with cancer. If a bacterium is causal for cancer, why is the cancer not seen more frequently? Even though cancer is one of the well-funded and focused research areas, much is still to be discovered. For a cell to turn malignant due to chronic infectious disease, the cell must accumulate the respective mutations in the DNA, or these epigenetic changes might imprint memory to activate indefinite survival signals leading to cell proliferation. Most of the showcased bacteria are capable of inflicting one or more of these hallmarks to an otherwise normal cell, but unless all the hallmarks are acquired, i.e., “the perfect storm has hit”, the cell may not be a fully functional cancer cell. If the bacteria truly are linked to the cause of cancer, they are not likely the only causal factor but instead a contribution in the multistep process required to fulfil the hallmarks of cancer, leaving the rest of the hallmarks to be acquired by other causes, such as radiation, smoking, aging, or inheritance Thus these chronic infections can increase the fitness of cells towards carcinoma.

Since many studies show that bacteria could be located at the site of tumour development, it is also debatable whether the bacteria might colocalize in the transformed tissue due to the excess nutrient availability and increased vascularization. This affinity for tumour tissue is exploited by scientists, by using attenuated strains of bacteria as adjuvants in the treatment of various neoplasms. The bacterial tropism for tumour microenvironment could also activate the innate and adaptive immune response of the host to clear malignant cells.

More
© Text is available under the terms and conditions of the Creative Commons Attribution (CC BY) license (http://creativecommons.org/licenses/by/4.0/)
Upload a video for this entry
Information
Subjects: Microbiology
Contributor MDPI registered users' name will be linked to their SciProfiles pages. To register with us, please refer to https://encyclopedia.pub/register :
Karthika Rajeeve
View Times: 48
Revisions: 5 times (View History)
Update Time: 26 Oct 2021
Table of Contents
1000/1000
Hot Most Recent