Submitted Successfully!
Thank you for your contribution! You can also upload a video entry related to this topic through the link below:
https://encyclopedia.pub/user/video_add?id=14827
Check Note
2000/2000
HPV/HIV Oncogenomics In Cervical Cancer
Edit
This entry is adapted from 10.3390/ijms221810115

Histologically, cervical cancer can be divided into two main types, squamous cell carcinoma (SCC) and adenocarcinoma (AC). SCC is the most common type accounting for over 70% of all cases. Cervical cancer can be attributed to various risk factors, and these include smoking, alcohol consumption, multiple sexual partners, unprotected sex, socioeconomic status, a family history of cervical cancer, extended use of oral contraceptives, human immunodeficiency virus (HIV) infection and persistent human papillomavirus (HPV) infection.

Several extrinsic dynamics pose a threat in the fight against cervical cancer in LTMICs. Such factors include gender inequality, inequitable laws and inappropriate traditional practices and violence between intimate partners. These factors are unfavourable to women, limit women’s access to information, education, employment, opportunities and access to social and health services. Increased HPV and HIV co-infection has been frequently documented. Unfortunately, African women are mostly affected by this catastrophic dual viral infection. Globally, young women <35 years in the sub-Saharan African (SSA) region make up ~60% of HIV infection prevalence and almost 70% of newly acquired infections in Africa. With no proper interventions in place, the World Health Organization (WHO) estimates that cervical cancer deaths will double to over 400,000 by 2030, and the SSA region will make up 90% of the cases resulting in mortality [17][19].

Cancers associated with viral infections are on the rise globally, and in SSA [18][21] ( Figure 1 ). Approximately a third of all cancers in Africa are linked to a viral etiology [22]. Viruses such as HPV are generally dependent on the cellular machinery of the host for replication [18]. As a result of this, the splicing machinery of the host is also compromised upon HPV infection. As an oncovirus, HPV infection will result in the synthesis of splice variants of viral and cellular mRNA that favour cell survival mechanisms such as excessive cell proliferation, immune response evasion and inhibition of tumour suppressor proteins [3][23]. This review focuses on the link between cellular splicing machinery, HPV/HIV infection and the aberrant alternative splicing events that take place in HIV/HPV-associated cervical cancer. Finally, we investigate how these aberrant splicing events can be targeted for the development of new therapeutic strategies against HPV/HIV-associated cervical cancer. 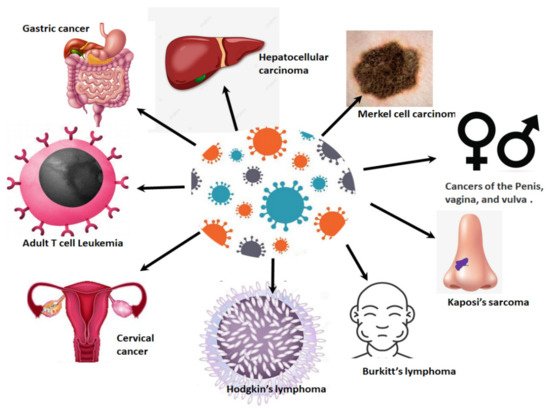 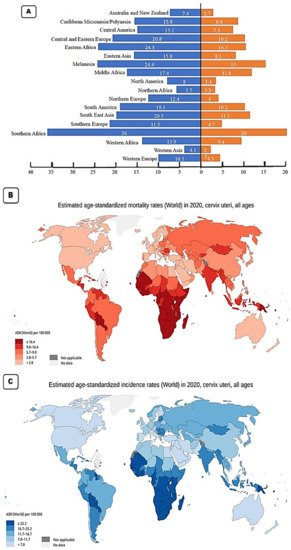 More than 200 genotypes of HPV based on their sequence can be divided into α, β, γ, δ, µ genera [4][6]. The HPV E1 and E2 proteins are early viral proteins required for the viral DNA replication and protein synthesis. In addition, E2 also regulates the expression of E6 and E7, while E4 and E5 help in viral assembly and stimulation of cellular proliferation. The late proteins, L1 and L2 form the minor and major capsid proteins [25].

HPV infects the squamous epithelial cells, which have the ability to proliferate and gain access to basal cells during abrasion or trauma. HPV then induces the viral genes’ expression, which is critical for viral replication in the basal cells. The HPV interaction with the host cells occurs via heparin sulfate proteoglycans and host cell surface receptors such as α-6 integrins. The E2 protein acts as a transcriptional repressor of E6 and E7. HPV replicates by the rolling circle mechanism, during which it may integrate into the human genome. This integration perturbs the expression of E2, thereby favouring the upregulation of the expression of the E6 and E7 oncoproteins, leading ultimately to cell transformation. Following viral replication, L1 and L2 proteins form the virus capsid and the subsequent mature virus production. The mature virus is then released with the help of the E4 protein and desquamation of cells [5][6][7].

Cancers caused by HPV arise in tissues and organs where HPV infects epithelial cells. These tissues contain squamous cells that line the inside of these organs and are present within these tissues. It is these cells that are the target of HPV infection. The sites of HPV infection include the oropharynx, anus, penis, vagina, vulva and most importantly for this review, the cervix ( Figure 3 ). With some geographical variation, HPV infection causes 70% of cancers of the vulva, 75% of all vaginal cancers, 60% of all penile cancers, 90% of all anal cancers and 70% of all oropharyngeal cancers. In terms of cervical cancer, it is thought that nearly all cervical cancers are caused by persistent HPV infection [3][26]. 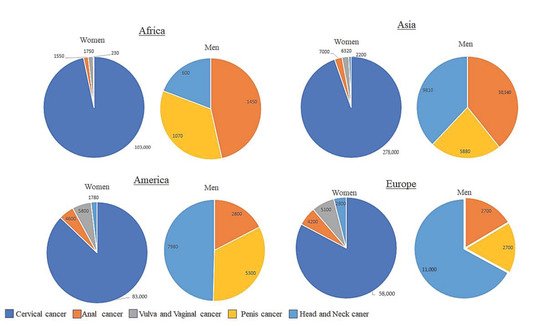 More
© Text is available under the terms and conditions of the Creative Commons Attribution (CC BY) license (http://creativecommons.org/licenses/by/4.0/)
Upload a video for this entry
Information
Subjects: Oncology
Contributor MDPI registered users' name will be linked to their SciProfiles pages. To register with us, please refer to https://encyclopedia.pub/register :
Rahaba Marima
View Times: 35
Revisions: 2 times (View History)
Update Time: 08 Oct 2021
Table of Contents
1000/1000
Hot Most Recent