Submitted Successfully!
Thank you for your contribution! You can also upload a video entry related to this topic through the link below:
https://encyclopedia.pub/user/video_add?id=14726
Check Note
2000/2000
Atopic Dermatitis—Beyond the Skin
Edit

Atopic dermatitis is a chronic inflammatory disease that can arise during the first months of life or at maturity and have a significant negative impact on the quality of life. The main pathogenic mechanism is the breakdown of cutaneous barrier integrity, which is associated with systemic inflammatory immunologic disorders. Atopic dermatitis involves numerous immunologic, allergic, respiratory, and ophthalmologic comorbidities that develop through similar intricate pathogenic phenomena.

Atopic dermatitis is a common chronic inflammatory disease that mostly afflicts the skin [1]. All aspects of it, from its epidemiology and clinical presentation up to therapeutic management and evolution, fall under the category of heterogeneity [2][3]. In this context, the following question arises: is atopic dermatitis a disease or a term for many diseases having a common phenotype?

To regard atopic dermatitis as a systemic inflammatory disease is still controversial [4], and in this work, we synthetize data from the literature on atopic dermatitis and extra-cutaneous-associated disorders as well as recently discovered pathogenic mechanisms to give a broader picture of atopic dermatitis. As a result, we hope to improve therapeutic methods, discover other innovative therapies, and increase of the life quality of the patients with atopy. The present work is based on searches of international data bases using key words such as “atopy”, “dermatitis”, “inflammation”, “allergy”, and “comorbidities”. The search was limited to human studies written in English.

Atopic dermatitis usually begins within the first 6 months (45% of cases) or during childhood, and up to age 5 (70%) [5]. Outbreaks alternate with periods of greater or lesser remission, and the persistence of specific symptoms until maturity gives atopic dermatitis its chronic nature. Up to 50% of the children diagnosed with it show signs of disease in adulthood. Currently, approximately 20% of children and 10% of adults worldwide suffer from atopic dermatitis, and incidences are increasing in industrialized countries [6][7].

The negative psychosocial and financial impacts are comparable to those associated with epilepsy or diabetes. Beyond the specific symptoms of the disease, insomnia caused by pruritus and a decrease in attention and concentration also contribute to increased absenteeism from work, which leads to economic loss [8][9].

At the cutaneous level, atopic dermatitis develops through imperfectly delimited erythema accompanied by pruritus, and vesicles in acute stages evolve to chronicity and liquefaction. Xerotic skin is recurrent and often occupies vast areas ( Figure 1 ). The association between xerosis and pruritus leads to the appearance of post-scratch abrasions, which increases susceptibility to infection. Atopic dermatitis can affect any area of the skin, and lesions are distributed symmetrically, especially in flexible regions. The morphology and the location mostly depend on the age of onset, for example: for babies it occurs mainly on the face, neck, scalp, elbows, or knees ( Figure 1 ) [10][11][12]. 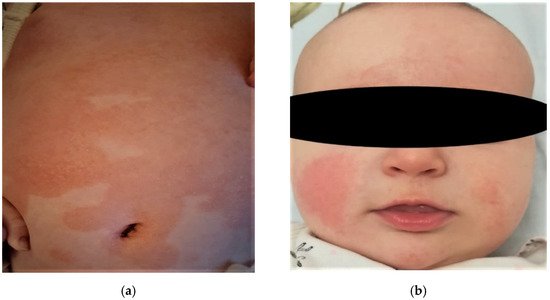 Although studies referring to the association between atopic dermatitis and ophthalmic diseases are relatively limited, some scientific evidence attests to modifications in the ocular surface in atopic patients. Of these, the most common are the blepharitis, conjunctivitis, uveitis, keratoconus, and rarely, detached retinas. Approximately 25–50% of patients with atopic dermatitis develop ocular complications over time [19].

Understanding the contribution of IgE autoantibodies in the pathophysiology of atopic dermatitis, knowing the targets, and studying the correlation between auto-IgE and the severity of the disease will lead to the prompt diagnosis and individualized management of atopic dermatitis and possible autoimmune comorbidities [20][21].

Many cutaneous or systemic pathologies based on immune mechanisms (lichen planus, lupus erythematosus, inflammatory bowel disease, psoriasis vulgaris, bullous dermatosis, atopy) have clinical manifestations in the oral mucosa. Often, their onset is in the oral cavity [22].

The correlation between oral lesions and atopy is not new, but the pathogenic mechanisms underlying this association have not been fully elucidated, and studies addressing this topic are few. In addition to skin, respiratory, or digestive impairment, atopic patients may experience changes in the oral mucosa. For those who have personal or family medical history of atopy, studies have reported an increased susceptibility to allergies, elevated serum IgE levels, and the development of benign migratory glossitis (geographical tongue). It seems that chronic inflammation is the common process that underlies this association. Benign migratory glossitis is a recurrent disease characterized by alternating episodes of exacerbation and remission. It is clinically characterized by linear hyperkeratosis delimiting an erythematous region with hypotrophic filiform papillae, mainly on the dorsal face and edges of the tongue. It is usually asymptomatic, but some patients report pain or burning sensation, especially after ingesting acidic or spicy food [23].

Although increased frequency of atopy (dermatitis, asthma, rhinitis) in patients with geographic tongue has been described by Marks et al. , benign migratory glossitis is not a specific sign of atopy and can be found it in other conditions such as psoriasis, vitamin deficiency, and liver disease [24].

Other oral manifestations of atopy are the absence, or the low number of, Fordyce granules, which are normally present on the labial and jugal mucosa in healthy subjects, irritative stomatitis, recurrent aphthous stomatitis, fungiform papillary hypertrophy, and oral candidiasis [25]. None of these pathological conditions is specific to atopy, but the correlation with atopic status has been proven by decades of studies.