Submitted Successfully!
Thank you for your contribution! You can also upload a video entry related to this topic through the link below:
https://encyclopedia.pub/user/video_add?id=14524
Check Note
2000/2000
Adipose Tissue Immunometabolism
Edit
Upload a video
This entry is adapted from 10.3390/cells10092288

Adipose tissue is unique in terms of its immune effects on apoptotic cell clearance, as adipocyte apoptosis triggers inflammatory cytokine responses in macrophages, and is a potential inducer of adipose tissue inflammation. Classically, there are two types of adipose tissue in mammals: white adipose tissue (WAT) and brown adipose tissue (BAT). Adipocytes of the WAT accumulate neutral lipids in a large droplet, whereas BAT adipocytes have multilocular lipid droplets and high lipolytic activity, and oxidize fatty acids into ATP, and generate heat.

1. Introduction: The Impact of Apoptotic Cell Clearance in Fat Depots

Apoptosis is an inevitable process in tissue development, and is a key component of the necessary physiological tissue turnover for proper tissue healing (reviewed in [1]). During this process, however, apoptotic cells pollute their surroundings with damage-associated molecular patterns, potential autoantigens, modified lipids and aged molecules, which can all impair tissue integrity and initiate immune responses. The safe removal of apoptotic debris is, hence, crucial to prevent self-immunity or the development of tissue damaging inflammation. This important task is performed by tissue-resident macrophages, which clear tissues of hazardous materials from the dead or dying cells without evoking inflammation [2]. The “immunologically silent” removal of apoptotic cell contents is particularly relevant when apoptotic cells are cleared from damaged, infected or inflamed tissues. Macrophages exposed to the content of apoptotic cells adopt a pro-resolving, anti-inflammatory or tolerogenic phenotype, which is often termed alternative- or M2-macrophage activation (reviewed in [3][4]). Apoptotic cell clearance induces interleukin-10 (IL-10) and tumor growth factor beta (TGFβ) production in macrophages concomitant with the expression of various M2-activation-associated molecules such as the high affinity scavenger receptor for the hemoglobin-haptoglobin complex CD163 and the mannose receptor CD206 [5].

Adipose tissue is unique in terms of its immune effects on apoptotic cell clearance, as adipocyte apoptosis triggers inflammatory cytokine responses in macrophages, and is a potential inducer of adipose tissue inflammation [6]. Classically, there are two types of adipose tissue in mammals: white adipose tissue (WAT) and brown adipose tissue (BAT) [7][8]. Adipocytes of the WAT accumulate neutral lipids in a large droplet [9], whereas BAT adipocytes have multilocular lipid droplets and high lipolytic activity, and oxidize fatty acids into ATP, and generate heat [10][11]. Beyond their role in fat metabolism, WAT and BAT have their own, specific, endocrine and immune functions [9]. Excess development of WAT leads to obesity, which is associated with a decline in BAT mass.

Number of adipocytes, which build up the adipose tissues, is stable over a prolonged period of time, and the mature adipocytes are relatively resistant to apoptosis [12][13][14]. Albeit adipocyte apoptosis appears during development and remodeling of the adipose tissue, and the adipokine C1q /TNF-related protein 9 (CTRP9) increases the uptake of apoptotic cells by macrophages [15], adipocyte number in the WAT depots is relatively constant during infancy and childhood [16]. The lipid content of the WAT increases along postnatal development due to the expansion of the cell volume of adipocytes [17], and a notable increase of adipocyte number appears at the onset of puberty [16]. In infancy, adipocytes undergo differentiation ( Figure 1 a) and activate lipolysis in response to insulin and β-adrenergic stimulation [18][19]. Two adipocyte populations can be identified later, in puberty and in adulthood: small, still maturing cells, and larger, lipid-laden mature adipocytes ( Figure 1 a) [17][20]. The number of mature adipocytes increases in severe obesity, and newly generated adipocytes also appear. An increase in adipocyte number is termed adipocyte hyperplasia, whereas an increment in cell volume due to lipid accumulation is termed adipocyte hypertrophy [13] ( Figure 1 a).

Figure 1. Adipocyte apoptosis and its metabolic impact. (a) In postnatal life, WAT undergoes differentiation and expansion. Differentiating adipocytes (cell population ①) are abundant after birth. In infancy, the prevalence of mature adipocytes (cell population ②) increases and, in adulthood, the lipid-storing mature adipocytes build-up the WAT. The number of differentiating and hypertrophic adipocytes (cell population ③) increases dramatically in obesity. Adipocyte hypertrophy is associated with apoptosis and secondary necrosis. Graphs modified from [19][21]. (b) Transcript level of survival factors Bcl2 (BCL2 apoptosis regulator) and Birc2 (baculoviral IAP repeat-containing 2) in infant and adult WAT and in adult BAT in the mouse. Note the high expression of the survival factors in adult WAT. In turn, the apoptosis markers Casp14 (caspase 14) and Perp (TP53 apoptosis effector) are highly expressed in infant WAT, likely due to differentiation or remodeling of the WAT. Secondary analysis of next-generation sequencing experiments from the study [22]. (c) Immunohistochemical labeling of the macrophage marker F4/80 antigen in obese WAT in the mouse. Sample from the study [21]. CLS—crown like structure, Adipo—adipocyte, scale 50 μm. (d) Transmission electron microscopy of a mouse adipose tissue macrophage (ATM). Note the ingested lipid droplets (lp) that have been released by adipocytes. nc—nucleus, scale 2.5 μm. (e) Scheme summarizing the potential effect of ATMs on systemic metabolism. In response to apoptotic cells (AC), ATMs release mediators that impact the metabolism of adipocytes and other metabolic organs such as the liver. The resulting metabolic changes affect the central control of energy balance, by targeting endocrine organs and the central nervous system (CNS).

How macrophages respond to apoptotic adipocytes may depend on the immunological context in which adipocyte death occurs, the signals provided by the apoptotic cells [26], and additional immune signals such as complement and cytokines [27]. Under homeostatic conditions, when apoptotic adipocytes are scarce and Th2 cytokines are expressed in the WAT, the patrolling ATMs clear the dying adipocytes and adopt an M2-like activation state [28]. It is plausible that the first wave of apoptosis of adipocytes during the development of obesity is well controlled by the ATMs, and they are able to maintain an M2-like activation state [29]. However, the prevalence of damage-associated molecules and pro-inflammatory lipid species in the dying adipocytes can switch the function of ATMs towards the release of inflammatory cytokines and reactive oxygen species. Moreover, the capacity of ATMs to clear apoptotic cells may be exhausted in obesity [30], and the apoptotic or necrotic cell debris aggravates inflammation. 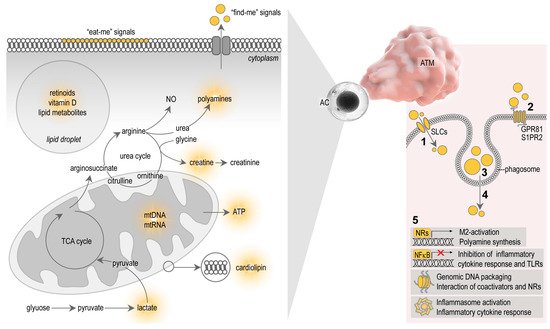 3. Metabolites of Apoptotic Cells and Their Effect on Macrophages

Microparticles released by apoptotic cells, and the apoptotic debris itself, contain membrane lipids and lipid mediators, which are metabolized in the macrophage phagosome to provide ligands for nuclear receptors (NRs) and trigger M2-activation (reviewed in [3][31], Figure 2 ). NRs are transcription factors that regulate gene transcription in a ligand-dependent manner [33]. Macrophages express several NRs, including peroxisome proliferator activator receptors (PPARs), liver X receptor (LXR), retinoid X receptor (RXR), retinoic acid receptor (RAR) and vitamin D receptor (VDR), and are all implicated in phagocytosis, a crucial mechanism for apoptotic cell clearance [34][35][36][37][38]. Apoptotic cells fail to inhibit pro-inflammatory cytokine responses in macrophages lacking PPARs or RXRs [37][38][39]. Furthermore, the absence of the PPARβ/δ ligand-binding domain is sufficient to impair M2-activation stimulated by apoptotic cells [37]. This suggests that PPAR/RXR signaling may be activated by lipid metabolites derived from cell membranes of the internalized apoptotic cells. However, the uptake of apoptotic cell membranes may also induce inflammasome activation in macrophages. Mitochondrial membranes, as well as entire mitochondria of the apoptotic cells, are released by apoptotic cells and trigger inflammasome activation due to the presence of damage-associated molecules in the apoptotic mitochondrial membrane, such as cardiolipin [40][41] ( Figure 2 ).

Apoptotic cells release metabolites that initiate cellular responses in neighboring cells and in macrophages that clear apoptotic debris. These signals are often called as “find-me” signals, since they promote the encounter between macrophages and apoptotic cells [26] and are released actively by dying cells through pannexin channels and possibly through other membrane channels [49].

Polyamines self-assemble with phosphate ions in the cell nucleus and generate so-called nuclear aggregates of polyamines, which interact with genomic DNA and control DNA conformation, protection and packaging [50]. Polyamines also affect the interactions of NRs with their coactivator complexes [51]. Given that NRs are important in both adipose tissue development and macrophage functions, especially in apoptotic cell removal (reviewed in [3]), it is plausible that polyamines shape macrophage functions in the process of efferocytosis at a transcriptional level ( Figure 2 ).

Beyond its traditional role as a lipid storage site, adipose tissue is increasingly recognized as being pivotal in metabolic and endocrine physiology [9]. ATMs are positioned at the interface between these functions, and interactions between ATMs and adipocytes potentially affect systemic metabolism and endocrine health ( Figure 3 a). Uptake of apoptotic cells is a core function of macrophages and serves as a communication channel between adipocytes and ATMs. The rich immunometabolism of apoptotic cell contents shapes ATM function, which in turn sustains healthy metabolism by balancing the protective and destructive immune functions of ATMs. Protective immunity ensures the neutralization of apoptotic cells and favors cell metabolism and energy expenditure ( Figure 3 a). When ATMs process materials of the dying adipocytes correctly, they signal to the endocrine organs and other immune cells, which ultimately supports adipose tissue development and metabolism ( Figure 3 a). By contrast, destructive immune traits appear in response to danger signals from dying adipocytes ( Figure 3 b). The resulting ATM phenotype damages metabolism through uncontrolled inflammation or self-immunity [52], leading to a dysfunctional interplay between ATMs and adipocytes and driving the development of metabolic diseases [52][53]. ( Figure 3 b). As adipocyte death is prevalent in obese adipose tissue, the majority of the literature has focused on the role of ATMs in the setting of obesity. However, the immune functioning of ATMs begins at birth, and is crucial to sustain energy expenditure in infancy [22][54][52][55]. Adipocyte apoptosis may occur in the adipose tissue of the neonate, but we know very little about the impact of ATM-adipocyte interactions in early postnatal development, even though adipose tissue quality in infancy is contingent on ATM function and determines metabolic health in adulthood [22][56]. It is thus important to comprehend how physiological adipocyte death (i.e., during adipose tissue development) shapes ATM functions in postnatal life.

Figure 3. The two faces of apoptotic cell metabolites. (a) Chain of signaling events triggered by the apoptotic cell (AC). Metabolites and contents of the ACs are processed by ATMs. As a response, ATMs release cytokines, reactive oxygen species (ROS) and various lipid mediators, which signal to other immune cells, the central nervous system and the endocrine organs. In turn, these cells and organs release hormones, neurotransmitters and cytokines that shape ATM functions and, ultimately, determine the metabolic performance of the adipocytes. (b) Metabolites and contents of the dying adipocytes may be safely recycled by macrophages in an immunologically silent process, which results in gain of M2-macrophage traits and supports tissue turnover and metabolic health. Some contents of the apoptotic cells—especially of the dying adipocytes—deliver danger signals to the macrophages, and trigger inflammation and inflammatory cell death. Eventually the tissue integrity is impaired and immune-metabolic disease develops, such as meta-inflammation in the obese adipose tissue.

Several signals that potentially define whether ATMs safely recycle adipocyte contents or trigger inflammation are known and have been reviewed here ( Figure 3 b). In the coming decades the treatment of obesity and associated chronic diseases will likely remain a major challenge to health systems worldwide; thus, it is timely and important to understand the impact of innate immune signaling—including apoptotic adipocyte-derived signals—in the adipose tissue.

More
© Text is available under the terms and conditions of the Creative Commons Attribution (CC BY) license; additional terms may apply. By using this site, you agree to the Terms and Conditions and Privacy Policy.
Upload a video for this entry
Information
Subjects: Cell & Tissue Engineering
Contributor MDPI registered users' name will be linked to their SciProfiles pages. To register with us, please refer to https://encyclopedia.pub/register :
Tamás Röszer
View Times: 159
Revisions: 2 times (View History)
Update Time: 24 Sep 2021
Table of Contents
1000/1000
Hot Most Recent