Submitted Successfully!
Thank you for your contribution! You can also upload a video entry related to this topic through the link below:
https://encyclopedia.pub/user/video_add?id=14481
Check Note
2000/2000
Conductive Polymers in Infarction Repair
Edit
Upload a video
This entry is adapted from 10.3390/ijms22168550

The function of the heart pump may be impaired by events such as myocardial infarction, the consequence of coronary artery thrombosis due to blood clots or plaques. A whole heart transplant remains the gold standard so far and the current pharmacological approaches tend to stop further myocardium deterioration, but this is not a long-term solution. Electrically conductive, scaffold-based cardiac tissue engineering provides a promising solution to repair the injured myocardium. The non-conductive component of the scaffold provides a biocompatible microenvironment to the cultured cells while the conductive component improves intercellular coupling as well as electrical signal propagation through the scar tissue when implanted at the infarcted site. The in vivo electrical coupling of the cells leads to a better regeneration of the infarcted myocardium, reducing arrhythmias, QRS/QT intervals, and scar size and promoting cardiac cell maturation.

Myocardial infarction (MI) is one of the clusters of numerous other cardiovascular diseases and occurs due to the blockage of the coronary artery delivering blood (ischemia) to the ventricle with consequent oxygen shortage to the contractile cells (cardiomyocytes) [1]. The final result is that, after MI, billions of cardiomyocytes (CMs) with limited proliferation capacity are lost and substituted by heterogeneous collagen-rich fibrotic scar tissue [2][3]. Among others, the fibrotic scar does not display contractile capabilities and does not appropriately conduct electric currents, thus generating myocardial arrhythmias and asynchronous beating, contributing to determine heart failure in the worst-case scenario [2]. The current pharmacological approaches are palliative [4] and finalized to prevent intra-coronary blood clotting (thrombolytics, antiplatelet agents, such as aspirin, etc.) and post-ischemic ventricular dilation (ACE-inhibitors, β-blockers, etc.), but do not induce regeneration of the injured cardiac tissue. So far, the heart transplant is the gold standard in post-MI end-stage heart failure, but the lack of organ donors and the possibility of immune rejection makes this approach elusive [5].

In recent years, the parallel progresses in cell biology, materials science, and advanced nano-manufacturing procedures have allowed us to envision the possibility to set up novel strategies (collectively dubbed “tissue engineering”) to combine cells and biomaterials to fabricate myocardium-like structures in vitro to be engrafted into the heart to repair the damaged parts. This approach is characterized by an extreme level of complexity and, as a matter of fact, after more than two decades of extensive efforts, many issues remain to be answered before tissue engineering products can be used at the bedside.

Natural or synthetic biomaterials, such as cardiac patches [6], injectable hydrogels [7], nanofiber composites [8], nanoparticles [9], and 3D hydrogel constructs [10], have been scrutinized to produce structures that mimic the mechanical properties of the extracellular matrix of the myocardium and potentially restoring the cardiac functions [11][12]. However, the issues related to arrhythmias and asynchronous beating of the injured myocardium are not resolved due to the non-conductive nature of most of the polymers used so far. The solution to this issue has been envisioned in conveying electric signals through scaffolds with embedded polymers displaying electroconductive characteristics comparable to the biological tissues (Figure 1) and this has already been demonstrated to enhance cell differentiation to mature CMs [13].

Electrically inert biomaterials can be blended with conductive polymers, such as polyaniline (PANI), polypyrrole (PPy), and Poly(3,4-ethylenedioxythiphene)/PEDOT, which belong to the family of intrinsically conductive organic materials [14]. The resulting electroconductive scaffold would harness the biocompatibility and the mechanical properties of the inert biomaterial and the electrical nature of the conductive component to drive the differentiation of the cultured stem/progenitor cells to cardiomyocyte-like cells with synchronous beating patterns, and enhance the expression of cardiac-specific genes.

GATA4 and Nkx2.5 are cardiac-specific transcription factors that play a fundamental role in myocardial differentiation and cardiac hypertrophy in the early stages of cardiogenesis in a developing embryo, while cardiac troponins are expressed in the cardiac muscles of the mammalian and avian species [15][16][17]. Connexin 43 is the principal gap junction protein of the heart which mediates action potential propagation between cells to synchronise cardiac contraction. In addition to this canonical role, it may act as a transcription regulator [18]. This cell-laden conductive scaffold improves the electrical signal propagation through the scar tissue, when implanted in vivo, and results in repair/regeneration of the injured myocardium with elevated ventricular wall thickness, improved blood pumping ability, reduced scar size, shorter QRS/QT intervals, and lower risk of arrhythmias, as shown in Figure 2 [19]. 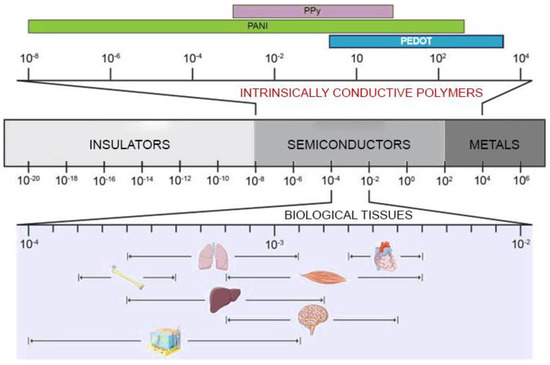 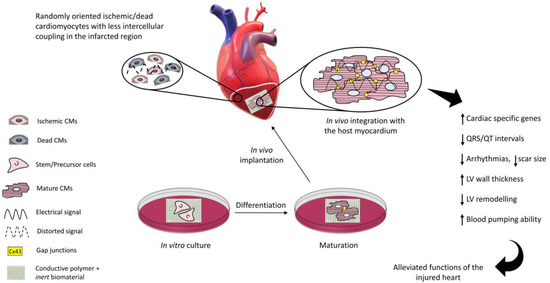 Figure 2. Conductive scaffold-based cardiac tissue engineering. After MI, damaged and dead cardiomyocytes (CMs) compromise the electrical conduction of the myocardium. The in vitro cell-laden construct can be transplanted at the infarction site to restore the electrical functions and to repair the damaged myocardium.

3. The Underlying Mechanisms of the Positive Role of Conductive Substrates in Cardiac Tissue Engineering

Though the electroconductive scaffolds provide better platforms for the tissue engineering of nerve, cardiac, and skeletal muscle tissues, the mechanism by which these constructs influence cellular behaviour is yet to be known [75]. To uncover this, an equivalent circuit model was proposed for two groups of cardiomyocytes seeded on a conductive substrate. One group was assumed to be active (AG), which could fire spontaneous action potentials, while the other was assumed to be passive (PG), which could not fire spontaneous action potentials, but it was well electrically coupled. AG was considered the only source of ionic current, and the passive group was only affected by the electrical currents from the neighbouring AG. Nano gaps/clefts are formed between the cell membrane of the cultured cardiomyocytes and the substrate surface. Ionic solution filled these clefts during culturing, and it was modelled as seal resistance [76]. Seal resistance is usually generated by the solution between cell-substrate interfacial gaps and has a direct link with the adhesion strength of cells with the substrate [77]. When cells in the active group (AG) fire spontaneous action potentials, the electronic redistribution on the surface of the conductive substrate takes place just beneath the cells. The interfacial clefts between PG cells and substrate fill with more anions due to this electronic redistribution, which depolarises the plasma membrane of cells and could trigger an action potential. Larger seal resistance gives rise to higher excitation potential (Upeak) which indicates a strong electrical coupling between AG and PG. The passive group will fire an action potential once the threshold (Upeak) crosses the resting membrane potential of −90 mV [78][79]. In this way, PG could be stimulated and electrically synchronised to AG under the influence of action potentials generated by the active group, as shown in Figure 3.

Figure 3. A theoretical model of ionic to electronic current transition for cells cultured on a conductive substrate. The ionic current interacting with electrons could direct their flow in other directions. This electronic current, opening the voltage-gated ion channels, would result in the influx of Na+, K+ and Ca2+ ions. This influx will depolarise the plasma membrane and the passive group (PG) will eventually fire action potentials.

Electroconductive scaffolds represent a leap forward in the effort to manufacture supports to properly address cell fate towards a cardiomyocytic phenotype. The scaffold fabrication is a complex endeavour finalised to replicate in vitro the ECM microenvironment to foster proper cell-cell and cell-matrix interactions driving the cardiomyocyte maturation process. An optimal scaffold must be biocompatible (but not necessarily biodegradable, if the constituent materials are immunopermissive), with (i) adequate porosity (to deliver biologically active factors and remove cell waste) and (ii) mechano-structural design (to deliver physical signals, such as stiffness, micro/nano-topography, etc.), and (iii) with electroconductivity appropriate to mimic the ECM structure and function. Finally, these characteristics must allow the integration of the engineered tissue with the native injured myocardium to restore heart function.

A biodegradable, intrinsically conductive polymer whose conductivity could be tuned to mimic the electrical features of the myocardium is of great necessity in cardiac tissue engineering. No material has ever been produced which would undergo perpetual contraction and relaxation cycles for an entire span of natural life, like myocardium. To mimic this versatility, future studies should take into consideration the complex biomechanics, anisotropy, micro/nano-architecture, and electrical properties of the myocardium.