Submitted Successfully!
Thank you for your contribution! You can also upload a video entry related to this topic through the link below:
https://encyclopedia.pub/user/video_add?id=14427
Check Note
2000/2000
Bimetallic Nanocrystals
Edit
This entry is adapted from 10.3390/nano11081926

Bimetallic nanocrystals are nanoscale crystals composed of two different metal elements. Bimetallic nanocrystals are expected to exhibit improved physical and chemical properties due to the synergistic effect between the two metals, not just a combination of two monometallic properties, which have important applications in the field of catalysis, energy conversion, gas sensing and bio-detection applications.

Despite only two elements, the architecture of bimetallic nanocrystals are complicated and multiform. According to the atomic ordering and configuration of two different metals, bimetallic nanostructures can be classified into three main types: alloyed structures (intermetallic and solid solution) and core-shell and heterostructure, as displayed in Figure 1.

The co-reduction method entails that the precursors of two metal ions can be reduced simultaneously under certain reaction conditions, and then nucleate and grow into nanocrystals. The method is considered to be the most simple and straightforward strategy to prepare the bimetal with alloyed or intermetallic nanostructures (Figure 2)[1]. However, core-shell and heterostructure also can be obtained by this method under certain condition.

Seed-mediated growth is an effective synthesis strategy to generate the bimetallic nanocrystals with well-defined structures that are difficult to obtain by other methods[2][3]. The conceptual diagram of these two structures obtained by the seed growth method is shown in Figure 3. In this process, one metal is firstly synthesized as a seed, and then the other metals are uniformly deposited on the seeds surface and form a shell layer, resulting in a bimetallic nanocrystal with a core-shell structure; And if the second metal is only deposited and grown in the special sites of seed crystals, the bimetallic nanocrystal with a heterogeneous structure will be obtained.

As a good way to produce bimetals with special structure, the galvanic replacement reaction is an electrochemical process, in which one metal is replaced by another metal ion due to their different reduction potential in the reaction system. In essence, the reaction is also an oxidation-reduction process. Metal (C) with high potential can be easily oxidized. Metal ions (D+x) with low reduction potential are difficult to reduce by chemical reduction method, but can be reduced by metal C. Therefore, the method is usually suitable for preparing the inactive metal nanocrystals using active metal as template.[4][5] 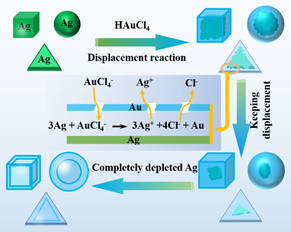 Thanks to the nanoengineering technique, the morphology and microstructure of the nanoparticles can be precisely controlled. In addition to the four methods we mentioned above, there are some other synthetic protocols to prepare bimetals with well-defined shapes, such as hard or soft template methods, combustion synthesis, hydrothermal treatment, the combination of the two approaches and so on. These methods have their own advantages and disadvantages in preparing bimetallic nanocrystals with different special structures.

Bimetallic nanocrystals have been widely used in many important fields from science to technology. In comparison to single metal nanocrystals, bimetallic nanocrystals possess many unique properties due to the adjustable composition, controllable morphology and variable electronic structure, so they also have many practical and potential applications including catalysis, sensing, biodetection, biomedicine, and so on.

Bimetallic nanocatalysts have been widely used in solution electrocatalytic reactions, such as methanol electrooxidation, hydrogen electrooxidation, and oxygen reduction reaction and so on. At the same time, they are often used to catalyze heterogeneous reactions, such as CO oxidation, NOx reduction, and petroleum reforming and so on. The applications of bimetallic nanocrystals in heterogeneous catalytic reactions such as anode and cathode of fuel cells are briefly introduced.

The research on conversion of CO2 to other high value-added carbon containing small molecular compounds, such as hydrogenation to alkanes, olefins and other fuels, or to medium acid, ethanol and other chemical products, has not been extended to large-scale applications. The application of this process mainly depends on the development of high catalytic performance and low-cost catalysts.The preparation of CO, HCOOH, CH3OH, CH4, C2H6 and other organic hydrocarbon small molecular compounds by the electrochemical catalysis of CO2 have attracted the attention of researchers as a promising method for large-scale energy storage (power storage) of solar energy and wind energy due to its relatively mild conditions, strong controllability and high yield per unit area (compared with a direct photocatalytic method).

Compared with the alloy materials with noble metal components, the bimetallic materials formed by two kinds of non-noble metal can also obtain high catalytic activity and selectivity if the size, shapes and compositions could be reasonably designed.[6][7]

A sensor is a detection device, which can selectively recognize the target information and transform the information into electrical signal or other measurable signal according to certain rules. Under normal conditions, bimetallic NPs can be designed and obtained to express their unique properties of each metal. the modification and doping of bimetallic nanocrystals especially noble metals (Pd, Pt, Au, Rh, and Ag) have been proved to be among the most effective ways to reduce the operating temperature of sensors, enhance the response of target gases and improve the selectivity of sensors.[8][9]

More
© Text is available under the terms and conditions of the Creative Commons Attribution (CC BY) license (http://creativecommons.org/licenses/by/4.0/)
Upload a video for this entry
Information
Subjects: Nanoscience & Nanotechnology
Contributor MDPI registered users' name will be linked to their SciProfiles pages. To register with us, please refer to https://encyclopedia.pub/register :
Gaojie Li
View Times: 78
Revision: 1 times (View History)
Update Time: 23 Sep 2021
Table of Contents
1000/1000
Hot Most Recent