Submitted Successfully!
Thank you for your contribution! You can also upload a video entry related to this topic through the link below:
https://encyclopedia.pub/user/video_add?id=14361
Check Note
2000/2000
Iron Oxide Nanoparticles in Medicine
Edit
Upload a video
This entry is adapted from 10.3390/nano11092337

This entry focuses on the latest developments in regenerative medicine, in which iron oxide nanoparticles (IONPs) play a crucial role for tissue engineering and cell therapy. IONPs are not only enabling the use of non-invasive observation methods to monitor the therapy, but can also accelerate and enhance regeneration, either thanks to their inherent magnetic properties or by functionalization with bioactive or therapeutic compounds, such as drugs, enzymes and growth factors. In addition, the presence of magnetic fields can direct IONP-labeled cells specifically to the site of action or induce cell differentiation into a specific cell type through mechanotransduction.

The number of publications related to the field of regenerative medicine have increased dramatically over the last 20 years. Nanotechnology is also finding its way into biomedical research and could significantly improve and accelerate tissue regeneration due to its versatility and functionalization possibilities. The materials used are composed of a wide variety of components and exhibit a broad range of shapes, from fibrous structures or nanopatterned surfaces to particulate objects. Particulate materials, such as NPs, are specifically utilized for diagnostic purposes, as they enable multimodal and multifunctional molecular imaging [1][2]. Moreover, they can easily be modified to serve as vehicles for the transport of drugs or genes and they are also increasingly used in cell therapy and tissue engineering approaches [3][4][5]. Especially in stem cell therapy, they can be applied to trigger a desired cell differentiation by positively influencing regeneration per se, coupled with bioactive substances and/or in the presence of magnetic fields. Similarly, they can be used in tissue engineering approaches as part of a biocompatible scaffold in combination with cells and/or bioactive substances to support the regeneration or replacement of damaged cells or tissue. Despite the stringent requirements for biocompatibility, scaffolds made of different materials with a wide variety of surface properties and structures have been developed to create conditions for cell adhesion and proliferation that are optimized for the particular applications.

One of the most promising nanoscale materials are iron oxide nanoparticles (IONPs), which can be functionalized with other bioactive substances, embedded in composites, and bound or taken up by cells [6]. IONPs are frequently used for drug delivery applications, where a directed drug delivery is enabled either by the use of specific binding proteins, such as antibodies, or by the influence of external magnetic fields [7][8]. Furthermore, primary cells and cell lines can be magnetically labeled with IONPs, allowing non-invasive in vivo monitoring of the efficacy of a cell therapy or tissue engineering approaches using magnetic resonance imaging (MRI) if the particle loading is sufficient [9][10]. In this context, it is worth noting that cells with high phagocytic activity, e.g., macrophages, enable the uptake of high amounts of NPs without the need for transfection agents, whereas other cells, such as T cells or stem cells, may require transfection agents, peptide-based delivery systems or magnetotransfection to achieve an adequate IONP loading [11][12][13]. In any case, IONPs can provide information about the correct positioning and function of cells and materials over time and allow monitoring of the degradation or clearance of scaffold materials. Moreover, IONPs-labelled cells can be magnetically directed to a specific location to enhance the regeneration of a tissue or to restore a function [14]. Since stem cells are also capable of differentiating into a variety of other cells, including myoblasts, adipocytes, chondrocytes, osteoblasts and neuron-like cells, the applications of IONPs-loaded cells in regenerative medicine are immense. Finally, biomaterials and particle-loaded cells can be used to create biocompatible structures that can be implanted as grafts to replace destroyed or diseased tissue. Even without the use of artificial support structures, it is possible to generate three-dimensional tissue such as cell sheets and spheroids using particle-loaded cells [15].

The successful use of NP-based cell therapy and tissue engineering and its monitoring by MRI for regeneration or replacement of diseased or injured tissue has been demonstrated in numerous preclinical in vitro and in vivo studies. This review highlights developments in regenerative medicine and focuses on the use of iron oxide nanoparticles in cell therapy and tissue engineering. Outlined is not only the use of IONPs for cell tracking by MRI, but in particular the active use of these particles to promote cell and tissue regeneration in cardiovascular, osteochondral and neuronal diseases and defects, among others. Excluded are the broad applications of IONPs in tumor treatment or imaging, as these have been described in detail elsewhere.

There are a variety of materials that can be used for TEVG production. These include hydrogels, polymers and nanomaterials, which may not only act as a support structure and provide a compatible surface for cells, but also release substances when required and promote and accelerate tissue formation.

Apart from pure IONP-based treatment of atherosclerotic plaques, cells, especially EPCs, may also be used for therapeutic angiogenesis and vascular repair and, after loading with IONPs, to monitor the cell migration into vessels. For instance, after transplantation of ultra-small IONP-poly-l-lysine-labeled EPCs into an atherosclerotic rabbit model, results suggest that ultra-small IONP-labeled EPCs may play a role in repairing endothelial damage and preventing atherosclerosis [16].

Up to date several stem cells of different origins has been utilized for cardiovascular tissue regeneration. A relatively new therapeutic approach for the treatment of cardiac and other diseases is the usage of human ESCs (hESCs). For in vivo visualization of transplanted hESCs, the cells can be labeled with IONPs and tracked with MRI. In an early study, hESCs cells were loaded with dextran-coated ferumoxides (Feridex IV ® /Endorem ® ) and injected into explanted mouse hearts as well as in vivo into the anterior left ventricular wall of rats [17]. The experiments demonstrated the feasibility of safe MRI-based in vivo tracking of transplanted hESCs cells. Skelton et al. used ferumoxytol-labeled hESC-derived cardiac progenitor cells to evaluate the distribution of cells after transplantation into the left ventricular free wall of uninjured pig hearts [18]. The localization and distribution of labeled cells could be effectively imaged even after 40 days, demonstrating the suitability of ferumoxytol as a long-term, differentiation-neutral cell labeling agent.

Safe and effective loading of stem cells with IONPs to track cardiac regenerative capacity of bone marrow-derived human mononuclear cells and C2C12 skeletal myoblasts using ferumoxides as a label has also been demonstrated after injection of the cells into rat myocardium [19]. Another study showed that DMSA-coated IONPs allowed imaging of skeletal muscle tissue-derived human myoblast cells and that the IONPs did not adversely affect basic cellular functions [20].

In the following chapter, relevant work in the field of stem cell therapy and tissue engineering for cartilage and bone defects in which IONPs were utilized are described ( Figure 1 ). Consideration will be given to work that uses IONPs as drug carriers or as tools for fabricating composite scaffolds, as well as work that exploits the magnetic properties of IONPs for visual inspection and control of cell- and material-based treatments, for magneto-mechanical induction to regulate cell function and differentiation, or for targeted enrichment of NP-loaded cells.

In addition to the possibility of enhancing proliferation, differentiation, and migration of stem cells by mechanical stimulation of an applied external magnetic field, magnetically based enrichment of IONPs or IONP-loaded cells at diseased or defective sites is another promising approach in the field of tissue regeneration [21]. Chiang et al. developed transforming growth factor (TGF)-β1-loaded magnetic gelatin nanocapsules composed of hexanoic anhydride-grafted gelatin and iron oxide nanoparticles to enable combined treatment by magnetically induced stimuli and TGF-β1, as well as to enable magnetic-based enrichment of loaded cells at the site of action [22]. Loading of a chondrogenic ATDC5 cell line with nanocapsules resulted in the magnetically induced upregulation of Col2a1 and, after release of TGF-β1 from degrading nanocapsules, further increased Col2a1 and aggrecan expression and stimulated chondrogenesis. Using an in vitro phantom of a cartilage defect site, Feng et al. demonstrated that SPION-labeled human BM-MSCs can be magnetically directed to the target region to form a three-dimensional (3D) cell sheet structure at the location of the defect [23]. For the treatment of patellar defects, Kobayashi et al. demonstrated that magnetically-labeled MSCs can be enriched after injection into knee joints of rabbit and pig models at the site of the osteochondral defect under the effect of an external magnetic force [24]. The results suggested the potential use of the minimally invasive technique for other cartilage defects caused by osteoarthritis or trauma. In a recent study, autologous BM-MSCs were magnetized with ferucarbotran and injected into the knee joint in patients with a focal articular cartilage defect to which a 1.0 T magnet was pre-attached at an appropriate site [25]. Magnetic targeting demonstrated complete closure of the defects with cartilage-like tissue and significant improvement in the clinical outcomes 48 weeks post treatment.

Reconstruction of bone tissue is an important goal in regenerative medicine. Promising approaches include the controlled differentiation of stem cells and the use of different materials to generate bone scaffolds ( Figure 2 ). The use of IONPs has been demonstrated not only to allow the visualization of the therapeutic process by MRI imaging, but also to promote cell differentiation and, through the application of magnetic fields, to enhance osteogenesis and even to specifically deliver labeled cells or drugs to the target site [26][27][28]. 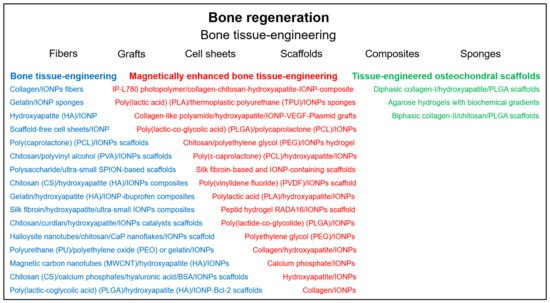 In a recent paper, a multifunctional periodontal hybrid scaffold was developed that mimics the various compositional and microstructural features of alveolar bone, periodontal ligament and cementum [29]. The scaffold exhibited good cytocompatibility and cell viability and could promote osteogenesis through the bioactive superparamagnetic apatite phase and be activated by remote magnetic signals. In another study, human DPSCs were seeded on calcium phosphate cementum scaffolds with incorporated IONPs [30]. Incorporation of IONP into the scaffold increased osteogenic differentiation and bone matrix mineral synthesis of the cells, indicating a potential approach for improved dental as well as craniofacial and orthopedic bone regeneration. Zhang et al. was dedicated to the development of a biomaterial for dental pulp tissue regeneration and repair with the possibility of noninvasive imaging [31]. An ultra-small IONP-labeled hydroxyapatite/silk fibroin scaffold loaded with DPSCs was implanted with a tooth fragment into the subcutaneous space under the nude mice. Expression of dentin acidic matrix phosphoprotein 1 and dentin sialophosphoprotein indicated odontoblast-like cell differentiation, and optical imaging confirmed good revascularization and mineralization. At about the same time, Zare et al. demonstrated that dental pulp stem cells can be loaded with dextran-coated IONPs without significant reduction in viability, proliferation and differentiation properties, demonstrating the suitability of the MRI-based method for monitoring labeled cells [32].

Besides the very advantageous possibility to observe IONP-loaded cells during therapy by imaging methods, cells and their regenerative capacity can also be positively affected by uptake of IONPs—either by magnetically controlled targeting or/and by specific functionalization.

Due to the influence of external magnetic fields and transactivation transduction protein (TAT), which has a remarkable membrane translocation ability, TAT-conjugated PEGlated magnetic polymeric liposomes accumulated significantly around the site of SCI and even within neurons [37].

In another study, Song et al. showed that the combination of magnetic field-mediated gene transfer and TAT-assisted intracellular delivery provides an improvement in transfection efficiency in rat spinal cord after lumbar intrathecal injection and that transgene expression can even be mediated by a magnetic field in a remote region [38]. In contrast to external magnetic fields, Zhang et al. constructed a magnetic targeting system containing a C-shaped permanent magnet and a ferromagnetic needle to generate a magnetic force large enough for growth-promoting magnetic nanomaterials to remain at the target site [39].

More
© Text is available under the terms and conditions of the Creative Commons Attribution (CC BY) license (http://creativecommons.org/licenses/by/4.0/)
Upload a video for this entry
Information
Subjects: Nanoscience & Nanotechnology
Contributor MDPI registered users' name will be linked to their SciProfiles pages. To register with us, please refer to https://encyclopedia.pub/register :
Ralf Friedrich
View Times: 46
Revisions: 2 times (View History)
Update Time: 22 Sep 2021
Table of Contents
1000/1000
Hot Most Recent