Submitted Successfully!
Thank you for your contribution! You can also upload a video entry related to this topic through the link below:
https://encyclopedia.pub/user/video_add?id=14222
Check Note
2000/2000
Treatment of Human Babesiosis
Edit
Upload a video
This entry is adapted from 10.3390/pathogens10091120

Babesiosis is an emerging tick-borne disease caused by apicomplexan parasites of the genus Babesia. With its increasing incidence worldwide and the risk of human-to-human transmission through blood transfusion, babesiosis is becoming a rising public health concern.

Human babesiosis is a rapidly emerging tick-born infectious disease caused by intraerythrocytic parasites of the genus Babesia. Of several hundred Babesia species identified so far, only a few are known to infect humans. These include Babesia microti, Babesia duncani, Babesia divergens and divergens-like species, Babesia crassa-like, and Babesia venatorum [1]. In the United States, most cases of human babesiosis have been attributed to infection with B. microti, but sporadic cases due to infection with B. duncani and B. divergens-like MO1 have also been reported. In Europe, B. divergens used to be the main species responsible for infection in humans. However, recent studies suggest that B. microti and B. venatorum are now more prevalent than B. divergens [2]. In China, human babesiosis is mainly caused by B. microti and B. venatorum, and in the rest of the world, only a few sporadic cases have been reported and were mostly linked to B. microti infection [2].
Babesia spp. are apicomplexan parasites that infect the host red blood cells and are transmitted to mammals by tick vectors (Figure 1). The species of ticks involved in the transmission of Babesia pathogens vary depending on the geographical area and parasite species [1][2]. During the life cycle of Babesia, humans are typically accidental hosts, and most infections are linked to a tick route of transmission [1][2]. However, an increasing number of transfusion-transmitted babesiosis cases have been reported in the US over the past 2–3 decades, making Babesia infections a major public health concern [1][3][4][5][6]. In 2011, human babesiosis became a nationally notifiable disease in the US [5] and as one of the most common transfusion-transmitted pathogens in the US, B. microti was added to the list of significant threats to the blood supply [3][4]. In addition to human-to-human transmission through blood transfusion, several reports have also established the possibility of transplacental transmission from mother to child [1].

Figure 1. Cycle of transmission of the most common Babesia species, B. microti. During a blood meal, an infected tick introduces merozoites into the host (mouse or deer, for example). Free merozoites enter red blood cells and undergo asexual replication. While in the blood, some parasites differentiate into male and female gametocytes (not morphologically recognizable by light microscopy). These gametocytes are then taken up by a tick during a blood meal and differentiate into gametes. While in the gut, gametes fuse to form a zygote, that will subsequently undergo meiotic and several mitotic divisions to form sporozoites that are then transmitted to a mammalian host. Humans are typically accidental hosts and become infected through the bite of an infected tick. Human to human transmission is also possible via blood transfusion.
In most individuals, babesiosis remains asymptomatic or presents with mild flu-like symptoms [1][2]. However, in more susceptible populations, such as the elderly, asplenic, or immunocompromised individuals, the disease can become severe and even life-threatening, with symptoms such as severe anemia, acute respiratory distress, organ failure, and death [1][2].

The current arsenal for the treatment of human babesiosis relies principally on four drugs: atovaquone, azithromycin, clindamycin, and quinine. Atovaquone is used to treat several human diseases, including Pneumocystis jirovecii pneumonia [7], toxoplasmosis [8], and malaria (in combination with proguanil (Malarone) [9]. In apicomplexan parasites, atovaquone targets the cytochrome bc1 complex of the mitochondrial electron transport chain (Figure 2 and Figure 3) [10][11][12][13]. Azithromycin is a relatively broad-spectrum antibiotic indicated for the treatment of numerous bacterial infections, such as those caused by Staphylococcus spp. [14][15][16] and Legionella spp. [17]. The antibiotic is also used for the treatment of toxoplasmosis [12] and, in combination with other drugs, for the treatment of malaria [18]. Azithromycin is a well-characterized protein synthesis inhibitor, which in apicomplexan parasites targets the translation machinery in the apicoplast (Figure 2) [19][20][21]. It is worth noting that azithromycin was found to have a “delayed death” effect, in which parasite division produces viable daughter cells that are subsequently unable to divide in the following cycle [19][21][22]. Clindamycin is another antibiotic commonly used for the treatment of various bacterial infections [23] and repurposed for the treatment of parasitic infections. In combination with quinine, clindamycin is used for the treatment of both malaria and babesiosis [24][25][26]. Several reports have suggested that clindamycin acts in a similar way as azithromycin and targets protein synthesis in the apicoplast (Figure 2) [19][21][22]. Furthermore, selection of clindamycin-resistant T. gondii parasites showed cross-resistance to azithromycin, further suggesting a common target [27]. Quinine is a widely used antimalarial agent, typically administered in combination with an antibiotic such as clindamycin or doxycycline [28]. However, the drug is poorly tolerated and, as such, tends to be replaced by alternative drugs with fewer side-effects [28][29]. In malaria parasites, several modes of action for quinine have been proposed. The most commonly reported mechanism of action involves the disruption of hemozoin formation, resulting in accumulation of free ferriprotoporphyrin IX, a by-product of hemoglobin degradation, which is deleterious to parasite growth [30][31][32]. Confocal imaging using fluorescent derivatives of quinine and its structural analogues, quinidine and chloroquine, have shown accumulation of the probes in the digestive vacuole, consistent with the activity of this compound in this organelle [32][33]. Unlike Plasmodium parasites, Babesia species lack a digestive vacuole, do not degrade hemoglobin, and do not produce hemozoin. Therefore, the mode of action of quinine against Babesia parasites is likely to be different from that in Plasmodium. Interestingly, fluorescent probes were found to bind to phospholipids and to accumulate in membranous structures, including the parasite plasma membrane, the endoplasmic reticulum, and the mitochondrion, suggesting that quinine may inactivate specific biological functions in these organelles [32][33]. Another proposed hypothesis is that quinine acts as a DNA intercalator [34][35][36]. However, the lack of fluorescence in the nucleus reported by Woodland et al. seem to refute interactions with DNA as a potential mode of action [32][33]. More recently, a study in P. falciparum using thermal shift assays suggested that the purine nucleoside phosphorylase (PfPNP) might also be a target of quinine [37]. 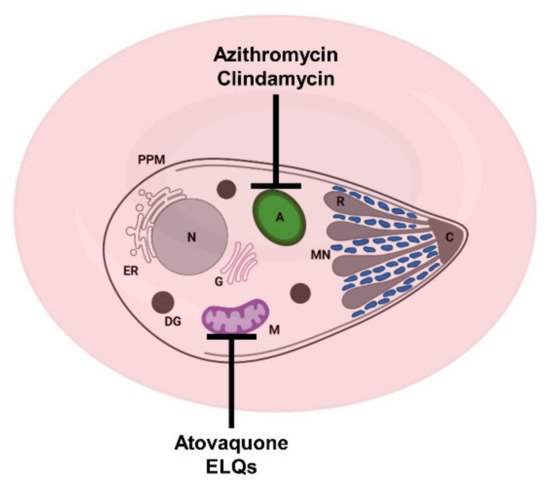 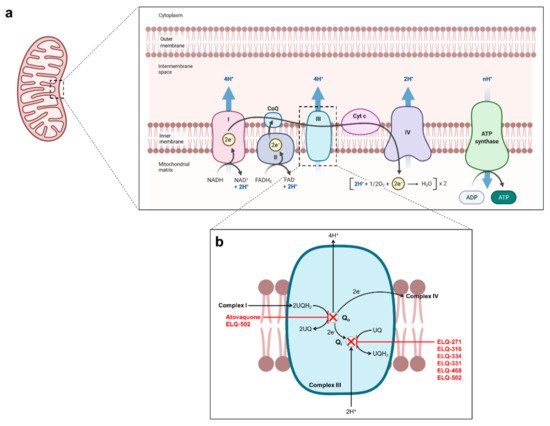 More
© Text is available under the terms and conditions of the Creative Commons Attribution (CC BY) license (http://creativecommons.org/licenses/by/4.0/)
Upload a video for this entry
Information
Subjects: Infectious Diseases
Contributor MDPI registered users' name will be linked to their SciProfiles pages. To register with us, please refer to https://encyclopedia.pub/register :
Choukri Ben Mamoun
View Times: 33
Revisions: 2 times (View History)
Update Time: 16 Sep 2021
Table of Contents
1000/1000
Hot Most Recent