Submitted Successfully!
Thank you for your contribution! You can also upload a video entry related to this topic through the link below:
https://encyclopedia.pub/user/video_add?id=14196
Check Note
2000/2000
Smoothened-Dependent/-Independent Hedgehog Signaling Pathway
Edit
Upload a video
This entry is adapted from 10.3390/biomedicines9091188

The hedgehog (Hh) signaling pathway was first discovered in Drosophila melanogaster’s embryonic cell [1]. Its evolution across various species is relatively conserved; however, duplication of the Hh gene in mammals revealed the involvement of three other members of the Hh family, namely the Sonic (Shh), Desert (Dhh), and Indian hedgehog (Ihh) [2]. Each of these genes has a diverse function in developing various tissues and organs; nevertheless, they utilize a similar pathway to be activated. In mammals, the Hh signaling is a rather complex relay mechanism that occurs in the primary cilium. Without the binding of Hh ligands to the Patched (PTCH), a 12-pass transmembrane protein receptor, the pathway remains suppressed due to the inhibitory effect of PTCH on the seven-pass transmembrane protein Smoothened (SMO) [3]. The binding of Hh ligands to PTCH relieves the inhibition of SMO protein, allowing its translocation into the primary cilium, where it rapidly accumulates [4]. Subsequently, activated SMO interferes with the proteolytic processing of glioma-associated oncogene homolog (GLI) proteins and promotes their dissociation from Suppressor of Fused (SUFU), allowing their translocation into the nucleus [5]. Through their DNA-binding domains, GLI activators (GLIAs) then bind to the GLI-binding consensus sequence 5′-GACCACCCA-3′ residing within promoters of target genes to initiate their gene transcription, such as cyclins (CCND1, CCND2), antiapoptotic factors (BCL2, BCLX), migratory genes (SNAI1, ZEB1), and its own pathway genes (PTCH1, GLI1) [6][7].
However, the diverse response of GLI in tissues is very dependent on the delicate balance between GLIAs and GLI repressors (GLIRs) combined. The negative regulation of GLI protein (Figure 1A) is regulated by its interaction with SUFU by virtue of its SUFU-binding domain. In the absence of the Hh ligand, SMO remains inactivated, which allows the tight association of SUFU with GLI [8]. GLI bound to SUFU is susceptible to phosphorylation events that promote its processing into repressors. G-protein coupled receptor 61 (Gpr161) localizes to the primary cilia to maintain high cyclic adenosine monophosphate (CAMP) levels and protein kinase A (PKA) activity [9], which phosphorylate P1-6 clusters located on GLI2/3 [10]. Their phosphorylation by PKA primes their subsequent phosphorylation by glycogen synthase kinase 3 beta (GSK3β) and casein kinase I (CKI) [11]. Phosphorylated GLI2/3 are recognized by the Cul1/β-TrCP complex, promoting their ubiquitination and subsequent proteasomal-dependent processing into GLIRs [12][13]. GLIRs then bind to the promoters of target genes to repress their transcription. In the presence of an Hh ligand, however, activation of SMO leads to the dephosphorylation of GLI2/3 P1-6 clusters and their dissociation from SUFU [10], favoring the translocation of GLIAs into the nucleus to initiate the transcription of target genes (Figure 1B). The expression of GLI1, a primary Hh target gene, serves to amplify Hh transduction at the transcriptional level further [14].

Figure 1. (A) The repression of Smoothened (SMO) by the Patched (PTCH) receptor in the absence of hedgehog (Hh) ligands promotes the interaction of Suppressor of Fused (SUFU) and glioma-associated oncogene homolog (GLI). G-protein coupled receptor 61 (GPR161) translocates to the primary cilium, which triggers high levels of cyclic adenosine monophosphate (CAMP). Elevated ciliary levels of CAMP maintain high levels of protein kinase A (PKA) activity, which phosphorylate GLI at P1-6 clusters. Consequently, phosphorylation of GLI by PKA prime its phosphorylation by casein kinase I (CKI) and glycogen synthase kinase 3 beta (GSK3β) further. Phosphorylated GLI is recognized by the β-TrCP, promoting its ubiquitination and partial proteasomal processing into a repressor. GLI repressor (GLIR) then translocates into the nucleus to repress target gene transcription. (B) The binding of the Hh ligand to the PTCH receptor alleviates its repression of SMO, allowing SMO translocation to the primary cilium. Activated SMO inhibits SUFU, allowing the dissociation of GLI from SUFU. Additionally, Gpr161 is removed from the primary cilium, causing low CAMP levels and PKA activity. The release of GLI from SUFU and low PKA activity results in the dephosphorylation of GLI, preventing its proteasomal processing into a repressor. Full-length GLI or GLI activator (GLIA) then translocates into the nucleus to transcribe target genes. Red upward triangle-headed arrow: upregulation; green downward triangle-headed arrow: downregulation; dotted black triangle-headed arrow: inactivation; bar-headed arrow: inhibition; dotted bar-headed arrow: loss of inhibition.
Typically, Hh signaling activation is classified into two general models: ligand-independent (Type I) and ligand-dependent (Type II and III) Hh signaling. This model centers around the various Hh pathway components leading to GLI activation, which can occur either through mutations in PTCH or SMO (ligand independent) or Hh ligand stimulation (ligand dependent); however, the transcriptional or epigenetic dysregulation of Hh pathway-related genes (e.g., aberrant methylation or excessive transcription factor activation) leading to GLI activation and the regulation of GLI beyond SMO transduction are often overlooked in this model. In this review, we describe a Hh signaling model that focuses on two different GLI regulation levels relevant to carcinogenesis: SMO-dependent and SMO-independent GLI activation. Arguably, these models provide a holistic view of the paradigms of hedgehog signaling networks involving GLI regulation at the SMO level or beyond and may be more relevant to current therapeutic strategies involving the development of SMO and GLI inhibitors for treating Hh-dependent cancers. Additionally, we present the latest clinical trial findings for the recent development of Hh inhibitors in cancer treatment and provide a comprehensive review concerning the relevance, limitations, and future perspective of SMO/GLI inhibitors as targeted cancer therapy. Importantly, GLI inhibitors have shown superior anticancer activity compared to inhibitors targeting upstream (Hh and SMO) of GLI in preclinical studies [15][16]. Furthermore, GLI inhibitors effectively suppress cancer growth in many GLI-dependent cancers that utilize an SMO-independent route of GLI regulation, of which treatment with upstream inhibitors has proven ineffective [17]. Thus, understanding GLI regulation paradigms is fundamental to developing novel GLI inhibitors worthy of moving forward to clinical settings, which may help set a new stage for Hh therapy in the future.

2. GLI Proteins and Their Domains

GLI is a part of the GLI-Kruppel family, characterized by the presence of C2H2-Kruppel-type zinc-finger (ZF) motifs [18]. Three homologs exist in vertebrates, namely GLI1, GLI2, and GLI3 (Figure 2). These proteins consist of overlapping domains, including a repressor and transactivation domain, and possess distinct but partially redundant functions. Since GLI1 lacks the repressor domain, it acts as a sole transcriptional enhancer. By contrast, GLI2 protein possesses both a repressor and two transactivation domains (TADs), A1 and A2, and acts as both a repressor and an activator. However, GLI2 mostly behaves as a transcriptional activator due to the inefficient processing of GLI2 into GLI2 repressor (GLI2R) [19]. Likewise, GLI3 protein possesses both repressor and activation domains but serves primarily as a transcriptional repressor due to an active processing determinant domain (PDD) that allows efficient processing of GLI3 into GLI3 repressor (GLI3R) [19][20]. Of note, GLI2 also contains a PDD but is inefficiently processed due to differences in amino residues critical for preventing complete degradation by the proteasome [20]. 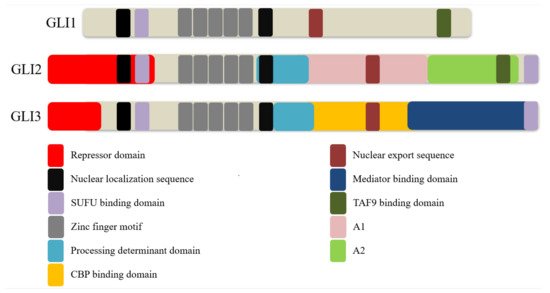 More
© Text is available under the terms and conditions of the Creative Commons Attribution (CC BY) license (http://creativecommons.org/licenses/by/4.0/)
Upload a video for this entry
Information
Subjects: Oncology
Contributor MDPI registered users' name will be linked to their SciProfiles pages. To register with us, please refer to https://encyclopedia.pub/register :
Mohammed Abdullah Alshawsh
View Times: 51
Revisions: 2 times (View History)
Update Time: 15 Sep 2021
Table of Contents
1000/1000
Hot Most Recent