Submitted Successfully!
Thank you for your contribution! You can also upload a video entry related to this topic through the link below:
https://encyclopedia.pub/user/video_add?id=14094
Check Note
2000/2000
HEIs, Latin America Circular Economy
Edit
This entry is adapted from 10.3390/su13179805

HEIs (Higher Education Institutions ) are main actors in the economic development and innovative potential of regions, but now and an increasing number of additional roles are expected. HEIs, as institutional actors, are enablers of social, economic, and cultural development, and sustainability. HEIs can foster collaboration between actors and catalyze public awareness and engagement in CE practices.

The research in the concept is intense, and it is derived mostly from experiences in developed countries from the Global North. Due to their industrialization, these countries have passed take-back laws that aim to reduce the toxicity of materials, increase the availability of recyclable materials and prevent pollution [18]. As a result, the CE concept has been considered to promote efficient production and sustainable consumption [19]. In fact, CE has already influenced policies in large global economies, such as China, Japan, the United Kingdom, and the European Union [15][16]. However, while ambitious and committed efforts towards CE were reported in these regions, the path that emerging economies are taking has not yet been properly researched [20]. For countries that rely on different activities such as agriculture, fossil fuel, and mineral extraction, specifically Latin American countries (LA countries), CE requires a different roadmap. The COVID-19 pandemic in Latin America revealed significant shortcomings in the linear economy; the vulnerability of global value chains, the depletion of natural resources, and the exacerbation of social inequalities. The CE shows great potential if inclusive development is promoted in these regions [2][21]. The coordination and engagement of multiple stakeholders are relevant for a CE transition. However, CE is not only a “technological and business-oriented issue, social and institutional contexts matter” [22]. Achieving circular economic development in Latin American countries requires transparent, robust, and accountable institutions. It was proven that institutions have a strong bearing on the capacity of governments in Latin America to achieve economic development [23].

Higher education institutions (HEIs) represent the type of institution in LA countries which has an essential roles not only for research but also for the unity of different actors such as government, industry, and civil society [24]. The intellectual capital is the value of intangible assets of HEIs, such as scholars’ knowledge and expertise, and it is relevant for any effort towards CE [25][26]. HEIs are considered main actors which aid all relevant efforts towards sustainable development [8][27][28][29]. Additionally, they are expected to play an essential role in the global sustainability agenda of these decades [30][31]. The engagement of HEIs in developing countries poses unique challenges [32][33], as HEIs are able to address regional and cultural differences when importing sustainability solutions from developed regions [34] and have a unique opportunity to harness the benefits of local circular practices, which are commonly performed in Latin American countries by people out of necessity [18]. While defining the role of HEIs regarding CE, there should be caution with “one-size-fits-all” approaches, and there may already be some degree of embeddedness of HEIs in local social issues, which should be understood as well [35]. 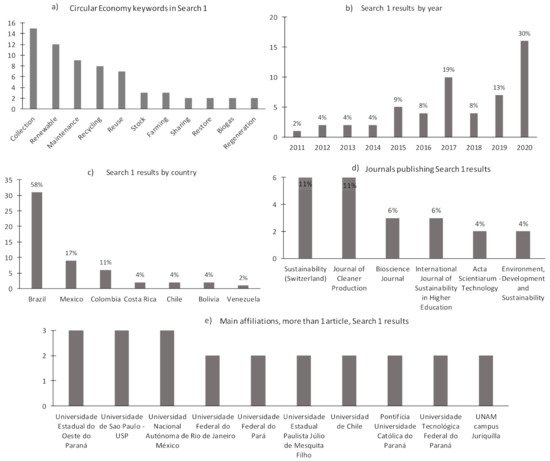 Figure 1. Results for Search 1.
Brazil is the main contributor to Search 1 results (58%), followed by Mexico (17%) and Colombia (6%). These three countries sum up 87% of the articles (Figure 1c).
Sustainability (Switzerland) and Journal of Cleaner Production are the journals with most articles, each with 11% of the articles (Figure 1d), and Brazilian universities are the main contributors, as expected given the fact that Brazil is the country which contributed with more than half of the articles. A Chilean and a Mexican university count more than one publication each (Figure 1e).
Figure 2 shows the author keywords co-occurrences (minimum three occurrences) for selected articles of Search 1 (53 articles). The most occurring author keywords are: “sustainable development”, “sustainability”, “Brazil”, “recycling”, and “waste management.” Other keywords with high occurrence are related to water and energy: “wastewater”, and “renewable energy.” This figure identifies that the most researched topics in these articles are related to waste management and energy efficiency and that the HEIs involved are mainly from Brazil. 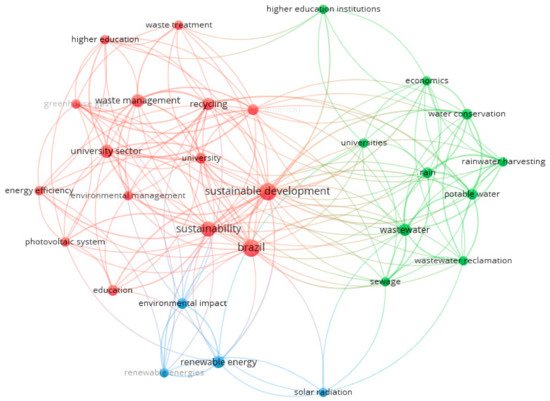 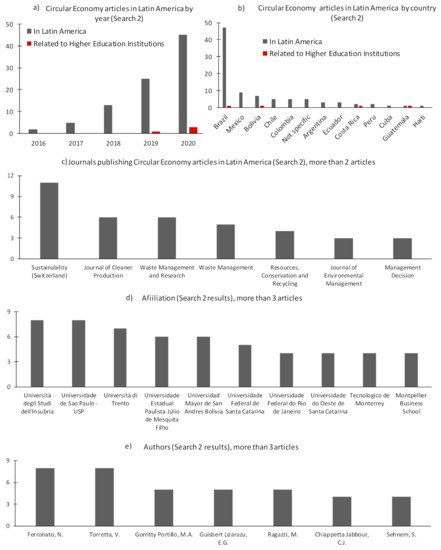 Figure 3. Results for Search 2.
Half of the results (52%) in Search 2 are from Brazil, as Figure 3b shows, which is remarkable compared with the second country on the list, Mexico, with approximately 10% of the publications. These are followed by Bolivia (8%), where the authors with more publications (See Figure 3e) have been working with topics related to waste management [125][126][129][145]. Brazil, Mexico, Bolivia, Chile, and Colombia sum up 80% of the results.
The journals with more publications are Sustainability (Switzerland) (12%), Journal of Cleaner Production (7%), Waste Management and Research (7%), and Waste Management (6%). The rest counted for 4% or less of the results (Figure 3c).
Figure 3d shows the affiliations with more than three articles, and Figure 3e shows the authors with more than three articles. Most occurring affiliations include Italian HEIs, which correspond to the top two most occurring authors. The most occurring authors hold co-authorship in some articles [123][125][126][127][129][164]. Most top affiliations are Brazilian HEIs, but there is also a Bolivian and a Mexican HEI.
Figure 4 shows the author keyword co-occurrence (keywords occurring at least four times) from Search 2 results. “circular economy” is the most occurring keyword, as these articles directly address the current CE concept. Besides that, the most occurring keywords are: “sustainable development”, “waste management”, “recycling”, “Brazil”, “sustainability”, “human”, and “municipal solid waste”. This evidences that approaches related to waste management are at the core of CE research in LA countries and that Brazil is the main contributor. 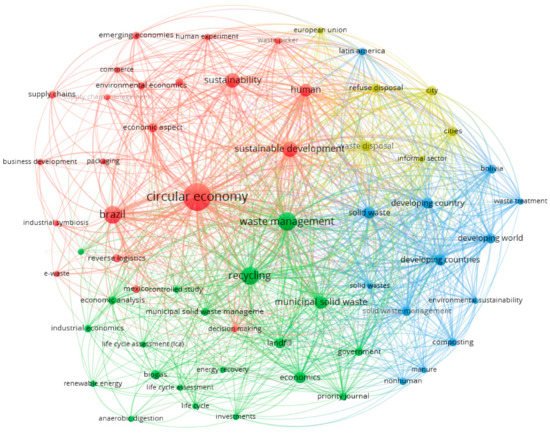 International commitments, such as the 2030 Agenda and the Sustainable Development Goals, exert pressure to improve the engagement level of HEIs in some areas of sustainability action (energy efficiency and renewable energy), which may be related to CE [179]. The importance of HEIs for sustainability challenges has been highlighted by national and international frameworks [180].
Over the last two decades, the interest in higher education for sustainable development has increased among scholars [30]. HEIs are main actors in the economic development and innovative potential of regions, but now and an increasing number of additional roles are expected [181][182][183]. HEIs, as institutional actors, are enablers of social, economic, and cultural development [33][34][182][184][185][186][187][188], and sustainability [180][189][190][191]. HEIs can foster collaboration between actors and catalyze public awareness and engagement in CE practices [192]. A main contribution of HEIs is the generation of human capital, which understands the need to pursue sustainable development and is very important to drive the implementation of CE [10][107][193]. It was shown that the intellectual capital of HEIs influences directly and positively in such initiatives [26][27]. The role of HEIs in developing countries should be addressed adequately given the specific context where it operates [184]. It is clear that all HEIs are now expected to engage actively in national and regional development, both in developed and developing countries; however, the way that HEIs should engage should be agreed [33].
The role of HEIs has evolved. Now sustainable development and outreach (“third mission” contributing to socio-economic development) compromises are expected by society (stakeholders, civil society, governments, and industry) [32][35][194]. HEIs may promote action towards sustainability by internal operative and cultural changes and by their triple function: teaching, researching, and community engagement [9][28]. Regional HEIs can engage closely with local communities, providing the region with a self-developing capacity, thus obtaining mutually beneficial outcomes [29]. HEIs outreach can be addressed by building collaboration channels with local actors (communities, planners, government bodies, NGOs) and fostering student participation in engagement and professional projects [31]. Thus, HEIs can tackle circular behaviors already established in the local communities (which may be disregarded by current CE theory), gather them as a local knowledge body, and merge them with outside knowledge on CE business models. HEIs have a unique opportunity to harness the benefits of the local circular practices commonly performed in developing countries by people out of necessity, not by choice [18].
There are various ways in which HEIs relate to regional development, which depend on the characteristics of the region [188]. If the role of HEIs regarding CE in Latin American countries is to be defined, simultaneously occurring challenges should be acknowledged, such as massification, globalization, marketization, digitalization [28], and now even adaptation to the COVID Pandemic, [195]. To cope with these increasingly complex demands, HEIs should be integrative and networked (University 4.0) [28].

4. Addressing the Role of Higher Education Institutions for the Transition to a Circular Economy in Latin American Countries

Table 1 sums the factors that aid in defining the role of HEIs for the transition to a CE in Latin American countries. The way HEIs engage in developed regions may not be suitable to less developed regions, given poorer infrastructure and technology conditions [196], different cultural traits, and institutional constraints, which may hinder the catalytic role of HEIs in developing countries [33]. There are different types of HEIs (research, entrepreneurial, and engaged), and thus different roles and engagement modes for each type [182]. In the least developed regions, research-oriented HEIs may be the only link to the global scientific knowledge network, playing a central role in fostering development in such areas [184]. These institutions allow knowledge and technology transfer from the Global North, where CE is gaining great momentum [197].
Developing countries face some unique challenges and require some unique elements regarding HEIs, especially research-oriented ones (when compared with developed countries): creation and retention of a scientific community, research relevance to society and industry, cultural and social development and critique, formation of a new generation of scholars and technicians, research in national languages [184].
Furthermore, practical efforts of HEIs do not occur in isolation but require the engagement of other actors and stakeholders and benefit from participating in formal and informal networks [29][187][197]. There must exist an absorptive capacity in the region to incorporate novel knowledge into society [33].
CE implementation requires both top-down and bottom-up approaches [15]. However, initiatives on campus may go beyond. Brinkhurst et al. [198] suggested considering “faculty and staff” as the “institutional middle”, whose leadership roles are critically important to change behaviors towards sustainability.
Table 1. Factors that aid to define the role of higher education institutions for circular economy in Latin American countries.