Submitted Successfully!
Thank you for your contribution! You can also upload a video entry related to this topic through the link below:
https://encyclopedia.pub/user/video_add?id=13680
Check Note
2000/2000
E-Waste in Africa
Edit
This entry is adapted from 10.3390/ijerph18168488

How to safely dispose of waste products coming from human activity is a global problem. Often in countries without adequate regulation, wastes are simply discarded. Most countries put wastes into landfills, but without adequate control landfills stink, leachate coming from the landfill can contaminate water and methane escaping from degradation of organic material contributes to climate change. In addition, landfills often attract vermin than can cause and spread disease. In many poor countries, people—including children—scavenge landfills for items of value, increasing risk of injury, infection and exposure to dangerous substances. Incineration is an alternative to landfills, but if incinerators are not operated with appropriate controls, they release toxic metals and dioxins that have the potential to cause significant harm to human health [1][2].
The harm to the environment is made worse when the discarded material is not readily degradable, as is the case with plastics that now contaminate land, lakes, streams and even the ocean. About eight million metric tons of plastics enter the oceans each year [3]. Hazardous wastes, defined as wastes that are ignitable, corrosive, reactive or toxic, add to the problem and are often intermixed with non-hazardous solid wastes. Hazardous wastes can cause significant harm to human health if not properly contained and disposed, including neuropsychological harm to children [4] and elevations in cancer and birth defects [5].
The term electronic and electrical waste (e-waste) refers to “electrical or electronic equipment, which is waste, including all components, subassemblies, and consumables, which are part of the equipment at the time the equipment becomes waste [6]”. E-waste includes large, discarded appliances, such as refrigerators, air conditioners and washing machines, as well as small personal items, including computers, televisions, mobile phones, and many other devices that are operated by electrical currents or batteries [7][8]. E-waste contains plastics, ceramics, metals, glass, toxic chemicals, such as organic flame retardants and polychlorinated biphenyls (PCBs), and various other potentially hazardous compounds [9][10].
In 2019, the world generated an estimated 53.6 million metric tons (Mt) of e-waste, or an average of 7.3 kg per person [11]. Furthermore, only 17.4% of this was officially documented as properly collected and recycled. Africa generated a total of 2.9 Mt of e-waste in 2019, or 2.5 kg per capita, the lowest regional rate in the world.
The value of the raw materials in global e-waste is estimated to be 57 billion USD, with iron, copper and gold contributing the most [11]. In some African countries, recycling and dismantling electronic devices has become a major source of employment and income. For example, in Ghana in 2010, an estimated 10,000 to 15,000 people were involved in refurbishing old and second-hand computers while another 20,300 to 33,600 were estimated to be working in recycling and e-waste management [12]. More recently this number has been estimated at more than 40,000 [13]. In 2010, an estimated 201,600 people across Ghana, including families and children, were dependent on e-waste recycling and management for support [12]. This number has almost certainly grown over time.
E-waste includes many substances that are dangerous to the health of humans and the environment if released in an unsound manner. E-waste recorded in 2019 contained as much as 50 tons of mercury and 71 kt of brominated flame retardants [11]. The improper dumping and recycling of e-waste in several African countries serves as a major source for the release of harmful substances. These harmful substances can pollute soil, water, air, dust, and food sources [14][15]. Numerous studies have reported contamination of e-waste workers and local residents with toxic metals, dioxins and furans, brominated flame retardants (BFRs), PCBs, polyaromatic hydrocarbons (PAHs), per- and polyfluoroalkyl substances (PFAS), particulate matter and other air pollutants, phthalates and other chemicals in plastics, and the chemical mixtures at these sites [16][17][18][19][20][21][22]. There are other chemicals present in e-waste for which little information is available. Growing research has found associations between e-waste recycling and a range of adverse health effects, including negative birth outcomes, impaired neurological and behavioral development, impaired thyroid function, and increased risk of chronic diseases later in life [23].
While there is significant exposure risk to all individuals who are involved in informal e-waste recycling [24] children are particularly vulnerable to exposure from hazardous chemicals released during informal or unregulated e-waste recycling activities due to their developing organs and immune system, rapid growth, and developmental vulnerabilities. Child labor has been documented at informal e-waste recycling areas across the world. Children as young as five years of age have been observed engaging in e-waste activities in Ghana [12]. Children breathe more air and ingest more food and water relative to their size than adults. As a result, children have higher intakes of pollutants relative to their size than adults. In addition, children’s bodies metabolize and eliminate toxic substances differently compared to adults, making them less able to break down and eliminate some hazardous substances. Children are also closer to the ground, where some toxicants may be at their highest concentration, and are more likely to put their hands, objects, and soil into their mouths, increasing their risk of ingesting contaminants [25][26][27]. Steps taken to protect children will also serve to protect adults.

2. What Chemicals Are Present in E-Waste?

Tsydenova and Bengtsson [28] reviewed the distribution of toxic chemicals in different items commonly found in e-waste. Their research indicated that common electronic items and their components, such as batteries, switches, relays, and printed circuit boards, may contain antimony, barium, beryllium, cadmium, copper, gold, lead, lithium, mercury, nickel, silver, palladium, and zinc. Items are also known to contain a variety of organic chemicals and rare earth metals, many of which have not been studied for health effects. Plastics may constitute as much as 30% of e-waste by weight [29] and BFRs are added to most plastics to reduce flammability. BFRs are often found in computers and other electronics for the same reason. As many plastics contain chlorine, combustion of plastic results in the formation of both chlorinated and brominated dioxins and furans. Figure 1 shows the sources of some of these chemicals. 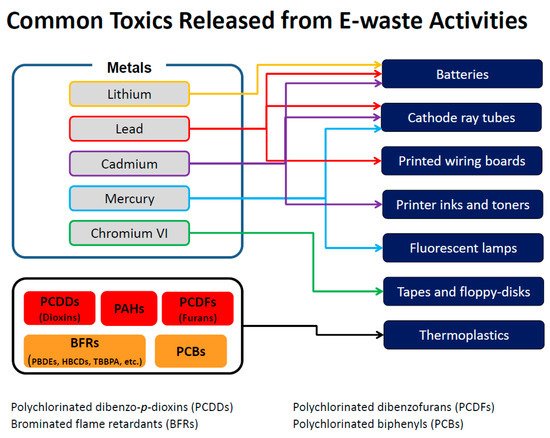 Figure 1. Sources and chemicals released from some specific e-waste sites. Adapted from: Frazzoli, et al. [30].
Landfills in African countries containing e-waste have shown elevations of many different potentially hazardous metals [31]. Soils around an informal e-waste recycling site in Nigeria have displayed elevated levels of copper, lead, zinc, manganese, nickel, antimony, chromium, cadmium [32]. Alabi et al. [33] compared levels of metals in soils and plants at e-waste sites in China and Nigeria and found that both sites had significant elevations of lead, copper, chromium, nickel, cadmium, and manganese relative to Dutch and Chinese standards. Several reports have investigated blood concentrations of metals in the blood of residents living near e-waste recycling sites as compared to control areas. Li et al. [34] reported that residents living near Taizhou, when studied two years after the site was closed, had elevated levels of chromium, arsenic, cobalt, nickel, silver, tin, mercury, lanthanum, and cerium as compared to residents at a control site. In Ghana, workers at an e-waste recycling site displayed significantly higher concentrations of blood lead, cadmium, chromium, and urinary nickel when compared to non-e-waste workers [35]. Many of these metals are toxic, especially to children.

3. How Does E-Waste Pollute the Environment?

E-waste is recognized as a resource as it contains valuable materials [18]. However, in developing countries many e-waste recyclers use primitive methods, such as mechanical shredding, manual dismantling and sorting and open burning, to isolate these valuable materials [16][36]. Plastics are burned, often at low temperatures, to dispose of computer casings and to retrieve metals from electronic chips and other components leading to the formation of dioxins [37]. Old tires may be burned to generate the heat to melt wires and incineration is used to extract valuable materials [38]. Since there are often inadequate stack emission controls, incineration can also release harmful heavy metals into the environment [37]. Strong acids are used to extract metals from printed circuit boards [39].
These methods result in severe air pollution containing many toxic substances around e-waste recycling areas. Particulates and other air pollutants are inhaled by workers and nearby residents. In addition, chemicals escape and may contaminate dust, soil, and water in communities around dump sites leading to additional routes of exposure, such as dermal contact and consumption of contaminated food and water [40]. E-waste contains as many as 1000 different harmful substances that have been identified as either components of e-waste or involved in the processing systems engaged by informal recyclers [41]. Fetuses, infants and children are at particular risk as their bodies are undergoing vital development. Exposure to such toxicants results in the disruption of these development processes and may result in long-term health impacts. Physical injuries, including burns, cuts and scrapes and musculoskeletal injuries, are also a major problem among e-waste workers in African countries, due to lack of safety measures, training, and education [42]. Some of the hazardous substances found in e-waste and their associated health effects are discussed in detail below. As very few health effects studies have been completed at African sites, the findings are supported by additional research completed at other international e-waste sites.

More
© Text is available under the terms and conditions of the Creative Commons Attribution (CC BY) license (http://creativecommons.org/licenses/by/4.0/)
Upload a video for this entry
Information
Subjects: Environmental Sciences
Contributor MDPI registered users' name will be linked to their SciProfiles pages. To register with us, please refer to https://encyclopedia.pub/register :
Tamba Solomon Lebbie
View Times: 59
Revisions: 2 times (View History)
Update Time: 05 Sep 2021
Table of Contents
1000/1000
Hot Most Recent