Submitted Successfully!
Thank you for your contribution! You can also upload a video entry related to this topic through the link below:
https://encyclopedia.pub/user/video_add?id=13491
Check Note
2000/2000
Salt Stress in Avocado
Edit
Upload a video
This entry is adapted from 10.3390/plants10081672

Avocado (Persea americana) is a crop of rising importance, with high nutritional and economic values.

Salt stress is a major limiting factor in avocado.

This entry’s objective was to evaluate the physiological salt response of avocado as a function of the rootstock.

Commercial modern fruit orchards are typically composed of trees with scions grafted onto rootstocks of different genetic origins. Grafting is a major element of propagation processes and rootstock selection is a key component in successful and healthy orchard establishment [1]. Rootstock selection can be based on adaptability to soil characteristics, pest and/or disease pressure, and desired root–scion propagation and growth interactions. Avocado (Persea americana) is a crop of rising importance, with high nutritional and economic values [2]. The expansion of avocado cultivation areas might be challenging due to the crop’s susceptibility to stress brought upon by weather, irrigation water quality, and soil conditions including temperature, acidity, oxygen availability, and salinity [3][4][5][6]. The sensitivity of avocado to such conditions highlights that trees must be conditioned and adjusted to their specific local environment. The complexity in advancing its production increases when considering that avocado consumers generally prefer a specific variety (‘Hass’) [7]. Rootstocks must therefore be matched to cultivation conditions and rootstock–scion relationships and subsequent crop performance should be evaluated. Rootstocks have long been used to help sensitive species cope with biotic and abiotic stresses. With avocado, most research has focused on diseases such as phytophthora root rot [8], botryosphaeria branch dieback [9], and verticillium wilt [10]. Abiotic stresses addressed in rootstock studies include drought [11], calcareous soil [12], and salinity [13].
Salt susceptibility in agricultural crops is defined by a reduction in plant growth, development, and productivity [14]. Avocado is considered one of the most salt-sensitive crops [15]. Its rootstocks are of three primary genetic sources: Mexican, West Indian, and Guatemalan [16]. Mexican rootstocks were found to be more susceptible to salinity than others [17][18]. Physiological responses of avocado to salt exposure or wastewater irrigation were investigated and reviewed during the last 15 years in a number of studies [6][19][20][21]. The studies focused mostly on scion photosynthesis rates, productivity, and nutritional status, revealing the negative effect of salinity exposure on these indices. In our opinion, the influence of rootstocks on avocado response to salinity is particularly engaging, and we therefore invested in data collection from many rootstocks grafted with the same (Hass) scion, in order to identify their distinct effects.
Salt stress is known to negatively affect growth and productivity through both osmotic and toxic mechanisms [22]. The osmotic damage is expressed as changes in water status, similar to that of drought, measured by reduction in stem water potential (SWP) [23][24]. The potential refers to the energy status of water in a plant, which reflects the balance between water status in the soil, water taken up from soil by roots, atmospheric water status and demand, and plant physiological responses, particularly stomatal resistance or closure [25]. The root’s water uptake is highly influenced by exposure to salts, which may change root hydraulic characteristics and decrease their function [26][27]. Salt exposure decreases water potential and consequently inhibits a number of metabolic and physiological functions. To compensate for salinity-induced stress, some plants respond through osmotic adjustment [28]. This mechanism includes an active gradual decrease in cellular water content, which leads to accumulation of solutes within the cell and water movement inside it [29]. Osmotic adjustment develops gradually under slow and uniform rates of dehydration. With this drought-acclimation mechanism, plants maintain high turgor potential under dehydration and avoid inhibition of their functions. Under drought stress, high solute concentrations may indicate tolerance, but when salt stress causes osmotic instability, high leaf osmolality might imply the opposite [30][31]. Salinity also reduces CO2 assimilation, due to stomata closure [32]. The toxic effect of salt exposure includes chlorophyll degradation due to chloride (Cl) accumulation in the chloroplasts and leaf necrosis due to an increase in the sodium:potassium (Na:K) ratio [33][34][35]. These effects may also decrease the plant’s photosynthetic rates and consequently its reproduction and yield. 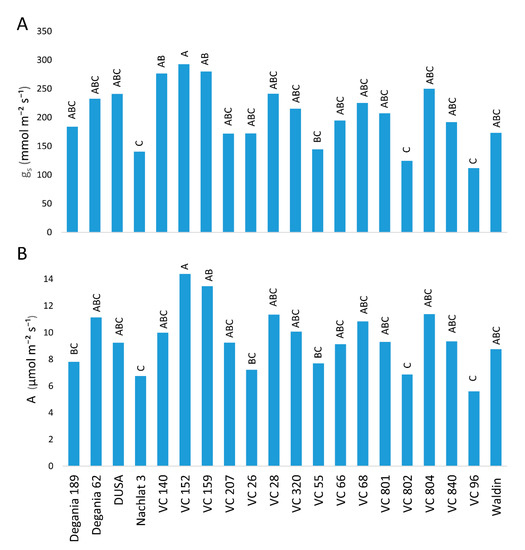 Figure 1. Stomatal conductance (A) and CO2 assimilation (B) of ‘Hass’ avocado trees grafted onto various rootstocks, after 18 months of salinity exposure. Different letters represent significant (p ≤ 0.05) differences between rootstocks.
Spectral reflectance was previously used to measure salinity damage in sunflowers [42] and several landscape species [43]. In avocado orchards, spectral tools were found to be accurate in evaluating the vegetative status [44]. NDRE was chosen for our experiment due to its high sensitivity compared with NDVI [45]. NDRE values supported our other findings of VC 840 and Dusa as the most salt-susceptible rootstocks in the orchard (Figure 2).

Figure 2. Normalized difference red edge (NDRE) index of ‘Hass’ avocado trees grafted onto various rootstocks, after 18 months of salinity exposure. (A): NDRE mosaic visualization over the orchard map. (B): average NDRE values according to rootstock. Different letters represent significant (p ≤ 0.05) differences between rootstocks.
The highest trichome density was found in the leaves of VC 840 (Figure 3) and the lowest in VC 804, which exhibited high LAI and the lowest leaf Cl in 2019. It is noteworthy that LAI and trichome density were negatively associated in other rootstocks as well, although we did not find a significant correlation between these indices. This finding is novel for avocado. As trichome density was found to increase under salinity in several other plants [46][47][48], we suggest our original finding as an additional indicator for salt susceptibility in avocado rootstocks. The physiological or developmental mechanism that correlates trichomes with salinity exposure is a subject for additional research.

Figure 3. Trichome density on the abaxial side of ‘Hass’ avocado leaves. (A): the effect of rootstocks on trichome density after 18 months of salinity exposure. (B): live avocado leaves of VC 152 and VC 840 under a stereoscope. Different letters represent significant (p ≤ 0.05) differences between rootstocks.

Figure 5. Salt content in leaves of ‘Hass’ avocado trees grafted onto various rootstocks. (A): chlorides. (B): sodium. Different letters (upper case for 2019 and lower case for 2020) represent significant (p ≤ 0.05) differences between rootstocks. The dashed line represents the avocado leaf Cl upper standard suggested by the University of California, above which is considered harmful to the trees. 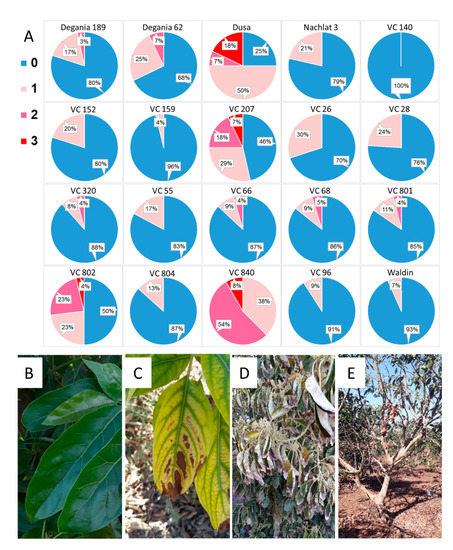 Figure 6. Salt damage in the orchard after a year of irrigation with water high in salt. (A): visual survey. (B): healthy avocado leaves. (C): leaf necrosis. (D): severe leaf burns. (E): defoliation. In the survey, blue (0) represents no visual salt damage and pink/red shades (1–3) represent salt damage in increasing severity, from light necrosis to tree defoliation.
Salt stress is known to negatively affect plant productivity [36]. Reproductive development can be quantified in several phenological stages—flowering, fruit set, fruit growth, and the resulted yield. In this work, we chose the final number of fruit per tree (FTP) as the objective, but did not find strong associations between the stress indications and the yields. The highest FTP was found for VC 68 and Degania 62, and the lowest was recorded for VC 26, VC 802, VC 801, and Waldin (Figure 7). However, VC 802 had a relatively high leaf Cl concentration and low photosynthesis rates, and Degania 62 exhibited high LAI and low trichome density. We assume that in an alternate-bearing tree like avocado, the salinity effect over the yield will be strengthened as the salt treatment continues for years. 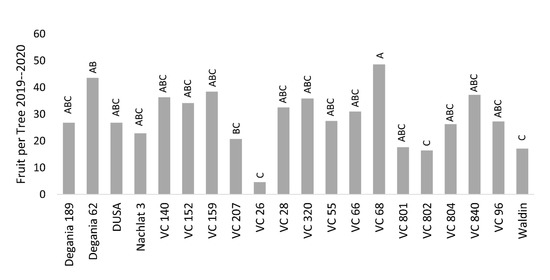 Figure 7. Biannual yield (average number of fruit per tree) of ‘Hass’ avocado trees grafted onto various rootstocks, under salinity exposure. Different letters represent significant (p ≤ 0.05) differences between rootstocks.
After considering all the results, we focused on two rootstocks with opposing responses to salt—VC 840 (most susceptible) and VC 152 (least susceptible). Measurements of SWP revealed a significant difference between these rootstocks (Figure 8): VC 840’s SWP was more negative even before the initiation of salt treatment, and the trees exhibited stress indication weeks before the VC 152 trees did. VC 840 stress reaction was more intensive than that of VC 152, as the relative change in SWP due to saline irrigation was stronger in VC 840 (Figure 8). This result, which suggests that differences in salt sensitivity can be predicted even before salinity exposure, requires further validation and extension.

Figure 8. Stem water potential in ‘Hass’ avocado trees grafted onto either VC152 or VC840 rootstocks along eight weeks of salinity treatment. * represents a significant difference (p ≤ 0.05) between the rootstocks. Different letters represent significant differences between measurement dates in a specific rootstock.
To conclude, salinity is one of the most limiting factors in avocado cultivation, and finding a tolerant rootstock is a challenge for the global avocado industry. There are hundreds of known avocado rootstocks from which commercial nurseries choose their grafting material. Our work was based on ongoing Israeli research programs, representing a wide range of rootstocks with divergent characteristics and relatively high tolerance to biotic and abiotic stresses. The presented work contributes to the global avocado database by comparing the physiological response of 20 commercial rootstocks to salt exposure. In addition to our specific results, we believe that the methodologies that were used in the study can provide an applicative and desirable tool for avocado growers and researchers in areas concerned with soil salinity, particularly when induced through low-quality irrigation water.

More
© Text is available under the terms and conditions of the Creative Commons Attribution (CC BY) license (http://creativecommons.org/licenses/by/4.0/)
Upload a video for this entry
Information
Subjects: Plant Sciences
Contributor MDPI registered users' name will be linked to their SciProfiles pages. To register with us, please refer to https://encyclopedia.pub/register :
Silit Lazare
View Times: 37
Revisions: 2 times (View History)
Update Time: 24 Aug 2021
Table of Contents
1000/1000
Hot Most Recent