Submitted Successfully!
Thank you for your contribution! You can also upload a video entry related to this topic through the link below:
https://encyclopedia.pub/user/video_add?id=1309
Check Note
2000/2000
Tropomyosin mutation Glu173Ala
Edit
Upload a video
This entry is adapted from 10.3390/ijms21124421

Substitution of Glu173 for Ala in Tpm3.12 (E173A) is associated with congenital muscle weakness. It was found that this mutation increases myofilament Ca2+-sensitivity and inhibits in vitro actin-activated ATPase activity of myosin subfragment-1 at high Ca2+. In order to determine the critical conformational changes in myosin, actin and tropomyosin caused by the mutation, we used the polarized fluorimetry technique. We observed changes in the spatial arrangement of actin monomers and myosin heads, and in the position of the mutant tropomyosin on the thin filaments in muscle fibres at various ATPase cycle stages. At low Ca2+ the E173A mutant tropomyosin shifts abnormally towards the inner domains of actin at all stages of the cycle. The number of switched-on actin monomers and strong-binding myosin heads increases even at relaxation. Contrarily, at high Ca2+ the amount of the myosin heads strongly bound with F-actin slightly decreases. The changes in the balance of the strongly bound myosin heads in the ATPase cycle may underlie the occurrence of muscle weakness. W7, an inhibitor of troponin Ca2+-sensitivity, restores the number of strong-binding myosin heads at high Ca2+ and inhibits it at relaxation, suggesting the possibility of using Ca2+-desensitizers to reduce the damaging effect of the E173A mutation on muscle fibre contractility.

In skeletal muscle there are three main tropomyosin isoforms which are encoded by the TPM1, TPM2 and TPM3 genes [11]. Mutations give rise to a wide spectrum of clinically, histologically and genetically variable neuromuscular and cardiac disorders [12]. The numerous point mutations in TPM3 gene were found in patients with such congenital pathologies as nemaline myopathy, distal arthrogryposis, congenital muscle fibre type disproportion, cap-myopathy [13]. The E173A mutation in Tpm3.12 encoded by the TPM3 gene was detected in a 7-year-old boy with hypotonia, feeding difficulties, motor delay and scoliosis, requiring non-invasive ventilation while ambulant [14]. Muscle biopsies showed fibre type disproportion. However, the molecular mechanisms underlying the muscle fibre dysfunction caused by this mutation are unknown.

We studied the effect of the E173A mutation in recombinant Tpm3.12 on actin-myosin interaction at different simulated stages of the ATPase cycle (±Ca2+). Conformational changes in actin, myosin head (S1) and tropomyosin modified by fluorescent probes were studied in the ghost muscle fibres using polarized fluorimetry, a well-established technique for this application [15][16].

The results show that tropomyosin with E173A replacement affects the proportion of the switched-on and switched-off actin monomers, the balance of myosin subfragment-1 (S1) strongly and weakly bound with F-actin, and the tropomyosin position during the ATPase cycle. It is assumed that the E173A mutation weakens the ability of troponin-C to switch actin monomers on and activates the strong binding of the myosin heads to F-actin at low Ca2+ by suppressing the troponin-I ability to switch actin monomers off, and also induces the appearance of the strongly bound myosin heads (the rigor-like myosin heads) at relaxation, which may be one of the causes of muscle weakness. We suggest that replacing negatively charged glutamate 173 with neutral hydrophobic alanine may cause the salt bridge between tropomyosin residues 173 and 169 to break, and as a result, partially destabilize the tropomyosin molecule in the region of the site for tropomyosin binding to troponin-T. The alteration in the tropomyosin to troponin-T interaction can result in disruption of the ability of troponin to switch the thin filaments on and off. This can lead to inhibition of the ATPase activity at high Ca2+ (a decrease in force production) and increase in the Ca2+-sensitivity and the appearance of the rigor-like myosin heads at relaxation. The so-called rigor-like cross-bridges can be one of the reasons for contractures and disorganization of muscle fibres. 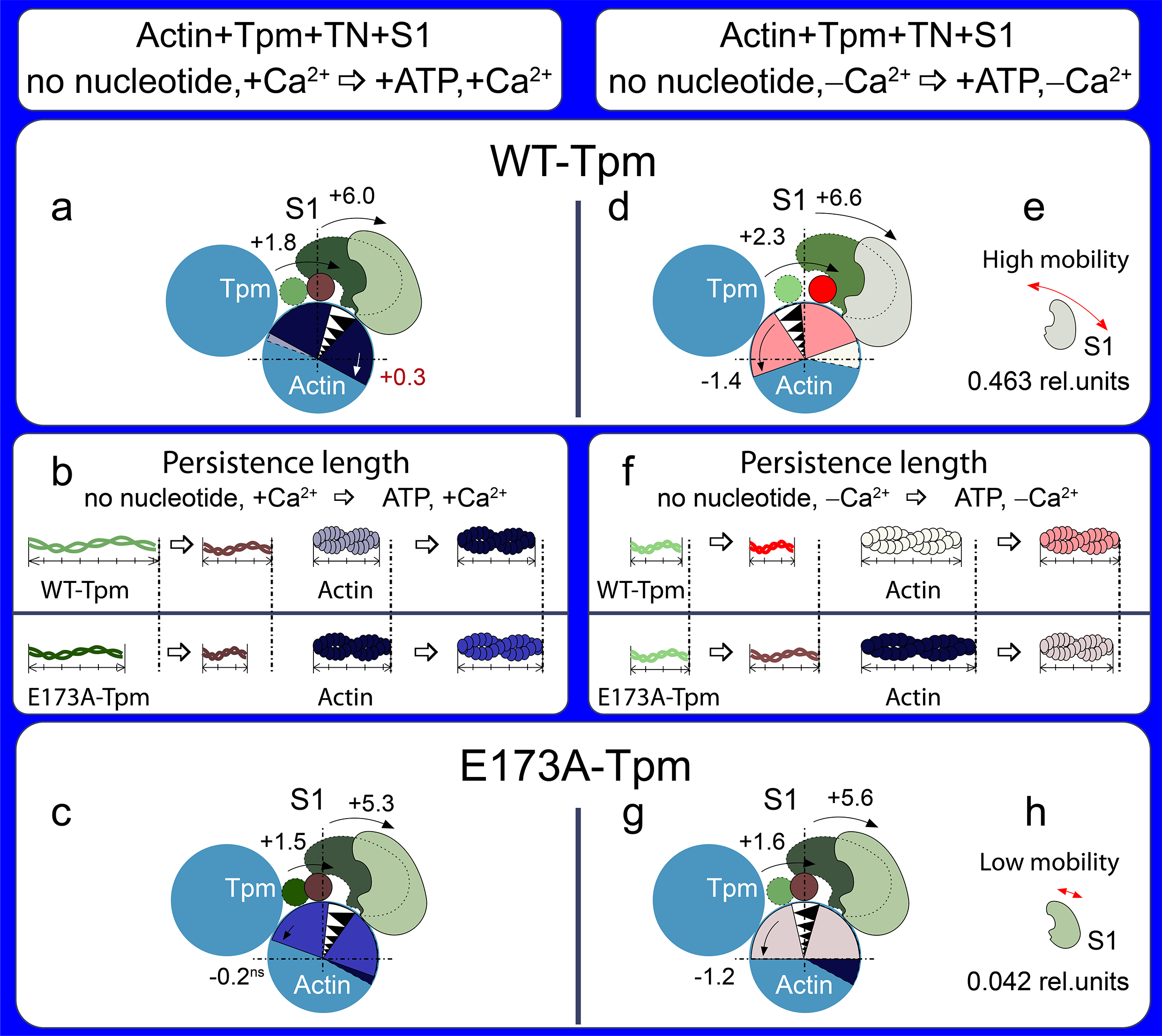 It seems important to reduce the effect of the E173A mutation. The Ca2+-desensitizer W7 is able to restore the ability of troponin to activate the strong binding of the myosin heads to F-actin at high Ca2+ and to reduce the number of rigor-like myosin heads at relaxation. However, W7 does not restore the ability of troponin to switch the thin filaments off at low Ca2+. Therefore, W7 can be used more likely to reduce the damaging effect of the E173A mutation on muscle contractility.

More
© Text is available under the terms and conditions of the Creative Commons Attribution (CC BY) license; additional terms may apply. By using this site, you agree to the Terms and Conditions and Privacy Policy.
Upload a video for this entry
Information
Subjects: Biochemistry & Molecular Biology
Contributor MDPI registered users' name will be linked to their SciProfiles pages. To register with us, please refer to https://encyclopedia.pub/register :
Yurii Borovikov
View Times: 251
Revisions: 3 times (View History)
Update Time: 27 Oct 2020
Table of Contents
1000/1000
Hot Most Recent