Submitted Successfully!
Thank you for your contribution! You can also upload a video entry related to this topic through the link below:
https://encyclopedia.pub/user/video_add?id=13024
Check Note
2000/2000
Sarcopenia for Liver Transplant Patients
Edit
Upload a video
This entry is adapted from 10.3390/life11080740

Optimizing patients’ condition before liver transplantation (LT) could potentially improve survival of LT patients. We focused on sarcopenia, as a common factor in liver transplant candidates that can impact their cardiopulmonary performance at the point of listing, morbidity, and mortality after LT. We performed a single-center cohort study on 98 consecutive patients with liver cirrhosis who were transplanted between March 2015 and December 2017. The third lumbar vertebra skeletal muscle index (L3SMI) was calculated using CT imaging to distinguish sarcopenia at listing for LT. Data regarding liver function, body mass index (BMI), cardiac biomarkers, the peak oxygen uptake (VO2) and LT outcome were collected and correlated to L3SMI. For data analysis the Dell Statistica (Version 13. Dell Inc., Rondrock, TX, USA) was used. In total, 98 cirrhotic patients were included. Fifty-five (56.1%) patients, mostly males, had sarcopenia according to L3SMI, with the lowest L3SMI in males with alcohol-related liver disease. Lower L3SMI correlated with lower BMI, lower VO2 peak, and higher NTproBNP (all p < 0.001) and revealed an essential correlation with prolonged ICU stay (r = −0.21, p < 0.05). 33 patients were unable to perform cardio-pulmonary exercise test, mostly sarcopenic (67%), with more advanced liver insufficiency (assessed with CPC and MELD scores) and longer stay at ICU after LT (all p < 0.001). Sarcopenia was common among LT recipients. It was associated with inferior result in cardio-pulmonary performance before LT and prolonged ICU stay after grafting.

Physical inactivity, sarcopenia, and frailty are highly prevalent, independent predictors of morbidity and mortality in patients with cirrhosis. In combination with advanced age, malnutrition, decreased hepatic protein synthesis, catabolism, hyperammonemia, increase in proinflammatory cytokines and low testosterone level, cardiac and skeletal muscle deconditioning results in reduced cardiac function and physical frailty as well as decreased skeletal muscle mass and strength [1].
Sarcopenia is defined by the triad of a generalized loss of skeletal muscle mass, strength, and function [2] and may be a marker of poor general status when predicting outcome in populations undergoing general surgery [3] and renal transplantation [4]. It seems to be a better indicator of malnutrition than serum albumin, weight, and body mass index (BMI), which may be modified by ascites in patients with liver cirrhosis. Nowadays, sarcopenia is recognized to be a highly prevalent and life-threatening complication of cirrhosis, irrespectively of the origin of the liver disease. Male-sex and decompensation of the liver function according to Child–Pugh class (CPC) C cirrhosis were independent predictors of sarcopenia what was an independent predictor of mortality [5]. Sarcopenia in liver transplant candidates was associated with increased waitlist mortality [5][6][7][8] and sepsis-related death on the waitlist [8]. Moreover, sarcopenia progresses during the transplant process and up to 1-year after surgery [9]. A recent meta-analysis showed the negative impact of sarcopenia on the results of liver transplantation (LT) [10]. Post-transplant outcomes associated with sarcopenia include prolonged hospital and intensive care unit (ICU) stay, increased risk of infection [11] and post-transplantation mortality [12][13][14][15][16][17].
Although the liver transplantation (LT) outcomes depend on recipients, donors and operative procedural characteristics, the shortage of donor livers increases the need to maximize the life-saving capacity of procured livers in terms of older candidates to surgery with more severe end-stage liver disease and greater comorbidities (e.g., metabolic syndrome). Additionally, cardiovascular events (CVE) contribute to excess serious complications and non-liver-related death after LT [18]. The goal of cardiovascular evaluation before LT is detection of severe cardio-pulmonary disease which makes LT futile. In general, cardiologic workup is focused on ischemic heart disease and its complications. However, there is a lack of routine dynamic evaluation of cardio-pulmonary performance of end-stage liver disease candidates to LT under controlled conditions of increased oxygen demand or hemodynamic instability. Cardio-pulmonary exercise test (CPET) might be a solution, because it simultaneously evaluates efficiency of circulatory, respiratory, and muscular systems, testing the ability of the cardio-respiratory systems to deliver oxygen to tissues under stress and provides an objective measure of functional capacity and impairment. A lower anaerobic threshold indicates lower aerobic fitness. Poor performance on CPET is associated with inferior postoperative outcomes and patients who are unable to complete CPET for some reason had the longest hospital stay and poorest survival [19]. Peak oxygen uptake (VO2 peak) below 60% predicted value was shown as a prognostic factor of 100-day liver transplant related mortality [20].

In total 98 consecutive liver cirrhotic and transplanted between Mar 2015 and Dec 2017 patients (F 23, M 75, mean age 55 ± 8 years) were enrolled into the study: 30 with HCV (F 11, M 19, mean age 55 ± 7 years), 26 with HCV complicated with HCC (F 6, M 20, mean age 58 ± 5 years) and 42 with ALD (F 6, M 36, mean age 54 ± 8 years). The mean BMI in the study group was 27 ± 4 kg/m2, MELD score 18 ± 9 points and most of patients were class B in CPC. However, in 19 (45%) individuals Child–Pugh class was C (mean 11 points). There were 15 HCV RNA negative patients of 30 (50%) with HCV cirrhosis of the liver at the moment of LT, but only 6 out of 26 (23%) in the group of HCV-HCC individuals.
In total there were 55 individuals (56%) with sarcopenia diagnosed by L3SMI: 44 (59%) men and 11 (48%) females. In the whole study group the mean L3SMI was 47 ± 10 cm2/m2: 41 ± 9 cm2/m2 in females and 49 ± 10 cm2/m2 in men. Patients with alcohol-related liver cirrhosis had the lowest L3SMI when compared to HCV and HCV-HCC subgroups (45 ± 10.3 cm2/m2 vs. 46.7 ± 10 cm2/m2 vs. 50 ± 8.9 cm2/m2; all p < 0.05).
Thirty-three individuals were unable to perform any exercise on the treadmill because of the immobilization and clinical frailty. Majority (67%) of patients unable to perform CPET were sarcopenic.
There was no significant difference between sarcopenic and non-sarcopenic patients in terms of liver failure scores, such as MELD and CPC as well as in the mortality after LT. However, there were substantial differences in MELD scores among subgroups, with the highest values in HCV individuals (23 ± 8.3 points), followed with ALD cirrhotic patients (18.4 ± points) and HCV-HCC transplanted individuals (12.5 ± 6.5 points) (all p < 0.001). Clinical data regarding sarcopenia was summarized in Table 1. Lower L3SMI correlated with lower BMI, lower VO2 peak, higher NTproBNP and correlated with prolonged ICU stay (r = −0.21, p < 0.05). Thus, sarcopenic patients presented reduced cardio-pulmonary performance and were more prone to longer stay at the ICU (Table 2).
Table 1. Comparison between patient with and without sarcopenia, defined by L3SMI.
Abbreviations: ALD, alcohol liver disease; BMI, Body Mass Index; CPC, Child–Pugh Class; HCC, hepatocellular carcinoma; MELD, Model of End Stage Liver Disease; NT-proBNP, N-terminal pro-brain natriuretic peptide; TnI, troponin I. The data are presented as median and IQR or percent of the subset, when indicated. The U-Mann test was performed to compare the subgroups. p value < 0.05 considered significant.
Table 2. Correlations between sarcopenia, cardiac markers, and clinical variables.
Abbreviations: BMI, Body Mass Index; CPC, Child–Pugh Class; L3SMI, third lumbar vertebra skeletal muscle index; MELD, Model of End Stage Liver Disease; NT-proBNP, N-terminal pro-brain natriuretic peptide; TnI, troponin I. The Spearman test was performed. p value < 0.05 considered significant. The data are presented as rho. * p < 0.05; ** p < 0.01.
Moreover, there were substantial differences between patients who performed CPET and individuals unable to perform any exercise in terms of CPC (p < 0.05) and MELD, L3SMI, NTproBNP, as well as prolonged ICU stay (all p < 0.01).
In comparison, in the Kaplan–Meier curves for patients with and without sarcopenia, no significant differences were reported in terms of survival in 90-day post-LT (Figure 1), as well as 1 year (Figure 2) and whole follow-up period (up to 1224 days after surgery) (Figure 3). 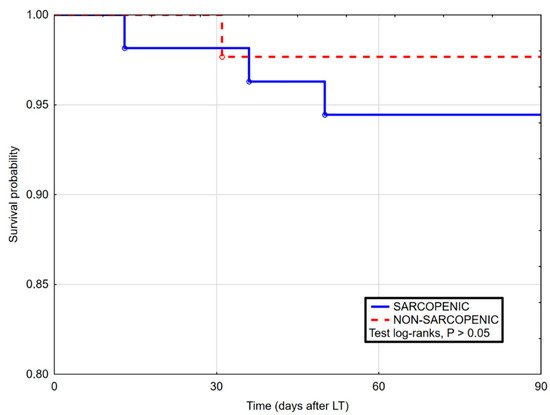 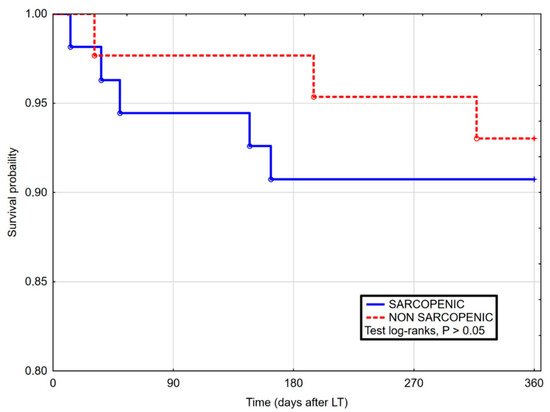 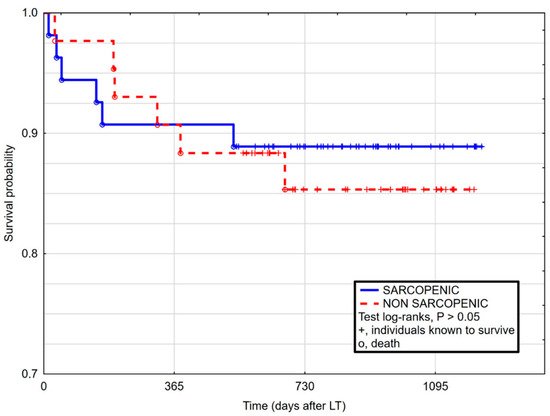 It is pointed out that the high number of sarcopenic patients awaiting liver transplantation with correlation between sarcopenia and prolonged ICU stay after LT but not with mortality. More than half of evaluated individuals in analyzed cohort presented sarcopenia. Sarcopenia seemed to be a derivative of alcoholic cirrhosis and more advanced liver disease; both were true for males with end-stage liver disease, suggesting sex differences in this term. In ALD patients both advanced liver disease and alcohol directly contribute to sarcopenia with myosteatosis reaching 68% in sarcopenic patients [21]. Alcohol impairs skeletal muscle mitochondrial function and protein synthesis [22], leads to hypogonadism and its effect on muscle [23][24] It inhibits mammalian target of rapamycin complex 1 which role is suppressing autophagy and stimulating protein synthesis [25]. Moreover, end-stage liver disease of alcoholic origin was associated with loss of muscle and fat mass as described by Benjamin et al. [26]. This alteration in body composition accompanied the progression from compensated to decompensated liver cirrhosis. [26]. There was no correlation between sarcopenia and advanced liver impairment in the present study. This finding was in line with data of Kang S.H. et al., who found that MELD was not an independent predictor of mortality in severe sarcopenia in the study with 452 cirrhotic patients [27] and pointed out the role of novel MELD-sarcopenia score [28]. On the other hand, the additional value of MELD-sarcopenia index in allocation of organ system was questioned by van Vugt et al. [29].
The universal structured cardiologic protocol applied in liver transplant centers is dedicated mainly for detection of coronary artery disease and its complications. Of note, dobutamine-stress echo is not a standard of cardiac evaluation to LT across the centers. Disadvantages of such strategy is associated with the lack of assessment of heart function during surgery with increased oxygen demand as well as in hemodynamic instability. The novel aspect of presented analysis is the impact of sarcopenia on worse cardio-pulmonary performance, i.e., lower VO2 peak and higher NTproBNP before surgery. These results corroborate previously published data regarding the impact of aerobic capacity on LT prognosis [20][30]. Reduced VO2 peak has been independently associated with 100-day mortality following LT [20]. Liver transplant candidates with greater VO2 peak experienced significantly better 12-month survival after surgery [31]. Moreover, VO2 at ventilatory threshold was the only predictive factor of mortality after LT [30]. A reduction in aerobic power or aerobic endurance correlated with increased mortality [31][32], and might be a more sensitive predictor of mortality than sarcopenia alone, pointed rather to the muscle function, i.e., chronic immobilization, than mass [33].
What is more, we also found higher levels of plasma NTproBNP in sarcopenic individuals, supporting the thesis of impaired heart function in terms of reduced muscle mass and strength, as well as mirrored data regarding the reverse impact of higher body mass index on this cardiac biomarker [34][35]. NTproBNP is an independent risk factor of all-cause mortality in patients without heart failure [36]. Moreover, newly established cardiac cachexia of multifactorial origin—including endotoxemia, chronic inflammation, long-term neurohormonal overactivation, and upregulation of the transcription the proteolytic ubiquitin–proteasome pathway components—has been described, with only NTproBNP recommended to diagnose this condition as of the date [37].
Thus, the novel aspect of this analysis is the impact of sarcopenia on worse cardiac performance before surgery with the higher risk of prolonged ICU stay with its further complications after LT in sarcopenic individuals unable to perform any exercise on the treadmill. The population of LT candidates unable to perform an objective CPET should be of interest in planning early recognition, testing and management of sarcopenia and muscle function. As of date, there were no studies analyzing sarcopenia regarding an individual’s cardiopulmonary performance [38].
In conclusion, the results of the present study are in line with the previously published data linking sarcopenic patients with worse cardiopulmonary assessment result and prolonged ICU stay after LT. The urgent need for early identification and appropriate cardiac testing of sarcopenic LT candidates exists. CPET might be a solution, however only in individuals capable of effort on treadmill. Therefore, there is an unresolved problem with evaluation of immobilized or frailty liver transplant candidates. The population of LT candidates unable to perform an objective CPET should be of interest in planning early recognition, testing, and management of sarcopenia and muscle function.