Submitted Successfully!
Thank you for your contribution! You can also upload a video entry related to this topic through the link below:
https://encyclopedia.pub/user/video_add?id=12839
Check Note
2000/2000
Improving Consistency of Photobiomodulation Therapy
Edit
Upload a video
This entry is adapted from 10.3390/ijms22157788

One of the molecular mechanisms for this treatment implicates the mitochondrial enzyme, cytochrome C oxidase. However, the efficacy and consistency of clinical outcomes with photobiomodulation treatments has been fiercely debated. This work was motivated by this need to improve photobiomodulation devices and delivery approaches.

The ability of visible and near-infrared light (NIR) to influence body healing has been described by several ancient civilizations [1]. The first scientific description by Prof. Endre Mester about fifty years ago outlined the effects of low dose laser interaction with tissues describing the non-thermal therapeutic benefits of biophotonics energy [2][3][4]. Since then, growing evidence has demonstrated that visible and near-infrared light can modulate metabolism in various life forms, from bacteria and protozoa to animals and humans [5]. While all life forms need energy for survival, unlike plant-cell, the animal cell does not appear to directly employ light as a metabolic source of energy [6].
A major site for light interaction has been noted to involve the mitochondria [7]. These interactions can result via direct interaction of cytochromes belonging to the respiratory chain. Alternatively, they can indirectly impact biophysical properties of water, lipids and voltage-gated ion channels as well as changes in calcium homeostasis and membrane fluidity [7][8][9]. In other words, the photon can transfer its energy to the photoacceptor in the mitochondria that leads to an electronically excited state and production of energy substrates such as ATP [10][11]. Thus, this ability to modulate the cellular metabolism and functions via non-ionizing and non-thermal light treatments is termed photobiomodulation (PBM) therapy; popularly termed low-level light/laser therapy or cold laser treatments.
There has been significant recent progress in our understanding of PBM mechanisms, extending beyond the initial effects on the mitochondria to cell membrane receptors and ion transporters as well as an extracellular growth factor, TGF-β1 [12]. However, the standardization and the repeatability of the photobiomodulation process is currently under debate [1][8][9][10][12][13][14]. Two major parameters that can influence this have been identified. First, the variation in tissue optical properties such as scattering due to their microstructure, wavelength-dependent absorption of photon-energy, skin colour and thickness affects the transmittance and reflectance of laser light [15][16][17]. These parameters are not assessed directly in vitro lab studies. Therefore, a coherent translation of the results from in vitro to clinical patients is limited. Second, the photobiomodulation parameters do not directly correlate with precise light and cellular photoacceptor interaction. These can drastically vary with even small changes in the photon-energy delivered [10].
Hanna et al., [18] recently demonstrated that by moving the hand-piece from contact to many centimetres away from the target, the treatment power varies with the use of a standard gaussian hand-piece with respect to a flat-top beam delivery system. The same authors also reported improved cell growth and differentiation with treatments using the flat-top hand-piece than the standard probe. They attributed this response to the more homogenous power distribution within the treatment area through the flat-top probe. However, this has not yet been experimentally demonstrated. This study was designed to address this issue. We examined the beam profiles of a novel hand-piece with a flat-top beam profile compared to a standard hand-piece and fibre probe. Next, we investigated the effects of the three probes on isolated mitochondria by assessing ATP generation in various areas of the laser beam, namely in the centre and at the edges on either side. Finally, we also examined the effects of various treatment doses with the three probes on potential mitochondrial damage.

2. Characterization of the Probes Beam Profile and Irradiation

Figure 4. Schematic representation of the laser beam profile (A–C) and the drop’s area irradiated by the power density of 1 W/cm2, green colour, (A’–C’) Image created with BioRender.com.
According to Hanna et al. [18] and also in our experimental set-up, the irradiation with the flat-top hand-piece keeps power constant in contact mode and at 2 cm from the target (1.03 ± 0.02 W vs. 1.01 ± 0.03 W; p > 0.05). Irradiation with fibre or the standard hand-piece experienced a statistically significant decrease of 0.23 and 0.22 W, p < 0.05. A statistically significant increment of the drop temperature was observed after irradiation (~2.1 °C), but the thermal increase was similar with the three probes (p > 0.05). 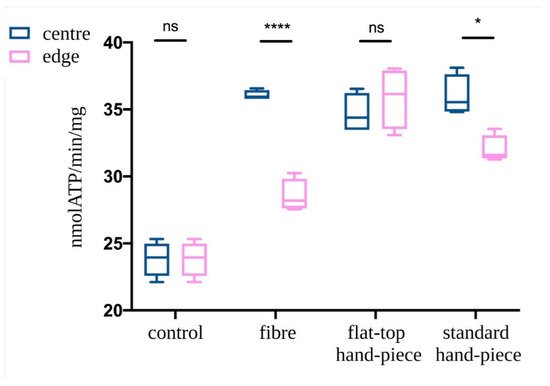 Figure 5. Effect of the photobiomodulation on mitochondrial ATP synthase activity. The isolated mitochondria were placed at the centre or edges of the laser treatment spot (1 cm2) and the treatments were performed using a fibre, flat-top hand-piece or a standard hand-piece. All samples were treated with PBM 808 nm laser in continuous wave mode with 1 W, 1 W/cm2, 60 J and 60 J/cm2 for 60 s. Untreated control samples were placed in a similar set-up with laser at 0 W for 60 s. Data are expressed as mean ± SD. A significant difference between the ATP production of the mitochondria in the centre vs. the edge is indicated by the symbol * and ****, respectively p < 0.05 and 0.0001, ns indicates a no-significant difference.

Photobiomodulation involves changes in cellular metabolism through the transfer of energy from photons to its photoacceptors [7]. The pivotal role of mitochondria in the translation of biophotonic energy to biochemical changes has been previously demonstrated [10][19][20][21][22][23]. However, the rigour of the photobiomodulation clinical outcomes has been questioned. The device technology used for photobiomodulation delivery plays a critical role in improving treatment standardization [24]. Indeed, our data point out that power density delivery is affected by the probes used for these treatments. In this study, we noted that despite both the fibre and standard hand-piece delivering the correct power density, only a surface area less than 50% of the laser spot size was effectively illuminated. Further, the distribution of the different power densities on the treatment spot size was more non-uniform for the fibre compared to a standard hand-piece. Strikingly, flat-top prototype delivered the most consistent power distribution over 90% of the treatment area. Furthermore, the flat-top hand-piece was able to maintain constant power from contact to a couple of centimetres away allowing for improved clinical consistency during PBM treatment delivery as previously reported by Hanna et al. [18]. This evidence supports the notion that the effectiveness of photobiomodulation therapy could be significantly influenced by both the probes employed and the delivery technique of the operator. The significant improvement in mitochondrial activity with the flat-top hand-piece prototype demonstrated a homogenous treatment spot size in the centre and on either sides. This contrasted with the significant differences in the fibre and standard hand-piece groups indicating that the biological responses were most uniformly achieved with the current flat-top prototype. Improvements in the laser device, fibre and collimating procedure with the lens and probe design could further significantly improve the rigour and consistency of PBM clinical treatments.
As noted in our previous work, PBM responses involve complex events resulting from the absorption and scattering of the photons and the generation of an electromagnetic field [25]. This work was based on three-dimensional modelling of photon waves interacting within the mitochondrial droplet generated between the laser to the coverslip. The differences in the beam power density distribution during treatment with the three probes may impact these interactions affecting the overall photobiomodulation responses. Additionally, recent work from our group observed a limited dose range of a 980 nm diode laser, which affects the complexes III and IV as well as ATP production and oxygen consumption of mitochondria [10]. Slight variations (0.1 W) in the treatment power appeared to drastically modulate the photobiomodulation outcomes. Basically, 0.8–1.1 W kept mitochondria coupled and induced increments of ATP production by increments of complex III and IV activities. In contrast, 0.1–0.2 W uncoupled the mitochondria and had an inhibitory effect of ATP synthesis and increment of oxidative stress, while 0.3–0.7 and 1.2–1.4 W did not appear to affect these responses. These data suggest a major limitation in the reproducibility of photobiomodulation responses lie in a non-homogeneous distribution of the laser energy. Variations in an area of only 1 cm2 appeared to induce drastically different photobiomodulatory responses (positive, null or negative) in these in vitro studies. Therefore, we would expect significant differences in groups of neighbouring cells and overall tissues when this therapy is used in clinical in vivo scenarios.
This work has some strengths and limitations. A single spot size of 1.13 cm in diameter was used allowing for a limited drop volume of isolated mitochondria sufficient to assess ATP. Further reduction of the drop diameter or an increment of the laser spot-size as well as reducing treatment power could highlight further, perhaps more dramatic, differences. However, the use of three-dimensional dose modelling [25], the temperature monitoring during treatments [10], the standardised ATP synthesis evaluation of treated mitochondria [10][19][20] and the careful assessment of the treatment power at the target surface with a power meter [18], enabled comparisons of the three discrete probe designs and were clear strengths.

To summarize, our data demonstrated that the fibre, standard hand-piece and the flat-top hand-piece prototype have different beam energy distribution features. These differences significantly affected our primary endpoint, which was mitochondria activity with respect to their position in the treatment spot size. Our second endpoint showed that even at a power of 1 W, there was no damage to mitochondrial function. These results provide evidence that flat-top hand-piece allows improved photobiomodulation treatment reproducibility, especially in clinical scenarios where the distance from the target surface may vary during treatments and the wide affected area needs uniform irradiation to better experience the photobiomodulation effects.