Submitted Successfully!
Thank you for your contribution! You can also upload a video entry related to this topic through the link below:
https://encyclopedia.pub/user/video_add?id=12611
Check Note
2000/2000
Prosopis Species in South Africa
Edit
This entry is adapted from 10.3390/su13137369

The infestation of invasive plants such as Prosopis species does not only affect the groundwater levels but also threatens the grazing capacity and species richness of most of the semi-arid areas around South Africa. Though Prosopis is invasive, it is however of good nutritive value and can serve as an alternative source of protein and minerals for livestock during the dry season. Bush encroachment by browsable invasive species can be controlled through biological methods by using organisms such as livestock.

The genus Prosopis has several species and hybrids, and in South Africa, the dominant ones are Prosopis glandulosa (Honey mesquite) and Prosopis velutina (Velvet mesquite) [1]. The Prosopis species were initially introduced to South Africa from South, Central, and North America in the late 1880s, mainly to provide fodder (pods in drought years), shade for livestock, windbreak, wood for fuel, timber for furniture, and a nectar source for honey production [2][3][4][5]. The plant was of great value to all stakeholders until the 1960s [6][7], before its negative invasive impact on ecosystem services, biodiversity, and local people’s livelihoods was observed [8][9]. The species has invaded arid and semi-arid parts of Southern Africa, as well as other parts of the world [10]. The high invasive capacity is derived from its vigorous growth and high seed production and efficient dispersal mechanism, while the absence of natural seed-eating insects preserves the seed for extended periods [11]. Other than overwhelming the grazing land, devouring excessive amounts of groundwater, and reducing biodiversity, Prosopis is a very noxious invader, with areas of high infestation resulting in surrounding indigenous plants failing to deliver valuable ecosystem services for that ecological niche [12].

Besides its invasive problem, Prosopis still provides some nutritional benefits to livestock [13], and therefore, any control programme should not ignore its contribution to the smallholder livestock farmers in semi-arid areas. Furthermore, beneficial ecosystem services such as the reduction of soil erosion are obtained from this invasive plant [14].

2. The Expansion of Invasive Species

Shackleton et al. [15] highlighted that even though some of these invasive species can be beneficial, there are some detrimental aspects that can create vulnerability in social–ecological systems. The detrimental and beneficial aspects of Prosopis invasive plant species on a widespread extent, especially on livestock and underground water, have been reported in numerous locations of the world [16][17][18]. Hence, the invasive woody alien plant species, as non-native organisms that increase from the point of introduction and become much more abundant, have a great potential to cause harm to the environment, as they are the key drivers of environmental change, disrupting ecosystem functioning, being detrimental to grazing lands, and tending to threaten the native biological diversity (being the main causes of biodiversity losses around the world), economics, and human and animal health [9][19][20][21][22].

In South Africa, three different Prosopis plant species were introduced from North, South, and Central America in the last 1800s, namely, P. glandulosa, P. chilensi, and P. velutina (Figure 1) [23]. The study of Visser [1] reported that of the above-mentioned species, as well as their crossbreeds, there are only two species that prosper in South African environmental conditions, specifically Prosopis velutina and Prosopis glandulosa var. torreyana. 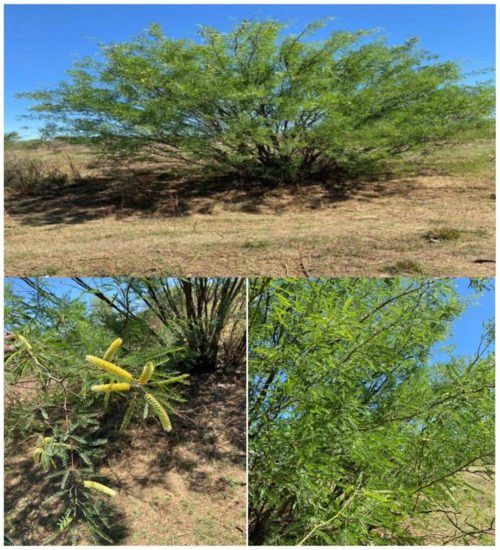 4. The Habitat of Prosopis Species around South Africa

The genus has invaded several hectares of the western half of South Africa, forming extensive and impenetrable thickets over vast areas [24][25]. The study of Nel et al. [26] reported that numerous plant species have amplified their ranges within the past few centuries due to human activities.

It is estimated that the spreading rate of Prosopis species in South Africa ranges from 18 to 40% per annum [18]. Van den Berg [27] stated that once the Prosopis species have set up in rangeland, the density of the infestations rapidly spreads at yearly rates of 3–10%. In the Northern Cape, Van den Berg [27] showed that the average annual rate of spread of Prosopis is very high, being approximately 15% in upland areas and up to 30% in riparian areas. Several estimations of provinces invaded with Prosopis species have been made over the decades [24][25]. With the use of biome-based procedures when ranking invasive plant species in South Africa [28], Robertson [29] stated that in South Africa, Prosopis plant species were ranked the second species in the Nama-Karoo biome and the third in the Succulent Karoo biome. Martin [30] reported that Prosopis seed may last a long time and may gain in mass over time to sizeable seed storage, which can endure for a minimum of 20 years without deteriorating. As per the study of Roberts [31], the measure of seed storage in South Africa changes over the distributional range of Prosopis species and is influenced by the existence or non-existence of animals, with accumulations of as numerous as 2500 seeds/m2 in some few regions.

Several authors highlighted the adaptability of this species in dry areas with more saline soils unsuitable for cultivation [10][32][33]. For example, Lauenstein et al. [34] stated that Prosopis species, especially flexuosa, grow and develop in a broader range in the flatlands where there is no additional water contribution. This could be linked to moderate plasticity at physiological and xylem anatomical levels and a positive absolute value in key drought tolerance characteristics. According to Villagra et al. [35], some of these species can survive the desert steppe with extremely severe low temperatures during winter times. Prosopis species have a defence mechanism or a system against drought strain, which involves alterations in gas exchange, stomata opening, osmotic adjustment, and leaf area [36]. Prosopis species are extremely tolerating salt [37], e.g., P. juliflora, P. tamarugo, P. laevigata, P. alba, and P. pallida, and can grow in saline soil regimes comparable to seawater [38][39][40].

The negative effects of Prosopis invasions to the environment and biodiversity include the reduction in plant species richness, density, and diversity in arid areas [41], as well as increased local tree mortality due to increased competition for water, nutrients, and land with existing local vegetation [16][20][42][43][44]. The ecosystem activities, i.e., water supply, soil quality, and grazing areas, have been negatively impacted by Prosopis invasions, resulting in a range of negative results for native farmers [18][45][46][47].

7. Prosopis as an Invasive Species

According to Pasiecznik [10], several key factors that are favourable for invasive species to dominate over the area include climate change, land-use changes, and competitive ecological advantages. For instance, in South Africa, the widespread occurrence of Prosopis invasive plant species takes place mostly in the areas where there is a scant herbaceous layer available and where the conditions for establishment and germination are favourable [4][48]. According to Harding [49], seed production is predicted at 600,000 to 1,000,000 seeds per mature tree each year. It was highlighted that those seeds are most likely to sprout when they are scoured, as they pass throughout the digestive tract and are released into the humid faeces of ruminants [50].

8.1. Prosopis as a Feed Source for Livestock Production

Prosopis pods play a great beneficiary role in livestock production, society, and the general economies in arid areas [51]. Several uses have been reported over the years for Prosopis plant species such as animal feed [52][53][54], due to their high carbohydrate and protein content and their bioactivities, along with their medicinal properties [55][56][57][58][59][60]. Due to their higher nutritive value than pasture, the pods and leaves of Prosopis species are very edible and are consumed voluntarily by goats, sheep, camels, and cattle. Pods can also be fed to monogastric animals as well [10].

Various reports are highlighting that Prosopis species have provided treatments for several years, treating various ailments [61][62][63]. Over many years, the plant species have been utilised for traditional medicines, usually using their pods, leaves, roots, and seeds for treating various maladies [64][65]. In South Africa, Prosopis pods have been utilised to stabilise blood sugar levels in humans as an indigenous medicine (manna) [66]. Bioactive compounds found in Prosopis species play a substantial role in indigenous medical systems [67][68]. Technically, the plant species has a vast history in medical practices and its versatile uses in local areas [69][70].

Ehsen [71] stated that anti-nutritional factors (ANFs) are secondary plant metabolites and are considered to be biologically active substances. The fruits, seed, and other plant parts produce these substances [72][73]. A study conducted by Anhwange et al. [74] revealed that Prosopis species contain ANFs, i.e., saponins, alkaloids, tannins, and oxalates, in varying quantities. The utility of Prosopis species is limited as animal feed by the existence of ANFs. According to Aganga and Tswenyane [73], ANFs reduce livestock productivity, but they can cause toxicity or confinement if animals eat large amounts of feed rich in these substances.

10. Livestock as a Tool to Control Invasive Species

In the African continent and other continents, usage of livestock to manage invasive species has been fundamentally limited to world grasslands, where this technique has been met with diverse success [75][77]. Although small stock alone as a treatment cannot successfully eradicate invasive species, few authors have documented the use of goats. Mayo [78] used goats to control Sericea lespedeza, and a reduction in seed production was witnessed. Results by Rathfon et al. [79] suggested that goats give an effective and environmentally friendly method to control invasive species.

The control of invasive alien species is based on their contribution to the ecosystem and also on the negative impact associated with the species. For the development of better control, approaches, well-trained personnel, and knowledge of the species and the spreading process are very important. As far as Prosopis is concerned, their nutritive value to livestock makes it a valuable component of the rangelands for resource-constrained communal farmers. It is therefore important to develop utilisation strategies that consider the effective age or stage of development for the maximum control of spread and are also of benefit to ruminants. Therefore, managing the spread of these invasive species can be accomplished by the use of livestock as biological control while improving the productivity of ruminant animals. There is also a need to balance its use as a protein supplement and its negative impact on herbaceous biomass production. Additional control strategies such as physical ones can be applied to reduce the number of Prosopis plants to a level where optimum herbaceous biomass for livestock production can be achieved and the potential impact on soil erosion is minimised. Hence, these invasive Prosopis species control will assist in maximising the grazing capacity while maintaining the species diversity in arid and semi-arid environments.