Submitted Successfully!
Thank you for your contribution! You can also upload a video entry related to this topic through the link below:
https://encyclopedia.pub/user/video_add?id=12420
Check Note
2000/2000
TP53 in Germ Cell Tumours
Edit
This entry is adapted from 10.3390/ijms22137160

The cure rate of germ cell tumours (GCTs) has significantly increased from the late 1970s since the introduction of cisplatin-based therapy. The exquisite cisplatin sensitivity has been mainly explained by the over-expression in GCTs of wild-type TP53 protein and the lack of TP53 somatic mutations; however, several other mechanisms seem to be involved, many of which remain still elusive. The findings about the role of TP53 in platinum-sensitivity and resistance, as well as the reported evidence of second cancers (SCs) in GCT patients treated only with surgery, suggesting a spectrum of cancer predisposing syndromes, highlight the need for a deepened understanding of the role of TP53 in GCTs.

Testicular germ cell tumours (TGCTs) are the most prevalent solid tumours in young men aged 15–35 years, with a rising incidence among Caucasians, although they represent overall 1% of all malignancies in men worldwide [1]. It has been estimated that 23,000 new cases of TGCT in Europe will be diagnosed each year by 2025, with an increase of 24% compared with 2005 [2]. The most reassuring data are that TGCT is one of the most curable solid cancers, with approximately 95% of men surviving at 5 years [3]. This percentage rises to 98–99% for patients diagnosed with clinical stage I (CSI) [4]. The cure rate has significantly increased from the late 1970s since the introduction of cisplatin-based therapy in the [5][6], which to date remains the milestone of germ cell tumours (GCTs) treatment. The exquisite cisplatin sensitivity has been for a long time mainly explained by the over-expression of wild-type TP53 protein and the lack of TP53 somatic mutations; however, several other mechanisms seem to be involved, many of which remain still elusive [7]. Nevertheless, approximately 10–15% of patients will develop a tumour relapse after initial treatment or a refractory disease [8] and non-seminomas, particularly those of extra-gonadal origin, are associated with a lower rate of platinum responses [9][10]. In recent years, these issues have boosted the question of platinum resistance in GCTs, which represents an ongoing unmet clinical need [11]. Another urgent issue, still not completely clarified and a direct consequence of cisplatin-related survival increase, is represented by the incidence of second malignancies in GCTs survivors [12]. As consequence, national prevention and long-term follow-up policies for survivors have been promptly promoted worldwide [13].

Mutations/losses of the tumour-suppressor TP53 and amplification/gains of its regulator, MDM2, as well as WNT/CTNNB1 pathway aberrations, which are involved in developmental processes and stemness, have been deeply investigated in platinum-resistant and metastatic disease. As already acknowledged, one of the hallmarks of GCTs is the presence of wild-type (WT) tp53 in most patients, although mutations in tp53 have been described in a few cases in the past [14] and more recently in a small subset (~7–15%) of cisplatin-resistant or relapsed GCT patients [15][16]. Activity of TP53 is regulated by the E3 ubiquitin ligase MDM2, which inhibits transcription of target genes by TP53 within direct binding to the transactivation domain of TP53 and through targeting TP53 for proteasome degradation by ubiquitination [17][18]. In physiological conditions, MDM2, through an auto-regulatory negative feedback, keeps TP53 levels low. Genomic alterations affecting both TP53 and MDM2 have been described in resistant GCTs [19]. A large study assessed 180 GCTs using whole exome sequencing, identifying MDM2/TP53 alterations exclusively in cisplatin-resistant tumours [16]. Notably, mutually exclusive TP53/MDM2 alterations were significantly more frequent among patients with unfavourable clinical characteristics, according to the IGCCCG poor-risk group [20] and having a mediastinal non-seminoma primary tumour site. The majority of MDM2 amplifications were observed in post-treatment samples, suggesting that tumour cells are selected during treatment [16]. Since tp53 mutations are rare, MDM2 amplification is a possible selection mechanism to prevent cell cycle arrest and DNA repair during the progression of disease. This hypothesis is reinforced by functional studies within cisplatin-sensitive and resistant testis cancer cell lines, indicating that the interaction between TP53 and MDM2 needed higher doses of cisplatin to be disrupted in resistant ones [21]. As previously reported, although most GCTs express WT TP53, posttranscriptional modifications are able to suppress the pro-apoptotic activity of TP53. For example, lysine methylation at the carboxyl terminus of TP53 represses its transcriptional activity, as demonstrated by reduced expression of PUMA and p21 in TC cells [22]. Furthermore, the expression of miR-372 and miR-373 was reported to block TP53 signalling, and their elevated expression levels have been detected in cisplatin-resistant GCT cell lines [23][24][25]. Another posttranslational modification is represented by deacetylation of TP53 by SIRT1, which may potentially repress TP53 activity in TGCT, suggesting that SIRT1 acts as an oncogene. However, the exact role of SIRT1 impacting TP53 activity in the context of TGCT has not be yet completely clarified since it has been reported as upregulated in various malignancies and acting as a tumour suppressor in other reports [26]. Moreover, the extrinsic apoptosis pathway via the interaction between FAS and FAS ligand is also activated by cisplatin, which increases expression of the FAS death receptor, a transcriptional target of TP53 [21][27]. Other studies presented the use of cisplatin results in an increased expression of pro-apoptotic proteins PUMA and NOXA, which are involved in the intrinsic apoptosis pathway [28][29][30]. Additionally, high protein levels of the pluripotency factor OCT4, typical for the embryonal carcinoma histotype, are associated with a high expression of NOXA, while OCT4 knockdown resulted in NOXA decrease [30]. Notably, high NOXA expression has been linked to TGCT, with good prognosis and embryonal carcinoma histology [31]. Crosstalk between the extrinsic and intrinsic apoptosis pathways, where FAS receptor activation results in caspase-8-mediated cleavage of BID, may further reinforce the apoptotic response. In a comprehensive genomic study, Taylor-Weiner et al. showed that primary TGCTs are uniformly wild type for TP53 and, by functional measurement of apoptotic signalling (BH3 profiling), they have demonstrated high mitochondrial priming that facilitates chemotherapy-induced apoptosis [32]. (Figure 1). 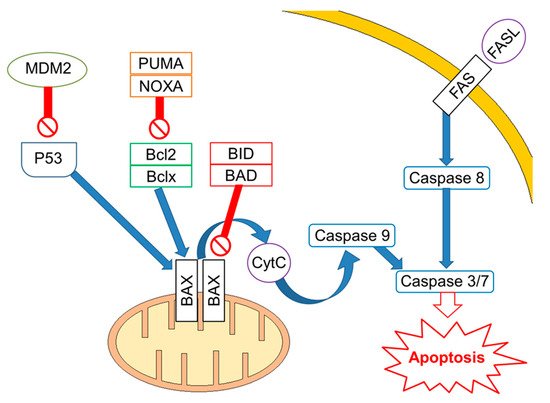 Figure 1. Apoptotic signalling in cisplatin-sensitive Germ Cell Tumours. Apoptosis is regulated at several levels with a key role for TP53, which transcriptionally regulates proteins involved in both the extrinsic and intrinsic apoptosis pathway, including FAS death receptor, BAX, PUMA, and NOXA. Activated TP53 enhances expression of the FAS death receptor. Binding of FAS ligand to FAS death receptor leads to cleavage of procaspase-8 and subsequently activates a caspase cascade leading to apoptosis. The intrinsic apoptosis pathway is regulated by pro- and anti-apoptotic proteins. Pro-apoptotic proteins directly facilitate BAX and BAK oligomerization in the mitochondrial outer membrane, or they indirectly inhibit anti-apoptotic proteins. Crosstalk between the extrinsic and intrinsic apoptosis pathways exists in form of caspase-8-mediated cleavage of BID.

Since the elevated risk of thyroid cancer (TC), reported for the surgery only group in the study by Hellesnes et al. [33], is a novel finding that needs to be further investigated, we carried on a database search of TGCT patients, referred to the Rare Tumors Reference Center of Campania Region between 2000 and 2019, who received a TC diagnosis. Finally, we identified two patients, who received a diagnosis of TGCT and metachronous TC (Figure 2 and Figure 3). Both patients had no family cancer history that was suspicious for hereditary cancer predisposing syndrome or professional exposure. The first patient had a history of metachronous bilateral stage I seminoma, managed with surveillance (surgery only) and a subsequent diagnosis of papillary thyroid cancer (PTC), 6 years from the first TGCT diagnosis and 1 year after the second one (Figure 2). The second patient had a history of left cryptorchidism and a diagnosis of stage I right-sided seminoma treated with radiotherapy in an adjuvant setting. He received a diagnosis of follicular thyroid cancer (FTC) 5 years after the end of treatment (Figure 3). Both patients are still alive and free of disease relapse (clinical details are reported in Figure 2 and Figure 3). Biopsy tissue samples of TGCT, TC, and, for the first case, also tissue sample from neck lymph node, were collected and analysed for somatic mutation analysis (Methods section is provided in the supplementary). At the time of this analysis, both patients, in absence of a suspicious cancer family history, refused germ-line testing. 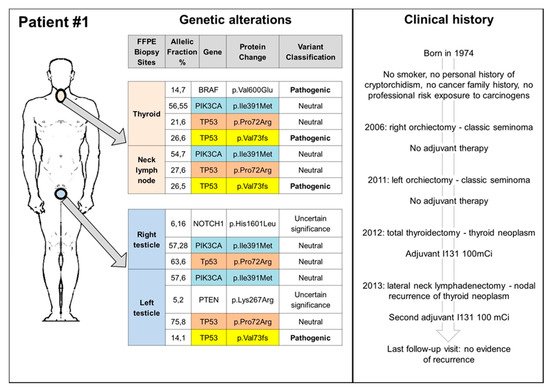 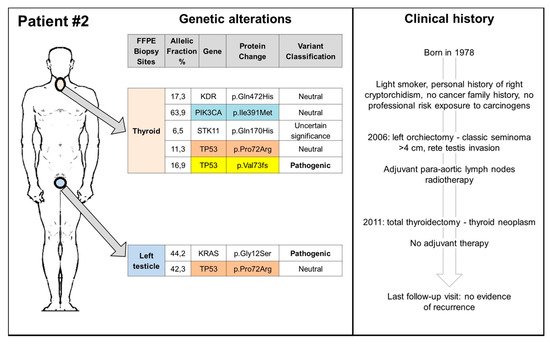 Figure 3. Clinical history and somatic genetic alterations of patient 2. FFPE: Formalin-Fixed Paraffin-Embedded.
We identified several genetic variants in both types of tumours, some of them neutral or of uncertain significance, as well as three pathogenic mutations confirmed by pyrosequencing in the BRAF, KRAS, and TP53 genes. Figure 2 and Figure 3 summarize the genetic alterations found in our cases. The BRAF V600E mutation was detected in the thyroid tumour of patient 1, while the KRAS G12S in the testicular seminoma of patient 2. The most common neutral/uncertain mutations detected involved the TP53 and PIC3CA genes in both thyroid and testicular cancers. The c.216delC pathogenic mutation, located in coding exon 3 of the TP53 gene, results from a deletion of one nucleotide at nucleotide position 216, causing a translational frameshift with a predicted alternate stop codon (p.V73Wfs*50). This alteration is expected to result in loss of function by premature protein truncation or nonsense-mediated mRNA decay. As such, this alteration is interpreted as a disease-causing mutation and has been found in thyroid, node, and left testicular cancers of patient 1 and in TC of patient 2.

Somatic mutations of TP53 are very rare in TGCTs, different from other malignancies, and when present they may notably impact prognosis and chemotherapy sensitivity. The potential role of TP53 in the diagnosis of SCs in TGCT survivorship needs to be further and more deeply investigated in the light of our preliminary findings. The identification of TP53 germ-line mutation carriers could be of substantial clinical importance, raising serious questions about appropriate methods of cancer surveillance and counselling for these persons.
Oncologists who follow up patients with a previous diagnosis of TGCT should always keep in mind the potential risk for a second primary TC, independent of the delivered treatments, since SCs may arise also in patients who were treated only with surgery.

More
© Text is available under the terms and conditions of the Creative Commons Attribution (CC BY) license (http://creativecommons.org/licenses/by/4.0/)
Upload a video for this entry
Information
Subjects: Biology ; Oncology
Contributor MDPI registered users' name will be linked to their SciProfiles pages. To register with us, please refer to https://encyclopedia.pub/register :
Ursula Vogl
View Times: 52
Revisions: 2 times (View History)
Update Time: 27 Jul 2021
Table of Contents
1000/1000
Hot Most Recent