Submitted Successfully!
Thank you for your contribution! You can also upload a video entry related to this topic through the link below:
https://encyclopedia.pub/user/video_add?id=12338
Check Note
2000/2000
Hepatocrinology
Edit
Upload a video
This entry is adapted from 10.3390/medsci9020039

Hepatocrinology is defined as the bidirectional, complex relationship between hepatic and endocrine physiology and dysfunctions. The scope of hepatocrinology includes conditions of varied etiology (metabolic, infectious, autoimmune, and invasive) that we term as hepato-endocrine syndromes.

The subject ‘hepatocrinology’ is the field of medicine that studies the bidirectional relationship between hepatic and endocrine physiology, as well as dysfunction. The hepato-insular axis is a part of hepatocrine physiology [1]. Endocrine manifestations of liver insufficiency (cirrhosis) and malignancy, and hepatic complications of various endocrine disorders are included. The possible hepatotropic effect of endocrine drugs, pleiotropic endocrine consequences of medicines used in the management of liver disease, and potential exaptation of endocrine agents for use in hepatology form part of this science.

2. The Liver as an Endocrine Organ

The liver secretes various hormones, which mediate glucose metabolism, blood pressure, growth, and hemorheological homeostasis. These include insulin-like growth factor (IGF)-1, betatrophin, and irisin, all of which mediate insulin sensitivity [2][3]. Angiotensinogen, produced by the liver, is the bedrock of the renin-angiotensin-aldosterone system, which contributes to blood pressure maintenance [4]. Hepcidin and thrombopoietin contribute to the regulation of iron metabolism and platelet production, respectively [5][6]. The hepato-insular axis is a well-researched contributor to glucose metabolism and has been described variously as the entero-insular or adipo-hepato-insular axis [1]. There are several other hormones or their precursors that are synthesized by the liver. Some of the important products are summarized in Table 1 and detailed below.

Table 1. The liver as an endocrine organ.
IGF—insulin-like growth factor.

Many liver diseases show differential gender distribution. NAFLD is more common in men during the reproductive age group, but is more frequent in women after menopause, indicating a possible protective role of estrogen [14]. HCC occurs more commonly in men, while the risk of autoimmune liver diseases such as primary biliary cirrhosis and autoimmune hepatitis is more common in women [15]. Apart from sex hormones, differences in xenobiotics, immune function, genetic alterations, and receptor expression are presumed to drive the dichotomy [16].

The liver modulates the functioning of the endocrine system directly or indirectly in multiple ways. Liver dysfunction is thus predictably associated with various endocrine disorders. The significant anomalies have been detailed below and depicted in Figure 1. 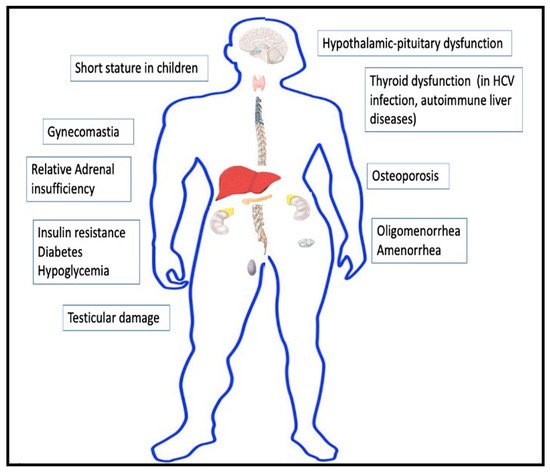 Endocrine and metabolic diseases are a common cause of hepatic dysfunction. The common endocrine causes of liver dysfunction have been depicted in Table 2. NAFLD resulting from metabolic disorders such as diabetes, obesity, and dyslipidemia has emerged as one of the leading causes of chronic liver disease over the past two decades. Several other hormonal disturbances affect the functioning of the liver directly or indirectly.

Many liver diseases show differential gender distribution. NAFLD is more common in men during the reproductive age group, but is more frequent in women after menopause, indicating a possible protective role of estrogen [14]. HCC occurs more commonly in men, while the risk of autoimmune liver diseases such as primary biliary cirrhosis and autoimmune hepatitis is more common in women [15]. Women also show higher vulnerability to alcohol-related liver diseases [26]. Apart from sex hormones, differences in xenobiotics, immune function, genetic alterations, and receptor expression are presumed to drive the dichotomy [16].

In several studies, liver enzymes have correlated with the development of incident diabetes [27]. γ-glutamyltransferase (GGT) has been proposed as a marker of oxidative stress and is associated with the future risk of diabetes. GGT levels have also been considered an indicator of hepatic fat deposition, which is related to insulin resistance [28]. In several reports, GGT and alanine aminotransferase in early pregnancy predicted the future occurrence of gestational diabetes mellitus [29][30]. Table 3 summarizes the liver enzymes which have been linked to the future development of metabolic disorders.

We have used the term “hepato-endocrine syndromes” to describe disorders with a common etiology that manifest as combined hepatic and endocrine dysfunction. The various hepato-endocrine syndromes are enumerated in Table 4. Disorders of iron and copper metabolism such as hemochromatosis and Wilson’s disease are notable examples of this syndrome [32][33]. Polyglandular autoimmune syndromes type 1 and type 2 can develop autoimmune hepatitis and primary biliary cirrhosis, respectively, as their hepatic manifestations [34]. Hepatitis C virus infection can be associated with thyroiditis and hypothyroidism [35].

The endocrine drugs can have harmful as well as beneficial effects on the liver. Both anabolic steroids and estrogens can cause cholestasis, hepatic adenoma, focal nodular hyperplasia, and other hepatic disorders [39][40]. Acute liver failure has been reported with diverse agents such as propylthiouracil (used for hyperthyroidism) and high doses of methylprednisolone [41][42]. Orlistat, a commonly used therapy for weight loss, has also been described to cause subacute and acute liver failure [43].

Spironolactone, commonly used for the management of ascites in patients with cirrhosis, is an anti-androgen which has beneficial effects in PCOS in women, but causes painful gynecomastia in males [44][45]. Interferon-alpha used for management of hepatitis C infection can result in thyroid dysfunction [46]. Beta-blockers have often been associated with erectile dysfunction [47]. Table 5 depicts the common drug interactions in hepatocrinology.

More
© Text is available under the terms and conditions of the Creative Commons Attribution (CC BY) license (http://creativecommons.org/licenses/by/4.0/)
Upload a video for this entry
Information
Subjects: Endocrinology & Metabolism
Contributor MDPI registered users' name will be linked to their SciProfiles pages. To register with us, please refer to https://encyclopedia.pub/register :
Saptarshi Bhattacharya
View Times: 95
Revisions: 4 times (View History)
Update Time: 24 Jul 2021
Table of Contents
1000/1000
Hot Most Recent