Submitted Successfully!
Thank you for your contribution! You can also upload a video entry related to this topic through the link below:
https://encyclopedia.pub/user/video_add?id=12194
Check Note
2000/2000
Orange Peel Boards
Edit
This entry is adapted from 10.3390/su13147945

The Orange Peel Board is a panel made by mixture of different proportions dried peels and wet peels. The commonly used processing method is thermo-pressing.

The construction sector represents one of the largest raw material consumers in the world with more than 42 billion tons of materials consumed in one year (WorldGBC2019). Furthermore, construction and demolition waste comprised about 25–30% of the total wastes in the EU (https://ec.europa.eu/environment/waste/construction_demolition.htm, accessed on 13 April 2021), with an estimated account of 180 million tons per year, which is more than 480 kg per person, per year [1]. It is especially noticeable in developed countries, and it became the largest in most developing ones [2]. A circular approach, in which the use of subproducts or wastes could be introduced into the construction chain, could help the building sector to reduce the environmental impact, as well as embodied energy [3].
In the search of circular economy, the use of agricultural by-products as a potential raw material for building applications has increased. Their low bulk density together with the porous structure make them suitable for this application. Based on this, different research projects have been developed in which the use of rice straw [4], rice husk [5], sugar [6], corn cob [7][8], pineapple leaves [9][10], peanut shell [11][12], coffee grounds [13], coffee chaff [14], coconut husk [15][16], sunflower [17], walnut shell [18], durian peel [19] and Opuntia [20], among others, were proposed, not only as thermal insulation material but also as acoustical absorptance [21]. Many of these products have not been commercialized on a large scale yet, but they are an alternative for the bioconstruction sector, with thermal values often comparable to commercial products. Indeed, specifically for their high sound absorption coefficients, different researches with hemp shiv, sunflower bark and pith, flax shiv and rape straw showed their potential [22].
Orange is the most widely cultivated fruit worldwide, and it accounts for about 50–60% of total citrus production. In 2016, more than 124 million tons of citrus were produced. About 50–60% of these were consumed as fresh fruit, and the remaining 40–50% were destined for industrial processing [23]. An enormous amount of waste results from this production; considering that the 50% is composed of peels, the waste produced is about 3.4 million tons. Citrus processing waste has been subjected to different valorization studies, with the aim of searching alternative use of this by-product that can increase its demand on the market and its economic value. Its use must be highlighted in composting, animal food and organic fertilizers, but also in producing biogas as well as the extraction of pectin, bioactive and essential oils [24][25][26]. However, its use in the building sector has not been found in the literature despite its potential use as thermal insulation material following previous experiences on biopolymer aerogel [27][28][29] as well as its agglomerate properties based on the high pectin contents [30].
On the other hand, due to the high energy consumption of binders, in the recent years, different studies have been developed in which thermo-compression technique of manufacturing is used [31][32]. This technique is based on the compression of a panel with two hot plates and has been used in boards with lignocellulosic fibers [33], kenaf [34], sunflower [17] and bagasse [6], among others. In those cases, the sugar residues from bagasse, the resins expelled from the sunflower and the fibers act as a natural binder for the panels’ production. This method has the advantage of avoiding the use of energy in the manufacture and the reduction of costs associated with it [3].

Wet peels were shredded with a manual mill up to achieve a particle size between 0.5 mm and 10 mm with 80% of water (Figure 2). On the contrary, dry peels were obtained by placing the orange by-product into the ventilated chamber at 40 ± 5 °C until the masses were constant. The constant mass was defined as three subsequent measurements with a difference of less than 1%. An electronic balance with a precision of 0.01 g was utilized. Subsequently, the dried material was crushing with a manual mill and was sieved to divide the granules types. 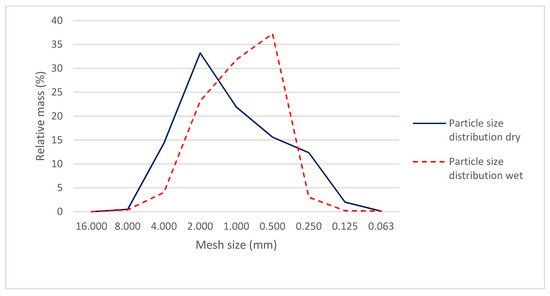 Figure 2. Particle size distribution of dried and wet orange peels.
In all the cases, particle sizes between 4 mm and 0.125 mm were used, whose granulometric curve is shown in Figure 2, which represents the highest percentages obtained from the milling. Particles larger than 4 mm (Figure 3e) and lower than 0.125 mm (Figure 3a) were discarded. 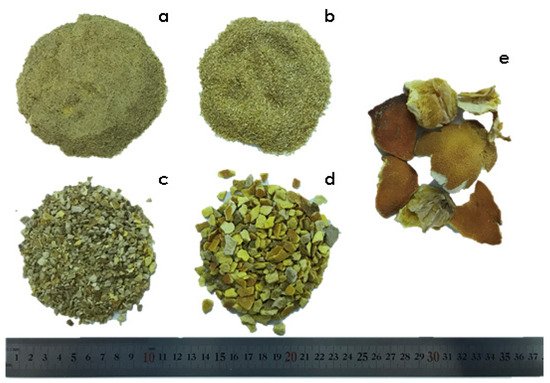 Figure 3. Particle size distribution obtained from sieving (a) s < 0.63 mm; (b) 0.63 < s < 1.25 mm; (c) 1,25 < s < 4.00 mm; (d) s > 4.00 mm; (e) dried citrus peel.
A homogeneous mixture of dry and wet material was introduced in the mold. In all the cases, the same amount of weight was introduced in order to control the amount of material. All the samples were pressed using springs that were placed in the upper part of the press. The equivalent force applied to the panel was calculated based on the reduction of the length of the springs and is about 0.003 MPa. During the drying process, the springs were periodically tightened in order to apply to the sample a constant pressure.

The springs allow keeping the pressure constant even after the volume reduction and a planar panel were obtained. Significant differences were found in the water content of the blends, and, as expected, shrinkage decreased with the addition of dried orange peels.

Compared with the literature, the samples from orange peel showed a higher thermal conductivity than other non-natural commercial insulations such as mineral wool, polystyrenes, and so on. However, the conductivity values obtained from orange peel panels are in line with the conductivity of other agro-waste insulation materials such as durian [19] and ficus indica [20]. Furthermore, the conductivity is lower than the particleboard made with corn-cob [7], sunflower [35] and walnut shell [36], and greater than the particleboard made with coconut shell [19], pineapple leaves [9], sugarcane [37] and rice straw [4].

Figure 9 showed that the incorporation of dried peels in the composition of the boards (W75) provoked a dramatic reduction of flexural strength. While W100 showed 0.09 MPa of flexural strength, it fell down to 0.02 MPa in W90 and almost kept constant in the others.

Figure 9. Flexural (a) strength and Modulus of elasticity (b) for the blends.
It can be explained by the homogeneity of the microstructure in the case of W100 compared to the blends in which dried peels were added. Furthermore, the reduction of the volume provoked in the samples with high wet peel content generates a microstructure that is denser and more continuous compared with the addition of dried peels. A discontinuity in the microstructure generated a loss of bond between the particles and a loss of strength. This performance is similar to the addition of aggregates in other studies, for example, cement with the addition of perlite [38] or plastic [39].
In any case, compared with the literature, strength is lower than other agro-waste boards with corncob [8], coconut coir [19] and sunflower [21], although similar to the bagasse ones [6]. However, the differences can be explained not only by the material itself but for the manufacturing process due to the higher compression strength in the preparation phase or even the presence of an external binder, contrary to the research.
Modulus of elasticity (MOE) followed the same pattern as the MOR (Figure 9b), and the stiffness is higher in the sample without dried peels (W100). Indeed, W100 showed a modulus of elasticity almost 10 times higher than the W75 with 34.79 N/mm2 and 3.57 N/mm2, respectively. This performance can be explained due to the formation of closed porous and homogeneity in the mixture compared to the others, observed by microscopy. In addition, Maillard reactions, caramelization, or pyrolysis of organic material [40] were expected to take place due to the brown color of the surface. The Maillard reactions from the decomposition of the sugar and amino acid could lead to interaction bonds and improve mechanical properties [41]. Indeed, as can be observed in Figure 10, the curve stress-strain showed a higher stiffness of samples W100, which is drastically reduced in the W90. It must be highlighted that the performance of W75 shows an increase in strength and could be justified by the balance between dried and wet peels in the case of W75, for which an interesting increase in strength is found.

The lowest absorption by capillarity in W100 samples was observed while the highest in W80 samples was shown (Figure 11). It justified the hypothesis about differences in porosity and pore size among blends, as well as the higher open porosity in samples W80, compared with W100. At the same time, a correlation between porosity and strength was found and could be ratified by microstructural observations in which a highest porosity was observed in the case of W75, compared with W100. The greater absorption of the W80 sample compared with the W75 can be justified by a greater distribution of the pores and therefore by a release of the water in the dripping phase before measurement.

Figure 11. Water absorption of orange peel panels after 24 h.
Furthermore, the loss of cohesion in samples with dried peels is observed when they are submitted to water absorption. Indeed, the higher amount of dried peels, the higher the crumbled and lost particles during the tests. This performance is related to the shrinkage of the boards in contact with water, and an exponential linear increase of up to 40% of the swelling was observed in samples with higher dried peels (Figure 12). The homogeneity in the structure in the case of W100 led to all the particles to absorb water in the same way; on the contrary, the W75, with particles with a different procedure, absorb differently and provoked an increase in the swelling together with the heterogeneity in the structure and the higher open porosity detected.

It is possible to produce orange peel particleboards without chemical addition. The use of wet or dry particles notably influenced the performance of the boards. The highest thermal conductivity was achieved by W75 for which the flexural strength was 63% lower than W100. However, the optimum composition for this application is found in the board W100 (100% of wet orange peels) for which the thermal conductivity is 0.065 W/mK. Furthermore, their performance in terms of mechanical and physical tests is the most suitable for the application. In this case, the caramelization of the sample induced higher compactness and homogeneity in the structure [42][43].
In spite of the interest of the boards, the main drawback could be the durability, so long-term tests are required to evaluate the degradation of the samples.