Submitted Successfully!
Thank you for your contribution! You can also upload a video entry related to this topic through the link below:
https://encyclopedia.pub/user/video_add?id=11946
Check Note
2000/2000
CaFtsH06
Edit
Upload a video
This entry is adapted from 10.3390/ijms22136953

we examined the transcriptional regulation of the CaFtsH06 gene in the R9 thermo-tolerant pepper (Capsicum annuum L.) line. The results of qRT-PCR revealed that CaFtsH06 expression was rapidly induced by abiotic stress treatments, including heat, salt, and drought. The CaFtsH06 protein was localized to the mitochondria and cell membrane. Additionally, silencing CaFtsH06 increased the accumulation of malonaldehyde content, conductivity, hydrogen peroxide (H2O2) content, and the activity levels of superoxide dismutase and superoxide (·O2−), while total chlorophyll content decreased under these abiotic stresses. Furthermore, CaFtsH06 ectopic expression enhanced tolerance to heat, salt, and drought stresses, thus decreasing malondialdehyde, proline, H2O2, and ·O2− contents while superoxide dismutase activity and total chlorophyll content were increased in transgenic Arabidopsis. Similarly, the expression levels of other defense-related genes were much higher in the transgenic ectopic expression lines than WT plants. These results suggest that CaFtsH06 confers abiotic stress tolerance in peppers by interfering with the physiological indices through reducing the accumulation of reactive oxygen species, inducing the activities of stress-related enzymes and regulating the transcription of defense-related genes, among other mechanisms. The results of this study suggest that CaFtsH06 plays a very crucial role in the defense mechanisms of pepper plants to unfavorable environmental conditions and its regulatory network with other CaFtsH genes should be examined across variable environments

As sessile organisms, plants endure limitations to their growth, development, and agricultural productivity caused by abiotic stresses such as drought, salinity, and high temperatures [1][2][3]. Unfavorable circumstances produce a variety of morphological and physiological changes in plants, as well as considerable damage to membrane integrity and stability, which results in intracellular material exosmosis [1][4][5]. Plants have a number of defense mechanisms enabling their long-term acclimation to adverse environmental conditions, such as changes in the levels of phytohormones and Ca2+ content as well as reactive oxygen species (ROS) signaling and plant-programmed cell death (PCD) [6][7]. Under stress conditions, ROS are induced, which leads to oxidative stress, and, interestingly, plants have evolved sophisticated adaptive systems at the molecular level, including antioxidants enzymes [8].
Protein denaturation will occur as a result of the sustained high temperature, which may result in the loss of protein function. Under heat stress conditions, through the restoration and hydrolysis of protein regulation systems, these defense mechanisms work together to repair functional failure proteins to maintain normal metabolic mechanisms [9]. Filamentation temperature-sensitive H (FtsH), which has an N-terminal transmembrane domain followed by an AAA domain [10][11], is a member of the ATP-dependent protease hydrolysis system family, which has ATPase and molecular chaperone activity [12][13]. Additionally, FtsH protease activity can degrade misfolded and mistranslated proteins and provide a control mechanism to remove dysfunctional proteins in cells as central elements of energy metabolic control systems [14][15].
In higher plants, there are many members of the FtsH family. There are 12 FtsH genes in Arabidopsis thaliana, with three proteins (FtsH3, FtsH4, and FtsH10) localized to the mitochondria, eight (FtsH1, FtsH2, FtsH5 to FtsH9 and FtsH12) targeted to the chloroplasts, and one (FtsH11) entering both the mitochondria and chloroplasts [10][16][17]; these genes participate in a variety of abiotic stress responses such as those to heat shock, hypertonicity, light stress, and cold [18][19][20][21][22]. AtFtsH6 protease degrades Lhcb3 and Lhcb1 so as to participate in senescence and high light acclimation [23]. AtFtsH1 participates in the degradation of the 23 kDa peptide fragment of the D1 protein photooxidative damage product [24]. In spinach, FtsH appears to be involved in D1 protein turnover in response to heat stress [25].
FtsH is an energy-dependent protease that is required for the growth of many prokaryotes. The FtsH protease from Escherichia coli can downregulate the heat shock response by degrading the heat shock transcription factor σ32 [26]. The FtsH gene from Bacillus subtilis can be induced by heat and hypertonic conditions [27], while knockout of FtsH in this same bacterial species induces resistance to salt and is heat-stress sensitive [28]. The expression of the FtsH gene in wine bacteria increases under high temperature and osmotic stress and can compensate for the growth defects of E. coli FtsH mutants under heat shock conditions [29].

2. The Expression Pattern of CaFtsH Genes in Pepper Across Different Tissues during Development and Stress Responses

The transcription data set of the 12 CaFtsHs genes were obtained from the pepper transcriptome database, with transcription data for the CaFtsHs genes at 11 different developmental stages (including six tissues). These data were drawn into a heat map with performing hierarchical clustering (Figure 1A). The heat map profile showed that CaFtsH06, CaFtsH01 and CaFstH05 genes were significantly upregulated. Among them, the CaFtsH06 was expressed in leaves (L1, L9) and flowers (F9). CaFstH05 (S5) was clearly expressed in seeds (S5), CaFtsH01 was expressed at higher levels in fruits (FST0), while the expression of CaFstH04 was highest in seeds (S11). CaFstH09 and CaFstH10 were only expressed at higher levels in flowers (F9), and CaFstH11 also showed higher expression levels in leaves (L9). The expression levels of CaFstH02 and CaFstH08 were not high in all the tested pepper tissues. In addition, the CaFstH12 gene was almost undetectable in all the tested tissues. 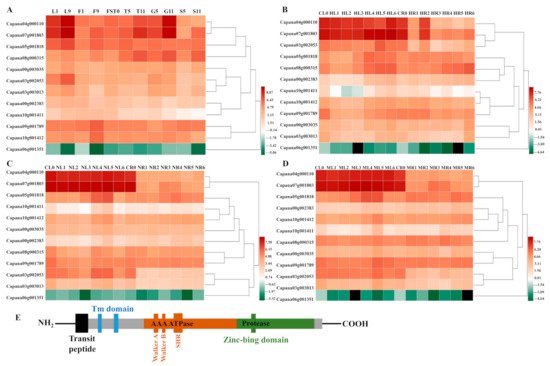 Figure 1. Heat map of CaFtsHs family gene expression in pepper. (A) Dynamic heat map of the CaFtsHs family genes in different tissues and organs of pepper. L1 and L9 stand for leaves collected at 2 d and 60 d after emergence, respectively; F1 and F9 describe the smallest and largest flower buds, respectively; FST0 indicates the fruit collected at 3 days after flowering (DAF); T5 and T11 stand for placenta collected at 30 and 60 (DAF), respectively; S5 and S11 show seeds collected at 30 and 60 DAF, respectively; G5 and G11 represent peels collected at 30 and 60 DAF, respectively. (B) Expression pattern of CaFtsHs family genes in pepper under heat stress. CL0/CR0 stand for control in leaves/roots, respectively, and HL/HR stand for expression levels of CaFtsHs genes after heat stress (42 °C) in leaves/roots at 0, 0.5, 1, 3, 6, 12, and 24 h t, respectively. (C) Expression of CaFtsHs family genes in pepper under salt stress (200 mM NaCl). CL0/CR0 represent control in leaves/roots, respectively; NL/NR stand for levels of CaFtsHs genes in leaves/roots at 0, 0.5, 1, 3, 6, 12, and 24 h post-treatment, respectively. (D) Profile of CaFtsHs family genes in pepper leaf and root tissues under osmotic stress (400 mM mannitol). CL0/CR0, ML1/MR1, ML2/MR2, ML3/MR3, ML4/MR4, ML5/MR5, and ML6/MR6 show the expression levels of CaFtsHs genes in leaves/roots at 0, 0.5, 1, 3, 6, 12, and 24 h post-treatment, respectively. The date was normalized with log2 transformation. (E) The conserve motifs of CaFtsH are shown in different colors. TM (transmembrane domain), SRH (second region of homology), Zn2+ metalloprotease domain (protease), and the conserved ATPase domains of Walker A and B are marked. Two transmembrane domains (TM domain, blue) and transit peptide (black) regions are shown.
The dynamic expression patterns of CaFtsH gene family members under different stress treatments (osmotic, heat, and salt stress) were also observed (Figure 1B–D). The expression level of CaFtsH06 gene in pepper leaves gradually increased after 6 h of continuous heat shock and was quite distinct at 24 h (Figure 1B). However, the expression levels of CaFtsH06 and CaFtsH01 first decreased after heat treatment, slightly increased after 1 h, and again decreased rapidly in the root tissue of pepper plants. After salt stress treatment, the CaFtsH06 gene was mainly accumulated in the leaves and its accumulation at 12 h was highest (Figure 1C). By observing the expression characteristics of CaFtsH homologs under 400 mM mannitol stress (osmotic stress) at different periods (0, 0.5, 1, 3, 6, 12, and 24 h), it was found that the expression of CaFtsH06 in pepper leaves under osmotic stress was most significant at 6 h of treatment (Figure 1D). After osmotic stress, CaFstH01, CaFstH02, CaFstH05, CaFstH06, CaFstH09, and CaFstH10 were upregulated in pepper leaves, while CaFstH02, CaFstH04, CaFstH05, CaFstH07, CaFstH08, CaFstH09, and CaFstH10 were upregulated in the roots. Under the stress of different periods of heat, salt, and osmotic stresses, the CaFstH06 gene had the strongest response in pepper leaves, while the CaFstH12 gene maintained a very low expression level in both pepper leaves and root tissue. The above results indicated that CaFtsH06 may be involved in a variety of environmental stress response processes. Moreover, most of the other genes belonging to the family were not significantly altered in terms of expression across multiple stress conditions (Figure 1). Gene structure and function are closely related, and the homologous LeFtsH6 and AtFtsH6 genes were noted in other reports to have had similar stress responses [30][31]. Therefore, CaFtsH06 was selected as the focus for further research.
FtsH is a typical membrane-bound AAA protease family member39. The structure of FtsH protease in pepper is the same as that of other biological FtsH homologs. It is characterized by a N-terminal region with one or two transmembrane (TM) helix domains required for oligomerization and a central AAA ATPase module. Additionally, the C-terminal domain of the conserved zinc binding site (HEXXH) is required for proteolytic activity [22]. By combining previous studies and the determination of the protein structure from a prediction website, Figure 1E and Figure 3 provides a schematic diagram of FtsH genes, describing the hypothetical structure of FtsH protease in Arabidopsis and pepper.

3. Expression of CaFtsH06 under Heat Stress in Pepper 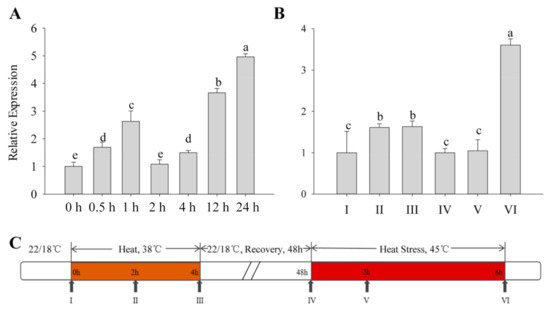 Figure 2. Analysis of the change in CaFtsH06 expression in pepper plants under heat stress. (A) Detection of background heat tolerance of CaFtsH06 in pepper. (B) Detection of acquired heat tolerance associated with CaFtsH06 in pepper. (C) A time course of high temperature treatment and normal temperature recovery, with the arrows indicating the time points at which pepper leaves were collected (samples I–VI). Different letters denote statistical significance (p < 0.05).

Based on the close phylogenetic relationship between tomato (Solanum lycopersicum L.) and pepper plants, we determined that the gene should be designated as CaFtsH06 (GenBank accession number XP016580880) based on its homology to tomato metalloproteinase LeFtsH6 (NP001234191). The full-length CaFtsH06 cDNA is 2301 bp, with a 194-bp 5′ untranslated region (5′UTR), 70-bp 3′untranslated region (3′UTR), and 2037-bp ORF. The corresponding protein molecular weight is 77.54 KDa, isoelectric point is 6.29 and instability index is 31.99 (Supplementary Table S1). Multiple alignments of the deduced amino acid sequences of CaFtsH06, AtFtsH6, LeFtsH6, and FtsH/E. coli revealed a consensus region (Figure 3). The central region of the CaFtsH06 contains two putative ATP binding sites (Walker A, Walker-B) and a putative SRH (the second region) for homology. The C-terminus of the CaFtsH06 protein contains a putative zinc-binding motif HEXGH (where each X is a non-conserved amino acid residue).

Figure 3. Analysis of the characteristics of FtsH protein structures. Multiple alignments of the deduced amino acid sequences of CaFtsH06, AtFtsH6, LeFtsH6, and FtsH/E. coli, with the FtsH-specific motif shown by a rectangular box. Part of the protein sequence is drawn with a colored rectangle to match the figure in (Figure 1E). 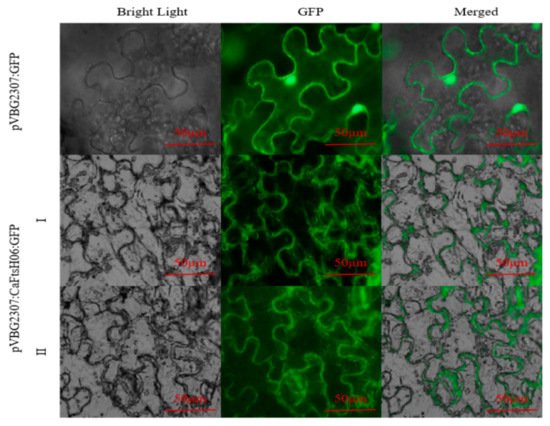 The silencing vector TRV2: CaFtsH06 was constructed in the Agrobacterium GV3101 to create CaFtsH06-silenced plants. The leaves of TRV2:CaPDS (positive control) pepper seedlings showed photobleaching symptoms, but no obvious difference in phenotype was observed between TRV2:CaFtsH06 and the negative control TRV2:00 pepper lines under normal growth conditions (Figure 5A). The silencing efficiency of CaFtsH06 in silenced pepper lines exceeded 60% (Figure 5B). Thus, the control plants (TRV2:00) and CaFtsH06-silenced plants (TRV2:CaFtsH06) were used for the subsequent experiment. 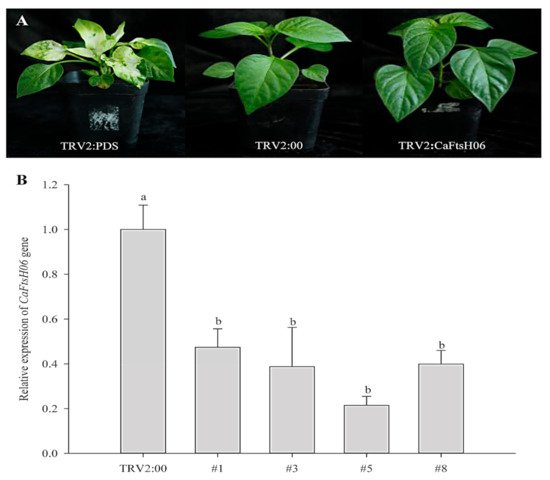 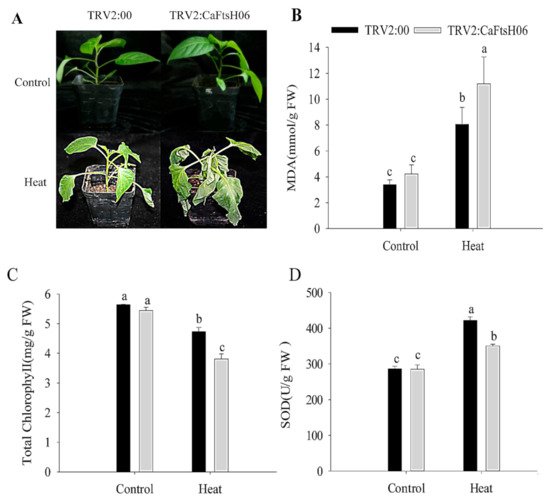 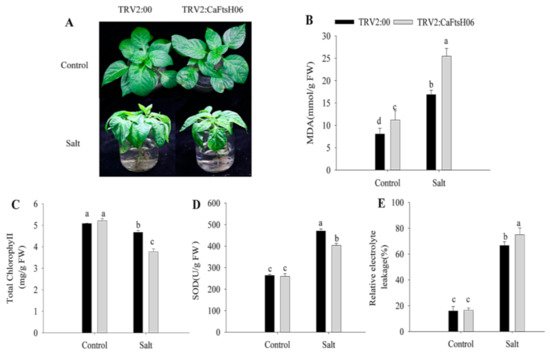 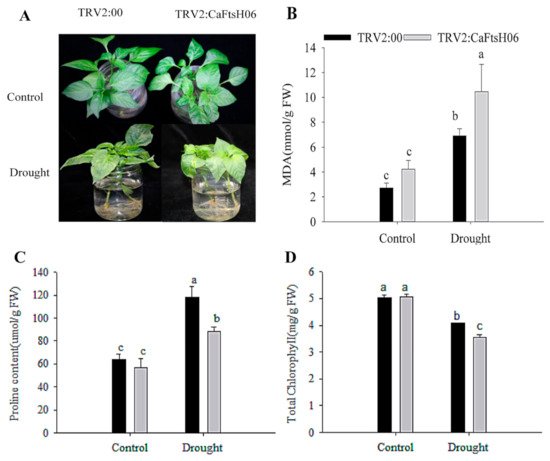 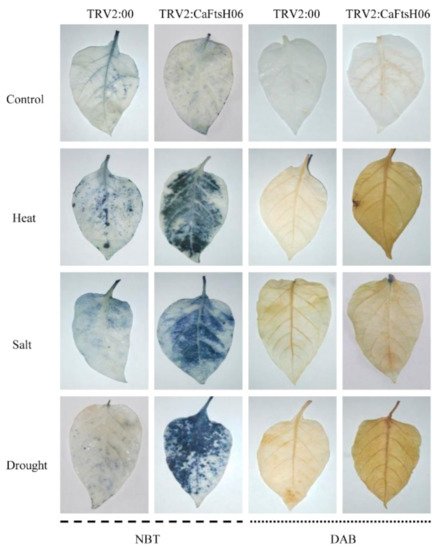 More
© Text is available under the terms and conditions of the Creative Commons Attribution (CC BY) license (http://creativecommons.org/licenses/by/4.0/)
Upload a video for this entry
Information
Subjects: Cell Biology
Contributor MDPI registered users' name will be linked to their SciProfiles pages. To register with us, please refer to https://encyclopedia.pub/register :
Zhen-Hui Gong
View Times: 31
Revisions: 2 times (View History)
Update Time: 12 Jul 2021
Table of Contents
1000/1000
Hot Most Recent