Submitted Successfully!
Thank you for your contribution! You can also upload a video entry related to this topic through the link below:
https://encyclopedia.pub/user/video_add?id=11738
Check Note
2000/2000
Modelling Parkinson’s Disease
Edit
Upload a video
This entry is adapted from 10.3390/brainsci11030373

Parkinson’s Disease (PD) is a chronic neurodegenerative disorder characterized by motor and non-motor symptoms, among which are bradykinesia, rigidity, tremor as well as mental symptoms such as dementia.

Parkinson’s disease (PD) is a complex, progressive neurological disorder characterized by degeneration of dopaminergic neurons (DA) in the substantia nigra pars compacta of the ventral mesencephalon [1]. The prevalence of PD is increasing with more than 6.1 million individuals reported globally to have PD in 2016 compared with 2.5 million in 1990 [2]. The increase in prevalence is due both to the ageing global population and associated changes in population behaviors such as smoking, decreased physical activity, and environmental factors such as air pollution [3][4]. PD occurrence is also sex-dependent with males displaying 1.5 times higher incidence compared to females [5]. The characteristic symptoms of PD are generally classified as motor (tremor, bradykinesia, and postural instability) and non-motor (dementia, depression, anxiety, fatigue, and pain) [6][7]. While the majority of PD cases are idiopathic without any clear family history, numerous genetic mutations have been found in individuals, with more rare and familial forms of PD also reported [8]. These genetic factors include autosomal dominant and recessive genes such as leucine-rich-repeat kinase 2 (LRRK2), PARK2 (encoding Parkin), PTEN-induced putative kinase (PINK1), PARK7 (encoding DJ-1), SNCA (encoding α-synuclein), and glucosidase beta acid (GBA). Each of these gene can be seen to present with variable clinical phenotypes.

There has been remarkable advances in the discovery of genetic mutations associated with PD in recent years [9]. Familial PD collectively accounts for only 10% of all PD cases while the remainder of PD cases have unknown etiology [10][11]. Patient-specific iPSC-derived DA neurons with specific mutations allows the underlying mechanisms of a particular mutation to be investigated in depth. Here, we report on the available data based only on human iPSC-derived neuronal models, investigating specific mutation-associated phenotypes of PD.

The first reported mutation associated with autosomal-dominant PD was that of α-synuclein [12]. α-synuclein is involved in numerous important cellular functions such as modulation of intracellular vesicle trafficking [13], dopamine metabolism [14], microtubule nucleation and proliferation [15], as well as the regulation of synaptic vesicle recycling [16]. There are numerous specific mutations associated with SNCA-related PD pathology including A30P, G51D, E46K, A53T, and A53E [17][18][19][20]. The severity of symptoms for PD is proportional to the number of SNCA copies deleted. In human iPSC-derived neurons the most commonly studied alterations in SNCA are the A53T mutation and multiplication of SNCA as they are the most common mutations associated with PD. Alterations in α-synuclein physiology results in a myriad of cellular changes must commonly mediated through mitochondrial dysfunction and oxidative stress. These changes and abnormal aggregation of α-synuclein not only induce neuronal loss but are also seen to prevent neuronal regeneration.

LRRK2 is a multi-domain protein exhibiting both kinase and GTPase functions located in the PARK8 locus on chromosome 12 [21]. LRRK2 is implicated as a significant genetic contributor to the development of autosomal dominant familial PD as well as some cases of idiopathic PD [22][23]. To date around 20 different LRRK2 mutations have been linked to PD pathophysiology [24]. LRRK2 is susceptible to several missense mutations including the LRRK2 G2019S, I2020T, Y1699C, and R1441C heterozygous mutations [25][26]. G2019S is the most commonly occurring mutation and is associated with 4% of familial PD and 1% of idiopathic PD cases [27]. LRKK2 is recognized to have pleiotropic roles across multiple domains including neurite outgrowth [28], modulation of synaptic vesicle endocytosis [29][30] and mitochondrial function and mitophagy [31][32].

Parkin is an E3 ubiquitin ligase, residing in the cytosol, that functions in the ubiquitin proteasome pathway [33][34]. PARK2 which is located on the 6q25.2–27 chromosome encodes parkin and is the most frequent gene mutation associated with autosomal recessive early onset familial PD [34]. Fifty percent of all PD cases under the age of 45 are associated with parkin mutations [35] (Table 1). Mutations in parkin range from small deletions and base pair substitution to large deletions spanning hundreds of nucleotides [36]. Parkin has been primarily shown to be important in maintaining normal mitochondrial function and integrity [37].

Mitochondrial dysfunction, abnormal morphology, and impaired mitochondrial homeostasis are some of the key features displayed by parkin iPSC-derived DA neurons. These neurons exhibit swollen cristae and a highly condensed matrix in the inner mitochondrial membrane (IMM), with abnormal mitochondrial morphology directly affecting function [38] as well as an elevation in the number of enlarged mitochondria [39][40]. Pyruvate kinase M and 14-3-3 epsilon are among the most dysregulated mitochondrial proteins associated with parkin mutated neurons, and this pair have also been consistently shown to be changed in post mortem brain tissues of PD patients [40][41][42].
The culmination of mitochondrial dysfunction is thought to be an increase in oxidative stress, leading to dopamine oxidation [43]. Under normal physiological conditions the transcription of mitochondrial enzymes such as monoamine oxidases (MAO) A and B are limited, as parkin suppresses dopamine-induced oxidative stress [44][45]. However, the levels of MAO-A and B were found to be significantly increased in parkin mutated iPSC-derived DA neurons, suggesting an escalation in dopamine-induced oxidative stress [45]. Increased oxidative stress is a consistent factor observed in numerous independent studies of parkin mutations [38][39][46]. Furthermore, anti-oxidative proteins are significantly reduced in parkin mutated iPSC-derived DA neurons [47]. Conversely, Nrf2, a protein promoting antioxidant gene expression is significantly enhanced in parkin mutated iPSC-derived neurons [38]. Related to this oxidative stress inducing environment, there is a marked decrease in dopamine uptake and increased levels of spontaneous dopamine release in iPSC-derived DA neurons with parkin mutations [48]. This increased spontaneous leak of dopamine is observed in both heterozygous and homozygous forms of parkin neurons, independent of intracellular Ca2+ [48] (Figure 1). Additionally, the number of correctly folded and trafficked dopamine transporters (DAT) are significantly decreased [48]. Thus, parkin is presumed to mitigate dopamine oxidation and control the transmission of dopamine. A further study has demonstrated that the activation of dopamine D1-class receptors in parkin neurons leads to large rhythmic outbursts of spontaneous excitatory postsynaptic currents (sEPSCs) [49] (Figure 1). These rhythmic outburst of sEPSCs resemble oscillatory activities observed within basal ganglia neurons in PD. Overexpression of parkin in this same study resulted in a significant rescue of iPSC-derived neurons, returning oscillatory activities to normal levels [49]. These data show that parkin mutations enhance abnormal dopaminergic modulation and release in neurons.
Table 1. PARK2-mutated iPSC-derived neuronal phenotypes. 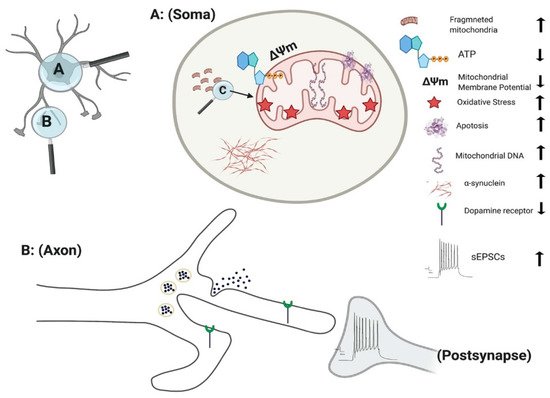 Phosphatase and tensin homolog (PTEN)-induced putative kinase 1 (PINK1) mutations are the second most frequent cause of early-onset PD and is involved in an autosomal recessive familial form of PD [55]. PINK1-related PD usually appears in the third or fourth decade of life, and like other recessive early onset forms, presents as a slow progression of the disease with a consistent response to levodopa treatment [56]. Forty-two different mutations have been found within the exons of the PINK1 in both heterozygous and homozygous states with Q456X is the most prevalent form of PINK1-related PD mutation [57][58] (Table 2). PINK1 consists of a C-terminal kinase domain and a mitochondrial targeting sequence at the N-terminus. Cytosolic PINK1 is released by truncation of the N-terminal portion of the gene in a proteasome-dependent manner [59][60]. PINK1 has been shown to have an essential role in mitochondrial function, calcium homeostasis, autophagy/mitophagy, protection from stress, and protein misfold [61][62][63].

PINK1 mutations are thought to impair mitochondrial function due to a loss of function, based on the upregulation of PGC-1α and an increase in mitochondrial DNA (mtDNA) copy number (Figure 1) [64]. Under normal physiological conditions, mitochondrial damage activates PINK1 kinase activity, and activated PINK1 phosphorylates ubiquitin at a conserved residue of Ser65 [65]. Parkin cooperates with PINK1 in the phosphorylation process, preparing the damaged mitochondria for lysosomal and proteasomal targeted degradation [66]. Pathogenic mtDNA mutations are found widely in individuals with PD, resulting in mitochondrial dysfunction. Siebler et al., demonstrated that while the level of mtDNA is decreased in wild-type neurons, it remained unchanged in PINK1−/− iPSC-derived neurons upon mitochondrial depolarization, suggesting an increase accumulation of mitochondria DNA dues to loss of PINK function [64]. PINK1+/− iPSC-derived neurons show a significant number of cells with fragmented mitochondria suggestion an alteration in mitochondrial cycling dynamics towards increased organelle fission [67] (Figure 1).
In addition, iPSC-derived neurons with PINK1 mutations show a significant reduction in the level of endogenous parkin levels and are unable to initiate mitophagy due to dysfunction in ubiquitination pathways [68]. Furthermore, the level of Phosphorylated-Ser65-Ub signals are significantly reduced within iPSC-derived TH+ neurons with PINK1 p.G411S mutation [52][69]. Consistent with this, the recruitment of parkin to mitochondria is impaired upon depolarization of mitochondria in PINK1 mutated iPSC-derived DA neurons [64]. Overexpression of wild type PINK1 in these DA neurons restored the translocation of parkin to mitochondria [64]. These studies highlighted the vital role of PINK1 in mitochondrial function and pathogenesis of PD.
One of the major indicators of mitochondrial dysfunction is the generation of reactive oxygen species (ROS) which in turn leads to cell damage due to oxidative stress [70]. Significant damage to lipids, proteins, and nucleic acids have been identified in fibroblast of s carrying PINK mutation [71]. Further study demonstrated that PINK1 deficiency results in an increased basal ROS in both the mitochondria (Figure 1) and cytoplasm, leading to increased oxidative stress in iPSC-derived DA neurons [72]. One of the key mechanisms in detoxification and prevention of ROS associated mitochondrial damage in the cytoplasm is the oxidation of glutathione (GSH). iPSC-derived neurons with PINK1 Q456X mutation display reduced GSH levels and showed increase vulnerability after exposure to low concentrations of valinomycin, concanamycin A, MPP+ and hydrogen peroxide (all promotors of oxidative stress) in comparison to control neurons [73].
Table 2. PINK1-mutated iPSC-derived neuronal phenotypes.

The GBA gene is located on chromosome 1 (1q21) and encodes for a lysosomal glucocerebrosidase enzyme (GCase), hydrolysing the glucosylceramide (GlcCer) into ceramide and glucose [74]. GBA mutation was first associated with PD approximately 14 years ago as a result of a PD like phenotype in PD with Gaucher disease [75]. The onset of PD with GBA mutations have been reported to be 30% at 80 years, with 9.1% of GBA carriers develop PD [76]. The main GBA mutations are p.N370S and p.L444P, enhancing the Lewy bodies formation, leading to PD and dementia [77]. Both mutations exhibit a reduced GCase activity that trigger an abnormal accumulation of α-synuclein [74]. Moreover, GBA has a key role in mitochondrial function and autophagy [78].

Dj-1 is a small protein with 189 amino acid residues, usually forming homodimers having a key role in anti-oxidant activities as well as directly inhibiting α-synuclein aggregation [79]. Mutations in DJ-1 have shown to cause early onset, autosomal recessive PD, either due to a base-pair deletion or a homozygous point mutation (L166P) [80][81]. The effects of mutations in DJ-1 on the development of PD has not been extensively studied in iPSC-derived DA neurons (Table 3). Increased dopamine oxidation and oxidative stress have been observed in iPSC-derived DA neurons, triggering mitochondrial oxidative stress, leading to the inactivation of glucocerebrosidaes [80]. This inactivation in turn inhibits lysosomal functions, elevating the level of α-synuclein, a known phenotype observed in iPSC- derived neurons from PD [80]. A more recent study utilized hiPSC-derived DA neurons carrying DJ-1 mutation and demonstrated a dysregulation in lysosomal proteins and activity [82][83][84].
Table 3. DJ-1-mutated iPSC-derived neuronal phenotype.

More
© Text is available under the terms and conditions of the Creative Commons Attribution (CC BY) license (http://creativecommons.org/licenses/by/4.0/)
Upload a video for this entry
Information
Subjects: Neurosciences
Contributor MDPI registered users' name will be linked to their SciProfiles pages. To register with us, please refer to https://encyclopedia.pub/register :
Leo Quinlan
View Times: 37
Revisions: 2 times (View History)
Update Time: 07 Jul 2021
Table of Contents
1000/1000
Hot Most Recent