Submitted Successfully!
Thank you for your contribution! You can also upload a video entry related to this topic through the link below:
https://encyclopedia.pub/user/video_add?id=11675
Check Note
2000/2000
Protein Complexes in Plants
Edit
Upload a video
This entry is adapted from 10.3390/ijms22137101

The study of protein–protein interactions (PPIs) is fundamental in understanding the unique role of proteins within cells and their contribution to complex biological systems. Affinity purification coupled to mass spectrometry (AP-MS) and proximity labeling coupled to mass spectrometry (PL-MS) are two powerful techniques that have significantly enhanced our understanding of PPIs. Relying on the specific binding properties of a protein to an immobilized ligand, AP is a fast, sensitive and targeted approach used to detect interactions between bait (protein of interest) and prey (interacting partners) under near-physiological conditions.

The study of biomolecular complexes is crucial in understanding the molecular mechanisms underpinning biological processes, protein function and subcellular protein localization [1][2][3][4]. Biomolecular complexes are principally formed by proteins interacting with other proteins (protein–protein interactions, PPIs), however complexes can also arise through the interaction of proteins with ligands such as nucleic acids, sugars, lipids and hormones [2][3][4]. As the biological function of a protein is defined by its interactions in the cell, an important step in investigating, disrupting or modulating biological processes lies in understanding how and why PPIs occur [1][4]. Advantages of protein complex formation are myriad, starting from greater proximity between substrate and catalyst to enhanced efficiency of whole biochemical pathways.
The field of proteomics has witnessed the development of many innovative methods for the identification and characterization of PPIs [1][3][4]. As method preferences to study protein complexes have changed over time, so too have the possibilities to obtain annotated or predicted protein complexes and composition. Over recent years, proteome-wide studies and computational approaches both point toward a scenario with an increasing number of heteromeric protein complexes being identified [5][6]. The methodology used to predict or identify protein complexes can be categorized in two ways: experimental and computational. Computational or in silico approaches are used to predict PPIs via computer simulations and are dependent on the algorithm used [7]. These predictions are based on high throughput proteomics data (binary or mass spectrometry-based methods), primary structure, 3D structure, domain, evolutionary relationship, genomic methods or a combination of these methods [7][8][9][10]. Experimental approaches are either performed in vitro or in vivo. While in vitro studies are generally performed on a low throughput scale, in vivo studies can be carried out in a high throughput manner. The most common methods used in the study of PPIs are biochemical protein purification or separation (2D gel electrophoresis, 2-DE [11]; blue native polyacrylamide gel electrophoresis, BN-PAGE; size exclusion chromatography, SEC) followed by mass spectrometry (MS), genetic engineering of cellular systems (yeast two hybrid (Y2H) assays and their variants; phage display), arrays (protein arrays or peptides microarrays), structural studies (NMR spectrometry, X-ray crystallography, cryoelectron microscopy) or fluorescence imaging (fluorescence resonance energy transfer, FRET; bimolecular fluorescence complementation BiFC) [1][3][4][12].
Recent studies highlight significant progress in the use of affinity purification and proximity labeling approaches combined with MS-based quantitative proteomics in studying PPIs [5][13][14][15]. Affinity purification mass spectrometry (AP-MS) is a fast, sensitive and targeted approach used to detect interactions between bait (protein of interest) and prey (interacting partners) under near-physiological conditions [16]. This method can be applied to large-scale studies and has been demonstrated to have high intra-and inter-laboratory reproducibility [17]. Similarly, proximity-dependent labeling methods are being increasingly used to detect transient PPIs under native conditions in living cells [14]. As the name suggests, proximity labeling (PL) relies on the principle that proteins must be physically close in order for them to interact and is predicted to be more precise in determining interacting partners [18].
Both AP-MS and PL-MS are powerful techniques that have significantly enhanced our understanding of PPIs. While these methods have become increasingly popular in animal systems, application of these techniques in plants remain underutilized. Combined, AP-MS and PL-MS have the potential to reveal an unprecedented spatial and temporal protein interaction network that better understands biological processes relevant to many fields of interest. For example, AP-MS can be theoretically used to detect transient PPIs as well as interactions involving potentially insoluble proteins such as membrane-associated proteins. Furthermore, PL-MS has the potential to detect hydrophobic interactions under native conditions and has been recently used to investigate membrane contact sites between the endoplasmic reticulum and mitochondria in plants [19].

PL-MS is a high-throughput approach for the systematic analysis of PPIs in vivo. While PL-MS is already firmly established in mammalian and unicellular eukaryote systems, application of this technique in planta remains challenging. PL utilizes enzymes that produce reactive molecules that covalently interact with proteins in close proximity. Labeled proteins can be isolated using conventional affinity purification methods and identified via immunoblot analysis or by protein mass spectrometry, Proximity labeling overcomes some of the limitations of AP-MS and Y2H, as abundant soluble proteins as well as insoluble membrane proteins can be effectively enriched under stringent denaturing conditions, which in turn, facilitates their identification. PL can detect weak, transient or hydrophobic PPIs in their native state and provides an unedited spatial and temporal protein interaction network for better understanding of a specific biological process. In addition, fusion of PL enzymes to a minimal targeting motif that restricts proteins to a particular subcellular location or structure, can be used to map the protein population therein [35]. While application of PL-MS to plant systems remains in its infancy, we summarize the recent development of this technology and highlight its potential in studying plant PPIs (Figure 2). 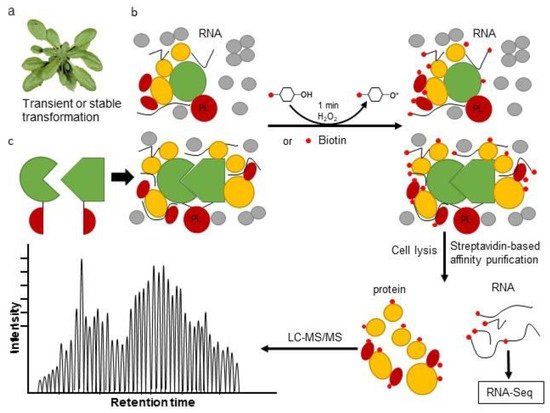 Figure 2. Overview of proximity labeling system. (a) Transient and stable protein with proximity-labeling (PL) enzyme transformation. (b) PL assay based on the tagged PL enzyme. A biotin ligase or APEX PL enzyme is fused to the target protein and expressed in plants. Upon the addition of a substrate, such as biotin or biotin-phenol and hydrogen peroxide (H2O2), proteins or RNAs are tagged by biotin. (c) Interacting pairs are fused to the PL enzyme at either the N- and C-terminus to investigate the composition of protein complexes. As two proteins interact in cells, the two halves of a split-PL are reorganized as a full PL enzyme and initiate the labeling of proximal partners of the protein complex. After protein extraction and incubating with streptavidin beads, biotin-labeled proteins or RNAs can be enriched for subsequent LC-MS/MS or high-throughput sequencing analysis.

While AP-MS results in the identification of proteins that form stable complexes, PL enables the identification of proteins that are in close proximity to the bait, which results in overlapping yet distinct protein identifications. By integrating AP- and PL-MS data, one has the ability to comprehensively characterize a protein’s molecular context and so several combined AP and PL experiments have been trialed. Enzyme combinations allow for both AP-MS and BioID analysis within a single construct and with almost identical protein purification and mass spectrometry (MS) identification procedures such as FLAG-BirA* tag [36][37], Multiple Approaches Combined (MAC)-tag [16] and Strep-Tactin [27] have now been developed. However, there are limitations in combining these two approaches due to the large size of BirA* and the small affinity purification peptide of a Flag or His tag. This strategy of combining AP and PL has not been used in plants to date; however, the generation of specific antibodies for PL tags may facilitate the combination of these two methods in the future.

More
© Text is available under the terms and conditions of the Creative Commons Attribution (CC BY) license (http://creativecommons.org/licenses/by/4.0/)
Upload a video for this entry
Information
Subjects: Plant Sciences
Contributor MDPI registered users' name will be linked to their SciProfiles pages. To register with us, please refer to https://encyclopedia.pub/register :
Youjun Zhang
View Times: 47
Revisions: 2 times (View History)
Update Time: 06 Jul 2021
Table of Contents
1000/1000
Hot Most Recent