Submitted Successfully!
Thank you for your contribution! You can also upload a video entry related to this topic through the link below:
https://encyclopedia.pub/user/video_add?id=11530
Check Note
2000/2000
Polar Lipids from Olives/Olive Oil
Edit
This entry is adapted from 10.3390/foods7070109

Polar lipids are minor components of olives and olive oil and include a myriad of molecules such as phospholipids and glycolipids.

For millennia, olive oil has been an essential ingredient in the Mediterranean diet, as a food source of healthy fat. It is produced mostly by Spain, Italy, Greece and by other countries of Southern Europe and North Africa [1]. Nowadays, olive oil’s economy has gained global importance, especially in gourmet cuisine, and its production has been extended to North and South Americas, Australia and Asia [1].
The increasing investment in the development of olive groves in these regions has been boosted by the benefits of olive oil’s consumption which is directly related to its composition. Olive oil is mainly composed of triacylglycerols (Ca. 98%) [2], primarily consisting of monounsaturated fatty acids, acknowledged for improving several cardiovascular risk factors [3]. In addition to the primary compounds, high-quality olive oils, such as virgin olive oils (VOOs), possess a plethora of minor components in the remaining 2% of their composition [2]. Some of the minor components confer distinct features to olive oil in terms of sensorial attributes and health benefits [4][5], and some components can be used for providing a chemical identity to olive oil [6].
Polar lipids are a group of minor components of olive oil [2]. The isolation, identification, and characterization of the minor components, such as polar lipids, might be essential to provide a molecular fingerprint for traceability and authenticity purposes [7]. The profiling of the major chemical components, such as triacylglycerols and total fatty acids, is insufficient to discriminate olives or olive oils, per se, and the simultaneous analysis of minor components is necessary [8]. VOOs are very susceptible to fraud and to tampering with other oils, as lower grade olive oils [9][10]. With recent analytical developments, new fast and sensitive methods have been claimed to evaluate olive oil’s authenticity [11]. Therefore, it has become urgent to find foolproof analytical approaches and molecular markers to reveal a specific chemical identity for olives and olive oil and to detect adulterated olive oil [10]. Polar lipids have been suggested as promising molecular markers of identity [12][13]. Some research has been carried out towards their identification in olives and olive oil, mainly through mass spectrometry (MS)-based approaches, but there is still much to be done.
Another topic concerning olives’ and olive oil’s polar lipids is their positive impact on human nutrition and health, which has been little exploited [14][15]. Additionally, in recent years, polar lipids from olive-derived industrial by-products, such as olive seeds and olive pomace, have been studied as alternative sources of bioactive lipids. The new applications of polar lipids would favor the sustainable use of olive’s industrial by-products and make them attractive from the biotechnological standpoint.

2. Identification of Polar Lipids from Olives, Olive Oil, and Their Industrial By-Products

The identification of polar lipids in olives and olive oil is a difficult task since they are minor components and include a broad range of lipid classes. Different analytical approaches have been used to unravel the polar lipidome of these matrices. The lipidomic workflows included lipid extraction, fractionation, analysis and quantification (Figure 1). 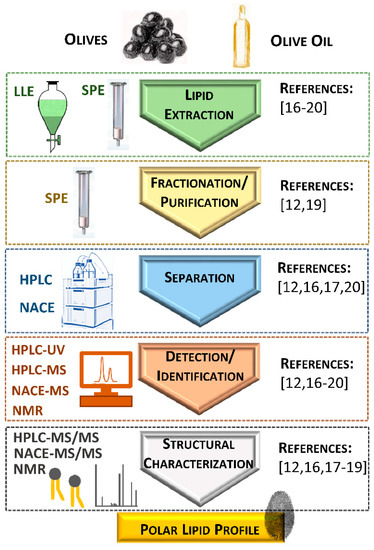 Figure 1. Schematic representation of the methodological approaches used for studying polar lipids from olives and olive oil. Abbreviations: HPLC, high-performance liquid chromatography; HPLC-MS, high-performance liquid chromatography coupled to mass spectrometry; HPLC-MS/MS, high-performance liquid chromatography coupled to tandem mass spectrometry; HPLC-UV, high-performance liquid chromatography with ultraviolet detector; LLE, liquid/liquid extraction; NACE, non-aqueous capillary electrophoresis; NACE-MS, non-aqueous capillary electrophoresis coupled to mass spectrometry; NACE-MS/MS, non-aqueous capillary electrophoresis coupled to tandem mass spectrometry; NMR, nuclear magnetic resonance; SPE, solid-phase extraction.
Liquid/liquid extraction (LLE) has been used for extracting polar lipids from olives and olive oil. The most commonly used LLE methods were a modified Bligh and Dyer method [16], a modified Folch method [17] and a sequential LLE method developed by Galanos and Kapoulas [17][18][19]. Solid-phase extraction (SPE), using aminopropyl-bonded silica as sorbent, was recently used to obtain polar lipid-enriched fractions directly from olive oil [12]. There are other emerging extraction techniques that can be used for oil extraction from olives, such as ultrasound or microwave or CO2-assisted techniques, but these approaches have not yet been reported for the analysis of polar lipids in olives or olive oil.
After extraction, the total lipid extract can be fractionated to obtain polar lipid-enriched fractions or specific polar lipid classes. Polar lipid-enriched fractions were obtained using SPE cartridges with different stationary phases (silica and diol-bonded silica) after olive oil’s LLE [19].
31P nuclear magnetic resonance (NMR) spectroscopy [18] and non-aqueous capillary electrophoresis (NACE) coupled with MS [17] were used for the detection and characterization of the phospholipid classes of olive oil.
The separation of the polar lipid classes obtained from olive oil was carried out by high-performance liquid chromatography (HPLC) coupled to different detectors, as ultraviolet detectors (HPLC-UV) [20] or mass spectrometers (HPLC-MS) [12][16][19]. The structural characterization of the polar lipid molecules, namely the polar head and fatty acyl composition, has been achieved by using tandem MS (HPLC-MS/MS in [12][16][19] and NACE-MS/MS in [17]).
The analytical approaches used so far (Table 1) showed different results. In olive fruits, the polar lipidome has been studied in the oil extracted both from the pulp and the seed. Bianco et al. (1998) identified glycolipids in the olive pulp, namely digalactosyldiacylglycerols as DGDG(18:3/18:3) and DGDG(18:1/18:3) [20]. Montealegre et al. (2013) analyzed the glycerophospholipid profile of olive fruits from different Spanish cultivars and regions [17]. The glycerophospholipids identified in the olive pulp and in the seed included phosphatidic acid (PA), lyso-PA, phosphatidylethanolamine (PE), lyso-PE, phosphatidylcholine (PC), phosphatidylinositol (PI) and phosphatidylglycerol (PG) [17] (Figure 2). 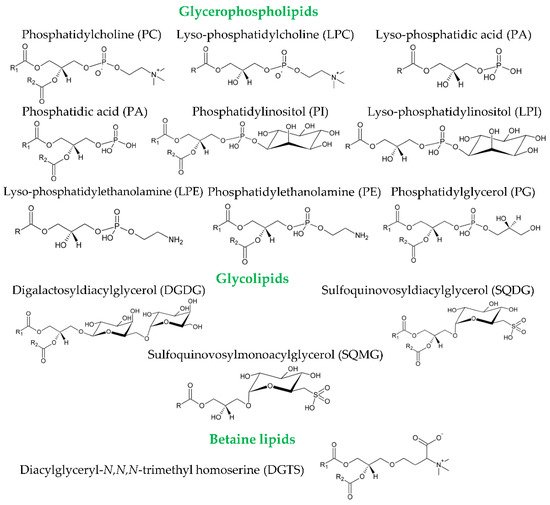 Figure 2. Chemical structures of the classes of glycerophospholipids and glycolipids identified in olives and olive oil. Polar lipids include a broad range of molecules. Phospholipids are divided into two main classes depending on whether they contain glycerol (glycerophospholipids) or a sphingosyl (sphingophospholipids) backbone. Glycerophospholipids, besides the glycerol backbone, contain a polar phosphorus moiety. They derive mainly from sn-1,2-diacylglycerols and, thus, contain structures that are based on 3-sn-phosphatidic acid [21]. These lipids are grouped into classes based on the composition of their polar head group that is attached to the phosphate residue in sn-3 position. The polar head may be an amino acid, an amino-alcohol, a carbohydrate or another functional moiety. Each head group class is further differentiated into subclasses based on the sn-1 and sn-2 substituents on the glycerol backbone [21]. Glycolipids also include a wide variety of structures. These structures consist in acylglycerols (in the case of glycosylglycerides and sulfolipids) joined to a carbohydrate moiety by a glycosidic linkage at the sn-3 position [21]. Betaine lipids are ether-linked glycerolipids containing a betaine moiety. These lipids contain a polar group linked by an ether bond at the sn-3 position of the glycerol moiety, with the fatty acids esterified in the sn-1 and sn-2 positions [21]. 1,2-diacylglyceryl-3-O-4′-(N,N,N-trimethyl)-homoserine (DGTS) have been commonly found in lower plants, algae, fungi, and bacteria [22]. R, R1, and R2 represent fatty acyl chains.
Table 1. Summary of the polar lipid classes identified and quantified in olives and olive oils in different studies.

Olive oil mills and pitted table olives’ producing industries generate several by-products, such as olive pomace and olive stones. These by-products can be recovered to create novel value-added products. In the case of polar lipids, their concentration is tens to hundred times higher in olive pomace oil [18] and olive seed oil [23], comparatively to olive oil [18][24]. Thus, polar lipids from olive pomace and olive seeds have been regarded as potentially useful from the nutritional and biotechnological standpoints and have been suggested for several novel industrial applications.
Olive pomace was proposed as the new promising lipid source for the sustainable production of animal feeds, namely functional fish feeds, feed for aquaculture fish and as an ingredient for inclusion in animal feedstocks [25]. Olive pomace after stoning has been extensively studied in mammal’s species as feed integration for improving the nutritional and nutraceutical properties of their meat as well as their milk and derived cheese [26][27][28][29][30]. Other studies carried out on fish species revealed that polar lipids from olive pomace oil [31] provide high nutritional value for fish feed [25] and increase fish cardio-protective properties [32]. The later studies carried out on fish fed with fish oil containing 4% of olive pomace indicated that the lipid fractions containing polar lipids had inhibitory activity against PAF-induced platelet aggregation [32]. Further research is needed on the bioactive properties of olive pomace and olive pomace oil for animal feed purposes and to identify the molecules within the polar lipid fraction responsible for such activity.
Other residues resulting from table olives’ production are the stones that contain the seeds. The economic potentialities of olive seeds and olive seed oil have been explored in the last few years, primarily by the industry [33].
Olive seed oil has 0.1% of phospholipids [23] and may have diverse technological uses in the soap, cosmetics and pharmaceutic industries [23]. Phospholipids from olive seeds can also be used for lecithin production in the agri-food industry [23]. Food derived phospholipids have several biomedical applications, for instance, as emulsifiers in pharmaceuticals and for the preparation of liposomes for cosmetics and drug delivery [34][35].
The potential biotechnological applications of the olive-derived by-products highlight the valuable alternatives that underlie the table olive’s and olive oil’s industries. However, more research is needed to characterize the polar lipidome, its health benefits and the cost-benefit of being extracted from these by-products.

More
© Text is available under the terms and conditions of the Creative Commons Attribution (CC BY) license (http://creativecommons.org/licenses/by/4.0/)
Upload a video for this entry
Information
Subjects: Food Science & Technology
Contributor MDPI registered users' name will be linked to their SciProfiles pages. To register with us, please refer to https://encyclopedia.pub/register :
Eliana Alves
View Times: 140
Revisions: 2 times (View History)
Update Time: 01 Jul 2021
Table of Contents
1000/1000
Hot Most Recent