Submitted Successfully!
Thank you for your contribution! You can also upload a video entry related to this topic through the link below:
https://encyclopedia.pub/user/video_add?id=11173
Check Note
2000/2000
Smartphone-Enabled Personalized Diagnostics
Edit
Upload a video
This entry is adapted from 10.3390/diagnostics11061067

Smartphones are increasingly versatile thanks to the wide variety of sensor and actuator systems packed in them. Mobile devices today go well beyond their original purpose as communication devices, and this enables important new applications, ranging from augmented reality to the Internet of Things. Personalized diagnostics is one of the areas where mobile devices can have the greatest impact.

Today, mobile phone capabilities include 3G to 5G, WiFi, Bluetooth, and near field communication (NFC). When mobile phones were first employed in POC settings in the early 2000s, users could only take advantage of their data transmission capabilities. They were, thus, initially used to replace personal digital assistants (PDAs) and facilitate communication between medical staff [1]. Mobile phone cameras began to be exploited shortly after, and one of their earliest uses was to capture screenshots from ultrasound images for sharing among professionals [2]. Shortly afterwards, Whitesides et al. reported one of the first uses of a mobile phone camera to capture images from a paper-based assay and send them elsewhere for analysis [3]. Since then, the use of phone cameras has become widespread, and nearly all works reporting the use of mobile-phone-based diagnostic systems rely on image capture and analysis, as highlighted in recent reviews [4][5][6][7]. Mobile phone cameras have enabled colourimetric methods [8] and more advanced and sensitive techniques such as fluorescence [9] and electrogenerated chemiluminescence (ECL) [10]. Alternatively, the ambient light sensor (ALS) present in smartphones can also be used to develop simple optical sensors in tandem with light-emitting detection methods [11]. However, an important limitation of image-based systems is that they require bulky accessories to ensure controlled lighting or darkness and an adequate focal distance [12]. The silver lining is that some of the colourimetric tests available today will still render quantitative information if placed in direct contact with either the camera or the ALS, as already suggested by Hogan et al. [13].
Electrochemical detection methods, which are complementary to the aforementioned optical methods, can also be applied by mobile phones. Although working electrode potential control is difficult in solid-state devices, stable printed reference electrodes have been reported, showing that high-performance, inexpensive, and disposable devices can be produced [14]. Miniature potentiostats that can be connected to the mobile phone USB/charger port have been developed as well [15][16][17]. The audio jack has also been used to deliver power to an electrochemical cell. Although, in this case, potential control is restricted to potential steps, smartphones have been successfully used to drive an ECL-based detection system [10][13]. These works illustrate the feasibility of spectroelectrochemical analysis [18] using smartphones by coupling electrochemical actuation and optical detection. However, it can be anticipated that as mobile technologies evolve and audio jacks and charge connector ports disappear, electrochemical systems will remain very much alive [19][20].

2. Next Steps for Smartphone Full-Capacity Exploitation in Personal Diagnostic Systems

Besides image acquisition and data transmission, current smartphones display a variety of functions and capacities that can or could be helpful for the production of POC diagnostic devices, as represented in Figure 1. For instance, mobile phone devices can transfer energy wirelessly in three different ways, using radiofrequency (RF), light, and motion (vibration). RF is one of the easiest and most efficient ways to interact with the disposable component of the diagnostic device, as reflected by the increasing volume of publications reporting NFC-powered POC devices. The flashlight and the screen can be useful light sources too, and their use has been occasionally described. In contrast, haptic feedback systems responsible for providing a tactile response to certain user inputs, i.e., vibration, have received virtually no attention from the lab-on-a-chip community until now. This is despite the fact that they could facilitate reagent mixing in a smartphone-based POC or lab-on-a-chip device, for instance, by facilitating the dissolution of dry reagents in microchannels and microchambers upon wetting with capillary laminar flow. 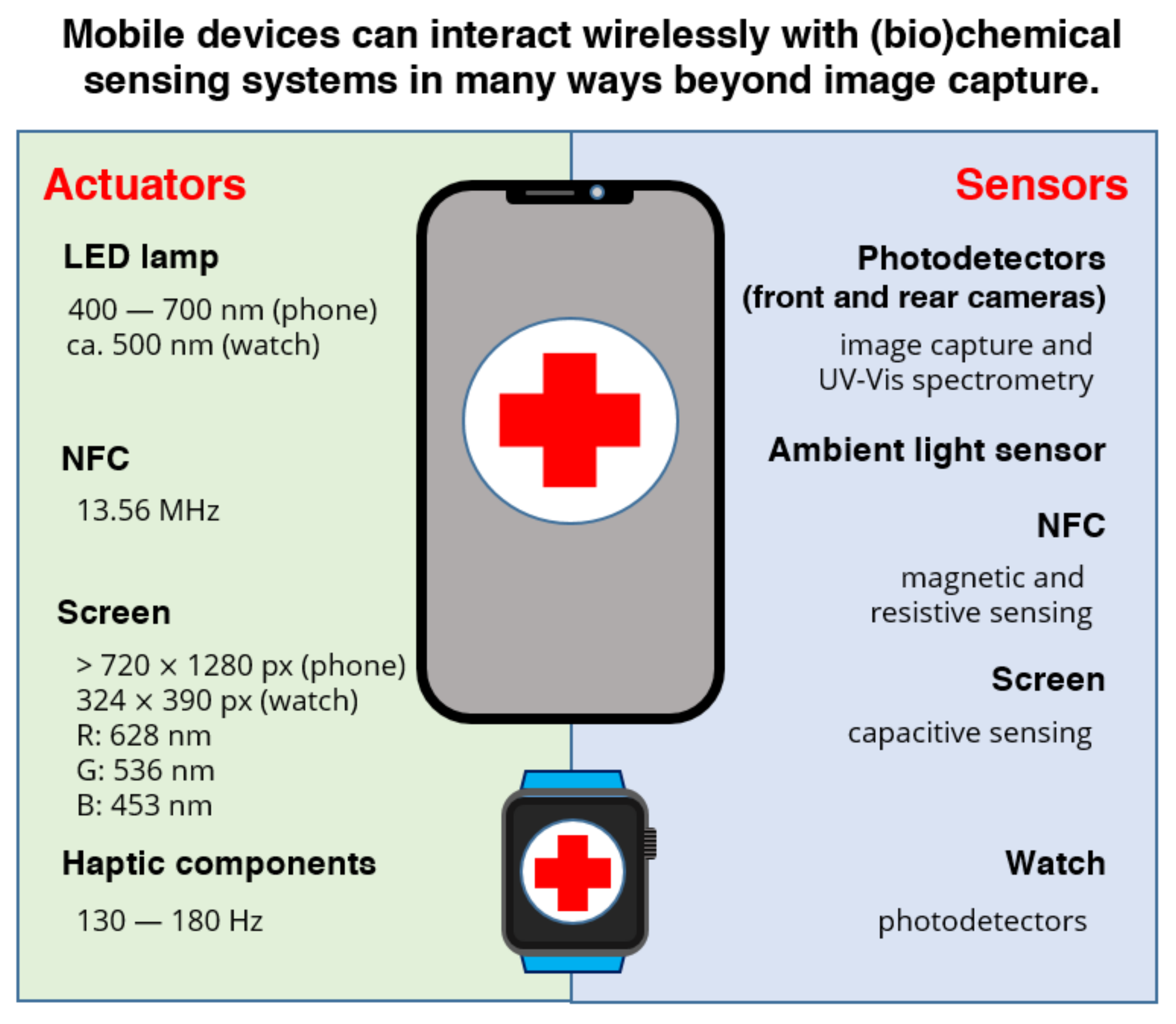 Following the worldwide sanitary crisis of 2020, the need to develop population-wide testing strategies and tools has become clear and is more pressing than ever. Mobile devices are ubiquitous and have the potential to become truly personal analytical platforms in the near future. This is thanks to their powerful analog, digital, and telecommunication functions combined with cloud data processing. The new systems will combine the high-performance of advanced molecular diagnostics with the affordability of current lateral flow devices and will fulfill the ASSURED criteria more closely.
Here, we have shown examples of how mobile devices can be used beyond image analysis and data transmission to enable personalized diagnostic platforms that can reach a wider population base. Mobile devices can transfer different forms of wireless energy (radiofrequency, light, and even motion) to disposable sensing devices that are able to process a sample and return vital analytical information to the mobile device for further processing.
We believe that this vision is possible because both the technology and much of the required knowledge already exist. However, the development of disposable platforms integrating functionality beyond current lateral flow tests presents important challenges for both materials science and manufacturing, as the environmental impact and sustainability of the new platforms must also be considered.