Submitted Successfully!
Thank you for your contribution! You can also upload a video entry related to this topic through the link below:
https://encyclopedia.pub/user/video_add?id=10964
Check Note
2000/2000
Review of Ionic Liquids Toxicity
Edit
Upload a video
This entry is adapted from 10.3390/ijms22115612

Ionic liquids (more accurately room-temperature ionic liquids (RTILs)) can be defined as materials composed of organic or inorganic cations (like imidazolium or pyridinium) and anions (e.g., nitrate, acetate, tetrafluoroborate, dicyanamide, bis(trifluoromethylsulfonyl)imide and lactate) that are liquid at or below 100 °C. The number of possible combinations of a cation and anion is estimated to reach 106, making it theoretically possible to synthesize an IL targeted for a specific application or property.

Ionic liquids (ILs) were initially hailed as a green alternative to traditional solvents because of their almost non-existent vapor pressure as ecological replacement of most common volatile solvents in industrial processes for their damaging effects on the environment. It is common knowledge that they are not as green as desired, and more thought must be put into the biological consequences of their industrial use. Still, compared to the amount of research studying their physicochemical properties and potential applications in different areas, there is a scarcity of scientific papers regarding how these substances interact with different organisms. The intent of this review was to compile the information published in this area since 2015 to allow the reader to better understand how, for example, bacteria, plants, fish, etc., react to the presence of this family of liquids. In general, lipophilicity is one of the main drivers of toxicity and thus the type of cation. The anion tends to play a minor (but not negligible) role, but more research is needed since, owing to the very nature of ILs, except for the most common ones (imidazolium and ammonium-based), many of them are subject to only one or two articles.

Ionic liquids (more accurately room-temperature ionic liquids (RTILs)) can be defined as materials composed of organic or inorganic cations (like imidazolium or pyridinium) and anions (e.g., nitrate, acetate, tetrafluoroborate, dicyanamide, bis(trifluoromethylsulfonyl)imide and lactate) that are liquid at or below 100 °C. The number of possible combinations of a cation and anion is estimated to reach 106, making it theoretically possible to synthesize an IL targeted for a specific application or property [1]. ILs have been widely studied due to their unique properties, such as low flammability, negligible vapor pressure, high ionic conductivity, extensive liquid temperature range, high thermal and chemical stability, high solvation ability for organic, inorganic and organometallic compounds, selectivity and being easy recyclable through the separation from volatile compounds [2][3][4][5][6][7][8]. Due to these properties, ILs can be used in various areas from chemistry to engineering through the medical and the pharmaceutical fields, mainly as promising “green” alternatives to traditional organic solvents [9][10][11][12][13][14][15][16][17][18].
Initially, ILs were considered green solvents, safe for the environment and human life and health, mainly due to their negligible vapor pressure. However, some ILs are produced from non-renewable energy sources and are poorly biodegradable in the environment, undermined their green character [19][20][21]. When designing and synthesizing new chemical products as suggested in the 3rd, 4th and 10th green chemistry principles, not only their efficiency and cost should be considered, but also their toxicity to human health and environment [22][23]. ILs are not currently widely used for commercial purposes. However, some companies have started their industrial use, BASIL™ from BASF probably being the most widely known. Consequently, for a larger production (over one metric ton per year), safety information on the ILs must be provided, according to current legislation, like, for example, the European Union Regulation REACH demand [24].
The disposal of ILs is mainly performed on wastewater discharges and leaching of landfills leading to increased concern about contaminating aquatic and terrestrial ecosystems. The first studies concerning the toxicology of ILs began in the 2000s by Pernak and collaborators [25][26], where the authors analyzed the antimicrobial activity of pyridinium, bispyridinium and benzimidazolium chlorides. In 2015, Amde et al. [27] published a review where the transport and transformation of ILs in the environmental systems were studied and a compilation and analysis of the existing data about the toxicity of ILs. The authors presented a scheme resuming how structural modifications (cation type, cation side-chain and anion effect) influence the toxicity of ILs. They refer that cholinium-based ILs are the least toxic ILs, that the increase of the side-chain hydrophobicity and its length increases the toxicity and the increase of anion lipophilicity and instability also increases the ILs toxicity. The authors also present some routes for synthesizing or selecting the less toxic and/or more biodegradable IL. A year later, a meta-analysis of ionic liquid literature and toxicology [28] was published where the authors referred that from the total amount of publications of ILs, only less than 3% were studies concerning their toxicity. A percentage that tracks well with Pawlowska et al. [21] showing that in 2018 the number of publications (in the Web of Science database) dealing with ILs was more than 8000, and for the keywords “toxicity ionic liquid,” only 250 were retrieved. This number is significantly low compared to the vast number of ILs that can be tailored (Figure 1). Another important issue is related to the effect of ILs on different organisms. For example, an IL can be toxic to an organism but practically harmless to another, so it is important to analyze the toxic effect of ILs on different organisms, from the simpler ones (bacteria or fungi) to the more complex (plants and animals). 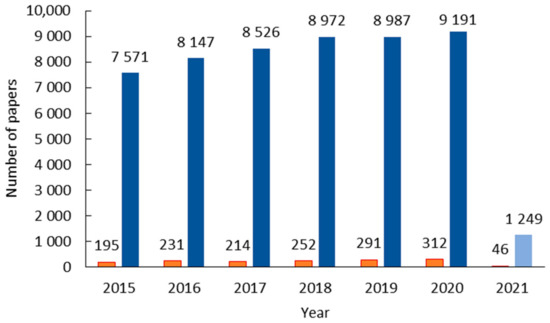 Figure 1. Number of scientific papers published from 2015 to 15th March 2021 concerning “ionic liquids” (blue columns) and “toxicity ionic liquids” (orange columns).
The need generated by the project ILGerants—new ionic liquids-based mixtures for absorption refrigeration (http://ilgerants.rd.ciencias.ulisboa.pt/, access date: 16 March 2021) in choosing the most appropriate ILs for absorption refrigeration, while considering their toxicity, led to this review, whose purpose is to condense all of the most recent toxicological (plants, microorganisms and animal) studies of ILs from 2015 onwards. Still, it is important to refer that besides toxicity, the biodegradability of ILs is also an important environmental factor and should also be studied.

The constant need to improve and make the industrial process cleaner and more sustainable propels developing more efficient solvents and fluids. ILs have been widely studied as green alternatives to common organic solvents (due to their negligible vapor pressure) for many other applications in practice encompassing almost every modern industry. Nonetheless, over the years, it has become clear that they are not without fault even when considering only their “green” aspect since they can be very harmful to the environment. Over the last years, many advances have been made in improving our understanding of the toxicity effects of ILs on a wide variety of living organisms present in the environment. It is not feasible to assess the harm that all possible combinations of cations and anions can cause to even select model species. Still, not too broad a brush can be used to decide the damage they can inflict upon wider industrial adoption. What are then the best tools to economically and rapidly determine the influence that the presence of ILs on the environment can have? With an ever-increasing amount of experimental data available, SAR methods will better predict the toxicity of this class of fluids. Still, empirical data should ideally always accompany their introduction to the market.
It can be somewhat difficult to extract general conclusions. There are well-known effects of the length of the alkyl side-chain of the cation and its structure (pyridinium, imidazolium, piperidinium, pyrrolidinium, ammonium, cholinium, etc.), that overall point to their lipophilicity and consequent ease of penetrating the cell membrane. The stability and lipophilicity of the anion and the functional groups present on the cationic side-chains also influence the final toxicity. Regarding these, we should probably point out that there seems to be a limit, slightly dependent on species, for the increase in toxicity with the increase of the alkyl side-chain length, after which a plateau or even decreased toxicity occurs. This may be related to the bulkiness of the ions, as Weyhing-Zerrer et al. [29] suggested when they observe the results of combining imidazolium cations of varying chain length with the [(C2F5)3PF3] anion. On this subject, the effect of the anion has been comparatively less studied than that of the cation. Most amino acid anions have been tested to lower toxicity. This may be an inevitable result because so far, most variations on ionic liquids come from changing the cation, so less variety is found on the anion. Moreover, because researchers have seen how the cation is the main driver of toxicity, it makes sense to try modifying it to achieve the desired toxicity, whether higher (for antibacterial or antifungal applications) or lower depending on the application. Self-aggregation can also be the cause of decreased toxicity since it decreases the possibility of direct interaction with the protection barriers of the organisms. How dangerous an IL is to a particular species also depends on the composition and structure of these barriers that vary greatly from one organism to another. What experiments should we prioritize then? Again, as it is commonly known, when market uptake is at stake, the tests to run are those that account for where the new product is expected to be used, and thus, what organisms will contact them in regular use and in the case of spillage. International organizations and environmental agencies have standard tests to assess the danger to many model species and, of course, humans. Standard tests are not without fault, so modifications to them are well within the purview of investigators, for example, adjusting the pH of a solution to ascertain whether an observed phenomenon results from the acidic nature of the IL introduced or changing the tested species (particularly in microorganisms) to check if a known difference in the structure of the cell membrane affects the toxicity. Proposing new tests to address an identified gap in the ones currently in use also helps move this research area forward. We would like to encourage the usage of these tests together with the tools that we have seen deployed by several laboratories along this review. This will help to better understand the processes taking place at the molecular level and, consequently, better predict how new ionic liquids will affect the environment.

More
© Text is available under the terms and conditions of the Creative Commons Attribution (CC BY) license (http://creativecommons.org/licenses/by/4.0/)
Upload a video for this entry
Information
Subjects: Toxicology ; Others ; Others
Contributor MDPI registered users' name will be linked to their SciProfiles pages. To register with us, please refer to https://encyclopedia.pub/register :
Xavier Paredes
View Times: 97
Revisions: 3 times (View History)
Update Time: 29 Jun 2021
Table of Contents
1000/1000
Hot Most Recent