Halloysite nanotubes with different outer surface/inner lumen chemistry (SiO2/Al2O3) are natural objects with a 50 nm diameter hollow cylindrical structure, which are able to carry functional compounds both inside and outside. They are promising for biological applications where their drug loading capacity combined with a low toxicity ensures the safe interaction of these nanomaterials with living cells.

Two approaches are generally accepted to impart antibacterial properties to halloysite nanotubes: (a) loading of organic molecules inside halloysite lumen and adsorption on the external surface (Figure 1), and (b) outside grafting (Figure 1).

Figure 1. A scheme of antibacterial compound loading into halloysite lumens.

Adsorption on halloysite and loading functional agents inside the nanotubes may be achieved by their stirring in drug solutions, assisted with sonication and vacuuming. The loading efficiency depends on the procedure and the charge and size of the molecule. Widely utilized chemicals such as chlorhexidine, povidone iodine, brilliant green, iodine, doxycyclin, amoxicillin, vancomicin, potassium calvulanate, gentamicin sulfate, and tetracyclin were loaded inside halloysite using sonication and vacuum [1][2][3][4][5][6]. Drug loaded halloysite was applied to produce antibacterial composites for bone regeneration, alginate-based wound dressing, electrospun membrane, and nanofibers [7][8][9][10]. Drug release kinetics is the most important parameter for long lasting antibacterial properties. The most practical and common anti-bacterial drugs are cationic chlorhexidine, anionic povidone iodine, and amoxicillin, the chemical structures of which are shown in Figure 2. 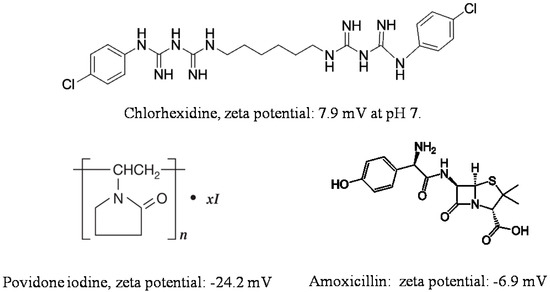 Povidone-iodine and amoxicillin have also been investigated for slower drug release [2]. In our study, we used saturated solutions of povidone iodine (80 mg/mL in water) and amoxicillin (50 mg/mL in ammonium hydroxide). Halloysite was added to the drug solutions and stirred to obtain homogeneous suspensions. The suspensions were placed in a vacuum for three cycles, 1 h each, to ensure maximum loading. Then the halloysite was washed twice to remove any excess/external drug, dried in a vacuum desiccator overnight, and powdered. Such powder formulations may be stored for a long time and dispersed in water with mechanical stirring before usage. Drug loading efficiency was determined by thermogravimetric analysis (TGA), as shown in Figure 3a,b. The drug release was analysed with a UV-Vis spectrophotometer at 224 nm (povidone iodine), and 227 nm (amoxicillin). The TGA curves showed 7.6 and 8.3 wt % of povidone-iodine and amoxicillin loading in halloysite. The loading could be increased with lumen enlarging by inner alumina etching in sulfuric acid. The release kinetics (Figure 3c,d) show the antiseptic extended release during 6–20 h. The formulations were efficient for the inhibition of S. aureus and E. coli for over one week. 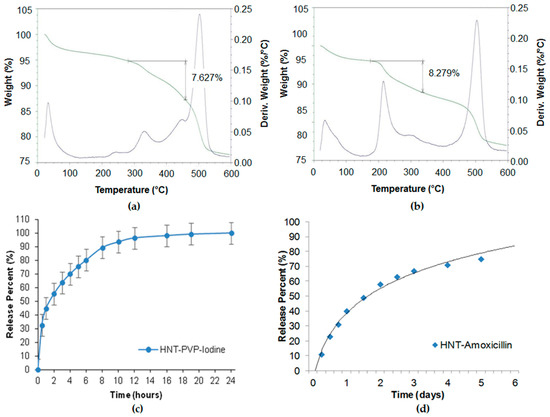 Such formulations are also perspective for sprays, when clay nanotubes loaded with antiseptics are used in 3–5 wt % aqueous suspension and after being sprayed form thin coatings with prolonged antimicrobial activity.

The halloysite/salicylic acid system resulted in stable water suspension with a slow release of salicylic acid (over 50 h) [13]. The salicylic acid released from clay tubes showed an antibacterial activity at lower concentrations than free salicylic acid, likely due to the close contact or penetration of halloysite nanotubes in bacteria.

The efficiency reached 15 wt % when vancomycin was loaded in halloysite from a saturated solution [5]. The released drug exhibited high antibacterial activity to S. aureus and B. streptococcus, even after the long period of 33 days. The obtained system is proposed for bone and soft tissue infections treatment, where local antibiotic effect is needed.

Halloysite could be employed as a protecting carrier for chemically sensitive drugs and molecules. Ciprofloxacin attached to an APTES-functionalized halloysite helped to prevent complex formation with iron and other metal ions which are in contact with ciprofloxacin during drug delivery. The complexation studies between ciprofloxacin and iron revealed a 71 ± 1% decrease in undesirable drug absorbance [14]. Clay nanotubes were also investigated for the loading of volatile compounds, like essential oils, to prevent them from evaporation and losing antibacterial activity [15][16][17][18][19].

To reduce the release rate of drug molecules from clay nanotubes, the end-stoppers or polymer surface coating could be synthesized. Dextrin caps were formed on the nanotubes end to prevent early drug release [20]. Benzotriazole–copper coating on halloysite nanotubes provided a more sustained release of brilliant green, extending it from 50 to 200 h [3]. In [18], thyme oil was encapsulated inside clay nanotubes and then caged inside using end-stoppers or surface coating. Both ends of the nanocapsules were capped with a sodium alginate-calcium chloride complex. Coating the negatively charged surface of untreated clay nanotubes was performed using the layer-by-layer method with positively charged polyethyleneimine. The surface coating of halloysite significantly extended the release behaviour of essential oils at room temperature over that of untreated and end-capped nanotubes.

A standard zone of inhibition assay was developed to compare the antibacterial action of the ciprofloxacin in solution and encapsulated in halloysite; in all cases, 5 µg of the antibiotic was loaded [21]. The size of the zone of inhibition indicates the effectiveness of the antibiotic and is often used as a quick test for the resistance of a strain. After each 24 h, the ciprofloxacin loaded discs were moved and added to a new spread plate to get a new zone of inhibition. Ciprofloxacin not loaded in the nanotubes worked only within 12 h. The nanotube formulations were effective over four days. This indicates a prolonged release that remains effective against multidrug resistant P. aeruginosa over an extended time. Even longer efficiency was observed when ciprofloxacin loaded halloysite was composited with bone implant cement polymethmetacrylate.

The exponential increase in bacterial resistance to chemical antibiotics and losing their effectiveness in the treatment of infections initiated the interest of researchers and pharmaceutical industries to the application of peptides as therapeutic antimicrobial agents [22]. Nicin and pediocin were successfully loaded inside halloysite [23]. The antimicrobial activity was better when halloysite nanotubes were used as a support agent rather than octadecylamine-modified montmorillonite or bentonite clays.

The loading of organic antiseptics inside halloysite, with its further slow release, may have a limitation. It should be taken into consideration that the exposure of pathogens to progressively lower drug concentrations could become a risk factor for the selection of drug resistant strains. This is why other strategies should be developed. A possible issue lies in producing antibacterial composites with metals. Nanostructures containing silver, copper, zinc, iron oxides, and their combinations are well known for killing even antibiotic resistant bacteria, which is why they are widely applied for making materials with antibacterial properties [24][25][26][27][28][29]. The use of templates helps to overcome the aggregation of particles and their release to the environment. Halloysite has great potential as a carrier for metal particles grafting and metal complexes formation [30][31]. Possible metal/halloysite structures are shown in Figure 4, together with various mechanisms of killing pathogenic species. 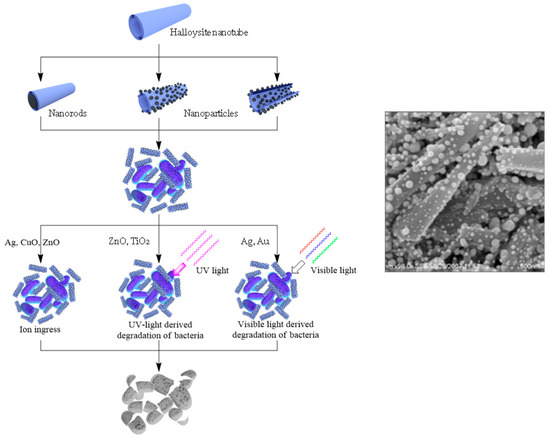 Figure 4. Scheme of antibacterial metal structures deposition onto/into the nanotubes, with their antibacterial applications and image of silver particles coated onto halloysite.

Silver is a well-known antimicrobial metal. The vacuum loading and grafting of silver on/in modified clay nanotubes are common procedures, starting from [28].

Ag-nanorods were also synthesized inside the lumen of halloysite by thermal decomposition of silver acetate loaded from an aqueous solution [32]. Encasing silver inside the nanotubes allowed the prevention of colour changes in Ag-halloysite doped white paint, while the direct addition of silver nanoparticles converted the coating to a yellow-grey color. In [33], the dispersion of halloysite in a silver salt solution was kept in a vacuum for five cycles, followed by reduction with curcumin. Curcumin is not only a reducing agent, but it also possesses antibacterial activity against gram-positive and gram-negative bacteria. To enhance loading efficiency, an acid treatment of halloysite was used, creating new sites for metal cluster formation inside the tube’s lumen [34].

Modification of clay outer surfaces is another efficient way to decorate them with nanoparticles. In order to get the modified halloysite nanotubes loaded with silver nanoparticles, a series of reactions—including in situ polymerization—were suggested [35]. First, [3-(2-aminoethyl)aminopropyl trimethoxysilane (KH-792 silane) was bound to halloysite, followed by double-bond grafting using acryloyl chloride. Then poly(4-vinylpyridine) was formed on the surface using in-situ polymerization, with a final Ag attachment. A similar approach was proposed for Ag nanoparticles, where KH-792 silane was used as a complexation agent for ions [36]. The average diameter of particles formed after reduction was 5 nm. These materials showed good antibacterial activity against gram-negative bacteria (E. coli) and gram-positive bacteria (S. aureus).

In [37], chitosan was used to immobilize silver nanoparticles on halloysite because it is a good complexation agent that contains nitrogen atoms for binding silver ions through electron pair sharing. Chitosan helps to prevent the leaching of silver ions into the media. To graft chitosan, the surface of the halloysite was modified with 1,6-hexamethylene diisocyanate. Silver nitrate was used, and after the reduction of the silver–chitozan complex, silver nanoparticles of about 5 nm were observed on the tube’s surface. It is also possible to produce silver particles by wet impregnation on aminosilane-modified halloysite [38]; though the particle size distribution is broad and not many particles are attached, this procedure is one of the simplest.

In [26], ZnO nanoparticles were deposited on the outer and inner surfaces of halloysite nanotubes using a solvo-thermal method, and then incorporated into a polylactic acid matrix to give an antimicrobial membrane. Zinc oxide particle formation on clay tubular templates was also investigated in [39]. ZnO-Ag/halloysite composites for antibacterial applications were synthesized using thermal decomposition of zinc salt, followed by the reduction of the silver ions with NaBH4 [40]. CuO, TiO2, and Au nanoparticles were synthesised, exploiting halloysite surfaces as templates for the formation of metal nanoparticles and nanoclusters with tuneable properties [27].

More
© Text is available under the terms and conditions of the Creative Commons Attribution (CC BY) license (http://creativecommons.org/licenses/by/4.0/)
Upload a video for this entry
Information
Subjects: Nanoscience & Nanotechnology
Contributor MDPI registered users' name will be linked to their SciProfiles pages. To register with us, please refer to https://encyclopedia.pub/register :
Anna Stavitskaya
View Times: 49
Revisions: 2 times (View History)
Update Time: 23 Jun 2021
Table of Contents
1000/1000
Hot Most Recent