Submitted Successfully!
Thank you for your contribution! You can also upload a video entry related to this topic through the link below:
https://encyclopedia.pub/user/video_add?id=10873
Check Note
2000/2000
Exosome Traceability and Cell Source
Edit
Upload a video
This entry is adapted from 10.3390/ijms22105346

Exosomes are nanostructural vesicles with a size range of 30–150 nm that have gained increasing attention over the past few years. They have endocytic origin, the endocytic compartment membrane, the plasma membrane, and cytosol contain all exosomal proteins. Exosomes have not been found to contain proteins of the mitochondria, nucleus, endoplasmic reticulum, or Golgi apparatus.

1. The Interaction of Cancer Cell-Derived Exosomes with Tumor Cells and Normal Cells

Cancer cell-derived exosomes (CDE) have been proven to have several functions in tumor progression. However, the actual mechanism following their transportation is not clear yet [1]. One study investigated the cellular uptake of the human exosome U251exo by different types of tumor cells and astrocyte cells [2]. Researchers have demonstrated that U251exo were taken up by human brain cancer cells (U251-MG), human breast cancer cells (MDA-MB-231), and human fibrosarcoma cells (HT-1080), as well as, to a lesser extent, by human astrocytes cells, as shown in Figure 1. The protein ligands were independent in this type of communication, while the lipid components were dependent. U251exo was highly enriched with phosphatidylethanolamine, a unique lipid component of U251exo that facilitated its interaction with the U251, MDA, and HT among astrocytes.

Figure 1. Effective uptake of U251-MG (U251) cell-derived exosomes (U251exo) by their parental cells and other cancer cell lines. (A) U251 cells, MDA-MB-231 (MDA) cells, HT-1080 cells, and AST were treated with U251exo for 12 h (bar 50 μm). (B) Green fluorescence intensity per cell area was determined by image analysis [2]. Figure and caption reproduced with permission from Elsevier.
CDE can affect both their immediate environments and distant targets; they can even promote tumor progression by changing non-cancerous cells around the tumor microenvironment [3]. CDE can also send anti or pro-tumor signals to immune and nonimmune cells, thereby altering their functions. The ways in which CDEs reprogram cells include uptake by the recipient cells and/or cell surface signaling [3]. Several studies have explained that tumor extracellular vesicles (EVs) enhance tumor cell migration but hamper lymphocyte migration [3][4]. Other researchers have demonstrated that human glioblastoma-derived exosomes can interact with normal human astrocyte cells and change their local environment by promoting cytokine production and astrocyte cell migration (Figure 2), causing tumor-like phenotypic changes in the normal astrocyte cell population [5]. 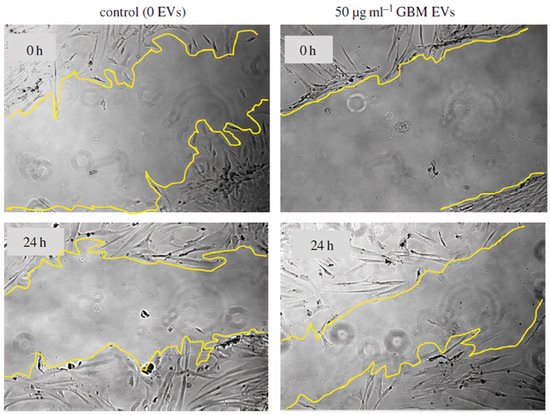 Exosomes secreted by immune cells could be crucial for communication between cells [6]. Several studies have been done to determine the effect of exosome source on cell-cell communication and immune response [7][8]. Herein, we will describe the effect of exosomes derived from immune cells on immune cell stimulation. In addition, we will explain the effect of exosome source on their uptake by immune cells. Exosomes derived from human dendritic cells (DCs) carry functional MHC class I and class II molecules that can be used to activate T-cells, thus increasing interest in using DC-derived exosomes in cancer clinical trials [9][10]. Researchers have isolated exosomes from live human primary DCs and studied their impact on CD4+T lymphocytes in vitro. One study showed that DC-derived exosomes induce T-cell activation by inducing the release of Th1 cytokine IFN-γ. First, the researchers tested the uptake of exosomes by T-cells. Then, they monitored the activation of T-cells by measuring the up-regulation of the early T-cell activation marker CD69. In both studies, they compared the exosomes with other types of EVs. Inducing IFN-γ secretion by Th lymphocytes is a sign of immune response that is expected to be effective in anti-tumor immunotherapy [9]. In another study, researchers proved the selectivity of exosomes to the target cells based on their origin by adding mesenchymal stem cell (MSC)-derived exosomes to MSCs and monocyte cells. The MSC-derived exosomes were taken up by MSCs rather than monocyte cells [11]. These studies confirm that exosome-cell interaction is source dependent. This is a very important feature that makes exosomes suitable bio-nano-agents for targeting and treating different diseases.

3. The Interaction of Normal Cell-Derived Exosomes with Tumor Cells

Multiple studies have proven that macrophage-derived exosomes can keep the topology of plasma membrane proteins and evade being taken in by mononuclear phagocytes, which is important in the treatment of tumors [10]. Macrophage-derived exosomes have been utilized to target tumor cells. Researchers studied the effect of the integrin protein on exosome-cell interaction by delivering drug-loaded exosomes to different types of tumor cells, such as HeLa and MCF7, and normal (non-tumor) cells (NIH-3T3, 293T, and MCF-10A). The macrophage-derived exosomes accumulated on the HeLa cells, which highly express ανβ3+ and FR+, more than the other tumor cell type (MCF7 are ανβ3- and FR-) and the normal cells Figure 3 [10]. Additionally, tumor cells’ uptake of exosomes derived from human placental MSCs was investigated, and the results showed that exosome uptake was selective depending on their source due to the exosomal envelope that maintains the identity and compatibility of transference. This research proved that MSC exosomes are taken up more by MSCs than by tumor cells. Exosomes released from the same cell type share a certain signature, which is also found in their parent cells [11]. 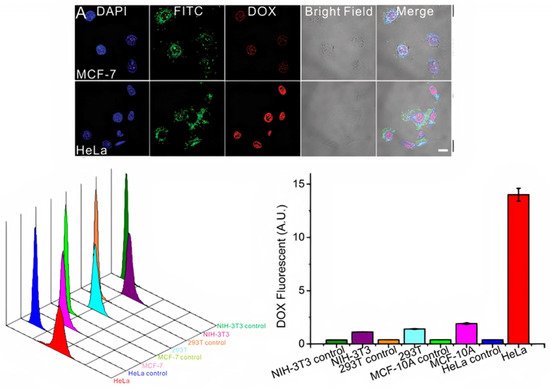 4. The Interaction between Exosomes and the Nervous System

It is believed that exosomes secreted by neural cells play a major role in neurodegenerative diseases [12]. Several studies proved that exosomes can regulate neuroinflammation, significantly impact the treatment of particular neurological diseases, and promote neurogenesis and neurogenic physiological location [12][13]. Exosomes from nerve cells are also specific in their intracellular communications. Researchers showed that neuroblastoma exosomes bind randomly to rat hippocampal cells and glial cells and could only be endocytosed by glial cells (Figure 4A–C). Briefly, GFP-CD63 exosomes purified from N2aGFP-CD63 cells were incubated with hippocampal cells (14 DIV) stained with anti-MAP2 to detect neurons, anti-GFAP to detect astrocytes, anti-O4 to detect oligodendrocytes, and anti-Lamp-1 to stain the late endosomes. Neuroblastoma exosomes attached to the surface of neurons, astrocytes, and oligodendrocytes without any specificity. While the anti-Lamp-1 co-staining showed the neuroblastoma exosomes inside Lamp-1-positive late endosomes of oligodendrocytes or astrocytes, the exosomes were not present within Lamp-1-positive compartments of neurons. In contrast, stimulated rat cortical neuronal exosomes were bound and endocytosed by neurons only, as explained in Figure 4D–F. In this part, GFP_TTC exosomes released by rat cortical neurons over synaptic activation were added to rat hippocampal cells (14 DIV) stained with anti-MAP2 to detect neurons and anti-GFAP to detect astrocytes. The exosomes strongly attached to MAP2-positive soma and dendrites and did not attach to MAP2-negative cells and GFAP-positive astrocytes. Rat hippocampal neurons incubated with rat cortical neurons were immunogold-stained against GFP to show the presence of single or aggregated exosomes on the surface of the neuron [14]. It is clear from these studies that neuronal cells can uptake different types of exosomes, but the effect of this uptake on neuron physiology is still under investigation. 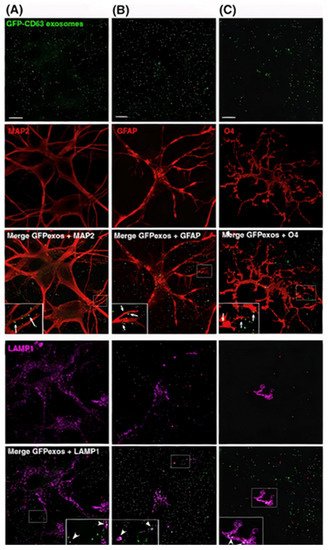 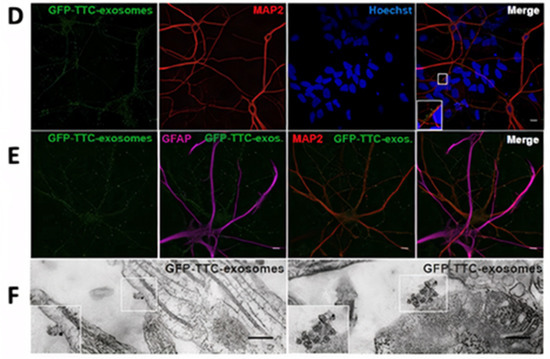 Figure 4. Neuroblastoma exosomes carrying GFP-CD63 bind to and are endocytosed by neurons and glial cells. (A) MAP2, (B) GFAP, and (C) O4 to label neurons, astrocytes, and oligodendrocytes, respectively, and with antibodies against Lamp-1 (A–C) to stain late endosomes and lysosomes. (D–F) Neuronal exosomes bearing GFP_TTC bind specifically to neurons [14]. Figure and caption reproduced with permission from John Wiley and Sons.
A study by Fröhlich et al. showed that administration of mouse oligodendroglial derived exosomes to mouse primary cortical neurons improves their action potential firing rate, modifies cellular signal transduction pathways, and alters their transcriptome. The researchers cultured a mouse primary cortical neuron on MEA chips (six wells, nine electrodes per well) for 14 days to create a circuit of neurons and cause spontaneous electrical activity. One hour after recording started, primary oligodendroglial-derived exosomes were added. The recording showed that after the exosomes were added, the relative spike amplitude did not change, but the relative firing rate instantly significantly improved (Figure 5c) and the relative burst index was moderately reduced (Figure 5d). These results confirm that oligodendrocyte-derived exosomes keep up the energy metabolism of neurons, causing an increase in the firing rate. These results also confirmed the finding about microglia-derived EVs working at the presynaptic site of the excitatory synapse by improving the release probability of synaptic vesicles throughout the metabolism induction of sphingolipids [15]. 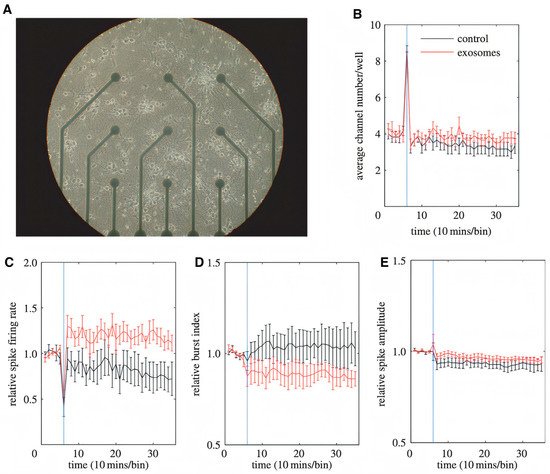 Figure 5. Impact of oligodendroglial exosomes on neuronal electrical activity. (A) Image of a 14 DIV pCN culture grown in a 9-channel MEA. Electrode spacing is 200 mm. (B–E) Recordings were performed at DIV 14. The blue vertical line indicates the application of pOL exosomes (red graph, n ¼ 9) or sham control (black graph, n ¼ 6) after 1 h of recording. Average channel number/well (B), relative spike firing rate (C), relative burst index (D), and relative spike amplitude (E) are depicted over 6 h of recording. Error bars+s.d. (* p, 0.05; Student’s t-test) [15]. Figure and caption reproduced with permission from Royal Society.
Previous work explained the effect of exosomes on neuron physiology and how exosomes increase the firing rate of neurons. Research has also shown how other sources of exosomes influence regeneration in the peripheral nervous system, as reported by Lopez-Verrilli et al. In this work, the researchers studied the effect of exosome source on axon regeneration. This was proved by adding exosomes derived from Schwann cells and fibroblast cells to dorsal root ganglia cells (DRGs). Exosomes derived from Schwann cells improved axonal regeneration through a local working on axons and inhibited RhoA and GTPase activation in growth cones (Figure 6). In contrast, exosomes derived from fibroblasts had no effect on axon regeneration. This study demonstrated that the content and composition of exosomes should be cell-specific to improve axonal regeneration [16]. 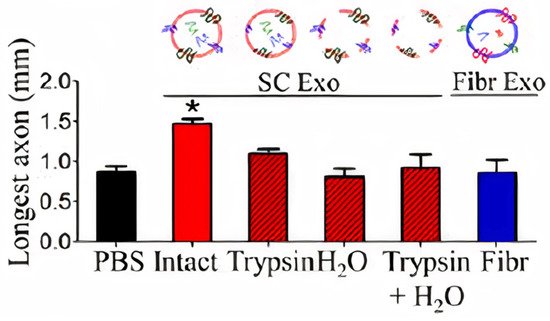 More
© Text is available under the terms and conditions of the Creative Commons Attribution (CC BY) license (http://creativecommons.org/licenses/by/4.0/)
Upload a video for this entry
Information
Subjects: Biology
Contributor MDPI registered users' name will be linked to their SciProfiles pages. To register with us, please refer to https://encyclopedia.pub/register :
Rabab Hamzah
View Times: 85
Revisions: 3 times (View History)
Update Time: 16 Jun 2021
Table of Contents
1000/1000
Hot Most Recent