Submitted Successfully!
Thank you for your contribution! You can also upload a video entry related to this topic through the link below:
https://encyclopedia.pub/user/video_add?id=10335
Check Note
2000/2000
Traditional Bulgarian Dairy Products
Edit
Upload a video
This entry is adapted from 10.3390/microorganisms9030480

Dairy products are nutritionally indispensable, consumed daily and one of the most desired foods by a large part of the world population.

Fermented milk is very useful for many reasons. The related products have a prolonged shelf life; they are safe because lactic acid bacteria (LAB) act as preservatives and inhibit the development of pathogenic microflora, they are extremely suitable for the absorption of nutrients from milk, and they are beneficial due to the health impact of lactic acid bacteria on various body functions [1].

According to Rul (2017), traces of fermented milk products (milk lipids discovered on clay vessels) have been found as early as 8000 B.C. in Asia Minor and Eastern Europe, soon after the domestication of milk-producing animals (cows, sheep, and goats) [2]. Evidence of kefir consumption was found in China in a Bronze Age tomb [3]. The first dairy products resembling yoghurt were invented around 5000–6000 B.C. in Mesopotamia [1]. Located on the Balkan Peninsula, between Western Europe and the Middle East, at this time the Bulgarian lands were inhabited by various ancient communities, with their typical material culture including fermented food traditions. The climate in Bulgaria is especially suitable for animal dairy husbandry. Bone fragments, collected from Azmashka Neolithic village (near Stara Zagora, 6000 B.C.), belonged to 118 cattle, 73 sheep, and 27 goats [4]. Historians believe that the Thracian tribe Bizalti (who inhabited today’s lands of Shumen, Targovishte and Varna) were the first to start purposefully preparing fermented dairy products [5]. Another direction in the search for the origin of lactic acid dairy fermentation is offered by the descriptions of the Greek historian Herodotus, according to whom the Scythians (nomadic tribes living between the rivers Dnieper and Don) consumed sour milk. Mare’s fermented milk was also used by the proto-Bulgarians for food, and stored in leather bags made of stomachs. The resulting product was called koumiss and was a staple food during military campaigns. The Slavs are known to have consumed sura, a product obtained by placing yoghurt in wooden barrels in the summer and consuming it in the winter by liquefying it with drinking water. When the ancient Bulgarians rediscovered sheep’s yoghurt used by the Thracians and Slavs, it became preferable to mare’s milk. The observation that fermented dairy products are beneficial for human health dates back to their invention since it is described in Indian Ayurvedic scripts from about 6000 B.C. [6]. In Europe, the healing effects of Bulgarian yoghurt have been known since at least 1542, when the French King Francois I was cured of chronic diarrhoea by a simple yoghurt diet [2]. However, the discovery of yoghurt microbiota (as a cause of yoghurt fermentation) happened only in the 20th century. In 1905, Stamen Grigorov, a Bulgarian medical student in Geneva, Switzerland, was the first to describe the rod-shaped lactic acid bacterium (named Bacillus bulgaricus Grigoroff), accompanied by a spherical Streptococcus, in Bulgarian yoghurt [7]. Based on Grigorov’s findings, in 1909 the Russian biologist and Nobel Prize winner Elie Metchnikoff, developing his theory about the prolongation of life, was the first who proposed that daily yoghurt consumption engenders the longevity of the Bulgarian peasant population, especially in the mountainous regions. Metchnikoff suggested that there is a connection between the consumption of yoghurt and the number of Bulgarian centenarians. He further proposed the hypothesis that the inhibition of harmful food fermentation in the gut can delay the process of ageing. At the heart of his research is lactic acid, which reduces the number of putrefactive microorganisms [7][8]. Then, the benefits of yoghurt consumption were widespread in Europe by doctors, pharmacologists and journalists, which led to a general demand for yoghurt as a medicine in the first third of the 20th century, for instance, against “food neophobia” and other gastrointestinal disorders. In the period 1909–1912, physicians and bacteriologists Guéguen, Bulloch, Vaughan, Hertz, and Lane independently of each other discussed the therapeutic nature of the “lactic acid bacillus”, and as a result, Danone’s company distributed its yoghurt through the city pharmacies of Barcelona in 1912, followed by entering the French yoghurt market in 1923 [7]. Today, more than 45 bln metric tons (MT) of fresh dairy products are consumed annually in Europe. In 2019, 6.4 bn MT of cheese and 6.1 bn MT of yoghurt were produced by the countries of the European Union. Bulgarian dairies processed 663,644,000 L of raw milk in 2020, 94.3% of which was cow’s milk. In comparison to the other EU countries, the obtained genuine yoghurt (156,610 MT) and white brined cheese (899 MT) in Bulgaria were in limited quantities, but they are known for their very high quality [9].

Genuine Bulgarian yoghurt contains a starter culture consisting of L. delbrueckii ssp. bulgaricus and S. thermophilus. Their proto-cooperation was comprehensively reviewed in several studies [10][11][12][13]. Briefly, L. bulgaricus, which is a bacterial species with high proteolytic activity, releases free amino acids that favour the growth of S. thermophilus. On its own, S. thermophilus engenders rapid acidification and diminishes the levels of dissolved oxygen in milk, thus improving the culture conditions for its symbiotic partner. Lactose is the main carbon source for LAB growth in milk, and different species have developed various mechanisms to transport and utilize it. Figure 1 shows the routes of lactose conversion to lactic acid and other volatile compounds contributing to the unique flavour of dairy foods. 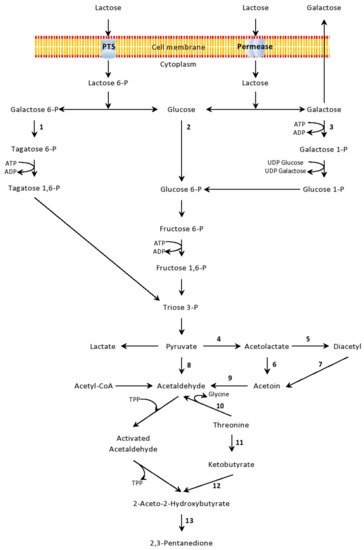 Figure 1. Schematic presentation of lactose transport, metabolization routes and formation of volatile compounds by lactic acid bacteria (LAB) in dairy foods, according to Rul (2017), and Solopova et al. (2012) [2][14]. Designations: 1, tagatose 6-phosphate pathway; 2, glycolysis; 3, Leloir pathway; 4, acetolactate synthase; 5, oxidative decarboxylation; 6, acetolactate decarboxylase; 7, diacetyl reductase; 8, pyruvate decarboxylase; 9, acetoin dehydrogenase; 10, threonine aldolase; 11, threonine deaminase; 12, acetolactate synthase; 13, oxidative decarboxylation.
Two forms of lactose can be introduced into the cell, unphosphorylated or phosphorylated. The first engages the transporter lactose permease LacS. Inside the cell, the enzyme β-galactosidase hydrolyses lactose to glucose and galactose [15]. Depending on the LAB species, lactose transport is coupled to proton symport or galactose antiport [2]. L. bulgaricus and S. thermophilus release the galactose moiety of lactose into the medium, whereas Leuc. lactis, Lactococcus ssp., and many Lactobacillus ssp. metabolize it. Glucose is metabolized via glycolysis, whereas galactose, depending on the particular LAB, follows either the tagatose 6-phosphate or the Leloir pathway [16][17]. Other LAB, such as starter lactococci, L. paracasei, L. casei, and L. plantarum, import lactose exclusively by lac-PTS—the phosphoenolpyruvate (PEP)-dependent phosphotransferase system. In this way, lactose is translocated and phosphorylated simultaneously with PEP as the first phosphoryl donor. After translocation, lactose is hydrolysed to glucose and galactose-6-P; glucose enters the glycolytic pathway through phosphorylation by glucokinase, whereas galactose-6-P is further metabolized via the tagatose-6-P pathway. However, pyruvate, aspartate and aromatic amino acids are the key metabolites needed for the production of the wide spectrum of volatile compounds contributing to the specific aroma of dairy foods [18][19]. As for Bulgarian yoghurt, its sour smell is associated with high amounts of lactic acid, but the overall flavour is also influenced by acetaldehyde, acetoin, diacetyl, and 2,3-pentanedione [20].
When artisanal yoghurt is prepared, it contains rich autochthonous LAB microflora. According to Velikova et al. (2018), 53% of the LAB strains isolated from homemade yoghurts belong to L. bulgaricus, 14% to other lactobacilli, and 32% to lactic acid cocci (S. thermophilus, Pediococcus acidilactici, Lactococcus lactis, Enterococcus faecium). In Table 6 are shown the most common lactobacilli in Bulgarian yoghurt, which are L. helveticus, Lacticaseibacillus paracasei, Limosilactobacillus fermentum, and Lacticaseibacillus rhamnosus; several strains of Leuconostoc mesenteroides, Leuc. pseudomesenteroides, and Weissella confusa were isolated from yoghurt as well [10].
Regarding white brined cheese, the starter culture usually contains Lc. lactis subsp. lactis and Lacticaseibacillus casei, L. bulgaricus and S. thermophilus. The majority of non-starter LAB are mesophilic lactobacilli such as Lactiplantibacillus plantarum, L. paraplantarum, L. pentosus, L. paracasei subsp. paracasei, Lentilactobacillus hilgardii, and L. brevis (Table 1). Most of them are salt- and acid-tolerant facultative anaerobes, which grow well in cheese as their number reaches up to 109 CFU/g during ripening [21]. Other authors report an extremely large amount of LAB, up to 3.7 × 1010 CFU/g, observed in white brined cheese produced by a small family farm near Dryanovo, Bulgaria [22]. Four different strains of L. plantarum, Pediococcus spp., Enterococcus spp., and Leuconostoc spp. with probiotic properties have been isolated from Bulgarian home-made brined cheese [23]. Four bacteriocinogenic strains of Ent. faecium have been isolated and identified from Bulgarian home-made white brined cheese, and the authors propose to use them as preservatives in the production of dairy products [24]. The species Ent. faecium and Ent. durans are used as adjunct culture in the manufacture to accelerate the proteolysis of β-casein and αs1-casein [21].
Kashkaval microflora was recently described by Teneva-Angelova et al. (2018) [25]. The main starter cultures used in its production include the mesophilic Lc. lactis ssp. lactis and Lc. lactis ssp. cremoris, and the thermophilic L. bulgaricus, L. helveticus, and S. thermophilus. A broad spectrum of other species has been isolated from artisanal samples contributing to their flavour: Leuc. mesenteroides, L. lactis ssp. lactis biovar. diacetylactis, and Enterococcus spp. [26][27].
The study of Tserovska et al. (2002) showed that 18 different LAB strains can be isolated from home-made katak. Nine of them belonged to the lactic acid cocci (P. acidilactici, P. pentosaceus); the others—to L. delbrueckii ssp. bulgaricus, L. delbrueckii ssp. delbrueckii, and L. delbrueckii ssp. lactis) [28]. The predominance of lactic acid cocci in homemade cheese and katak was reported by Kirilov et al. (2011). From 110 identified LAB strains, 58 belonged to genus Enterococcus, 20 to Streptococcus spp., 11 to Lactococcus spp., and only 21 were identified as Lactobacillus spp. [29]. Typical for kefir are LAB species, L. kefiranofaciens, Lentilactobacillus kefiri [30], Lentilactobacillus buchneri [31], L. plantarum [30], and the yeast species Kluyveromyces marxianus [32], Kazachstania unispora [33], Dekkera anomala [34], and several species of the genus Saccharomyces [35]. Koumiss is fermented mainly by LAB species, L. acidophilus, L. helveticus, Ligilactobacillus salivarius, L. buchneri, L. plantarum [36], S. thermophilus, and Leuconostoc spp. [37], and yeasts Torula kumiss, Saccharomyces lactis, Sacch. unisporus, and Kluyveromyces lactis [38][39].
Table 1. The microbial content of traditional Bulgarian dairy foods and beverages.