Submitted Successfully!
Thank you for your contribution! You can also upload a video entry related to this topic through the link below:
https://encyclopedia.pub/user/video_add?id=10320
Check Note
2000/2000
Tannery Wastewater
Edit
Upload a video
This entry is adapted from 10.3390/molecules26113222

Currently, there are various industrial processes that contribute to the deterioration of water quality; most require the use of highly polluting substances for terrestrial and aquatic ecosystems; therefore, it is imperative to apply a treatment before its discharge in different water bodies. The tanning sector allows the transformation of degradable animal leather into non-degradable leather by eliminating impurities and unnecessary materials [1]; however, this process generates different residues that represent a significant environmental problem, requiring specific treatments, which are expensive and inaccessible in many developing countries. [2]. In the global context, Asia together with Latin America and Europe are the main leather producers in the world [3][4] (Figure 1). It is estimated that the budget of this business in Europe is approximately 8 billion euros per year, due to the more than 3000 companies that employ 50,000 people, demonstrating their competitiveness in the global market [5]. In recent years, Latin America and Africa have increased the annual growth rate given the consumption of leather in these places [3]. Italy is the main leather producer on the European continent, owns 60% of the companies and exports more than 70% of the total production in Europe; it owns 15% of the world leather production, and in the European Union, it is the main producer with 65% of the total manufacture. [6]. In Latin America, Brazil and Argentina stand out in this sector; they have a significant number of emerging companies with great competitiveness in the market, exporting their products to countries such as China, Hong Kong, Vietnam and the United States. Globally, Colombia represents 5% of the tanning industry production, and in the Latin American context, it ranks 6th as a producer in this industry [5]. 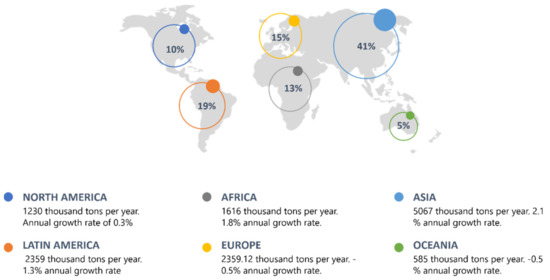 Figure 1. Global context of the leather industry.
Leather production consumes on average 10–25 m3 of water in its different stages and can generate on average 8 to 20 m3 of wastewater; this flow may vary depending on the technological development of each industry. According to Nagi et al. [2], this resource is used to transport chemical products from diffusion and in the phase of washing and extraction of undesirable compounds from the leather [7]. In this process, large amounts of wastewater are generated, significantly altering the quality of the water since they not only contain biodegradable compounds such as fats, proteins and carbohydrates, but also polluting compounds such as solvents, additives and toxic heavy metals typical of the process [8]. At least 90% of industries are reported to use basic chromium sulfate as a tanning agent [9][10], chromium (Cr) being one of the most toxic metals used in tanning and, without prior treatment, is released in effluents in toxic concentrations. The regulations of the World Health Organization (2020) recommend a reference value of 0.05 mg/L of total chromium in drinking water; above this concentration, it can exert a genotoxic and carcinogenic effect. High concentrations of chromium (VI) cause the deterioration of ecosystems and have an impact on human health as they cause kidney damage, liver damage, chronic bronchitis, nasal irritation, cancer, and DNA damage among other things [11][12]; these effects have led governments to apply stricter regulations and promote effective treatments to reduce the risk of contamination. Over the years, various techniques for treating tannery wastewater have been studied, focused on the removal of pollutants, particularly chromium. Some of these technologies are chemical coagulation, photodegradation, biodegradation, adsorption, ozonation, electrocoagulation and reverse osmosis [13]; however, the difficulty of implementing them is related to high energy consumption, use of large areas of land, high operation and maintenance costs [14]; in the same way, in some processes, other polluting byproducts are generated [15]. The foregoing has launched various biotechnological processes, including the use of microalgae, bacteria and fungi, as sustainable and economically affordable alternatives [16].
In recent years, microalgae and cyanobacteria have been proposed as a sustainable solution for the removal of nutrients and hazardous materials from wastewater [17][18][19][20]. In relation to the treatment of wastewater from tanneries, studies with various strains are still limited, the most common being Scenedesmus sp. and Chlorella sp., obtaining positive and promising results [2]. Microalgae have exhibited high tolerance to adapt in this environment, as well as an important role in reducing contaminants. The biomass of the microalgae has shown an absorbent capacity during the chromium elimination process, obtaining important results with Chlorella vulgaris, where a reduction of Cr(VI) to Cr(III) was also observed, going from a highly toxic compound to one less toxic, also attributing it to biological (enzymatic pathway) and non-biological mechanisms (glutathione releasing) [21]. Likewise, the use of residual biomass from the process is a way to maximize production of energy (biofuels) and generate byproducts of commercial interest (pigments, lipids, etc.), reducing the costs of the process [22][23][24][25][26][27][28][29]. Various studies have been carried out to identify the advantages of using microalgae in tannery waters. In India, one of the three largest leather producers after China and Italy, high concentrations of Pb, Cr, Zn and Cu were found, and an efficiency of 60–98% of removal of these metals under different conditions was demonstrated, specifically with microalgae [30]. In Brazil, progress has been made regarding the growth of microalgae consortia under different concentrations of tannery wastewater [16].

2. Technologies for the Treatment of Tannery Wastewater

The main technologies for the treatment of tannery wastewater focus only on certain parameters [31], as there is great difficulty in finding a treatment that completely reduces the pollutant load. Figure 2 presents a graphical description of the most common technologies. Since chromium is the main problem in this process, most treatments for these waters focus on the reduction and reuse of this element, followed by treatment for COD, BOD and TDS. These technologies include chemical coagulation processes [32][33] electrocoagulation [34], absorption, advanced oxidation processes [35] and biological processes such as phytoremediation [13][14]. 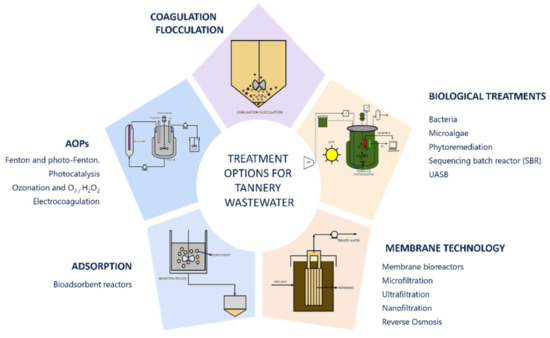