WO3 and Ionic Liquids -1

Although only recently ILs started to be used to enhance the performances of metal oxides based electrochemical gas sensors (with reference, in particular, to WO3 based sensors), the recognition of their role has been clearly asserted. In fact, not only ILs heavily influence the structure of WO3 nanoparticles when used in the synthetic step (nanoplates, nanorods, nanospheres, etc.), but their residues eventually present on nanoparticles surface can improve the sensed gas adsorption, thus yielding better performances.

1. WO3 and Ionic Liquids in Pollutant Gas Sensing

Air quality assessment is one of the main tasks of recent (and future) years. In fact, “Air pollution kills an estimated seven million people worldwide every year. WHO data show that 9 out of 10 people breathe air containing high levels of pollutants. WHO is working with countries to monitor air pollution and improve air quality” [1]. In particular, air pollution can be divided into two different categories (based on ambient and pollution source): indoor and outdoor. Indoor (household) air pollution is mainly due to incorrect fuel utilization (in cooking or stoves), while outdoor (ambient) air pollution has a larger number of sources [2]:

It is thus evident that cheap, light, easy-to-use, non-polluting and/or recyclable gas sensors are the topic of current research [3][4]. One of the main differences between indoor and outdoor gas sensing is the very different level of humidity of these two ambients, very high outdoor and controllable indoor. High levels of humidity can compromise the operations of the sensor devices [4].

Many are the materials used in air pollutant sensors, and among them semiconducting metal oxides are very popular [5]. In particular, WO3, due to its peculiarities, is often used as sensor material [6][7][8][9].

More recently, in order to enhance the performance of WO3 sensors, ILs have been used both in the WO3 production process (i.e., incorporating ILs in WO3 structures or influencing such a structure) and in the sensor device construction process (i.e., incorporating ILs in the device). In both cases better performances were obtained in comparison to the same sensors obtained without using ILs.

The effect of the nature and amount of imidazolium ionic liquids on the morphology of the produced nanoparticles was evidenced, and a hypothesis of mechanism was reported. In all cases, starting from WCl6 as tungsten source and after calcination, monoclinic WO3 was obtained, in pure form and well crystallized, but in the absence of IL, nanoplates were obtained (1 hundred nm size), while in the presence of CMImCl nanorods (30 nm diameter), and in the presence of BMImCl, spheres (1500 nm size, formed by subunits of 40 nm size) were obtained. The morphology of produced nanostructured WO3 not only depends on the nature of the substituents on the imidazolium cation (butyl or carboxymethyl), but also on the amount of IL. In fact, in the case of CMImCl, only an equimolar amount of IL (with respect to WCl6) led to the formation of nanorods, while increasing the IL amount led to irregular particles being formed. Using BMImCl (butyl group on the imidazolium cation), the situation was the opposite: an equimolar amount of IL led to the formation of irregular particles, while an excess of IL yielded nanoparticle-constructed spheres.

The authors suggested that in the case of CMImCl, the IL can be selectively adsorbed on the surface of crystals, thus leading to an alteration of the anisotropic growth process. In the case of BMImCl, the hypothesis is that this IL can act as a template for the growth of nanospheres. The spheres, once formed, aggregate by different kind of interactions (electrostatic, hydrogen bonding, π-π stacking), yielding the nanoparticle-constructed spheres.

The produced WO3 nanoparticles were used in conductimetric sensors for the detection of various pollutant gases (ethanol, methanol, isopropanol, ethyl acetate, toluene); the optimal temperature of the sensors was 240–300 °C, with short response (3–25 s, depending on the analyte and its concentration) and recovery times, and with 5 ppm as the lower detection limit.

Furthermore, Cheng and coworkers reported the use of an imidazolium IL (1-butyl-3-methylimidazolium tetrafluoroborate) in the process of WO3 nanoparticle formation [10]. The nanoparticles were characterized using IR, XPS and XRD analyses. The produced nanoparticles were tested in a NO2 electrochemical sensor, showing enhanced properties with respect to the corresponding WO3 nanoparticles sensor in which no IL was used. The authors suggested that the better performances could be due to residue IL on the surface of the particles, with increased oxygen adsorption. The lower detection limit was 0.1 ppm, with a very high selectivity towards NO2 (in the presence of ethanol, nitrobenzene, acetone, ammonia, carbon dioxide, etc) at the noteworthy low temperature of 50 °C. The reaction is the adsorption and reduction of NO2 (outlined in Figure 1), which, in the presence of oxygen, yields NO3−, followed by the formation of a superoxide anion. This process traps electrons from WO3 particles, leading to an increase of sensor resistance. 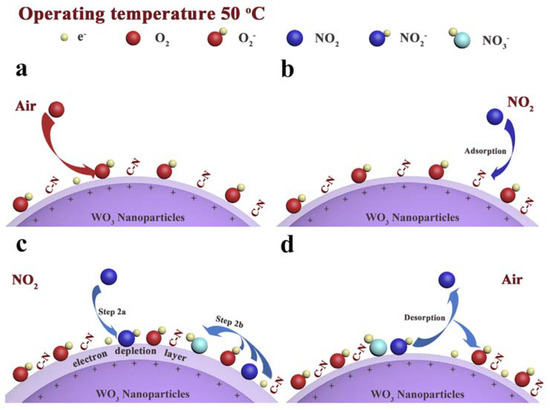 As previously stated, outdoor gas detection suffers from high humidity levels, which in most cases lower the sensor performances. ILs can overcome (in part) this problem, as reported by Bendahan and coworkers, regarding a WO3 sensor for aromatic volatile compounds (benzene, toluene, ethylbenzene and xylenes) . A cheap and reliable removable filter, based on common imidazolium ILs, was englobed into the sensor, with no loss in sensitivity and selectivity, for the efficient removal of most of the humidity, with significant improvement of the sensor performances, as reported in Figure 2.

Mahmoud and coworkers reported the use of WO3 nanoparticles, obtained using a sol-gel method and glycerol IL, as components of a flexible poly-vinyl alcohol (PVA) membrane inserted between the two electrodes of a portable H2S electrochemical sensor [12]. Along with excellent reproducibility of the results and long-term stability, the best operation temperature was quite low (80 °C), with a reasonable response time (19.1 ± 3.4 s). This result is quite significative, as the majority of metal oxide-based sensors operate at higher temperatures (200 °C or higher). The detection limit of this sensor was 10 ppm of H2S, also in the presence of noteworthy amounts of interferents (H2, C2H4), as reported in Figure 3. 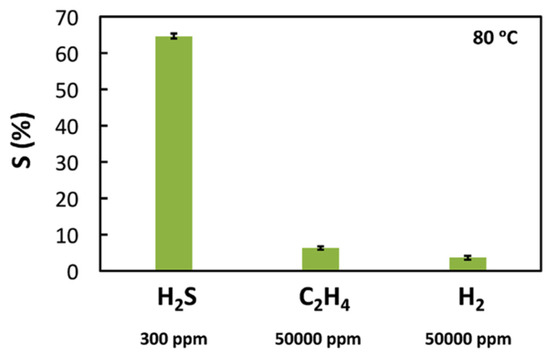 Figure 3. Selectivity of a WO3 nanoparticles-glycerol IL-based H2S sensor when exposed to H2S, H2 and C2H4 at 80 °C. Reproduced with permission [12]. Copyright 2017, Elsevier.

This electrochemical sensor is based on electrochemical reduction of H2S in the presence of adsorbed oxygen, generating SO2. The same authors reported an improvement of the H2S sensor using chitosan instead of poly-vinyl alcohol (PVA) in the flexible membrane (containing WO3 nanoparticles and IL), obtaining an electrochemical sensor less humidity dependent and working at the very low temperature of 40 °C [13]. In this case, the cooperation of WO3 nanoparticles, adsorbed oxygen, IL and chitosan seems to allow better results, as depicted in Figure 4.

Figure 4. Participation of all sensor components in H2S detection at 40 °C. Reproduced with permission [13]. Copyright 2020, Elsevier.

The possibility of using a common imidazolium IL (EMIm-BF4) in a conductimetric CO2 gas sensor was recently reported by Daves and Ersoez [14]. In particular, the authors exploited the properties of organic IL, while combining them with the mechanical stability of inorganic compounds. The electrochemical sensor was formed using an ionogel (obtained by the combination of the IL and an inorganic porous host) deposited over WO3. The very good performances of this kind of sensor are due to the permeability to CO2 of the ionogel layer (also compared to pure IL, due to the high enhancement of the surface for the presence of the porous inorganic host).