The field of medical nanotechnology has emerged as an innovative and a powerful tool for treating some of the most complicated health conditions. Different inorganic nanomaterials including gold, silver, and others have showed potential antibacterial efficacies. Interestingly, gold nanoparticles (AuNPs) have gained specific attention, due to their biocompatibility, ease of surface functionalization, and their optical properties.

Bacterial resistance, one of the biggest threats to human health in the 21st century, is the ability of bacterial cells to resist one or more types of antibiotics [1]. Infections like pneumonia and tuberculosis are becoming harder to treat because the available antibiotics are becoming less effective due to rising bacterial resistance [2][3]. The decline in the development of new antibiotics, along with their overuse and misuse, has made the situation even worse. All this is leading to protracted hospital stays, higher medical costs, and a rise in mortality [4].

Although many bacteria are still susceptible to the majority of antimicrobial agents available, a specific group of bacteria can escape the bactericidal action of many antibiotics. This small group consists of Enterococcus faecium, Staphylococcus aureus, Klebsiella pneumonia, Acinetobacter baumanni, Pseudomonas aeruginosa, and the Enterobacter species, and these bacteria are referred to as “the ESKAPE” pathogens [5]. These pathogens are essential for two reasons; they are, first, the causative agents for the majority of nosocomial infections and, second, they are considered as a model of pathogenesis, transmission, and resistance. Once we learn how to control these microorganisms the same strategies could be applied to other species that attempt to take their place [5].

2. Onset of Bacterial Resistance to Antibiotics and its Mechanism of Action

Bacterial resistance to antibiotics began as early as the 1950s, when penicillin resistance became a health concern [6]. The issue was temporarily solved with the introduction of beta-lactam antibiotics [7] but unfortunately this did not last long as the first case of methicillin-resistant Staphylococcus aureus (MRSA) was reported in the United Kingdom as early as 1961 [7]. From the late 1960s to the early 1980s more antibiotics were introduced to the market, but resistance to these drugs hindered their potential. This sadly led to the drying up of the antibiotic pipeline and fewer new antibiotics were subsequently introduced [8]. This factor—along with the misuse, inappropriate prescribing, extensive agricultural use of antibiotics, and regulatory barriers—has led to what is known as the antibiotic resistance crisis [9].

Antibiotic-resistance can be developed by bacteria by three main mechanisms, as illustrated in Figure 1: (i) The inhibition of the entry of antibiotic molecules to their target in the bacterial cells by either decreased permeability or increased efflux. Gram-negative bacteria are inherently less permeable to many antibiotics as their outer membrane is selectively permeable. Additionally, the down-regulation of porins, or their replacement by other more selective ones, hinders the access of antibiotics into the bacterial cells [10]. (ii) Altering antibiotic targets by mutation or posttranslational modification or protection. The modification of the target part by mutation prevents the efficient binding of antibiotic molecules, which allows the bacteria to function normally and thus acquire resistance against the drug. On the other hand, protection or modification of the target structure can happen without any mutations in the encoding genes, and this may also lead to antibiotic resistance [11]. (iii) Resistance by directly acting upon the antibiotics by either hydrolysis or transferring of a chemical group; this is considered the primary mechanism of antibiotic-resistance. One classic example is the penicillinase enzyme degrading penicillin antibiotics. Altering antibiotics by the addition of chemical groups (acyl, phosphate, nucleotidyl, and ribitoyl, etc.) to the active sites is another behavior employed by bacteria to prevent antibiotics from binding to the target as a result of steric hindrance [12][13]. 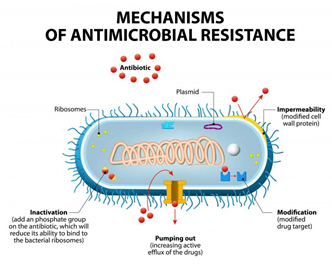 Figure 1. Mechanisms of bacterial resistance to antibiotics (from Designua/Shutterstock.com).

Another big challenge that faces healthcare systems in dealing with bacterial resistance is the formation of biofilms. Biofilms are functional aggregates of sessile microorganisms encased within a self-generated extracellular polymeric matrix composed of polysaccharides, proteins, and DNA [14][15]. The term “aggregate” is used because most cells in multilayered biofilms establish cell-to-cell contact, either in surface-attached biofilms or in flocs, which are mobile biofilms. Through intercellular interactions, both social and physical, together with the properties of the matrix, the biofilms differ considerably from free-living bacterial cells [15]. They possess different architectural, phenotypic, and biochemical properties that give them superiority over their planktonic counterparts in terms of pathogenicity and resistance to antimicrobial agents [16][17]. Due to these facts the search for innovative solutions to bacterial resistance has become a necessity on a global level.

2.1. Bacterial Resistance in Numbers according to Recent Epidemiological Data:

According to the latest annual epidemiological report of antimicrobial resistance in the European Union, EU/EEA (EARS-Net) in 2019 [18], statistics regarding the most commonly reported bacterial species were as indicated in Table 1.: Escherichia coli (44.2%), followed by S. aureus (20.6%), K. pneumonia (11.3%), Enterococcus faecalis (6.8%), P. aeruginosa (5.6%), Streptococcus pneumoniae (5.3%), E. faecium (4.5%), and Acinetobacter species (1.7%). The report showed that in 2019, more than half of the E. coli isolates reported to EARS-Net, and more than a third of the K. pneumoniae isolates, were resistant to at least one antimicrobial group under surveillance, and combined resistance to several antimicrobial groups was frequent.

Table 1. Percentage of reported bacterial species according to the EARS-Net report in 2019 [18].

For S. aureus, a decline in the percentage of meticillin-resistant S. aureus (i.e., MRSA) isolates reported in previous years continued, where it decreased from a percentage of 19% in 2015 to 15.5% in 2019. However, despite this good news, MRSA levels are still high in several countries, and combined resistance to another antimicrobial groups was common. S. aureus is also one of the most frequent causes of blood-borne infections, causing a high burden in terms of morbidity and mortality [19]. A worrying finding in this recent report was the increase in the percentage of vancomycin-resistant isolates of E. faecium in the EU/EEA, from 10.5% in 2015 to 18.3% in 2019. The aforementioned data shows that efforts to combat the antimicrobial resistance phenomena are still in need, despite the promising improvements for controlling some bacterial species. Another point to note is that E. coli followed by S. aureus have the lion’s share of the reported bacterial species, which means that it will be essential for future therapeutics to target both types of bacteria: Gram-positive and Gram-negative.

A number of novel approaches for fighting bacterial resistance are currently being investigated and some have even reached clinical trials. These include anti-virulence approaches which are targeted to inhibit the production or activity of virulence factors (VFs) including toxins, adhesins, quorum sensing (QS) molecules, siderophores, and immune evasion factors [20]. Another attractive strategy is microbiome-modifying therapy, which includes the manipulation and engineering of the human microbiome in order to prevent and resolve infection. This strategy has generated considerable activity in academia and industry [21]. Bacteriophages, also known as phages, have also gained traction in the last 10–15 years as a response to the emergence of multidrug-resistant pathogens. One of the characteristics of phage therapy is its specificity to single bacterial species, and usually to a subset of strains within that species [22]. Noble nanoparticles, such as gold, have also been recognized for their notable anti-biofilm efficacy [23]. Other approaches include immunotherapy, antisense RNA, drug-resistance modulation, and other approaches that have been discussed thoroughly in a recent review by Theuretzbacher U et al. (2019) [20]. In our review we have focused on the latest research on antibacterial gold nanoparticles, with a brief discussion of the different strategies used and their effectiveness in eradicating bacteria.

4. Nanomaterials as a Promising Tool for Eradicating Bacterial Resistance

As traditional drugs and antimicrobial agents fail in some cases to eradicate resistant bacteria and biofilms, the search for new tools is rising worldwide and is becoming a necessity. Several studies indicate that various types of nanomaterials (both organic and inorganic) have demonstrated promising results regarding antibacterial activity. It has also been claimed that the use of nanoparticles is one of the most promising strategies to overcome microbial drug resistance [24].

Nanomaterials are tiny particles with a range of diameter of 1–100 nm. At such a small scale the physicochemical and biological characteristics of these materials are essentially different from their bulk form [25][26]. Due to their high surface and small size effect, nanomaterials are potential candidates for applications in medical imaging, drug delivery, and disease diagnostics [25]. The size of the nanomaterials provides a large surface-area to volume ratio, which allows the binding of a large number of high affinity ligands, equipping nanoparticles with a multivalency in eradicating bacterial cells [27].

There are several mechanisms by which nanomaterials exert their antibacterial properties. These are, as illustrated in Figure 2: (i) direct contact with the bacterial cell wall; (ii) inhibiting biofilm formation; (iii) triggering of both innate and acquired host immune responses; (iv) production of reactive oxygen species (ROS); and (v) initiation of intracellular effects (e.g., interactions with DNA and/or proteins). As nanomaterials do not possess the same mechanisms of action as regular antibiotics they can be of extreme use against multidrug resistant (MDR) bacteria [28]. 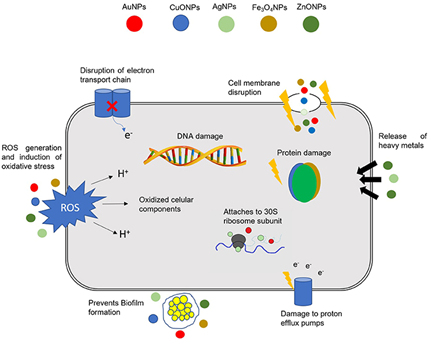 Of the different inorganic nanomaterials that have been researched, photothermally activated nanoparticles with absorption in the visible near-infrared (NIR) region are gaining attention. This is due to their ability to increase the local temperature in the surrounding medium upon irradiation which, consequently, deactivates different types of bacteria [29]. It is also worth mentioning that the NIR light in the so-called “biotransparent window” (750–900 nm) is considered safe for direct in vivo application and causes no damage to normal tissue (provided that irradiance limits are not breached, e.g., not exceeding 0.32 W/cm2 at 800 nm) [30][31].