Neuropathic pain in humans arises as a consequence of injury or disease of somatosensory nervous system at peripheral or central level. Peripheral neuropathic pain is more common than central neuropathic pain, and is supposed to result from peripheral mechanisms, following nerve injury. The animal models of neuropathic pain show extensive functional and structural changes occurring in neuronal and non-neuronal cells in response to peripheral nerve injury. These pathological changes following damage lead to peripheral sensitization development, and subsequently to central sensitization initiation with spinal and supraspinal mechanism involved. The aim of this narrative review paper is to discuss the mechanisms engaged in peripheral neuropathic pain generation and maintenance, with special focus on the role of glial, immune, and epithelial cells in peripheral nociception. Based on the preclinical and clinical studies, interactions between neuronal and non-neuronal cells have been described, pointing out at the molecular/cellular underlying mechanisms of neuropathic pain, which might be potentially targeted by topical treatments in clinical practice. The modulation of the complex neuro-immuno-cutaneous interactions in the periphery represents a strategy for the development of new topical analgesics and their utilization in clinical settings.

Neuropathic pain is defined by the International Association for the Study of Pain as pain caused by a lesion or disease of the somatosensory nervous system [1]. Neuropathic pain (NP) is not a particular disease, but the clinical condition that is caused by a variety of different diseases and lesions, injuring the nervous system at peripheral or central level, resulting in peripheral NP or central NP, respectively. The nerve damage and subsequent functional and structural neuroplasticity in sensory and autonomic nervous system, may become pathological and maladaptive in certain percentage of patients, and the risk of maladaptation depends on biological, genetic, demographic, and psychosocial factors [2]. The nerve damage induces extensive response in immune system as well, resulting in close interactions between nervous and immune system, and finally neuroinflammation. The functional and structural neuroplasticity and complex neuro-immune interactions result in inappropriate signaling from periphery, inappropriate modulation, and disturbed central processing of pain. In clinical practice, chronic neuropathic pain may be thus considered as neuro-immunological disorder with multiple neuronal and non-neuronal mechanism involved, either in periphery or centrally [3][4][5]. In humans, NP features may vary according to the location and character of the nervous system lesion, but it has been suggested that a more peripheral lesion induces more localized signs and symptoms of NP [6]. In 2010, the first definition of localized neuropathic pain was proposed, aiming at description of a special type of NP, which is caused primarily by the injury of peripheral nervous system. Localized neuropathic pain (LNP) is a type of neuropathic pain that is characterized by consistent and circumscribed area(s) of maximum pain, associated with negative or positive sensory signs and/or spontaneous symptoms characteristic of neuropathic pain [7], and is felt in superficial tissues [6]. In patients with LNP, complex peripheral mechanisms following nerve injury are suggested to generate and maintain pain and sensory abnormalities [8]. Thus, there is a rationale for use of topical analgesics, acting locally at peripheral level, which is in line with current principles in pain medicine pointing out at the need of personalized and mechanism-based approach to pain management [9]. Topically applied analgesics are supposed to target the underlying molecular/cellular mechanisms in the periphery only, without systemic mechanisms and site of action. The preclinical data support this idea, but, in clinical practice, only a few of peripheral mechanisms of NP are currently addressed [10][11][12][13][14].

2. Topical Administration of Analgesics in LNP

The concept of topical administration of analgesics in LNP emerged from preclinical and clinical trials, where it has been confirmed that:

Preclinical studies confirmed the role of several ion channels, receptors, enzymes, neurotransmitters, neuropeptides, cytokines and other signalling molecules in peripheral sensitization, inappropriate signalling from periphery and NP behaviour. Evidence for the peripheral mechanisms and their role in NP comes from clinical trials and observations as well, however only a few mechanisms have been directly confirmed in humans:

-in humans with primary erythromelalgia altered firing and ectopic activity in peripheral neurons was observed due to the mutation in gene coding Nav1.7 [20];

-gain-of-function mutation in Nav1.7, Nav1.8 or Nav1.9 coding genes was associated with small fibre neuropathy and other neuropathic and non-neuropathic pain syndromes [21];

Although only a few molecular/cellular mechanisms of NP in humans have been directly confirmed, the preclinical and clinical data support the idea of topical administration of analgesics with different mechanisms of action. Active molecules from topically applied treatments diffuse across the stratum corneum and then penetrate to some extent into the deeper skin layers, where their effect is expected. The molecules of topical drugs act on several distinct ion channels, receptors, or enzymes expressed by either neuronal or non-neuronal cells (Figure 1). The result of this process is the interruption of mutually intensifying stimulation loops, reduction of peripheral sensitization, peripheral input, hyperalgesia, allodynia, and finally reduction of pain intensity in patients with LNP (Figure 2). 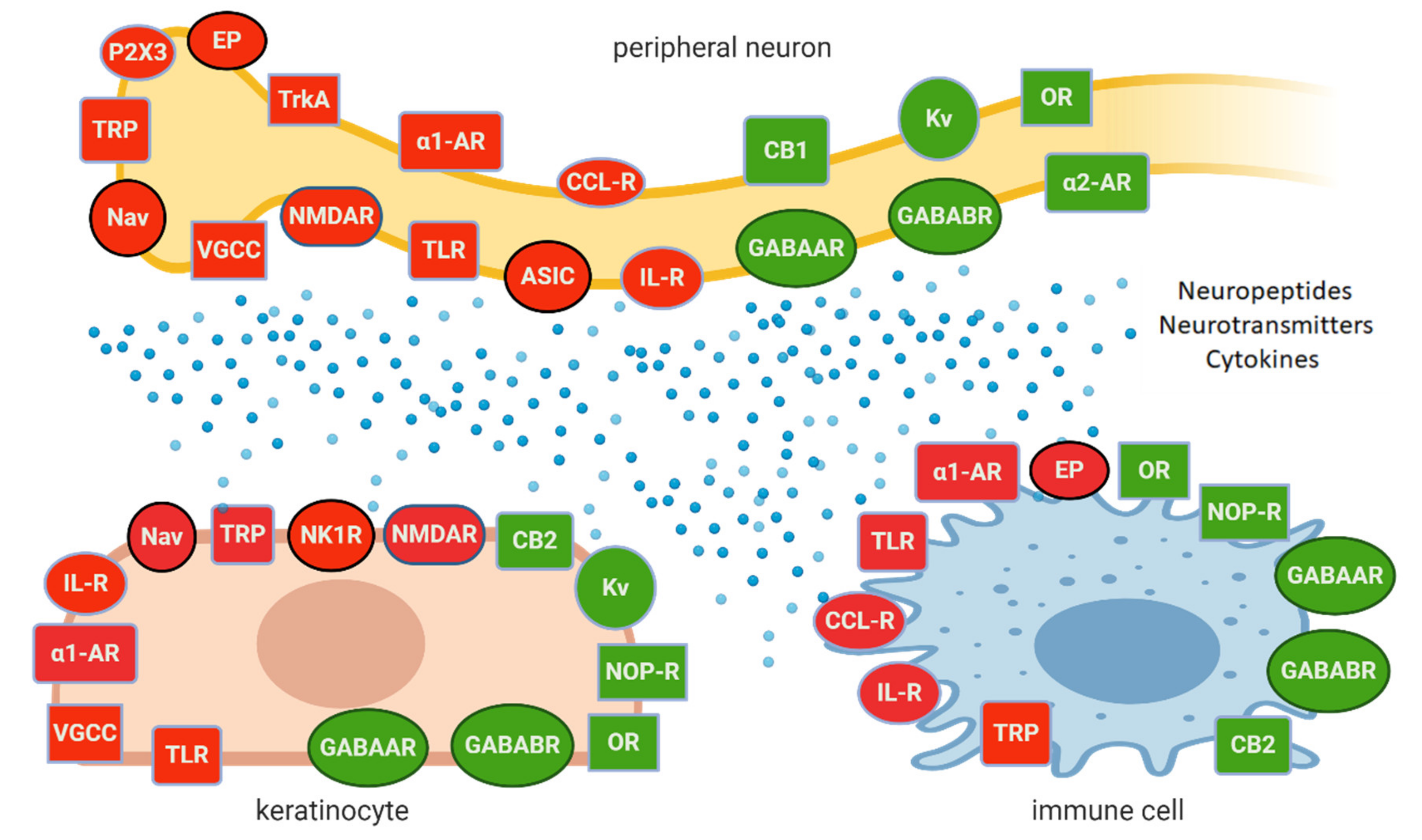 The concept of topical treatments is in line with current theory of mechanism-oriented pain treatment; therefore, they might improve the quality of pain management and patients’ satisfaction with the treatment [9]. According to clinical data, most studied topical treatments (i.e., 5% lidocaine patch, 8% capsaicin patch, BTX-A (botulinum toxin A) in subcutaneous injection) have relatively few systemic side effects and drug–drug interactions compared to systemic drugs. However, according to systematic reviews, topical drugs still have a weak recommendation for use in patients with LNP [27][28]. In clinical practice, numerous other agents have been used topically in patients with LNP, such as capsaicin at low concentration, antidepressants (amitriptyline, doxepin), antiepileptics (phenytoin, baclofen, gabapentin), ketamine, ambroxol, prazosin, clonidine, opioids (loperamide), cannabinoids (cannabidiol), NSAIDs (nonsteroidal anti-inflammatory drugs) (diclofenac, ibuprofen, ketoprofen), blockers of Nav 1.7 (funapide-TV-45070). However, evidence on their efficacy in LNP is inconsistent or inconclusive, therefore they are not included in clinical recommendations [27][28]. In the literature there are numerous preclinical trials pointing out at antinociceptive effect of substances administered topically in animal models of inflammatory and NP. They are not utilized in clinical practice yet and therefore not included in this review [29][30].

The progress made in identification of peripheral mechanisms of NP, peripheral neuronal and non-neuronal cells interplay, and the role of peripheral sensitization in modulation of central hypersensitivity has given a stronger rational basis for topical treatments in clinical practice and experimental research on novel agents. It is accepted that primary sensory afferent neurons, immune cells, and keratinocytes express numerous ion channels and receptors, release signaling molecules in a response of injury, and can be activated or suppressed by a wide range of pro- or antinociceptive mediators, respectively. Modulation of their complex interactions in the periphery represents a strategy for the development of new topical analgesics and their utilization in clinical settings.