Thermal imaging is a promising technology in the medical field, in which infrared (IR) sensors can be used in e-health applications. However, in order to make this technology more accessible, the suitability of low-cost devices for such applications has been evaluated. Low-cost sensors present reduced capabilities compared to more expensive high-end devices. Therefore, their characterization is of outmost interest, which is performed in terms of the following parameters: non-uniformity (NU) effects and correction as well as their dependence on room temperature, noise-equivalent temperature difference (NETD), and response curve stability with temperature. In this work, a good performance is shown for the selected low-cost sensor, especially when used in temperature-controlled environments. Thus, the suitability of such sensors for medical applications is confirmed, proving its efficiency for the particular application we are focused on, this is, the assessment of diabetic foot ulcers.

Thermal infrared sensing technology has experienced much development over the last decades due to a new generation of uncooled infrared (IR) thermal sensors based on microbolometers[1]. These detectors use microelectromechanical system (MEMS) techniques for manufacturing large 2D arrays, reducing the cost while offering a high sensitivity and good image quality[2]. The popularity and applicability of these sensors in multiple fields, both civilian and military, have contributed to the improvement of this technology in terms of noise as well as cost reduction and increased detector size.

Thermal imaging technology has raised significant interest in the medical field, since skin temperature variations can be related to different medical complications such as inflammation, ischemia, or infection[3][4][5]. Thermal imaging provides temperature functional observation as well as tissue structural thermal properties[6]. Applications based on thermography have been proposed for the monitoring and assessment of a diverse range of pathologies including dermatological complications, tumors, diabetic neuropathy, arthritis, vascular disorders, and other circulatory disturbances such as Raynaud’s phenomenon[7][8][9][10][11][12][13]. Furthermore, several applications have employed active thermography in which temperature is measured in dynamic states resulting from thermal provocation (heating or cooling)[14][15][16]. In addition, a number of e-health applications have proposed the use of IR thermography[9][17]. In the case of a diabetic foot, a database already exists to promote early diagnosis for this pathology[18]. The possibility of uploading self-monitoring images to a database has a twofold benefit. First, the subject gets a report if a warning sign is found, and then a publicly available database increases, improving the efficiency of the early diagnosis. Nevertheless, despite the increasing popularity of such applications, clinical thermography has not yet become a commonly used technology. This can be partially explained by the fact that, in most of the proposed applications, the selected sensors are still relatively expensive, bulky, and difficult to handle for patient self-monitoring.

In the last few years, some manufacturers have presented new low-cost, off-the-shelf infrared apparatuses based on microbolometers including the optics and electronics, which are compatible with mobile devices such as phones or tablets. These sensors open a new venue for medical infrared imaging, as they present a competitive potential for home-monitoring applications, facilitating the accessibility and usability of this technology. However, these low-cost models offer reduced capabilities as compared to high-end devices mainly due to the sensor spatial resolution, simpler optics, housing, and electronics.

To the authors’ knowledge, the viability of using low-cost sensors in clinical applications, instead of the high-end microbolometers, as well as the impact of their performance have not been previously studied in detail. Specific low-cost microbolometers have been characterized without comparing them to scientific or industrial-class models nor analyzing the impact of the performance reduction in specific applications[19]. Long-wavelength infrared (LWIR) low-cost cameras have often been analyzed based on the data provided by the manufacturer and a visual inspection of the acquired images[20][21]. Furthermore, specific low-cost LWIR detectors have been characterized focusing on their applicability in areas not related to clinical pathology assessment or monitoring[22][23].

This entry aims to characterize thermal sensors and analyze their feasibility for medical applications, particularly the assessment of diabetic foot anomalies. Several studies have been performed to test the viability of infrared imaging on diabetic complications based on the study of temperatures of the sole of the foot[24][25][26][27]. Before an ulcer is visible, a previous subcutaneous anomaly may cause a local temperature variation on the skin that can be detected with thermal infrared sensors. The assessment procedures can be typically classified into one of the following main groups: independent limb temperature analysis, contralateral temperature symmetry analysis, temperature distribution analysis, and external stress analysis[28]. All these methods require a thermal imager able to provide a medium or good spatial resolution, repeatability and reproducibility of the measurements under different conditions, low noise, and low fixed-pattern noise (FPN). Traditionally, technical requirements for thermographic applications for ulceration risk detection are fulfilled by medium or high-end cameras[9][10][11][29]. Therefore, the main objective of this work was to characterize low-cost microbolometers and compare their performance to a reference high-end thermal camera. These sensors were characterized in terms of non-uniformity (NU) effects together with their dependences on ambient temperature, noise-equivalent temperature difference (NETD), as well as camera response.

This entry aims to characterize a set of selected low-cost infrared sensors (Seek Thermal Compact PRO and Thermal Expert TE-Q1) and compare the manufacturer-provided features with the measured ones. Moreover, the low-cost cameras were compared to a high-end device (INO IRXCAM-640), used as a reference sensor.

An experimental setup, which included a climatic chamber and an infrared radiance source (blackbody), was used to modify the ambient temperature of the sensors as well as to provide a temperature-controlled emitting dark surface.

A simplified detector response model was considered, which depends on the object temperature and its emissivity, the background temperature, the operating wavelength and the optical system at each focal plane array (FPA) pixel. The model also contained the non-uniformity (NU) effects, which were modelled by a pair of matrixes (gain and bias) as described in the corresponding article.

The characterization tests were based on the acquisition of a series of images to calculate the Noise-Equivalent Temperature Difference (NETD) and the non-uniformity (NU) correction. Thre resulting values were validated by estimating the residual non-uniformity (RNU) and its corresponding errors (NU error eNU and peak-to-valley error eP-V). Furthermore, the temporal stability of each camera was evaluated in terms of the response curves of each sensor at varying room temperature. Prior to acquiring images, the cameras were thermally stabilized for a period of 15 minutes.

The acquired and processed (NU correction applied) images for each camera are displayed in Figure 1 as an example. The images were acquired at a distance between the camera and the feet sole in the range from 1 m to 1.2 m. As can be observed, the images show differences in the noise level and the depth of focus of each camera.

Figure 1. Feet images acquired with (a) Seek Thermal CompactPRO (ST), (b) Thermal Expert TE-Q1 Plus (TE-Q1) and (c) INO IRXCAM-640. The corresponding NU correction was applied to these images. The x- and y-axes represent the number of pixels of each sensor. The images are color-coded, indicating temperature in ºC.[30]

The measured NETD values of the evaluated cameras are presented in Table 1. The low-cost cameras provide higher values for the NETD than the ones reported by the manufacturers, showing an increase around 60% and 30% above nominal values for the ST and the TE-Q1 cameras, respectively. Regarding the residuals errors (RNU, eNU and eP-V), after applying the corresponding NU correction, TE-Q1 and INO IRXCAM-640 cameras show similar performance for the eNU and eP-V values (Table 2). However, the ST camera shows worse values in comparison.

The response curves of the tested cameras at varying room temperatures are depicted in Figure 2. The curves show the stability of the INO IRXCAM-640 compared to the other models. The TE-Q1 and ST cameras show significant differences in the measured temperatures. The TE-Q1 also show a linear performance with temperature, which might be due to the manufacturer's internal calibration of the microbolometer. 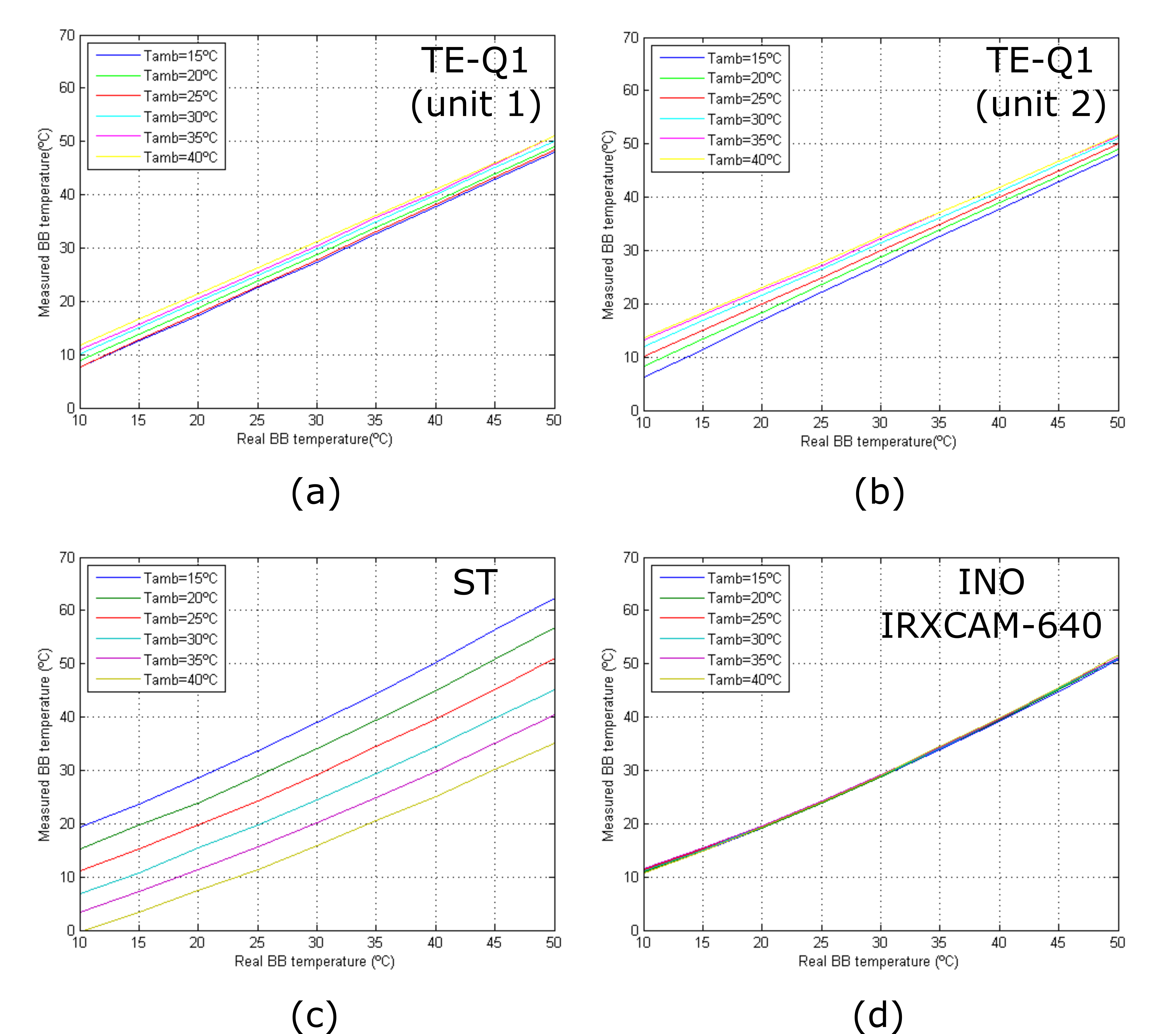 A general overview of the capabilities of a few selected low-cost cameras was performed through sensor characterization. In addition, these sensors were compared to a high-end model. The data included in the manuscript demonstrate that the TE-Q1 low-cost camera can be used in e-health applications. However, a temperature compensation algorithm should be employed when measurements are taken at a non-thermally controlled environment to avoid degradation of the images at extreme room temperatures.