Raman scattering relies on an inelastic photon scattering. In contrast to elastic Rayleigh scattering, inelastically scattered photons have different energy from the incident ones. For many years Raman spectroscopy has not been considered a useful analytical tool because of very low efficiency of the “normal” Raman scattering. Typical total Raman scattering cross-section is only ca. 10−29 cm2 per molecule, whereas typical cross-sections for absorption in ultraviolet and infrared are ca. 10−18 and 10−21 cm2 per molecule, respectively[1]. In 1974 Fleischmann et al. reported a significant growth of the Raman signal measured from pyridine adsorbed on electrochemically roughened (nanostructured) silver substrate[2]. They interpreted this effect as a result of an increase of the surface area of electrochemically roughened silver electrode and hence adsorption of a significantly larger number of pyridine molecules. Three years later two independent research groups found true reasons for the very large growth of the intensity of the Raman signal observed by Fleischmann et al.[2] Jeanmaire and van Duyne[3], and Albrecht and Creighton[4] connected very strong Raman signal observed for pyridine adsorbed on nanostructured Ag surface with the increase of the efficiency of Raman scattering. The observed effect was called SERS (surface-enhanced Raman scattering). As mentioned above, the increase of the efficiency of Raman scattering for molecules being in the close proximity to the plasmonic nanoparticles is mainly due to the increase of the intensity of the electromagnetic field

The total SERS enhancement is proportional to the fourth power of the local electromagnetic field (Equation 1).

It was found that while irradiating nanoprism using radiation with the wavelength of 770 nm the highest field enhancement around nanoprism (over 22 times) is observed at the tips of the nanoprism. While irradiating using radiation with a wavelength of 460 nm the highest enhancement occurs at the middle of the triangle's sides opposite to the triangle's edge, but this enhancement is much smaller than the enhancement at tips when using 770 nm radiation[6]. This behavior is due to the possibility of the excitation in nanoprisms of various plasmonic modes. Nanoprisms of all kinds have four plasmon resonance peaks: out-of-plane quadrupole, in-plane quadrupole, in-plane dipole, and weak out-of-plane dipole. When 770 nm radiation is used for excitation of surface plasmons the distribution of electric field outside the nanoprism is similar to this obtained from dipole excitation in spherical nanoparticles while for excitation with 460 nm radiation the distribution of the electromagnetic field outside the nanoprism is similar to the distribution of the electromagnetic field due to the quadrupole excitation in spherical nanoparticle[6]. 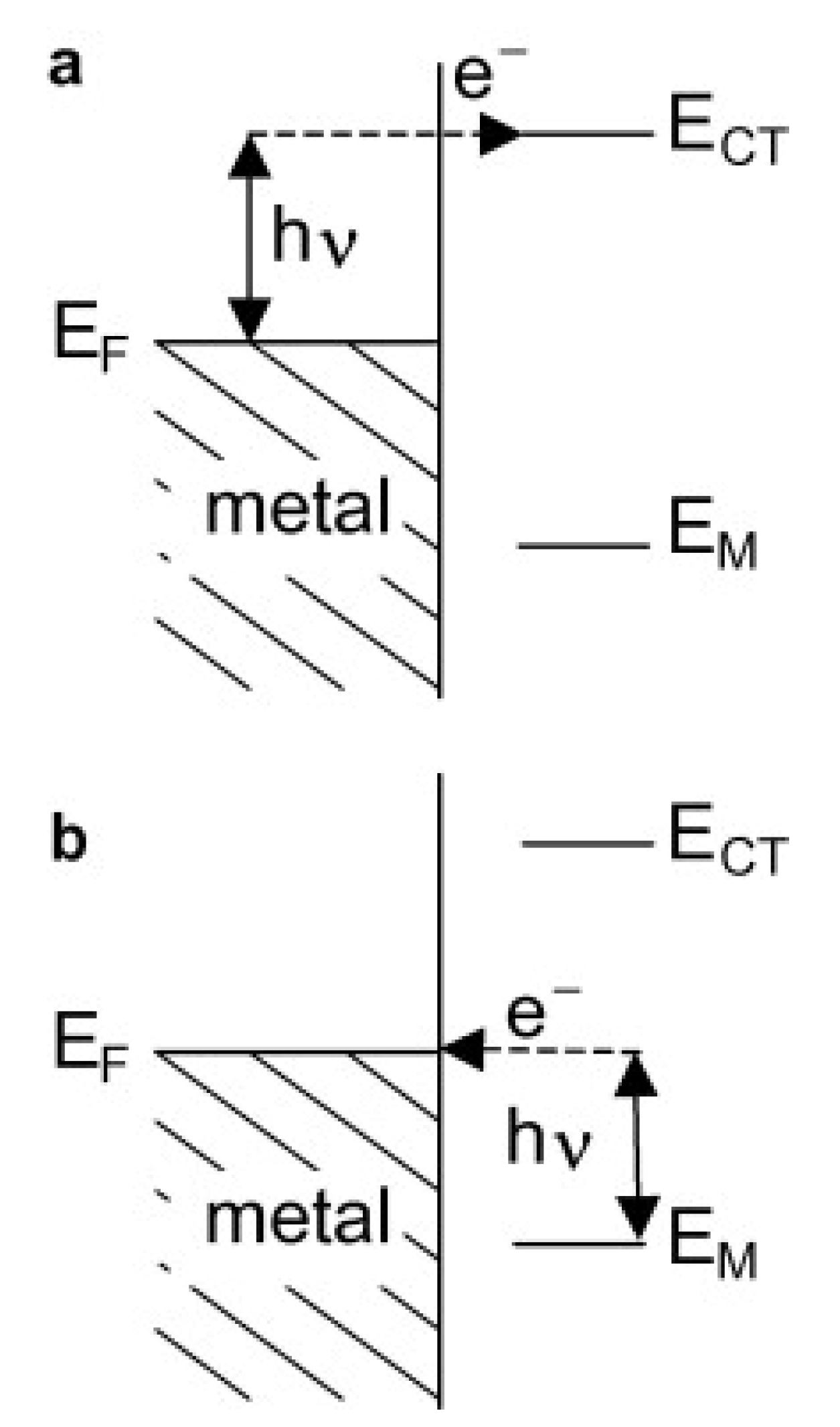 Figure 2. Schematic illustration of the energy levels involved in the charge transfer (CT) mechanism of the surface-enhanced Raman scattering (SERS) enhancement; hν—photon energy, EF—Fermi level energy, ECT—energies of occupied and unoccupied levels of the adsorbed molecules. (a) The electrons at the Fermi level of the metal are virtually excited into unoccupied molecular orbitals of the adsorbed molecule and back to the metal, (b) the electrons at the highest occupied molecular orbital can be virtually excited into the Fermi level of the metal and back to the adsorbed molecule. Reproduced with permission[12]. Copyright, 2009, Elsevier.

The enhancement of the SERS spectrum in relation to the normal Raman spectrum determines how big enhancement material can provide for the molecule under study. The enhancement factor is given by the formula (Equation 2):