Transient receptor potential (TRP) channels have emerged as key molecular identities in the sensory transduction of pain-producing stimuli. The ability of nociceptors to behave as noxious stimuli detectors relies on the presence of specialized transducing molecules at their peripheral nerve terminals capable of transforming the harmful physical (thermal and mechanical) and chemical stimuli into generator potentials. Upon nerve terminal stimulation, the output signal conveying to the central nervous system depends on the properties of transducer channels which produce generator potentials. Voltage-gated channels subsequently translate it into action potential firing. Nociceptive TRP channels are among the most studied transducer channels expressed in nociceptors and play a pivotal role in the study of pain.

In mammals, environmental information is predominantly relayed by peripheral neurons of the somatosensory system. Such neurons are cellular sensors, transforming mechanical, thermal, and chemical stimuli into electrical signals that progress to the central nervous system (CNS) as action potentials [1]. Sensory neurons in mammals are pseudo-unipolar, possessing a single axon with two distinct branches: the peripheral branch which extends and innervates the target organs such as skin, viscera, and mucosae, and the central branch which relays the collected information to second-order neurons of the CNS in the spinal dorsal horn or brainstem sensory nuclei [2]. The cell bodies of primary sensory neurons innervate the body group together in segmental order in dorsal root ganglia (DRGs), which are found lateral to the spinal cord (Figure 1a). Primary sensory neuron cell bodies, which innervate the head and face, cluster in the trigeminal ganglia (TG) juxtaposed to the brain [3] (Figure 1b). 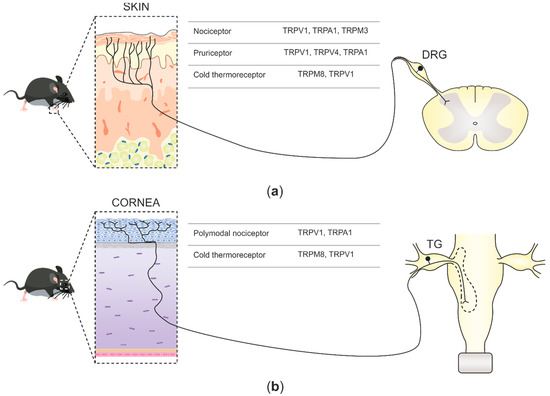 Figure 1. Schematic illustration depicting somatosensory innervation and their projections to the central nervous system (CNS). (a) Somatosensory nerve endings innervating the skin project to the dorsal horn second-order neurons in the spinal cord. Three functional types of sensory neurons innervating the skin are represented along with the transient receptor potential (TRP) channels expressed. (b) Corneal somatosensory nerve endings densely populate the corneal epithelium, reach the trigeminal ganglia (TG) through the ophthalmic nerve, and project, together with other primary nociceptive neurons innervating the face, to second-order CNS neurons at the spinal part of the trigeminal nuclei in the brainstem. Two functional forms of corneal sensory neurons and the TRP channels that they express are represented.

The ability of nociceptors to behave as noxious stimuli detectors relies on the presence of specialized transducing molecules at their peripheral nerve terminals capable of transforming the harmful physical (thermal and mechanical) and chemical stimuli into generator potentials [4][8]. Upon nerve terminal stimulation, the output signal conveying to the CNS depends on the properties of transducer channels such as transient receptor potentials (TRPs), acid-sensing ion channels (ASICs), Piezo, and TACAN [9][10][11][12][13][14][15], which produce generator potentials. Voltage-gated channels subsequently translate it into action potential firing. TRP ion channels are among the most studied transducer channels expressed in nociceptors and play a pivotal role in the study of pain [4].

Several members of the TRP family have been identified as primary molecular transducers on nociceptive nerve fibers. Based on their sequence homology, the mammalian TRP superfamily is comprised of six subfamilies with 28 cation-permeable channels organized as canonical (TRPC), vanilloid (TRPV), ankyrin (TRPA), melastatin (TRPM), polycystin (TRPP), and mucolipin (TRPML) [16]. Overall, this TRP superfamily of channels is involved in multiple physiological and pathophysiological processes, however, based on their ability to transduce specific physical and chemical noxious stimuli, only a few members belonging to TRPV, TRPA, and TRPM families have been classified as nociceptive TRPs [17].

TRPV1 is the first identified and most well-characterized as the molecular entity underlying the detection of capsaicin in sensory neurons, the pungent ingredient in hot chili [18]. Besides capsaicin, TRPV1 can be activated by a large number of physical and chemical stimuli such as noxious temperature (>42 °C), pungent plant products, low pH, and animal toxins. Moreover, TRPV1 possesses the ability to integrate distinct noxious stimuli at the protein level, archetypal of a polymodal receptor channel [19]. In the peripheral nervous system, TRPV1 is mainly expressed in small- and medium-diameter nociceptive neurons from DRG and TG, such as peptidergic and non-peptidergic C-fibers, as well as in Aδ-fibers [20][21].

TRPA1 is the sole mammalian member of the TRPA subfamily associated with pain transduction and, similarly to TRPV1, behaves as a polymodal receptor by integrating, at the molecular level, the transduction of distinct types of noxious stimuli. It is expressed in small-diameter DRG and TG sensory neurons that, in addition, co-express characteristic nociceptive markers such as TRPV1, substance P, and/or calcitonin gene-related peptide (CGRP) [22]. These features, along with activation by temperatures below 18 °C, suggest that TRPA1 acts as a noxious-cold detector in nociceptive sensory neurons [23][24]. Some studies report prominent noxious-cold-sensing impairments of TRPA1-knockout mice [25], whereas others do not find a distinct phenotype in cold-sensing behaviors [26][27]. Recent evidence points toward the role of TRPA1 in sensing acute noxious heat [28][29]. TRPA1 can also be activated by a plethora of irritants and injurious compounds, including allyl isothiocyanate found in mustard oil and wasabi [23][30], nicotine [31], bacterial endotoxins [32], or reactive oxygen species (ROS) [33][34][35], which are fundamental for tissue damage and cellular stress signaling. The vast spectrum of potentially harmful stimuli that activate TRPA1 has led to the notion that TRPA1 acts as a molecular sensor for cellular stress and tissue damage [36].

TRPM3 is a noxious heat-activated channel expressed in a large subset of DRG and TG sensory neurons along with nociceptors [37]. Its activation threshold is slightly shifted towards higher temperatures in comparison to TRPV1 and can also be activated by the neurosteroid pregnenolone sulfate or the more effective synthetic agonist, CIM0216 [38]. Mice lacking TRPM3 channels display an impairment in evasion behaviors to noxious heat as well as in the development of heat hyperalgesia [37]. Likewise, pharmacological blockade of TRPM3 produces a deficit in noxious heat sensitivity in mice [39]. Interestingly, ablation of TRPV1 and TRPM3 genes does not completely suppress the avoidance behavior to noxious heat, indicating that additional detection mechanisms must exist. Only when TRPV1, TRPM3, and TRPA1 are deleted do mice completely lack acute noxious heat responses to avoid burn injury in the tail-immersion assay [28]. Recent work has revealed that TRPM2 underlies residual heat responses (above 45 °C) in dissociated primary sensory neurons. Its role in noxious heat-sensing in vivo needs yet to be elucidated [40][41][42].

TRPM8 was the first characterized thermo-TRP channel activated by cold, as its conductance sharply increases as temperature drops [43][44]. Simultaneously, it was found to be activated by natural compounds known for evoking "fresh" sensations, such as eucalyptol, menthol [44], and the more potent agonist icilin. TRPM8 is expressed in a subpopulation of Aδ- and C-fibers emanating from DRG and TG small-diameter sensory neurons [43]. Several functional assays established that around 20% of DRG TRPM8-expressing neurons also responded to the TRPV1 agonist capsaicin despite not demonstrating expression of CGRP or substance P, known markers for nociceptor identity. Strikingly, this proportion is raised to 45% in TG TRPM8-positive neurons innervating the cornea, while the majority of them also expressed substance P [45]. Shortly after the first characterizations of TRPM8-null mice, it was solidly understood that the TRPM8 ion channel is a central protagonist in mild cold thermosensation [46][47][48].