Two-dimensional (2D) nanomaterials have attracted increased interest and exhibited extended applications from nanotechnology to materials science, biomedicine, tissue engineering, as well as energy storage and environmental science. With the development of the synthesis and fabrication of 2D materials, a new family of 2D materials, metal carbides (MCs), revealed promising applications in recent years, and have been utilized for the fabrication of various functional 2D and three-dimensional (3D) nanomaterials for energy and environmental applications, ascribing to the unique physical and chemical properties of MCs. In this review, we present recent advance in the synthesis, fabrication, and applications of 2D and 3D MC-based nanomaterials. This work provides useful information on the preparation, hybridization, structural tailoring, and applications of MC-based materials, and is expected to inspire the design and fabrication of novel and functional MXene materials with improved performance.

Two-dimensional (2D) materials such as graphene, transition metal oxides (TMO), transition metal dichalcogenides (TMD), and other have been widely studied in the last few decades [1][2][3]. Compared to transitional zero-dimensional (0D) and one-dimensional (1D) nanomaterials, 2D materials exhibited unique properties and advantages due to their atomic layer thickness, large surface area, high electrical conductivity, strong mechanical strength, and flat nano/micro-scale surface, which making them excellent candidates for the design and fabrication of multifunctional nanomaterials towards applications in energy science, [4][5] environmental science, [6] electronic devices, [7] sensors, [8][9] tissue engineering, [10] biomedicine, [11] and many others. Recently, more and more attentions have been attracted onto one of the members of 2D materials family, MXenes, which include typical emerging class of 2D transition metal carbides (MCs) and metal nitrides (MNs) [12][13][14]. It has been found that 2D MCs and MNs have similar physical, chemical, and biological properties to that of graphene-like 2D materials. In addition, MCs and MNs have the surface functional groups of -O, -OH, and -F, as well as the elements of C or N, making them not only easy to modify with surface chemistry, but also high potential as electrode materials in catalysis, batteries, supercapacitors, and sensors [15][16][17][18].

To improve the functionalities of MCs and extend their applications, various strategies have been utilized to tailor the properties, hybridization, and structures of MC-based materials. For instance, the surface functionalization of MC with -F, -OH, and -O groups has been proved to an effective way to create novel electronic and magnetic properties of 2D transition MCs and -MNs [19]. Wang et al. demonstrated the modification of titanium carbide (Ti3C2) with chimeric peptides, which could be served as a good biosensor platform for detecting the activity of enzymes [20]. Besides the surface, MCs can be hybridized with other nanoscale building blocks such as nanoparticles, [21] quantum dots, [22] carbon materials, [23] and others to enhance the material properties through synergistic effects. In addition, the functional tailoring of MC-based nanomaterials could be achieved by adjusting the structures of materials from 2D nanosheets, films, and membranes to 3D scaffolds, hydrogels, and aerogels [24][25][26]. Previously, great achievements on the synthesis, functionalization, and applications of various MC-based nanomaterials, and a lot of very important reviews have been released [27][28][29][30][31]. For instance, Yan et al. presented a comprehensive review on the synthesis of nanostructured metallic transition metal carbides, nitrides, phosphides, and borides for the applications in energy storage and conversion, in which more attentions were focused on developing new strategies to improve electrochemical performances of nanostructured 2D materials [28]. Li and Wu summarized recent progress of 2D transition MCs and their nanocomposites for the applications of photo/electrocatalysis and conventional heterogenous catalysis ascribed to the adjusting of the chemical, electronic, and mechanical properties of MCs [30]. Very recently, Shahzad and co-workers demonstrated recent advance in the using of 2D transition MCs for electrochemical sensing of diverse types of heavy metals, dyes, small molecules, and biomolecules as well as biomarkers [32].

By studying the above literatures, we found that it is necessary to contribute additional information on the fabrication of 2D and 3D MC-based materials by different techniques and strategies, which will provide effective guiding for readers to understand the fabrication of functional MC materials for advanced applications. In addition, the presentation of MC-based 2D and 3D materials for energy and environmental applications will inspire the design and preparation of novel MXene materials beyond MCs and promote their applications in materials science, nanotechnology, tissue engineering, biomedical engineering, and other corresponding fields. For this aim, in this work we summarize recent progress on the synthesis, structural fabrication, hybridization, as well as energy and environmental applications of MC-based 2D and 3D nanomaterials, and the main contents are shown in Figure 1. 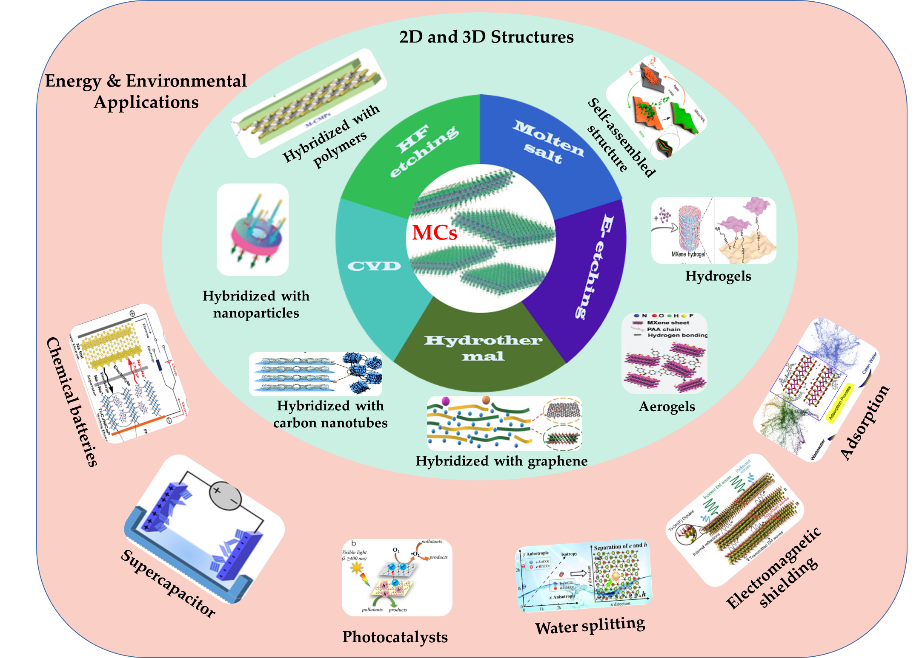 We demonstrated recent progress in the synthesis, structural preparation, hybridization, energy and environmental applications of MC-based 2D and 3D nanomaterials. MCs have excellent mechanics, magnetism, electronic properties, and distinct 2D layered structure with adjustable components and abundant functional groups on the surface, and therefore exhibited promising applications in various fields. By properly controlling and adjusting the structure and components of MC-based materials, 2D and 3D hybrid materials with excellent properties could be obtained.

However, compared to other 2D materials such as graphene and TMD/TMO materials, the extended applications of MCs have some limitations, and more efforts should be done in the future. First, the price of MCs is relatively high and not easy to synthesize, which inhibited their applications in practical applications. It is necessary to develop highly effective strategies to synthesize MCs with unique structure and controlled physical and chemical properties. Second, the preparation of MCs usually needed toxic chemicals in the synthesis process, which in some ways caused environmental problems. To overcome this problem, it is better to utilize green methods to prepare MCs. For this aim, simple and environmentally friendly hydrothermal methods through MC precursors could be a potential solution. Third, the development of surface modification methods for improving the stability, dispersity, and biocompatibility of MCs should be carried out. The addition of small molecules and biomacromolecules to MCs could be a potential way to achieve this aim. For instance, the conjugation of functional biomolecules such as DNA, proteins, peptides, and even self-assembled bio-nanostructure with MCs will extend their applications in biosensing and biomedical fields. Fourth, single atoms could be considered to create on the surface of MC materials to improve catalytic performance of MC-based hybrid materials via synergistic effects and single atomic catalysis, which will promote the fabrication of high-performance batteries and supercapacitors. For instance, single metal atoms like Pt, Ru, Zn, and others could be anchored onto the 2D surface of MCs to enhance their applications in energy storage devices and electrochemical catalysis materials. Fifth, deeper studies on the fabrication of 2D and 3D MC-based materials for environmental applications should be done. For instance, the effects of porous structure and surface properties of materials on the adsorption and removal of contaminations, as well as corresponding mechanisms should be investigated. Last but not the least, while MCs and their composites have exhibited superior features as energy storage and electromagnetic shielding materials, more efforts should be focused on further improving the specific performances, i.e., mechanical strength, flexibility, electrical and chemical activity, as well as cycle stability and lifetime, of the electronic devices that employs MCs, for instance, the incorporation of functional materials and/or the exploration of novel synthetic approaches, making them competitive or even replaceable to those conventional inorganic/organic materials.