Stroke is one of the major culprits responsible for morbidity and mortality worldwide, and the currently available pharmacological strategies to combat this global disease are scanty. Cation-chloride cotransporters (CCCs) are expressed in several tissues (including neurons) and extensively contribute to the maintenance of numerous physiological functions including chloride homeostasis.

The family of cation-chloride cotransporters (CCCs) comprises the Na+-K+-Cl−, Na+-Cl−, and K+-Cl− cotransporters (NKCCs, NCC, and KCCs). Identification of these CCCs in several tissues such as red blood cells, epithelia, and neurons have alluded to their extensive contributions to ion and water homeostasis, both at a cellular and trans-epithelial level [1][2][3]. The identification of the functional properties of most of these transporters dates back to the late 1970s and early 1980s as Cl−-dependent cation fluxes, with red blood cells and Ehrlich ascites tumor cells constituting pivotal model tissues [4][5][6][7]. Subsequently, their molecular identities were established about a decade afterwards [8][9][10]. CCCs are intrinsic membrane proteins that move Na+, K+, and Cl- ions across plasma membranes in a tightly coupled electroneutral manner. They facilitate secondary active transport driven by the gradients generated by the Na+/K+-ATPase [11]. The solute carrier family 12 (SLC12) of the CCC family consists of nine members [2]. A group of three Na+-dependent inward cotransporters comprises of one Na+-Cl- cotransporter (NCC)—its sole isoform is found in the kidney and encoded by SLC12A3 [9] and two Na+-K+-Cl- cotransporters isoforms (NKCC1 and 2)—NKCC1 is ubiquitous whilst NKCC2 is specifically expressed in the kidney and are encoded by SLC12A2 and SLC12A1, respectively [2]. Na+-independent outward transport of K+ and Cl- is facilitated by four K+-Cl- cotransporters with distinct functional properties (KCC1 [12], KCC2 [13], KCC3, and KCC4 [14][15]). The KCC isoforms are encoded by SLC12A4–7 respectively, of which SLC12A5 (KCC2) is found exclusively in neurons [2]. The additional SLC12 family members, CCC9 and CCC-interacting protein (CIP), are encoded by SLC12A8 and SLC12A9, respectively, and have no physiological role ascribed to them yet [16], though recent genome-wide association studies found novel SLC12A8 variants may be associated with dyslipidemia [17], and SLC12A9 may be involved in feather pecking and aggressive behavior [18] (see Table 1).

All proteins in the CCC family have common functional characteristics. These include (1) the coupled transport of one cation (Na+ and/or K+) per individually transported anion, hence the appellation of electroneutral cotransporters, (2) chloride is always the transported anion, (3) all cotransporters are modulated by variations in cell volume, (4) changes in the intracellular chloride concentration ([Cl-]i) influence the modulation of their expression, and (5) the regulation of CCCs activity is achieved through phosphorylation and dephosphorylation processes [19]. The functional and structural characteristics of the Na+ dependent and Na+ independent branches clearly distinguish the two. The degree of identity amongst the Na+ dependent transporters and the Na+ independent are 50% and 70% respectively. Between the two NKCC isoforms, the degree of identity is 25% [20].

Stroke is one of the major culprits responsible for global death and disability [21]. Currently, there is a paucity of pharmacological strategies to reduce the mental damage as well as the burden triggered by this pathology. Ischemic stroke is the most common type of stroke, which accounts for approximately 85% of the cases of the pathology [22]. Ischemia is the disruption of blood flow and the subsequent depletion of oxygen and glucose. As neuronal components strictly function on aerobic metabolism [23], an ischemia in the brain leads to reduced available ATP levels and ionic imbalance across the neuronal cell membrane [24], which causes irreversible neuronal death, also known as ischemic stroke [25][26][27]. During this process, an imbalance of excitatory glutamate and inhibitory gamma amino acid butyric acid (GABA) further accelerate neuronal demise [28][29][30], subsequently leading to the onset of post-stroke seizures [20][31][32]. Neuronal cells excitation is opposed by inhibitory GABA through the activation of GABAA receptors. The activation of the GABAA receptors is dependent on the chloride transmembrane gradient [23]. Notably, CCCs are the primary regulators of chloride homeostasis in the brain [2][33]. This role is accomplished through the extrusion of Cl- via KCC2 and entry of Cl- via NKCC1 which regulates [Cl-]i. GABA is inhibitory as a result of lower [Cl-]I, driven by higher expression of KCC2. Interestingly, immature neurons express less KCC2 and more NKCC1 leading to a higher [Cl-]i and excitatory GABA. The switch from excitatory to inhibitory during neurodevelopment, a process termed excitatory-to-inhibitory GABA switch, is generated through reduction in NKCC1 level and increase in KCC2 level [34]. The expanding work on CCC influence on neuronal excitability in physiological conditions especially during development and pathological conditions suggest that they could be a new treatment approach for stroke [27].

In view of this, constant updates on the role of CCCs in stroke and their regulation is highly germane for the development of therapeutic drugs in the management of this pathology. Thus, the aim of this review is to summarize the current understanding of functional regulation of the CCCs and particularly the role of NKCC1 and KCC3 cotransporters in the pathogenesis of stroke. Then, the regulatory role of the with-no-lysine kinase (WNKs) family and STE20/SPS1-related proline/alanine rich kinase (SPAK) or oxidative stress response kinase (OSR1) (WNK-SPAK/OSR1) signaling pathway in stroke will be considered. Lastly, current pharmacological treatments for stroke with respect to potent inhibitors of WNK-SPAK/OSR1 pathway and NKCC1 cotransporter, and activators of KCC3 transporter will be discussed in this review.

Undoubtedly, for a cell to function properly it is essential to maintain constant intracellular ionic milieu [53]. Homeostasis of [Cl−]i in particular, influences the movement of fluid across epithelia, the polarity of GABA, and more. The electroneutral CCCs are critical determinants of [Cl−]i [53][60]. The [Cl−]i gradient across the neuronal membrane is crucial for controlling the polarity of GABAergic signaling. GABAA conducts Cl− ions. The direction of Cl− movement through GABAA, which determines whether it is excitatory or inhibitory, is dependent on the [Cl−]i gradient. Entry of Cl− through GABAA results in the hyperpolarization of neurons and the extrusions of Cl- through GABAA depolarizes the neurons [23][61][62][63]. Changes in expression levels of the CCCs during development reverses the chloride gradient in neurons, generating a switch from an excitatory GABA to an inhibitory GABA [23][64]. NKCCs facilitate Cl− movement into the cell, while KCCs facilitates Cl− movement out of the cell. Thus, NKCCs promote an increased participation of [Cl−]i in the pathways for regulatory volume increase (RVI), while the KCCs promote decrease in the [Cl−]i as one of the regulatory volume decrease (RVD) mechanisms [19][53][65] (Figure 1). These evolutionarily conserved transporters are amongst the most important mediators of ion transport in multicellular organisms, with particular importance in mammalian central nervous system (CNS) regulation of ionic and water homeostasis [66]. As mentioned earlier, the CCCs are involved in several important cellular functions such as trans-epithelial ion transport, cell volume regulation, and maintenance of [Cl−]i. Their importance in physiological function is evident by the many human Mendelian disorders of the brain and renal phenotype that arise due to mutations in some members of the CCC family and their upstream regulators [19] (Table 1). For instance, reduction in neuronal KCC2 activity results in decreased inhibition and a hyper-excitable network, a feature shared amongst numerous neurological disorders including epilepsy, autism, post-surgical complication, neuropathic pain, and neuropsychiatric disorders [48][53][67][68]. 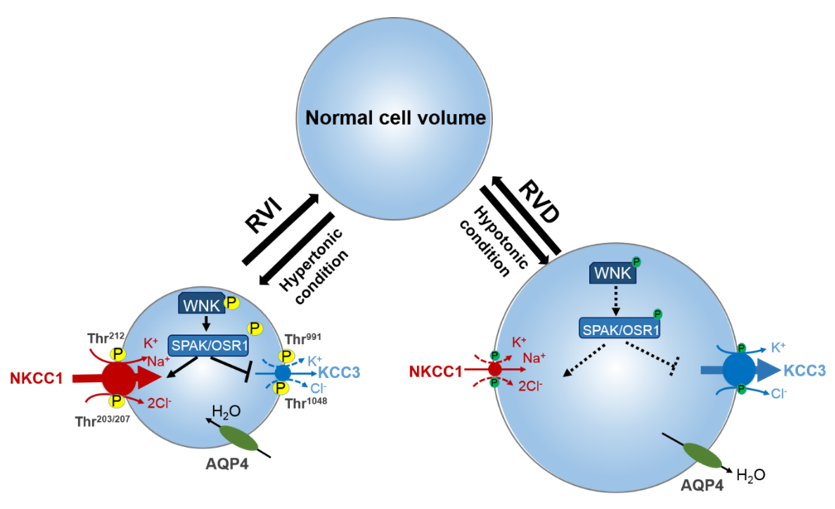 Since CCCs are key players in several important cellular functions and principally responsible for reciprocal cations (Na+ and K+) exchange with Cl- to maintain cellular balance, regulatory mechanisms are crucial to coordinate their activity [53][60][67][69]. Indeed, several kinases and phosphatases regulate their transport activity. However, previous reports have established that members of the WNKs family and their downstream targets, SPAK and OSR1, are the master regulators of CCCs activity [1][53][60][65][70][71][72][73][74][75].

Though it has been appreciated for some three decades that protein phosphorylation coupled with external osmotic environment are crucial components in regulation of CCC activities [2][54][76][77][78][79][80], knowledge on the enzymes that regulate these signaling networks was sparse then. The WNK family encoded by the genes WNK1–4 [81], SPAK, and OSR1 play crucial roles in the regulation of cell volume homeostasis through the regulation of intracellular Na+, K+, and Cl- [53][82]. The many roles of the WNK-SPAK/OSR1-CCC pathway which include cell volume homeostasis, epithelial transport, and GABA signaling are associated with an array of pathologies which include essential hypertension, cerebral edema, anemia, and neuropathic pain [1][19][53][60][65][67][71][73]. In response to osmotic stress of low [Cl−]i, isoforms of WNK are activated through phosphorylation. The WNK isoforms then phosphorylate the related downstream kinases SPAK and/or OSR1 [83][84]. Activated SPAK and/or OSR1 phosphorylates the CCCs, which activates NCC, NKCC1, and NKCC2 but inhibits KCCs through a reciprocal regulatory mechanism [67][72] (Figure 2). The counter regulation of the CCCs coordinates Cl- movement across the membrane to maintain Cl- homeostasis and circumvent superfluous energy utilization [65].

Specific conserved carboxyl-terminal (CCT) domains on SPAK/OSR1 interact with NKCC1 and KCCs [80][86][89]. The Arg-Phe-Xaa-Val/Ile (RFXV/I) domain located in the N-terminal of NKCCs and KCCs is able to recognize the SPAK CCT domain (Figures 3 and 4). Interestingly, a subtype of the KCC2 isoform, KCC2b lacks the RFXV/I motif to facilitate interaction with SPAK. Thus, only KCC2a transport activity decreased when SPAK was overexpressed [53][90]. This interaction of SPAK/OSR1 with both the upstream WNKs and downstream CCCs is crucial for coordinating CCC cellular activity in various osmotic conditions [89][91]. The binding of WNK to SPAK/OSR1 allows for the phosphorylation of residues in the T-loop of the SPAK catalytic domain required for SPAK activation [89][91]. Only once activated is SPAK then able to phosphorylate and inhibit KCC2 and KCC3 at Thr1048 and Thr1007 respectively and activate NKCC1 at Thr203/Thr207/Thr212. These processes are essential in response to cellular shrinkage and hypertonicity (Figure 1) [53]. In hypertonic conditions, SPAK/OSR1 phosphorylation and activation of NKCC1 is key to achieve RVI [53][67] as an influx of Na+, K+, Cl- through the NKCC1 along with water will allow for cell volume recovery (Figure 1). Under hypotonic extracellular conditions, water enters the cells and causes cell swelling, subsequently triggering a counter-volume regulation response (RVD). The WNK-SPAK/OSR1 pathway in this condition remains inactive and inhibits NKCC1 activity (Figure 1). Furthermore, the dephosphorylation of KCCs mediated by phosphatase stimulates KCC activity and causes efflux of K+ and Cl- along with water, decreasing cell volume (Figure 1) [65]. Thus, pharmacological or genetic antagonistic events of WNK-SPAK/OSR1 will lead to a [Cl-]i efflux coupled through simultaneous dephosphorylation of NKCC1 and KCCs. This will then mitigate energy failure occasioned by osmotic stress, as evident in some neurological disturbances such as cerebral edema [32][65][67][86][92]. 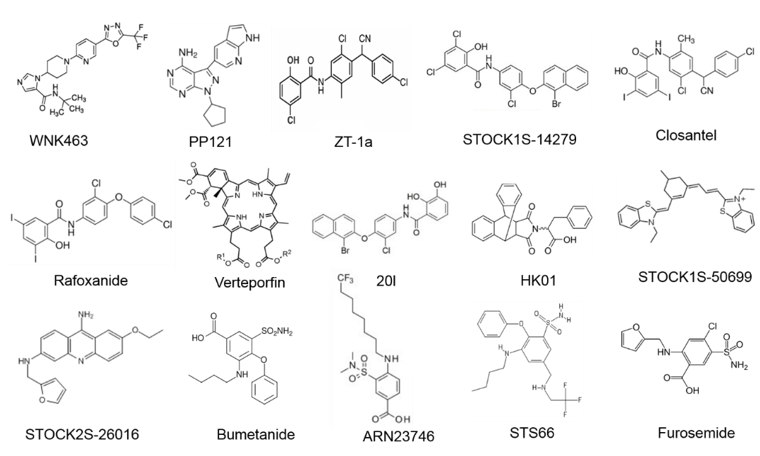 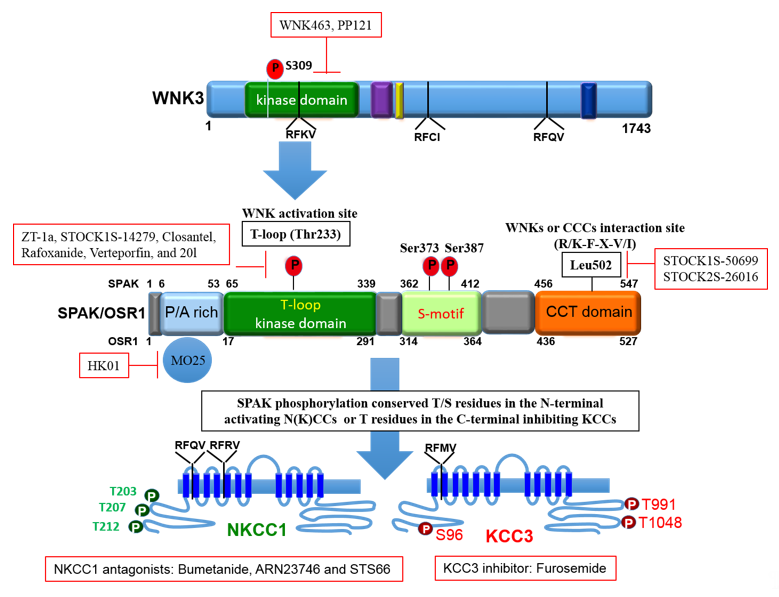 2. Role of NNKCC1 in Stroke

NKCCs play crucial roles in regulating neuronal functions. They are abundantly expressed in neurons throughout the brain and are involved in ion homeostasis maintenance and neuronal excitatory functions [93]. Majorly, they function in regulation and repair of nerve injury through GABAergic signaling [1][94]. However, under specific conditions such as cerebral ischemia, the expression of NKCCs can be altered [94]. Overstimulation of NKCC1 and other major glial ion transporters (such as Na+/H+, Na+/Ca2+ and Na+/HCO3- exchangers) can contribute to glial apoptosis, inflammation, demyelination, inflammation, and excitotoxicity [26]. This cascade of events is involved in the development and progression of neurological diseases such as stroke [26]. Studies have demonstrated evidence of increase NKCC1 expression in neurons, a phenotype resembling immature neurons, following an ischemic stroke [95][96][97]. The altered NKCC1 expression observed post stroke may be responsible for the increased in Na+ and Cl– levels in neurons leading to a GABA-mediated depolarization. These events also contribute to a hyper-excitable neuron and cell swelling occasioned by cerebral ischemia [95][98]. Furthermore, disrupted endoplasmic reticulum Ca2+ homeostasis [99] and elevated extracellular levels of potassium, glutamate, interleukin-6 [100], interleukin-18 [101], interleukin 1β, and tumor necrotic factor-α [102] which happen during/post cerebral ischemia have been shown to stimulate NKCC1 mRNA gene expression in both neurons and astrocytes. Notably, the elevated extracellular potassium levels seems to be Ca2+-dependent as NKCC1 activation is completely terminated either through the removal of extracellular calcium or using Nifedipine to block L-type voltage-dependent calcium channels [103]. Comparatively, similar effects were seen in the expression of NKCC1 mRNA gene in white and gray matter of mutant and wild-type (WT) mice [104]. In addition, [105] an epigenetic study using quantitative real-time RT-PCR technique on cortical slice culture from rats suggested that DNA methylation/demethylation contribute to the regulation of NKCC1 expression during postnatal development and in response to neuronal injury (ischemia) [105].